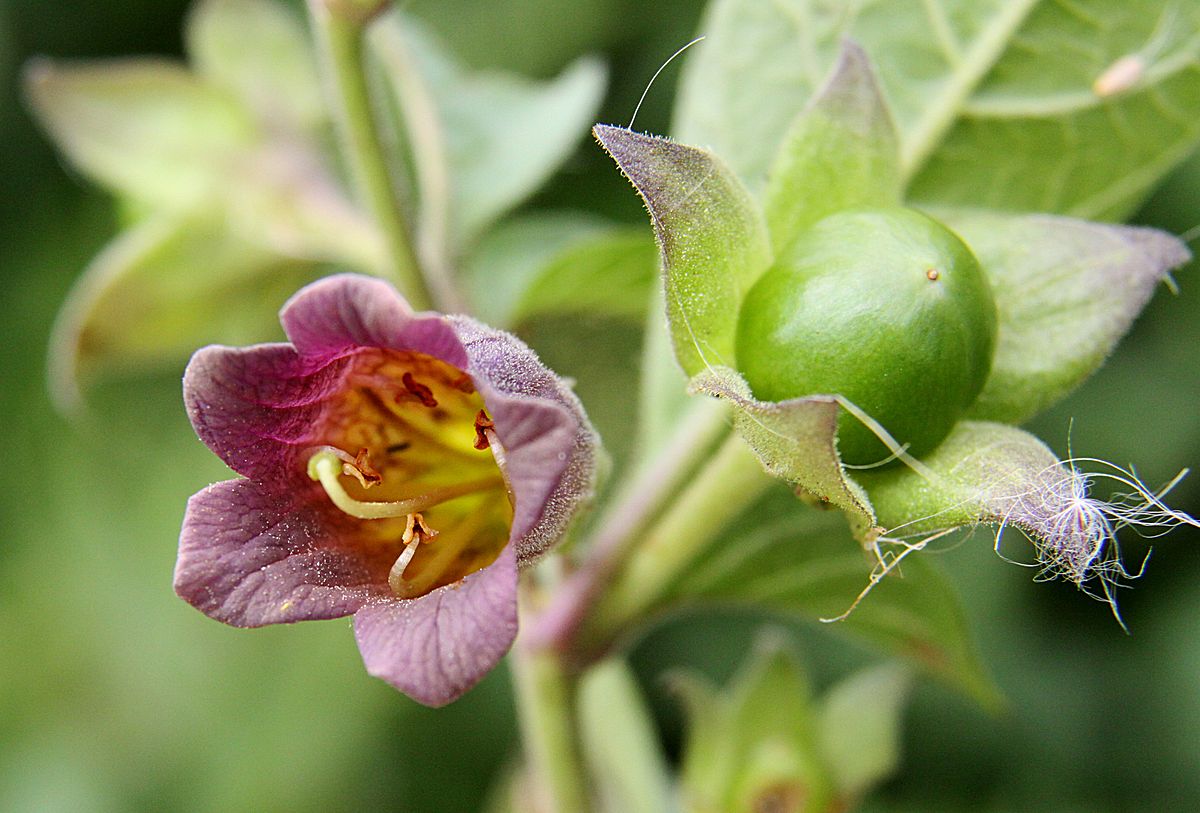 Used centuries ago as a poison, hallucinogen, and even as a beauty remedy, belladonna is a plant rich in potentially deadly alkaloids. Read on to learn more about its daunting history and the symptoms of poisoning.

“All things are poison and nothing is without poison; only the dose makes a thing not a poison.”

This 500-year-old principle of toxicology from the Swiss physician and chemist Paracelsus precisely describes the effects of belladonna (Atropa belladonna). It sheds light on why this unusual plant can be both a deadly poison and a therapeutic.

Belladonna, also known as deadly nightshade and devil’s cherries, is an herb belonging to the same family as tomatoes, potatoes, tobacco, and Jimsonweed (Solanaceae). It can be recognized by its purple, bell-shaped flowers and cherry-like, blackberries. Native to Europe, North Africa, and Western Asia, belladonna is also sometimes cultivated as an ornamental plant in the US [1, 2].

Belladonna, also called deadly nightshade, is a poisonous plant from the same family as potatoes, tomatoes, and tobacco. It contains many toxic compounds, but in very small quantities, it is believed to have some therapeutic potential.

The Dark Side of the “Beautiful Lady”

In the 16th century, Venetian women started using belladonna extract to enlarge their pupils and flush their cheeks, which was seen as attractive at the time. In fact, the plant received its common name from this use (“bella donna” means “beautiful woman” in Italian) [1, 2].

However, the poisonous properties of belladonna were well known since ancient times and even mentioned in historical literature such as Homer’s Iliad and Odyssey. In the medieval ages, belladonna was mainly used as a poison and to induce hallucinations in witchcraft and sorcery rituals [2].

According to some unverified sources, belladonna may be the reason witches are represented as flying on broomsticks. Allegedly, they would rub a “flying ointment” with belladonna and other poisonous plants on their thighs with a broom. The alkaloids would be absorbed through the skin and caused vivid hallucinations and sensations of flight. Once they regained consciousness, the women were convinced that the flight was real.

Another legend says that centuries ago, spies hired by kings and the ealthy learned how to ingest small amounts of a brew made from belladonna to develop tolerance. This way, the assassin could show the drink is safe to consume, which would encourage the victim to swallow its deadly poison.

Belladonna has a long history of use in cosmetics, witchcraft, and poisonings.

The therapeutic potential of belladonna was explored in the 19th and early 20th centuries. Belladonna and its alkaloids were used to improve conditions such as:

Belladonna is still available as a component of conventional medicines such as Bellergal (0.2 mg alkaloids) and Donnatal (0.13 mg alkaloids). However, these have largely been replaced by safer compounds with more specific effects. Belladonna is also sold as herbal preparations and homeopathic remedies [2].

Poisoning from Eating the Belladonna Plant

If you have been exposed to belladonna and experience poisoning, urgently call your doctor, 911, or contact a poison control center near you (call 1-800-222-1222).

The berries have a pleasantly sweet taste and accidental poisoning after eating them is not rare, especially in children. Poisoning due to recreational intake for its hallucinatory effects is most common in teenagers.

Eating the plant or drinking tea brewed from it can cause severe poisoning due to its high alkaloid content. The main symptoms of belladonna poisoning include [22, 23, 24, 25, 26, 27, 28]:

Belladonna is extremely poisonous despite the sweet flavor of the berries. All parts of the plant are toxic enough to be lethal.

Children are more sensitive to belladonna poisoning. While adults can survive up to 1 g atropine, doses as low as 0.2 mg/kg (equivalent to eating 2 berries in a 20 kg child) can be deadly in children [29, 23].

Belladonna’s scopolamine can have negative effects on memory, attention, and movement coordination at lower doses in elderly people [30].

Children are the most at risk of belladonna poisoning; eating even 2 berries can be fatal. Others at risk include the elderly and people with various chronic diseases.

Belladonna alkaloids atropine and scopolamine bind to muscarinic acetylcholine receptors such as CHRM2 and CHRM3. Variants of these genes may alter the effects of Belladonna [31].

Belladonna is a plant rich in alkaloids with a scary past — deadly in high amounts and potentially useful at lower doses. Belladonna is safe when prescribed by doctors, but it is rarely used nowadays.

On the other hand, eating the plant can result in serious poisoning. Belladonna berries have a pleasantly sweet taste and accidental poisoning is not uncommon.

Children and the elderly are particularly vulnerable to poisoning, which can cause hallucinations, confusion, and even coma.

If you or anyone close to you may be experiencing poisoning, call 911 or the nearest poison control center immediately.

7 Benefits of Lemon Balm + Side Effects

What is Sarsaparilla? A Plant Lost in Time + Tea Recipe

6 Health Benefits of Cardamom + Side Effects