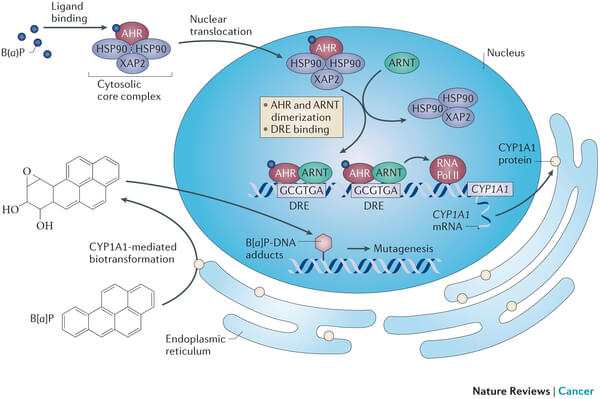 The aryl hydrocarbon receptor (AhR) is responsible for supporting cell growth and immune system response to outside threats, especially environmental pollutants. AhRs are necessary for cell differentiation and growth in various organ systems. Keep reading to learn the roles of AhR and factors that activate/block it.

What is Aryl Hydrocarbon Receptor?

The aryl hydrocarbon receptor (AhR) is a ligand-activated transcription factor responsible for controlling the expression of various sets of genes [1].

Both AhR and its partner, aryl hydrocarbon nuclear translocator, are associated with how an organism responds to environmental contaminants, mostly man-made ones. However, current research has determined different physiological roles that AhRs plays in the absence of contaminants [1].

The Roles of the Aryl Hydrocarbon Receptor

The role of AhR in the human body is complex and not yet fully understood. Most of the findings below stem from animal and cell-based studies. They give us a good idea about the potential roles and functions of AhR, but the results may not always translate to humans.

AhR during development is the coordinator for the complex regulatory network responsible for maintaining cardiovascular homeostasis [2].

In both lean and obese mice, AhR receptors are responsible for helping maintain glucose homeostasis in the body [3].

In mice who have a fatty liver, activated human AhR receptors successfully negated the effects of a fatty liver while maintaining proper energy balance [4].

AhRs interact with stem cells to signal for cellular regeneration, in the context of aging and diseases. The receptors specifically target the metabolic efficacy of cell regeneration vs. cell cycling [5].

AhRs are responsible for recognizing polycyclic aromatic hydrocarbons, environmental contaminants that can contribute to cancer development. AhRs then signals the body to prevent physiological harm [6].

AhR receptors are responsible for transmitting environmental cues to the lymphocytes, which then trigger the required immune system to regulate the body, maintaining homeostasis [8].

In dairy cows bred in a dioxin-contaminated area, AhR gene expression significantly increased to increase the number of circulating lymphocytes to fight the toxin contamination [9].

As for patients suffering from tuberculosis, a greater expression of AhRs increased overall innate immune response through the formation of lymphoid cells [10].

In mice, AhR is responsible for the maintenance of epidermal T cells, which regulate cell maturation in the skin. This helps maintain the immune system for the skin [11].

AhR is critical for controlling differentiation, growth, and function of mast cells [13].

Tryptophan plays an important role in maintaining gut immune system homeostasis. AhR in mice increases the intake of tryptophan which balances the mucosal response in the gut, allowing for the survival of mixed microbial communities [14].

Therefore, AhRs maintain gut microbiota balance and modify it in the presence of organic contaminants or pathogens. If there is an infection, AhRs will increase the immune response in order to suppress it [15].

In mice, AhR is responsible for limiting intestinal epithelial cell inflammation and even healing mice with drug-induced colitis [16].

Pathways That Activate the AhR

Ligands can either activate or inhibit AhRs. This depends on the type of ligand that binds to the receptor. The major ligands responsible for AhR activation are tryptophan-derived metabolites. There are at least five pathways that lead to the activation of AhR.

The primary activation in mammals is through the kynurenine pathway. Glioblastomas (brain tumors) produce kynurenine and is responsible for their survival through activating AhRs. It also increases regulatory T-Cells responsible for increasing autoimmune function [17].

This Kynurenine pathway is responsible for forming a positive feedback loop, allowing constant activation of AhRs.

The dopamine decarboxylase pathway is also responsible for AhR activation through direct binding with the receptor. Not only is it a direct binder to AhR, but it also serves as a downstream precursor for AhR ligands [17].

The serotonin pathway that comes from tryptophan is also responsible for AhR activation. This is due to its weak affinity for the receptor. It decreases CYP1 enzymes that would inhibit AhRs and it allows for further binding of other ligands on AhRs [17].

Tryptophan photometabolites are endogenous AhR ligands that signal activation at nanomolar concentrations. They block inflammatory responses and increase AhR functionality in the skin to prevent damage and to promote healthy, protected skin cells [17].

Natural activators of AhRs include phytochemicals that act as ligands to activate T-cell development, autoimmunity, and inflammation reduction. Unfortunately, these phytochemicals are some of the least effective AhR activators [17].

Inhibition of the AhRs can be detrimental to the health of various organ systems. This includes the cardiovascular system, the skin, and the digestive tract. Without proper AhR activation, this limits the development of mature B cells and their responses, which may weaken the immune response [18].

Different Types of Memory & How Memory Works in the Brain

8 Important Roles of Glutamate + Is It Bad in Excess?