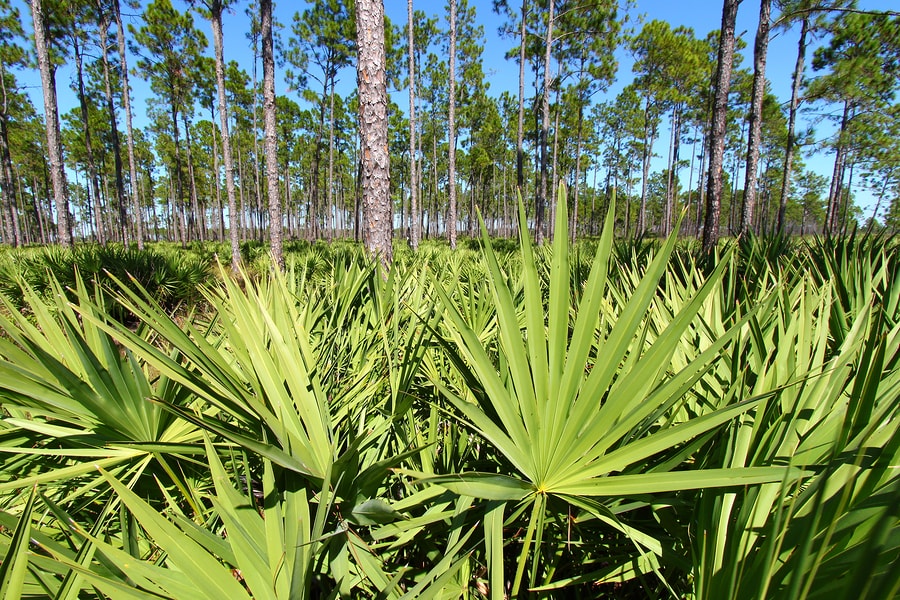 Saw palmetto is a very popular herbal supplement often used to improve symptoms of benign prostatic hyperplasia (BPH). Read on to see what the science says about this and other potential health benefits of saw palmetto.

What Is Saw Palmetto?

Saw palmetto is an extract of the berry of the saw palmetto tree (Serenoa repens) that is native to Southeast North America [1].

Saw palmetto has been used for centuries in Asia and North America for the treatment of benign prostatic hyperplasia (BPH), a non-cancerous enlargement of the prostate [2].

The Seminole tribe in Florida used the herb to treat urinary and sexual problems [2].

The plant gained recognition in the United States when it was listed as an official remedy in the US Pharmacopoeia in 1906. Since the 1990s it has been one of the top 10 most sold herbs in the U.S, with more than 2 million men using the herb regularly [3, 4].

In Europe, saw palmetto is the most popular herbal supplement used to treat BPH. Global sales of the herb total more than $700 million annually [3].

However, remember that saw palmetto is not FDA-approved for any conditions. You may try it if you and your doctor determine that it could be appropriate in your case. Saw palmetto should never be used in place of what your doctor recommends or prescribes.

Saw palmetto may treat lower urinary tract symptoms (LUTS). LUTS is a range of symptoms that include [12]:

A study in 225 patients showed that 12 months supplementation with saw palmetto along with lycopene, selenium, and a drug commonly used to treat BPH symptoms (tamsulosin) was effective in the treatment of LUTS. The same combination was as effective as another drug (tadalafil) in a clinical trial on over 400 men with LUST due to BPH [17, 18].

The fixed combination of 160 mg saw palmetto fruit extract and 120 mg nettle root extract was also effective in 2 clinical trials on almost 400 men with LUST due to BPH [19, 20].

However, another trial on 369 men with LUTS aged 45 years and older found that saw palmetto extract given over 72 weeks was no more effective than placebo [21].

Excessive urination during the night (nocturia) can cause insomnia and sleep deprivation, which decreases productivity and quality of life [22].

Saw palmetto extract (both alone and combined with nettle root) significantly decreased the number of nighttime urinations compared to a placebo and two other drugs used to treat excessive nighttime urination in 2 clinical trials on over 1,000 men with LUTS [23, 24].

Research on saw palmetto’s ability to treat BPH is conflicting. In a study in 82 men aged 30 years and older, saw palmetto decreased symptoms of BPH [1, 27].

However, another trial on 100 men aged 45 and older found no difference in treating BPH after 72 weeks of saw palmetto [28].

Similarly, a study of over 2,000 men found that 72 weeks of saw palmetto was no more effective than a placebo in the treatment of BPH [29].

Finasteride (Propecia) is a prescription 5-reductase inhibitor that is commonly used to treat BPH. A year-long study on over 1,000 men found that saw palmetto was more effective than finasteride in treating excessive nighttime urination. It was, however, less effective in treating other symptoms related to BPH [30].

A 2016 review only included trials with a special standardized extract of saw palmetto called Permixon. Permixon was effective in improving urinary symptoms of BPH compared to placebo. It was just as effective as finasteride in treating BPH [33].

This suggests that the lack of an effect found in the most recent Cochrane review was due to the differences in the saw palmetto extracts used.

All in all, the evidence is insufficient to determine if saw palmetto is effective for this condition due to the mixed results. Further clinical trials are needed to shed some light on this potential benefit of saw palmetto.

Testosterone is converted into dihydrotestosterone (DHT) by the 5-reductase enzyme. Saw palmetto blocks this enzyme, which decreases DHT and may increase hair growth [5, 35].

A study with 50 men with male-pattern baldness found that saw palmetto taken daily for two years increased hair growth on the top (crown) of the head [36].

A case report found that a 24-year-old woman with pattern hair loss responded to treatment with saw palmetto [34].

One study found that topical saw palmetto products were able to increase hair growth in 50 men with male-pattern baldness [37].

Although the results are promising, only 2 clinical trials support the use of saw palmetto to treat male-pattern baldness. Larger, more robust clinical trials are needed to confirm these preliminary findings.

For instance, one study saw a significant increase in testosterone after three months of 320 mg saw palmetto in prostate tissue isolated from 25 patients with BPH [38].

A clinical trial on 32 men found that 80 mg saw palmetto extract twice a day for six days increased testosterone levels compared to placebo. However, there is some risk of bias because the study was not blinded [39].

Two small clinical trials (one of them with a high risk of bias) cannot be considered conclusive evidence that saw palmetto helps boost testosterone. Further clinical research is required.

Quality of life is a measure of physical, social, and emotional well-being.

Supplementation with 320 mg saw palmetto daily for 8 weeks significantly increased quality of life scores by 42% in a pilot trial in 82 men [27].

Reducing the Risk of Prostate Cancer

Another study found that blocking 5-reductase saw palmetto extract was able to decrease the growth of prostate cancer cells [40].

However, a long-term study on over 35,000 men found no association between the consumption of saw palmetto and the risk of developing prostate cancer [41].

A pilot trial showed a significant increase in sexual function in 82 men aged 30 and older. However, it’s important to note that the study was funded by the manufacturer of the saw palmetto extract employed (Prostasan) [27].

Another study on 369 men found no significant difference between saw palmetto and a placebo in treating sexual dysfunctions [21].

A systematic review assessed human safety data of saw palmetto and found that side effects are mild and similar to those with placebo [42].

According to the review, the most frequently reported side effects were: [42]

More serious adverse events like death and brain hemorrhage were reported in isolated incidents, but their link with saw palmetto is highly questionable [42].

There have been two cases of pancreatic inflammation in individuals using saw palmetto [43].

Due to the lack of safety data, saw palmetto should not be used in women who are pregnant or breastfeeding [2, 46].

One patient taking saw palmetto extract experienced significantly more blood loss than normal during surgery and reduced clotting of their blood (bleeding time). The patient’s clotting ability returned to normal after stopping treatment with the extract [47].

Because of this, saw palmetto should not be taken by drugs that reduce clotting. These include:

Because saw palmetto inhibits DHT conversion it should not be used with prescription DHT blockers like finasteride (Propecia).

Saw Palmetto In Combination With Other Treatments

The combination of extracts from saw palmetto fruit and nettle root was similar to finasteride and tamsulosin in improving urinary symptoms in patients with BPH [49, 19].

A study found that a combination of saw palmetto and pumpkin seed oil greatly improved symptoms of BPH and quality of life, and decreased prostate specific antigen (PSA) levels [51].

The opinions expressed in this section are solely those of saw palmetto users, who may or may not have medical or scientific training. Their reviews do not represent the opinions of SelfHacked. SelfHacked does not endorse any specific product, service, or treatment.

Another user found it was much easier to pass urine. He stated that “before, it stopped, start, stop, start, and now there is a steady flow of urine every time I go. However, I am still getting up 2 or 3 times during the night to pass urine”.

One user took saw palmetto for 16 years and claimed that it helped improve stream size and decreased urgency to urinate.

Some people have experienced negative effects from the herb. After using it for a few months, one user got very sick, “like hitting strong flu”.

10 Health Benefits of Lavender + Side Effects