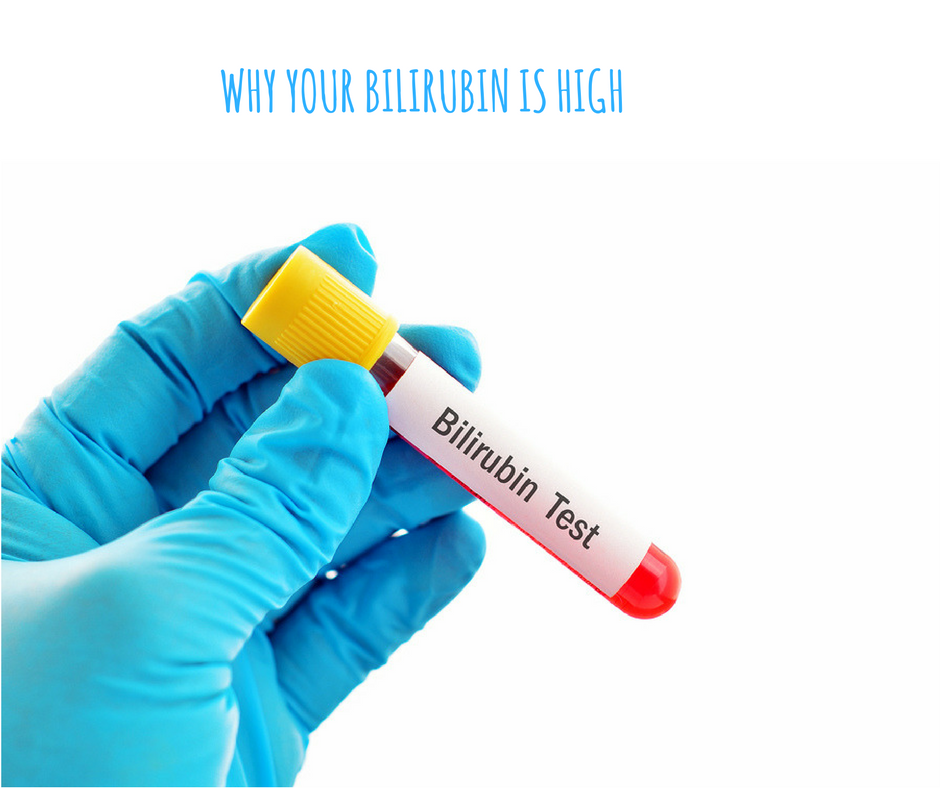 Bilirubin is a product of the normal breakdown of hemoglobin from red blood cells. It’s usually measured to check for liver disease or gallbladder issues. However, scientists are also uncovering the antioxidant and anti-inflammatory properties of this molecule. Read on to learn what high and low bilirubin levels mean, and why a higher level within the normal range may be optimal.

Bilirubin is a yellow compound produced from hemoglobin, the compound in red blood cells that allows them to carry oxygen. As red blood cells are broken down, the iron-containing part of hemoglobin (heme) is converted to bilirubin.

Bilirubin passes through two phases. In the first phase, bilirubin binds to a protein called albumin, which allows it to be carried from the blood and into the liver. Bilirubin in this phase is called “indirect” or “unconjugated” bilirubin.

Total bilirubin is the sum of direct and indirect bilirubin levels.

Bilirubin and its breakdown products are responsible for the yellow color in jaundice patients, urine, and feces [1].

However, bilirubin is not just a waste product. In recent decades, science has been uncovering the beneficial roles bilirubin plays in our bodies. Research suggests that bilirubin may act as a powerful antioxidant and anti-inflammatory agent and that it may protect against chronic inflammation and heart disease [2, 3, 4, 5, 6, 7, 8, 9].

Bilirubin tests are usually used to assess liver function and are presented as total, conjugated (direct), and unconjugated (indirect) bilirubin.

Lower bilirubin is usually not a cause for concern because it’s not associated with any specific health conditions. However, in the past few decades, studies have shown that this ‘waste product’ may have important beneficial roles, both as a potent antioxidant and a suppressor of inflammation [11, 12].

Causes shown below have been associated with lower bilirubin. Your doctor will interpret your results, taking into account your medical history, symptoms, and other test results.

Several studies have found an association between smoking and low bilirubin levels [13, 14, 15, 16].

It’s not entirely known how exactly smoking lowers bilirubin levels. But scientists think that it’s possible bilirubin gets destroyed by reactive oxygen species from cigarette smoke. Another possibility is that smoking stimulates liver enzymes that help remove bilirubin from the body [13].

A study with 4k people found that not only active cigarette smokers, but also passive smokers tended to have lower bilirubin levels [13].

A study looking at the effect of endurance exercise in 41 lean and obese men and women found that a higher body fat percentage was associated with lower bilirubin levels [17].

In another study of over 10k people, short-term weight loss increased bilirubin levels within the reference range, with bilirubin increasing linearly with weight change [18].

Although bilirubin usually increases in liver disease, low bilirubin levels can be encountered in some cases of more advanced liver damage and [19, 20].

Bilirubin may be low due to an underlying health issue. Work with your doctor to treat any underlying conditions. Also, discuss the lifestyle changes listed below with your doctor. None of these strategies should ever be done in place of what your doctor recommends or prescribes!

Causes shown below are commonly associated with high bilirubin levels. Work with your doctor or another health care professional to get an accurate diagnosis. A result that’s slightly higher than normal, doesn’t necessarily mean that you have a health condition needing treatment. Your doctor will interpret your results, taking into account your medical history, symptoms, and other tests.

Gilbert’s syndrome is a benign (harmless) condition due to an inherited gene mutation in the UGT1A1 gene that decreases the levels of the enzyme that processes bilirubin in the liver (UDP-glucuronosyltransferase). Around 10% of all people have this syndrome, but the frequency varies geographically [24, 25].

Scientists think that this may be due to the increased breakdown of red blood cells during exercise. Alternatively, it may be an adaptation to training [28].

Indirect bilirubin can increase in conditions such as fatty liver or in liver diseases which are associated with increased red blood cell destruction [32, 33].

Gallstones and gallbladder inflammation or tumors can all increase direct bilirubin [34, 35, 36, 37].

It’s also why bilirubin transiently increases after blood transfusion. Studies suggest that some of the faulty red blood cells that get transfused are destroyed within the first couple of hours, which increases hemoglobin breakdown and bilirubin levels [42].

Some rare genetic disorders, other than Gilbert’s syndrome, can increase either direct or indirect bilirubin [43, 44].

Some drugs, such as the antiviral drug atazanavir, can increase indirect bilirubin levels. Atazanavir, in particular, blocks the UGT1A1 enzyme that breaks down bilirubin [45, 46].

Bilirubin is usually not toxic for adults, but high levels can signal serious medical conditions that should be treated as soon as possible.

However, bilirubin can be toxic in newborns. It can get into the brain and cause irreversible damage, seizures, and other abnormalities [48].

Newborn jaundice is common (60%-80% of newborns overall) because the baby’s liver may take some time to fully function after birth, so bilirubin builds up. Without other health problems, this condition typically goes away on its own or it can be treated with UV light [49].

Bilirubin can be elevated due to various underlying causes. If your bilirubin is high, the most important thing is to work with your doctor to find out what’s causing it and to treat any underlying conditions. The additional lifestyle changes listed below are other things you may want to discuss with your doctor. None of these strategies should ever be done in place of what your doctor recommends or prescribes!

If you have Gilbert’s syndrome, make sure to stay hydrated, sleep well, and avoid fasting or extreme diets, stress, and strenuous exercise. Factors that stress out your body can cause spikes in bilirubin levels [50, 24, 51].

A study that looked at different types of diets in people with Gilbert’s syndrome found that those who ate cruciferous (e.g. cauliflower, cabbage, broccoli) and apiaceous (e.g. celery, carrots, parsley) vegetables had significantly lower bilirubin levels [52].

Several studies have found a link between drinking coffee (or caffeinated beverages) and lower bilirubin levels [53, 16].

Discuss your coffee intake with your doctor!

Several studies have shown that higher total bilirubin is associated with a lower risk of heart disease. Scientists think this may be due to the antioxidant, anti‐inflammatory, and antiatherogenic (preventing hardening of the arteries) properties of bilirubin [59].

According to a meta-analysis of 20 studies (323,891 people), those with higher bilirubin levels were less likely to suffer a heart attack or stroke [3].

In a study of 8.5k people, lower baseline total bilirubin levels were associated with a higher risk of future heart disease during the 4-year follow-up [60].

Similarly, in a study with 8.8k people and an 8 year follow up, people with higher bilirubin levels had a lower risk of getting heart disease [7].

Scientists have noticed that people with inflammatory disorders (e.g. in inflammatory bowel disease, rheumatoid arthritis, and lupus) tend to have lower bilirubin levels [61, 4, 62].

They suggest that higher bilirubin levels may be protective against developing such disorders, but a causal link is lacking [4, 62]

A large observational study of over 1.9 million insurance applicants found that lower bilirubin levels were associated with higher mortality over the following 12 years. Smoking, a known cause of low bilirubin, was only partially responsible for this association [63].

In another study with over 130k people on statins, lower bilirubin was associated with a higher risk of heart disease and death [64].

A study of over 4k people looked at the link between bilirubin levels and mortality, and found that those who had lower levels of total bilirubin (<0.4 mg/dl) had the highest mortality rate [65]