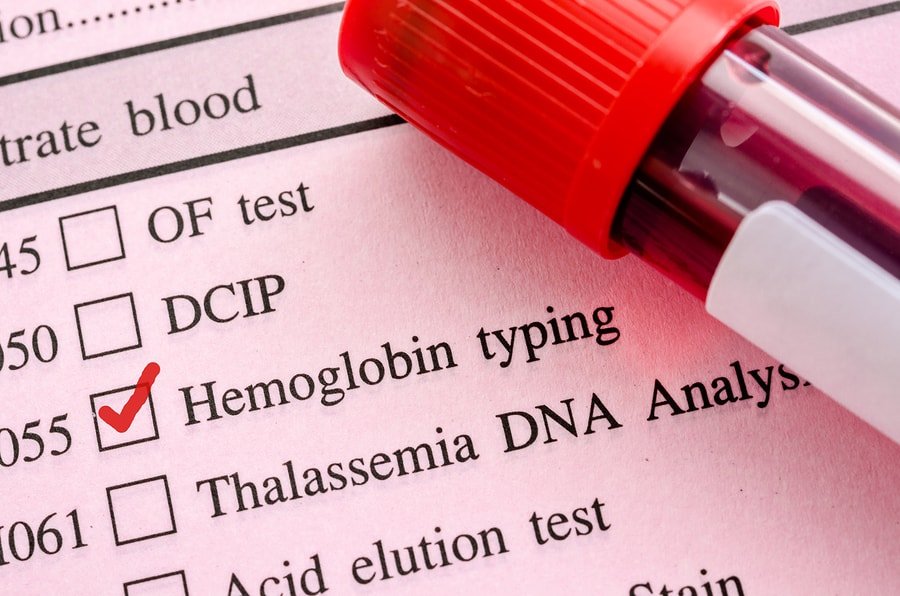 Hemoglobin is an extremely important protein. As an essential part of red blood cells, it delivers oxygen to all parts of the body. In this post (Part 1), we go over the roles, health benefits, but also the potential negatives of hemoglobin. In addition, we discuss hemoglobin lab tests, normal values, and reference ranges.

Each of the four chains contains a ‘heme’ part. ‘Heme’ is the molecule containing iron. It binds oxygen, carbon dioxide, or other small molecules such as nitric oxide [2, 1].

The iron found in hemoglobin is responsible for the red color of the blood.

The main function of hemoglobin is to transport oxygen from the lungs to tissues, and carbon dioxide (CO2) from the tissues to the lungs [3, 4].

However, it also interacts with two other gases, carbon monoxide (CO) and nitric oxide (NO) [3].

The oxygen-carrying function of hemoglobin is affected by [1]:

A study suggests that in the blood vessel walls, hemoglobin may help control the level of nitric oxide, and thereby may participate in the constricting or expanding of blood vessels. This means that hemoglobin may influence blood pressure, blood flow, and oxygen delivery to tissues from outside red blood cells [8].

As the name would suggest, fetal hemoglobin accounts for 80% of hemoglobin in newborns. It has a slightly higher oxygen affinity than adult hemoglobin. After birth, production gradually switches to adult hemoglobin over the course of several months. Normally, by the end of the first year of life, the “adult” hemoglobins (A and A2), are predominant [5, 3, 4].

In some cases, the HbF persists in adult red blood cells. This is a condition largely without symptoms, known as hereditary persistence of fetal hemoglobin [3].

When red blood cells get old and/or damaged, hemoglobin escapes into the blood. There are several molecules within our blood that recognize and bind free hemoglobin, including haptoglobin (Hp) and hemopexin (Hpx) [9].

Haptoglobin (Hp) is the primary hemoglobin scavenger in the blood [9].

It irreversibly binds hemoglobin that circulates in the blood and transports it to special white blood cells called monocytes or macrophages [9].

These cells transform the heme group into biliverdin (a bile pigment), carbon monoxide, and iron [10].

Iron is usually recycled to be incorporated into new red blood cells [10].

In cases of massive red blood cell destruction, which happens in some diseases, Hb is also cleared by the kidneys. However, if haptoglobin and hemopexin are not functioning properly, this can cause kidney damage from oxidative stress [10].

You can easily check your hemoglobin values by doing a complete blood count (CBC) test. CBC is a routine test, and the results are usually ready in a couple of hours.

The level of hemoglobin is usually given in grams (g) per deciliter (dL) or liter (L) of whole blood (a deciliter is 100 milliliters or 1/10 of a liter).

Normal hemoglobin values differ depending on your age and gender. They also may vary slightly between laboratories and in different populations:

African Americans may have lower hemoglobin values than whites [13].

We cannot live without hemoglobin. It supplies tissues with oxygen and supports all body functions.

That said, hemoglobin also has some other lesser-known beneficial functions listed below.

Hemoglobin is capable of producing and releasing nitric oxide (NO) molecules [3].

Several studies have shown that low hemoglobin and anemia may be able to help predict dementia or cognitive decline. This is likely because of the chronic lower oxygen supply to the brain [14, 15].

A study in 1435 elderly showed that those with low hemoglobin levels (below 13 g/dL in men and 12 g/dL women), had a higher risk of developing dementia over the next three years [15].

Similarly, in another study of 881 older people, those who had anemia had a 60% increased risk of developing Alzheimer’s over the following 3 years [16].

Furthermore, in another study with 558 older women, lower hemoglobin was associated with both cognitive and physical decline in yearly follow-up visits [17].

However, the effects of low hemoglobin on cognitive function are not restricted to the elderly.

In a study of 322 children, those with anemia performed worse on two tests of cognitive function [18].

Adequate Hb levels are important for our bodies to function properly. This is especially true in people with various disorders and diseases.

Anemia has been associated with worse clinical outcomes including longer length of hospital stay, diminished quality of life, and increased risk of morbidity and mortality [19].

Researchers have found that some hemoglobin-derived peptides have opiate-like activity [20, 21]. This means they may potentially relieve pain. However, more studies are needed to establish what, if any, role these peptides play in our bodies.

There are a number of adverse effects associated with hemoglobin. This happens either when the hemoglobin levels are high because there are too many red blood cells in the bloodstream, or when larger amounts of free hemoglobin are released into the blood flow because of increased red blood cell destruction.

To cope with this, red blood cells are equipped with highly effective antioxidant defenses. They contain enzymes such as Cu/Zn superoxide dismutase (SOD1), catalase (Cat), glutathione peroxidase (Gpx-1), and peroxiredoxins (Prdx1 and Prdx2). Glutathione (GSH) also contributes to this protection [10].

As long as hemoglobin is contained within red blood cells, these reactive oxygen species are taken care of. However, when red blood cells rupture and release free hemoglobin into the blood without all the antioxidant molecules, hemoglobin can potentially wreak oxidative havoc in the blood vessels and exposed tissues [22].

This happens when scavengers (such as haptoglobin) cannot remove free hemoglobin from the blood efficiently [9].

When clearance and detoxifying systems are overwhelmed, hemoglobin can trigger blood vessel and organ dysfunction [22].

Conditions that result in red blood cell destruction, releasing a massive amount of free hemoglobin into the bloodstream, include:

Free heme (the iron-containing part of hemoglobin) can induce inflammation [23].

3) Increases the Risk of Blood Clots

As a result, less oxygen reaches the tissues. The effects are similar to the situation found in severe anemia (very low hemoglobin). It often manifested as cyanosis (bluish discoloration) and impaired mental function resulting from compromised brain circulation [11].

Additionally, because of the poor blood flow, the risk of having blood vessels obstructed by blood clots (thromboembolism) increases substantially [11].

High hemoglobin may contribute to the development of high blood pressure.

In a study of over 100k healthy people, higher hemoglobin levels were associated with higher blood pressure [24].

Higher hemoglobin levels have been associated with a greater rate of global cognitive decline in the elderly [16].

In a study of 881 older people, participants with high hemoglobin had an increased risk of developing Alzheimer’s disease over the next three years [16].

In 793 older people, those with high hemoglobin performed worse on memory and perceptual speed tests [25].

Note that low hemoglobin also impairs cognitive function, and it is, therefore, important to keep hemoglobin levels in check.

Free hemoglobin adversely affects the outcome of many conditions, including hemolytic anemias, sepsis, and malaria [9].

The appearance of free hemoglobin in the blood has been linked to the development of brain malaria, which remains the most severe and difficult to treat complication of the disease [9].

This is part one of a three-part series: