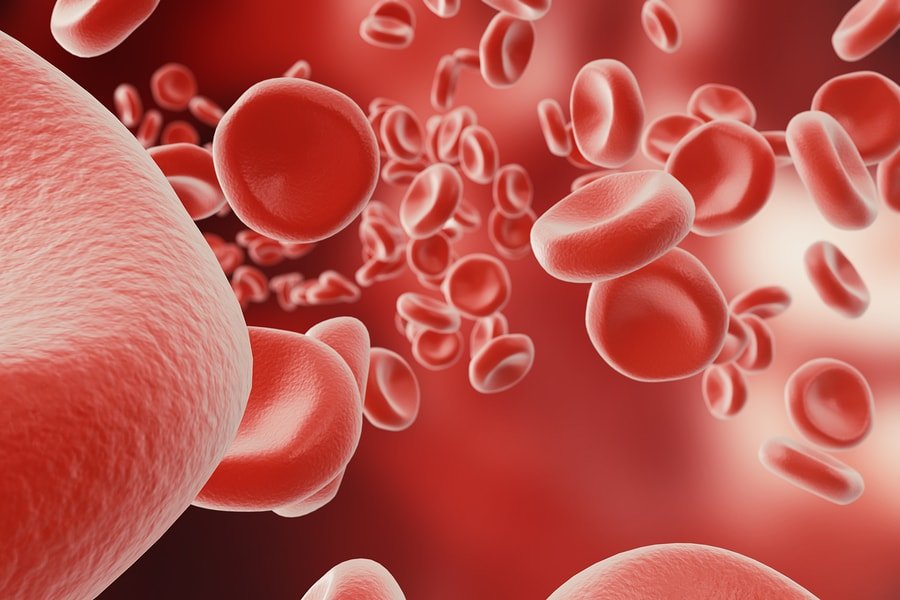 As an essential part of red blood cells, hemoglobin delivers oxygen to all parts of the body. In this post, we cover factors that modify (increase or decrease) hemoglobin naturally. In addition, we also cover genes and SNPs that affect hemoglobin levels.

Low hemoglobin can be an indicator of an underlying disease or disorder that requires medical attention. Before attempting to increase hemoglobin on your own, talk to your doctor about appropriate strategies, which may include some of the things discussed in this section. Never use any of the strategies in this section in place of something your doctor prescribes.

Iron deficiency is the most common cause of low hemoglobin (Hb).

Consuming iron-rich food (like red meat, eggs, vegetables, and grains) is usually the best way to increase iron in the blood [1].

Around 10% of the iron you consume is absorbed into the bloodstream [1].

A study of 40 young adults showed that three weeks’ supplementation of leafy green vegetables taken with oil resulted in a significant increase of Hb by 9%. According to the authors of the study, consuming oil alongside vegetables may increase the bioavailability of certain nutrients [2].

Iron supplementation significantly increases Hb levels in those who are iron deficient [3].

In iron-deficient girls, five months of iron supplementation was associated with a 0.52 g/dl greater increase in Hb compared to girls who didn’t take supplements (279 schoolgirls) [4].

Taking too much iron can upset the stomach and cause tissue damage in extreme cases. However, iron supplementation does not appear to elevate Hb above normal values. [3].

If you are deficient in vitamins that are essential in red blood cell production, correcting those deficiencies should restore normal Hb values.

First, it is important to have adequate amounts of folate and B12. Deficiencies of these vitamins will cause anemia (low Hb) [5].

Vitamin A treatment increased the production of erythropoietin (EPO), a stimulant of red blood cell production [9].

Supplementing beta-carotene significantly increased Hb levels (11%) in young healthy adults (40 subjects)[2]. It is converted to vitamin A in the body.

Talk to your doctor to determine if you are deficient in any of these vitamins and whether supplements are appropriate for you.

Zinc, copper, and selenium are trace elements that are all important to maintain adequate Hb levels.

A study showed that patients with low zinc levels have a higher risk of developing anemia (503 subjects) [17].

Selenium and copper have also been associated with anemia, and supplementation is beneficial if you are deficient [5].

Talk to your doctor to determine if you are deficient in any of these minerals and whether supplements are appropriate for you.

In 8 healthy subjects, EPO (erythropoietin) administered for 15 weeks increased red blood cell volume but decreased plasma (liquid part of the blood) volume. Both of these result in an increase in Hb levels [23].

Erythropoietin is banned in competitive sports because it artificially increases the oxygen capacity of an athlete’s blood. A test for EPO was introduced at the 2000 Summer Olympic Games in Sydney (Australia) [24].

While EPO is beneficial in those with low Hb levels, using it to increase Hb above normal levels has adverse consequences. EPO, by thickening the blood, increases the risk of heart disease, stroke, and brain or pulmonary embolism. The misuse of EPO may also promote autoimmune disease [24].

In sports, this method is also abused for performance enhancement. Especially the so-called autologous blood doping, which is the transfusion of one’s own blood, which has been stored (refrigerated or frozen) until needed [24].

Although rare, high hemoglobin can be an indicator of an underlying disease or disorder that requires medical attention. Before attempting to decrease hemoglobin on your own, talk to your doctor about appropriate strategies, which may include some of the things discussed in this section. Never use any of the strategies in this section in place of something your doctor prescribes.

Hb tends to become elevated when the body is dehydrated. This is because of a reduction in blood volume (plasma – the liquid part of blood is decreased) [3].

Smokers tend to have higher hemoglobin than non-smokers. This elevation makes it more difficult to detect anemia and other conditions associated with low Hb in people who smoke [26, 27].

Phlebotomy, known also as bloodletting, is a major therapeutic procedure that we often associate with antiquated and historical practices. However, therapeutic phlebotomy is still used for the treatment of diseases with high Hb, such as polycythemia vera [28].

It is also occasionally used in conditions such as chronic lung diseases and cyanotic heart disease (both can cause elevated Hb) [28].

One of the major goals of this treatment is to reduce blood clots and the risk of associated adverse events [28].

Do not, under any circumstances, attempt therapeutic bloodletting on your own.

A technique called hemoglobin electrophoresis can be used to identify the types of Hb a person has. In many countries, routine testing of all newborns is performed to identify common Hb variants such as thalassemias and sickle-cell anemia [29].

Hemoglobin levels are influenced by your genes. There are more than 1,000 human Hb gene variants (SNPs) [29].

These variants are common, affecting an estimated 7% of the world’s population [29].

The most common and important Hb variants include HbS (found in sickle-cell anemia) and HbE (found in thalassemia) [29].

These are all maintained with relatively high frequency in humans because they confer survival advantages when it comes to malaria [29].

Those who have one copy of the sickle-cell gene or for alpha-thalassemia are protected against malaria [30].

However, in individuals who carry both copies of these mutations, the protective effect is completely lost and they are equally prone to malaria as individuals who have normal Hb copies [30].

Most of the people with only one copy remain without symptoms and many go undiagnosed [31].

Some Hb variants are clinically benign but produce obvious changes in skin color, a ruddy complexion, or a blue-tinged skin. These variants are not clinically damaging beyond their cosmetic effects [29].

Note that some of the Hb variants may artificially elevate HbA1c levels and interfere with the diagnosis and treatment of diabetes [29].

Two alpha chains (either HBA1 or HBA2) plus two beta chains constitute HbA, which is the normal adult hemoglobin. It normally accounts for about 97% of the total hemoglobin [32].

Alpha-thalassemias can result from losing more than two copies of the alpha chain (either HBA1 or HBA2) [33].

Losing one or two copies is clinically silent, and doesn’t produce any drastic symptoms [33].

Losing all four copies results in the death of the fetus [33].

Copies are most often deleted, and these deletions are not usually assayed by genomics companies (you have to undergo special hemoglobin typing tests).

However, some cases of alpha-thalassemia are also caused by single nucleotide variants (mutations).

T to C mutation in this position causes alpha-thalassemia [34].

HbH disease occurs due to having two copies of this variant [35].

Two alpha chains plus two beta chains constitute HbA, which is the normal adult hemoglobin. HbA accounts for about 97% of the total hemoglobin [32].

Mutations in the HBB gene cause sickle-cell disease or beta-thalassemia.

However, these mutations are at the same time beneficial, conferring resistance to malaria.

The term “thalassemia intermedia” refers to milder mutations where the hemoglobin level is maintained above 6.5 g/dL [33].

The term “beta-thalassemia major” refers to having a serious disease in which there is an inability to maintain hemoglobin to levels above 6.5 g/dL [33].

On the other hand, people having a single copy (rs334 A/T) are resistant to malaria and develop only slight anemia [36].

This variant is also known as HbC.

The mutation is particularly prevalent in West African populations [37].

This variant is known as HbE.

Having a single HbE copy causes no adverse symptoms.

The highest frequencies are observed in India, Bangladesh, and throughout Southeast Asia, particularly in Thailand, Laos, and Cambodia, where it is common for individuals to inherit copies for both hemoglobin E (HbE) and beta-thalassemia [38].

This condition affects a million people worldwide and is increasing in North America [39].

Mutations in the delta chain gene are associated with delta-thalassemia. Because of the low frequency of HbA2 in the blood, people with mutations in HBD are without symptoms.

Thus, fetal hemoglobin accounts for 80% of hemoglobin in newborns, but only about 0.5% in adults [32].

In some cases, the F hemoglobin persists in adult red blood cells. This is a state without symptoms known as hereditary persistence of fetal hemoglobin (HPFH) [40].

In cases of beta-thalassemia and related conditions, gamma chain production may persist, possibly as a mechanism to compensate for the mutated beta-chain.

Haptoglobin is an important protein that sequesters free Hb from the blood. Free Hb causes oxidative stress and inflammation, and this is mostly prevented by haptoglobin [41].

In humans, the haptoglobin gene has two variants, Hp1 and Hp2 [42].

Hp2 forms a larger, bulkier protein. However, due to its size, it may be less efficient.

Having two copies of the Hp2 variant is a risk factor for heart disease in both type I and type II diabetic patients [42].

Having two Hp2 copies has also been linked to a greater risk of brain damage in people with subarachnoid hemorrhage (bleeding into the compartment surrounding the brain) [42].