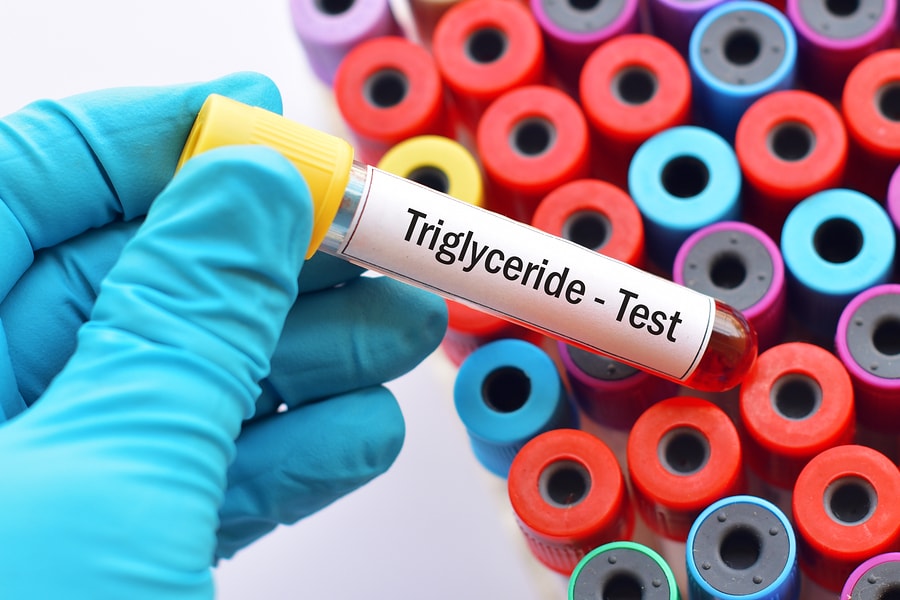 High levels of triglycerides can increase your risk of obesity, heart disease, diabetes, and other chronic health conditions. Read on to find out if your levels are within the normal range and to learn which factors and conditions can increase triglyceride levels.

Triglycerides are the scientific term for fats, including the fats you eat in your diet and the fat that is stored in your body. They are formed from a combination of a compound called glycerol and three fatty acids [1].

Dietary triglycerides are digested and absorbed in the small intestine. They are then packaged together with cholesterol and proteins in particles called chylomicrons, which carry triglycerides from the gut to other tissues [2, 3].

The liver can also produce triglycerides from sugars and other fats. It does so when you eat a lot of carbs or more calories than your body needs [4, 5, 6].

Triglycerides can be stored in fat tissue, or can be used as energy [2].

For example, the body can release stored fats into the bloodstream as fatty acids when you don’t eat for a prolonged time. These fatty acids travel back to the liver, which transforms them into triglyceride-containing very-low-density lipoproteins (VLDL) that are returned into the blood [7].

On the other hand, your body stores more triglycerides when you overeat or have an unhealthy diet [8].

Burning triglycerides for fuel requires a special enzyme (lipoprotein lipase), which is found in the muscles [1].

Triglycerides are fats you get through diet, store in fat tissue, and burn as fuel when needed. The liver can make triglycerides from sugar and other fats.

A blood test can measure circulating triglyceride levels. This test requires overnight fasting for accurate results, as triglycerides normally spike one to four hours after a meal [4].

Triglyceride levels are classified as follows [3, 9, 10]:

People of African origin tend to have lower triglyceride levels than whites [11, 12].

Women tend to have lower levels than men [13].

Triglyceride levels normally rise significantly (as much as threefold) during the third trimester of pregnancy, before eventually returning to normal [14].

A study that looked at 5.6k people who participated in a National Health and Nutrition Examination Survey found that about one-third of US adults had high triglyceride levels (above 150 mg/dL) [15].

A similar study of 5.6k people found that only about 2% of adults experienced extremely high levels (500 to 2,000 mg/dL), the leading cause of pancreas inflammation in the US [16].

High triglyceride levels can be caused by lifestyle and dietary factors, genetics, and other diseases [17].

On a mechanistic level, triglycerides will rise too much if [18]:

All the potential causes outlined below affect one or more of these conditions.

Causes listed below are commonly associated with high triglycerides. Work with your doctor or another health care professional to get an accurate diagnosis.

Triglyceride levels increase with a positive energy-intake balance (overeating). In other words, when you eat more than your body needs, the surplus is transformed into fat, including triglycerides. It’s easier to overeat when your diet is high in calories and contains lots of carbs and saturated fats [14, 6].

Low-fat, high-carbohydrate diets are among the most common causes of high triglycerides. But wait – we said that high-fat diets are bad, so doesn’t that mean a low-fat diet should be beneficial? Not quite [6].

Saturated, unhealthy fats are bad. But your body needs healthy fats – such as those found in olive oil and fish oil – to keep your triglyceride levels normal and to maintain your overall health. If you don’t get enough dietary fats, your body will revert to transforming the sugars you consume into fats [6, 19, 20, 21].

This goes against the popular but unfounded belief that your body won’t store fat as long as you don’t eat fats. In truth, high-carbohydrate diets can be much worse than high-fat diets for your triglyceride levels. Many scientists advocate that high-carb, low-fat diets likely also contributed to the obesity epidemic in America over the past few decades [6, 19, 20, 21].

Obesity often leads to insulin resistance, which is when tissues stop responding to insulin released from the pancreas. As a result, insulin can’t signal tissues to burn fat and glucose can’t enter cells to be used as energy. The liver tries to compensate by storing more fatty acids from dietary sources and producing more VLDL cholesterol, which further worsens the situation [22].

Initial studies suggest that obesity might turn on fat-increasing genes. In a meta-analysis of nearly 10k Swedish adults, body fat increased the influence of the triglyceride-increasing gene variants, especially in women. Similar results were found in a Danish study with over 8.5k adults [23, 24].

Being physically inactive and leading a predominantly sedentary lifestyle is associated with higher triglyceride levels [25, 26, 27]. The less you exercise, the less food (energy) you need, and therefore you are more likely to eat more calories than you need.

Several studies have found a link between smoking and higher triglyceride levels [28, 29, 30].

Heavy drinkers have higher triglyceride levels, and they are also at an increased risk of heart disease, alcoholic fatty liver disease, and pancreas inflammation. Excessive drinking increases triglycerides by forcing the liver to release more VLDL, reducing fat-burning, and increasing fat storage in the liver [31].

In people with type 2 diabetes tissues stop responding to insulin. This means that glucose can’t get inside of cells and cells need another energy source. As a result, the liver makes large amounts of triglyceride-containing VLDL [14].

In some cases, high triglycerides may be caused by inflammation and infection.

People with infections and chronic inflammatory and autoimmune diseases – such as rheumatoid arthritis, lupus, and psoriasis – often have high triglycerides and low HDL. These disease-triggered changes initially serve to dampen inflammation or fight infection, but they increase the risk of heart disease in the long run [37, 14].

Vitamin D has many benefits, and supporting normal triglyceride levels is one of them [39, 40, 41].

According to a study of almost 3.8k people, vitamin D deficiency is associated with higher triglyceride levels [41]. Similar results were found in another study of 1.5 people and a study of 149 children [39, 40].

An underactive thyroid (hypothyroidism) increases triglyceride levels by interfering with cholesterol production in the body. As soon as thyroid hormones normalize, triglycerides go back to normal. Even people with mild hypothyroidism and borderline normal thyroid-stimulating hormone (TSH) levels are more likely to have high triglycerides, high LDL, and low HDL [42].

People with chronic kidney disease are already at an increased risk of heart disease. They also often suffer from high triglyceride levels (but normal cholesterol levels), which further increase the risk of heart complications. Triglycerides start to increase early on in the disease and reach a maximum in the end stages [43].

People with low vitamin D levels, underactive thyroid, or kidney disease are more likely to have high triglycerides, which puts them at an increased risk of heart disease.

Some rare genetic disorders can decrease the clearance of triglycerides. These include familial chylomicronemia, primary mixed hyperlipidemia, and familial dysbetalipoproteinemia [44].

The following medications may increase triglycerides:

In 3,474 non-diabetic adults, increased blood triglyceride levels were associated with 39 genetic variants over the course of a 5-year follow-up period [51].

A case-control study of 569 obese and 194 healthy Chinese children and adolescents revealed that genetic variations in the APOA5 gene (rs662799 and rs651821) may dictate how susceptible a person is to obesity, which is linked with triglyceride buildup [52].

Certain genetic variants have been associated with high triglyceride levels, but more research is needed to determine their relevance.

Your symptoms will depend on the underlying condition. High triglycerides don’t usually cause any symptoms.

High blood triglycerides increase the risk of heart disease even when cholesterol levels are within the normal range. Many studies on diverse populations with over 60,000 people in total have confirmed this [54, 55, 56, 57, 58, 59, 60]

In another 12-year long study of 5k adults, each 10 mg/dL rise in blood triglyceride increased the risk of type 2 diabetes by 4% [66].

This would mean that triglyceride levels are likely a proxy for how healthy i.e. how high in carbs a person’s diet is.

In studies of over half a million people in total, high blood triglycerides were associated with a higher risk of lung, rectal, colon, cervical, ovarian, skin, endometrial, and thyroid cancer, but with a lower risk of prostate cancer and non-Hodgkin’s lymphoma (cancer of the lymphocytes, a type of white blood cell) [68, 68, 69, 69].

However, in a meta-analysis of over a million healthy people and cancer patients, increased triglyceride levels were not associated with the risk of prostate or breast cancer [70].

Many factors beyond triglyceride levels affect cancer risk and outcomes. More research is needed to tease apart all the influences.

High triglyceride levels may increase the risk of some cancers and lower the risk of others, but the research so far remains inconclusive.

In 25,641 patients with late-stage chronic kidney disease, high blood triglyceride levels (equal to or above 200 mg/dL) increased the risk of death among patients younger than 65 [79].

People with kidney disease and increased triglycerides may have a poorer prognosis.

In 582 patients with acute pancreatitis, blood triglyceride levels of more than 2.26 mmol/L increased the risk of [86]:

High triglyceride levels can cause pancreas inflammation and increase the risk of health complications that can occur as a result.

Triglycerides are fats that you absorb from food or create in the liver, often from sugars. High triglyceride levels increase the risk of heart disease and diabetes. Built-up triglycerides can damage and clog blood vessels, reduce fat burning in cells, and increase fat storage in the liver. High levels are often accompanied by an increase in LDL cholesterol and a drop in HDL cholesterol, a detrimental combination for your heart and overall health. Your diet and weight have a huge impact on your levels. Diets high in calories, high-carbohydrate, low-fat diets, and obesity increase triglycerides. Vitamin D deficiency, smoking, an underactive thyroid, inflammation, genetics, and certain medications and diseases can also raise your levels.

Causes & Risks of Low Fibrinogen + How to Increase Levels