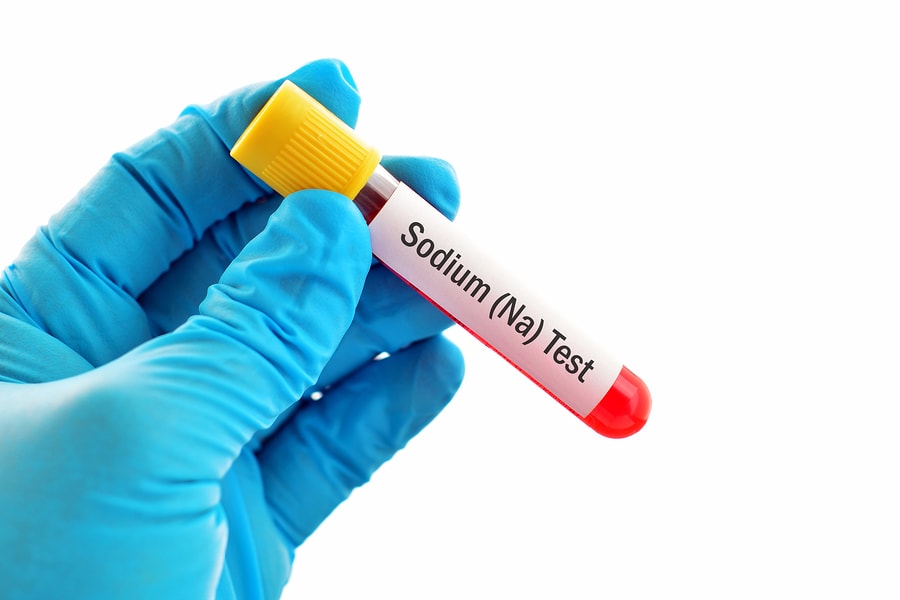 Sodium is an essential element in the blood, which plays an important role in water-electrolyte balance, blood pressure, muscle, and nerve function. Keep reading to find out what low or high sodium levels mean, and how you can increase or decrease them.

Sodium is a positive ion and one of the body’s main electrolytes, which are minerals we need in relatively large amounts. It plays vital roles in controlling blood pressure, fluid balance, and the acid-base balance in the blood. In addition, sodium is needed for proper nerve and muscle function [1].

Table salt (sodium chloride) and the natural salt content in foods are the main sources of sodium in the diet. Adults need less than 500 mg sodium/day in order to maintain normal sodium levels in the body. However, 95% of the world’s population consumes between 3 and 6 g/day, which is much more than necessary [1, 2].

Healthy sodium levels in the body are maintained in a narrow range by [1, 3, 4]:

Dietary sodium deficiency is extremely rare, even among people on very low sodium diets. Sodium levels may fall below normal under extreme conditions of heavy and continued sweating, or in cases of heavy injury, chronic diarrhea, or kidney disease where the body is unable to hold onto sodium [1, 2].

Blood sodium can increase above normal when people don’t drink enough water or have an excessive salt intake. It can also increase due to health issues such as kidney disease. Elevated sodium is more common in the elderly, because of a decline in kidney function and a lower intake of liquids [5, 6, 7].

Sodium levels are often measured as part of a complete metabolic panel, which provides doctors important information about your overall health.

When sodium levels are low, this is called hyponatremia (“hypo”= less than normal, “natremia”= sodium in the blood).

A result that’s lower than normal, doesn’t necessarily mean that you have a health condition needing treatment. Your doctor will interpret your result, taking into account your medical history, symptoms, and other test results.

Further, hyponatremic disorders are divided into euvolemic, hypervolemic, and hypovolemic, based on the amount of fluid in the body [9, 10].

Causes shown here are commonly associated with low sodium levels. Work with your doctor or another health care professional to get an accurate diagnosis.

These can decrease sodium levels:

Drugs that can decrease sodium levels include:

The most important thing is to work with your doctor to find out what’s causing your low sodium and to treat any underlying conditions!

Treatment will depend on the type of hyponatremia and its severity.

Drink water in moderation. Drinking too much water will further decrease your sodium levels. If you are sweating excessively due to exercise or sauna, make sure to replenish your electrolytes as well as water. Weighing before and after an athletic event can tell you how much fluids you need. Otherwise, use thirst and the color of your urine as guidance – if you’re not thirsty and your urine is pale yellow, it’s likely you are getting enough water [14, 22, 23, 24].

Avoid drinking alcohol, especially beer, as this will further decrease your sodium levels [13, 14].

Make sure you are getting enough protein in your diet (if your kidneys are healthy). Low protein diets, that are not uncommon in the elderly, can make it harder for the kidneys to remove excess water [25, 26].

However, a result that’s higher than normal, doesn’t necessarily mean that you have a health condition needing treatment. Your doctor will interpret your result, taking into account your medical history, symptoms, and other test results.

People at a higher risk of hypernatremia are infants, seniors, hospitalized patients, and people suffering from mental illnesses. Hypernatremic disorders are divided into euvolemic, hypovolemic, and hypervolemic hypernatremia [28, 29].

Causes shown here are commonly associated with high sodium levels. Work with your doctor or another health care professional to get an accurate diagnosis.

High sodium levels can be caused by:

Drugs that can increase sodium levels include:

Symptoms of high sodium levels include [5]:

The most important thing is to work with your doctor to find out what’s causing your high sodium and to treat any underlying conditions!

Lower your salt intake. Avoid foods high in sodium, such as breads, cheeses, and processed foods in general [7, 39]. Reducing your salt intake can be beneficial even when your sodium returns to normal [40].

Drink enough water as this will help in diluting the high sodium concentration [7].

Discuss using a salt substitute that contains potassium chloride with your doctor. These shouldn’t be used if you have a medical condition such as diabetes or kidney disease, or if they interfere with your medications [41].