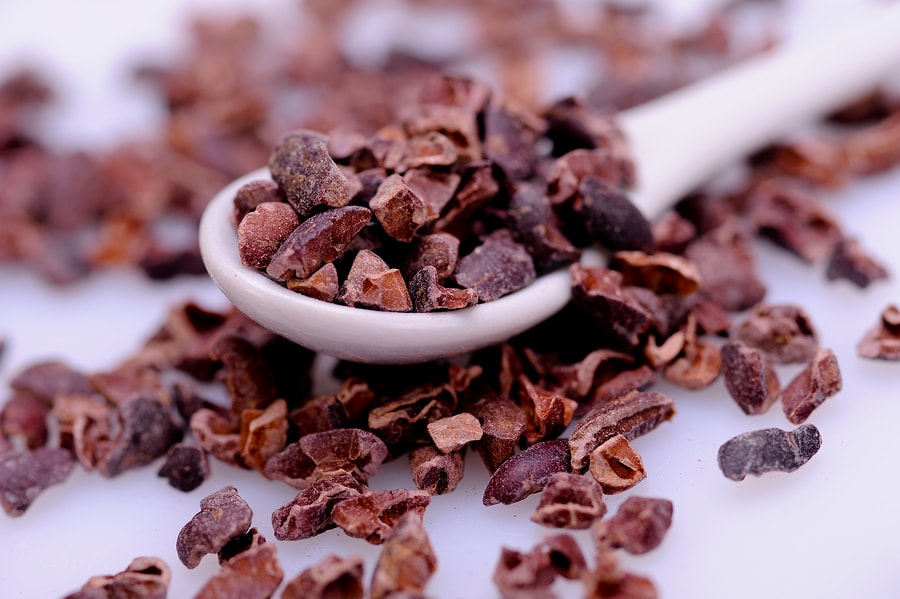 Theobromine, found in the cacao plant, may keep your blood pressure down and your mind active without the potential negatives of caffeine. Read on to discover more about the benefits of this naturally occurring stimulant, along with potential side effects, dosage, and user reviews.

Theobromine is a naturally occurring compound found in cacao plants and tea leaves.

Named after the scientific name of cacao trees, Theobroma Cacao, scientists found it had similar but milder stimulation and heart effects to caffeine.

It originated in the tropical rainforests of the Americas in times of the Mayan and Aztec civilizations and was considered a “food of the gods,” “theo” meaning god and “broma” meaning food [1, 2].

Theobromine is associated with increases in energy and urine production, and the potential to shield heart health and airways [3].

It blocks phosphodiesterase enzymes and increases the activity of a messenger called cAMP. This messenger activates an enzyme called PKA, which reduces inflammation and causes the widening of blood vessels and increases stimulation [5].

Theobromine also blocks adenosine receptors, which usually trigger hormones such as norepinephrine that can increase blood pressure. It increases the speed the brain responds to signals, such as increased heart rate.

Theobromine may cause blood pressure to decrease by widening the blood vessels and stimulating urination (diuretic) [6].

In a study of 84 healthy patients, theobromine significantly lowered blood pressure at doses between 250 and 1,000 mg [7].

Additionally, in a study of 42 healthy individuals, cocoa enriched with nearly 1,000 mg of theobromine caused a clear decrease in blood pressure over a 3-week period [9].

Studies on people with high blood pressure are needed to evaluate the therapeutic potential of theobromine.

No valid clinical evidence supports the use of theobromine for any of the conditions in this section. Below is a summary of up-to-date animal studies, cell-based research, or low-quality clinical trials which should spark further investigation. However, you shouldn’t interpret them as supportive of any health benefit.

In a 30-patient study, cocoa-based drinks with varying amounts of theobromine and other chocolate flavanols were consumed. As these flavanols took effect, participants had improved performance on mental tasks and reduced mental fatigue [10].

That said, we can’t tell how much the other components, besides theobromine, contributed to the results.

Theobromine helps open up the airways, which can enhance lung function and help with different respiratory conditions [6].

In a study of 21 young adults with asthma, theobromine capsules increased bronchial diameter, which increased airflow to the lungs [11].

The anti-inflammatory potential of theobromine may be responsible for this effect. It can reduce the levels of inflammatory cytokines such as IFN-y and TNF-a [12, 13].

In guinea pigs, theobromine helped with cough due to lung inflammation. A dose of 32 mg/kg theobromine was supplied to guinea pigs with a cough. Coughing was significantly reduced for 4 hours [14].

More research is needed to investigate the cholesterol-lowering effects of theobromine.

In a survey of 5,587 people, 30 mg theobromine supplements contributed to staying asleep for a long period. Compared to other foods with caffeine, cocoa can result in a more restful sleep due to a higher theobromine and lower caffeine content [16, 17].

The results are based on subjective survey reports and require further investigation in controlled trials.

No clinical evidence supports the use of theobromine for any of the conditions listed in this section. Below is a summary of the existing animal and cell-based studies; they should guide further investigational efforts but should not be interpreted as supportive of any health benefit.

According to test-tube research, theobromine can naturally promote healthy enamel in teeth [18].

Human molars (teeth) were more protected when treated with theobromine solution. The researchers even considered it a potential alternative to fluoride as a toothpaste ingredient [18, 19].

In people with gout, crystals of uric acid salts build up in the join, which can trigger severe pain and inflammation. In test tubes, theobromine prevented uric acid crystallization, showing the potential for further research [20, 21].

Theobromine may turn out to be a great complementary approach to gout, but more studies are needed.

Theobromine extracted from cacao inhibits the buildup of uric acid crystals, which may form kidney stones. Since theobromine is a diuretic, it may also prevent kidney stones by increasing urine flow [22, 6].

However, in the lack of clinical evidence, this effect is still in the domain of theory.

Theobromine Side Effects and Precautions

Theobromine appears to be safe when used in an adequate dosage. Long-term daily intake of up to 1,500 mg may cause the following side effects in some people [23, 24, 25, 26].

In two studies of 122 healthy participants, doses between 300 and 1,000 mg of theobromine increased heart rate in a dose-dependent manner. In 5 hours, the heart rate increased by about 6 – 7 beats per minute [7, 9].

For this reason, people with an irregular heart rate may want to avoid theobromine supplements.

Due to the lack of safety data, pregnant women and children should avoid them, too. The amounts naturally present in foods should be safe.

Theobromine interacts with caffeine increasing heart rate, alertness, and widening of blood vessels more than either substance would if taken individually [27].

For the same reason, theobromine may, in theory, interact with drugs that impact heart rate and blood pressure, such as diuretics, beta-blockers, calcium channel blockers, etc.

Theobromine is also found in tea leaves, guarana berries, and cola nuts, all of which also contain caffeine [4].

Theobromine supplements have not been approved by the FDA for medical use. In general, regulatory bodies aren’t assuring the quality, safety, and efficacy of supplements. Speak with your doctor before supplementing.

Pure theobromine is a fine bitter powder, which is taken on its own or used in foods and drinks. Some also use the powder on top of their toothpaste when they brush their teeth for its fluoride-like effects [15, 17].

The below doses may not apply to you personally. If your doctor suggests using theobromine, work with them to find the optimal dosage according to your health condition and other factors.

A standard dosage of theobromine ranges from 50-1,000 mg, depending on the product. Dosages of 500 mg have the greatest benefits with little to no negative side effects [26].

For many people, theobromine successfully lowers blood pressure. They also noticed less negative side effects when they take theobromine by itself instead of in a product that also has caffeine.

It is often preferred over caffeine due to the similar but significantly milder effects. The effects of theobromine also last longer. Those who take cocoa as a supplement experience the mental benefits of combining the two substances, such as better focus, concentration, and mood.

Users also notice improved physical health when combining theobromine with caffeine because of the long-lasting energy the substances provide during exercise.

Some users experience a fast-paced heart rate and get slight trembling feelings or nausea with pure theobromine powder.