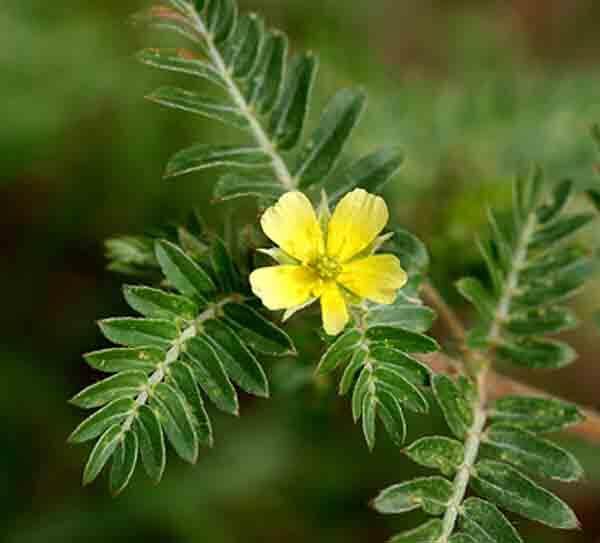 Tribulus is an herb that has been used in various systems of traditional medicine for enhancing libido, fertility, and vitality. Read on to learn about its active components, the theory of how it could work, and the potential dangers of supplementation.

What is Tribulus Terrestris?

Tribulus (Tribulus terrestris) is a plant that grows in the Mediterranean and in subtropical and desert regions around the world, including India, Vietnam, China, Spain, Mexico, and Bulgaria. This common weed is particularly well-adapted to warm, dry regions. It got its nicknames “puncture vine” and “devil’s thorn” from the spikes that cover its fruits [1, 2].

Although there are over 25 species of tribulus plants, most of the research focused on Tribulus terrestris [3, 4].

This plant has a long history of use in ancient medicine systems. As part of Indian and Chinese traditional medicine, the roots and the fruits of tribulus were considered remedies for numerous ailments and used as general health tonics. Its historical uses include boosting libido and fertility, flushing fluid buildup (edema), reducing kidney stones, and fighting urinary tract infections [1].

Today, tribulus is commonly marketed and supplemented for increasing testosterone, libido and strength. Tribulus supplements are popular performance enhancers among bodybuilders. Others take tribulus for its alleged heart-protective effects or to remedy sexual issues.

As the popularity of tribulus increased, so did the misconceptions and false information surrounding its use. For one, taking tribulus to boost testosterone and athletic performance probably won’t work. Tribulus may help with sexual dysfunction and low libido, but its active compounds seem to have a testosterone-independent mechanism of action [4].

Additionally, tribulus supplements have not been approved by the FDA for medical use. Supplements generally lack solid clinical research. Regulations set manufacturing standards for them but don’t guarantee that they’re safe or effective. Speak with your doctor before supplementing.

Tribulus terrestris is a subtropical plant with a long history of use in traditional medicine. It has a reputation for increasing testosterone, libido, and strength, but the evidence is scarce.

Scientists believe that saponins and flavonoids in tribulus are responsible for the effects of this plant. Of these, the steroidal saponin protodioscin is the most important one. Extracts of tribulus are usually standardized to contain a certain percentage of saponins in the form of protodioscin [5, 1, 6].

Other active components found in the tribulus plant include [1, 5]:

The roots primarily contain the saponins protodioscin, diosgenin, and tribulosin. They also contain a protein that prevents the buildup of kidney stones [7, 8, 9, 10, 11].

The saponin profile varies depending on where the plant is grown. For example, studies suggest that varieties in southeast Europe (e.g. Bulgaria and Greece) have over 30 times the amount of protodioscin than varieties in Western Asia [18].

Researchers have proposed the following mechanism of action of the active compounds found in tribulus.

The concentration of these active compounds in different formulations varies.

For more about the potential benefits of tribulus, check out this post.

Protodioscin is believed to be responsible for the libido-enhancing effects of tribulus, while other active compounds are currently the subject of research into cancer, inflammation, and stress.

Although tribulus can be supplemented as powdered root or fruit, extracts are much more common. Extracts are usually standardized to contain 15-60% total saponins (~45% is typical) and at least 6% protodioscin [22, 4, 23].

Tribulus varieties that grow in eastern Europe have much higher protodioscin (and much lower tribulosin) levels than those grown in India and Vietnam. If you’re seeking libido enhancement, protodioscin is the most important compound you should look for [24].

Tribulus is sometimes combined with other herbs, such as:

Tribulus extract is the most common form of supplement. Some supplements use herbal combinations with Boerhaavia diffusa or sea oak kelp.

Due to the lack of regulation in the supplement industry, it was discovered that some tribulus products were contaminated with anabolic steroids. As is usually the case, the banned steroids weren’t listed on the label. This may result in unintentional doping violations in athletes. The Australian Institute of Sport classifies tribulus as a substance with “high risk of contamination” that should not be used by athletes [29].

The following side effects have been reported in clinical trials:

Two cases of kidney damage (nephrotoxicity) from tribulus tablets or tribulus water have been reported.

Tribulus fruit should not be eaten. Consuming the spine-covered fruit has been reported to cause serious respiratory problems (pneumothorax and bronchial polyp).

Digestive upset is the most common side effect of tribulus supplementation.

Tribulus increased prostate specific antigen (PSA) levels by 20% in a study of 70 men who took 750 mg daily. PSA may be higher in men with prostate cancer and other prostate disorders and is sometimes used by doctors to screen and monitor these conditions [23].

Ulcers are sometimes caused by long-term, high-dose NSAIDs. In a comparison study in mice, Tribulus reduced pain similar to the NSAID aspirin, but it still caused ulcers (though reportedly less than aspirin) [30].

On the one hand, some studies point to the liver- and kidney-protective benefits of tribulus. In mice, it lowered levels of a marker of liver damage (the enzyme ALT), reduced oxidative stress, and increased levels of the antioxidant glutathione in the liver, and protected the liver and kidneys from damage due to toxic substances [31, 32, 33, 34].

The compounds tribulusamides (A, B, and D) and quercetin isolated from tribulus fruit are also being studied for their potentially protective effects in liver cells [15, 12].

However, other studies suggest that tribulus may damage the liver and kidneys. In one study, Tribulus damaged the kidneys of rats. Goats that were fed high-dose tribulus experienced damaged liver and kidneys, while sheep fed 80% tribulus and 20% hay and wheat were left with similar damage (and increased liver enzymes) [35, 36, 37].

The most serious recorded case is of a man who drank 2 L of tribulus water had dangerously high AST and ALT levels. His kidneys started to suffer and he experienced seizures. The symptoms improved once he stopped taking tribulus. The exact dosage he was taking remains unknown. In another study, 750 mg/day of tribulus only mildly raised the liver enzyme AST (by 5%) [38, 23].

People who have liver or kidney damage are advised to stay away from tribulus supplements and carefully monitor liver enzymes and other markers of liver and kidney health.

Tribulus may theoretically reduce blood sugar by increasing insulin levels. The combination of blood sugar-lowering drugs may cause excessive drops in blood sugar [39, 40, 41].

Tribulus may act as a diuretic by increasing the amount of fluids and minerals the body releases in the urine. This may increase lithium levels. The combination of diuretics may further decrease fluid flushing and mineral balance [47].

Tribulus active compounds may interact with a number of pharmaceutical drugs, including those for lowering blood sugar, blood pressure, and cholesterol, as well as diuretics. To avoid unexpected interactions, talk to your doctor before supplementing with tribulus.

Between 1g and 3g daily of the extract was used in studies examining a cholesterol-lowering effect [39, 42].

Using 12g/day of an Ayurvedic tribulus fruit powder was effective for increasing fertility in men [54].

Tribulus terrestris is a herb with a long history of traditional use that is believed to help improve libido and sexual function.

The active compounds responsible for its effects are steroidal saponins, plant compounds that may mimic the effects of sex hormones and increase blood flow. Of these, protodioscin is the most potent. Its levels vary depending on where the plants were grown: Southeastern Europe varieties have the highest levels and Asian varieties the lowest.

Digestive upset is the most common side effect of supplementing with tribulus. Some studies also found increases in prostate specific antigen, kidney damage, and ulcers. Tribulus may be dangerous to people with pre-existing kidney or liver damage, and it may interact dangerously with a number of medications; talk to your doctor before supplementing.

Professional athletes should be careful when supplementing with tribulus, as they run the risk of purchasing suspicious products contaminated with anabolic steroids.