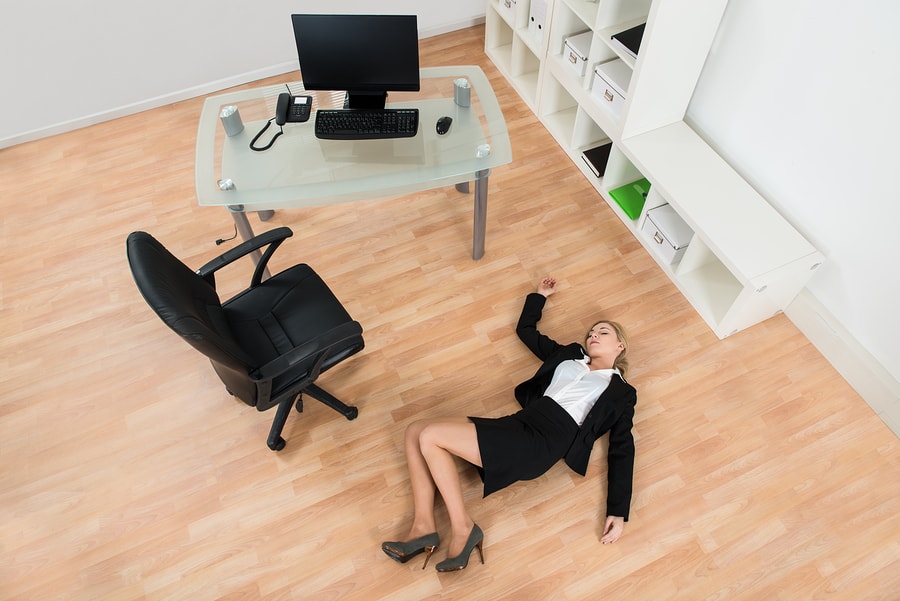 There are many types of syncope (fainting) episodes, and they can even be misdiagnosed. Vasovagal syncope is usually not serious, but it can signal a potentially dangerous medical condition. Being able to recognize a fainting event can greatly improve safety, especially when operating dangerous equipment. Read on to learn about self-diagnostic and prevention techniques.

What Is Vasovagal Syncope?

Vasovagal syncope is a sudden but brief loss of consciousness. It is usually triggered by emotional distress, such as the sight of blood or a shocking event. These episodes may be isolated or recurrent [1].

Other common terms used to refer to syncope include:

Vasovagal syncope is also referred to as neurocardiogenic syncope [1].

There are several reasons why someone might faint. Vasovagal is one of the most common types of fainting (about 50% of cases), together with orthostatic fainting (caused by low blood pressure) [2].

Types of fainting include:

Why do we faint? In some cases, it is because of the low blood/oxygen supply to the brain. The faint brings our body into a gravitationally neutral position, thereby offering a better chance of restoring brain blood supply and preserving brain function [6, 7].

In other cases (such as after emotional distress), fainting protects the heart against too much sympathetic (fight-or-flight) activity [8].

The symptoms we list here are commonly associated with vasovagal syncope but are insufficient for a diagnosis. Work with your doctor to discover what underlying condition might be causing you to faint and to develop an appropriate plan to improve your health.

Defects in salt metabolism may be associated with more severe symptoms. Low dietary salt can lead to a lower blood volume and make the body more susceptible to fainting. However, more conclusive evidence is needed to clearly associate low dietary salt with an increased incidence of vasovagal syncope [10].

Common vasovagal syncope is diagnosed if the fainting event is associated with emotional distress, such as fear or pain. Prolonged standing can also cause fainting [3].

Fainting episodes can either be one-time events or recurrent. They can even serve as a signal for more serious clinical disorders, such as allergies and diabetes [11].

The tilt table test is used to replicate and document fainting symptoms. Patients are usually strapped to a tilt table, then suspended upright while medical data is collected [12].

An implantable loop recorder can be surgically implanted under the skin to track heartbeat patterns. The recorder detects any abnormal heart rhythms during fainting events [12].

The treadmill test is the newest method to diagnose syncope. Patients start walking at 1.7 mph at a flat incline. Speed and incline increase every 3 minutes and it ends after 30 minutes. After a 1-minute rest, the patient is administered nitroglycerin and medical data is collected [13].

Vasovagal Syncope Can Be Misdiagnosed as a Seizure

Vasovagal syncope is commonly misdiagnosed as an epileptic seizure due to occasional involuntary movements (myoclonic jerks) after fainting. However, fainting does not show the same responses as a seizure on different diagnostic tools (ECG, EEG, etc.) [14].

Many mechanisms have been suggested to cause fainting episodes, but these factors and their relative contributions are still not fully understood [12].

Vasovagal syncope occurs by the activation of a heart reflex (hypotension/bradycardia reflex) through the stimulation of the vagus nerve. This reflex causes a rapid decrease in heartbeat and widening of blood vessels [15].

The vagus nerve is part of the parasympathetic nervous system, sometimes referred to as the rest-and-digest system [16].

In a clinical trial on 23 children and adolescents (7-18 years), those with vasovagal syncope had significant imbalances in the involuntary control of their body (autonomic nervous system). They had decreased sympathetic (fight-or-flight) and increased vagal tone. These imbalances may be more severe for adolescents [17].

In a clinical trial on 29 people with syncope induced by the tilt table test, images of their hearts revealed a sudden loss of blood flow into the heart, possibly decreasing blood outflow moments before fainting [18].

These factors increase the likeliness of fainting [19]:

A study on almost 200 people associated anxiety with an increased incidence of fainting episodes. This suggests that anxiety may be an appropriate therapeutic target in some people suffering from frequent vasovagal syncope episodes [20].

Extreme emotional challenges in people with social anxiety can be a primary trigger for fainting episodes. For instance, the sight of blood can cause syncope in people with this phobia [21].

In a study of 80 people, those who had higher, recurrent fainting episodes had 30% higher anxiety levels and 20% higher panic levels compared to healthy participants [22].

Fainting when going to the bathroom is rare and poorly understood. Some scientists believe that the mechanisms of syncope are similar to those of urination and bowel movements [5].

A sudden strain to the bladder can quickly decrease blood pressure and heart rate through inadvertent activation of the vagus nerve. For this reason, it is best not to force the body when on the toilet [5].

Pregnant women are susceptible to fainting and may experience warning signs such as paleness, sweating, nausea, fatigue, and warmth [25].

Maintaining large amounts of blood in the body can be beneficial to prevent syncopes. Some strategies that may help include [15]:

Education on how to avoid triggers may be sufficient for those with a single fainting experience, making specific therapies unnecessary [3].

Different types of treatments with varying efficiencies are available. A pilot trial on 37 people with serious, recurrent vasovagal syncope episodes showed that combining different strategies had a better effect than a single standard treatment [2].

In most cases, the doctor will recommend the following measures aimed at reducing fainting recurrence:

A minority of patients will continue to have recurrent syncope despite these measures and may require medication [39].

The drug most commonly used is fludrocortisone acetate, a synthetic steroid known as Florinef. In a clinical trial on over 200 vasovagal syncope patients, it reduced the incidence of fainting events [40].

Drugs for high blood pressure and antidepressant SSRIs may also help, although most drugs tested so far turned out ineffective.

In a clinical trial on 16 vasovagal syncope patients, midodrine (a hypertension drug), decreased the severity and frequency of syncope episodes without causing severe side effects [41].

In another trial on 68 syncope patients, paroxetine (an antidepressant/SSRI better known as Paxil) significantly improved their symptoms even in those unresponsive or allergic to other traditional medications. However, Paxil failed to prevent syncope in another trial on 25 healthy people [42, 43].

Beta-blocker drugs (used to treat high blood pressure and irregular heartbeat) showed minimal benefits on patients with recurrent fainting. The European Society of Cardiology suggested stopping the usage of beta-blocker drugs for the treatment of syncope [12, 44].

In another trial on 96 vasovagal syncope patients, the SSRI fluoxetine (also known as Prozac or Sarafem) and the beta-blocker propranolol (a beta-blocker) were equally ineffective [45].

Very rarely, severe cases may require the placement of a pacemaker to regulate the heartbeat. A meta-analysis of pacemaker usage as a treatment for fainting showed a 17% reduction in fainting. However, the authors warned that many of the trials included were not properly controlled and may have overestimated the effectiveness of this measure [46].

Research on the genetic causes of vasovagal fainting is limited, but the susceptibility to fainting may be inherited in some cases. Specific triggers, however, cannot be inherited [47].

An increased chance of fainting episodes is associated with a genetic locus of yet unknown function (chromosome 15q26). Further studies may lead to better therapeutic treatments [48, 47].

The following genes and SNPs have been associated with a higher susceptibility for vasovagal syncope [49, 50]:

The opinions expressed in this section are solely those of people who have experienced vasovagal syncope episodes, who may or may not have medical or scientific training. Their reviews do not represent the opinions of SelfHacked. SelfHacked does not endorse any specific product, service, or treatment.

Patients usually reported feeling dizzy or lightheaded prior to the blacking out event. Some also reported vertigo, weakness, nausea, or vision problems. Syncope patients commented that their vision problems ranged from blurred vision to increased sensitivity to light.

After the fainting event, some people recovered quickly but still had mild nausea and confusion. Some people reported successfully reducing the incidence of syncope events by limiting alcohol and caffeine consumption.

Because it’s easy to misdiagnose other disorders as syncope, it’s important to report any fainting events to the doctor for a proper diagnosis.