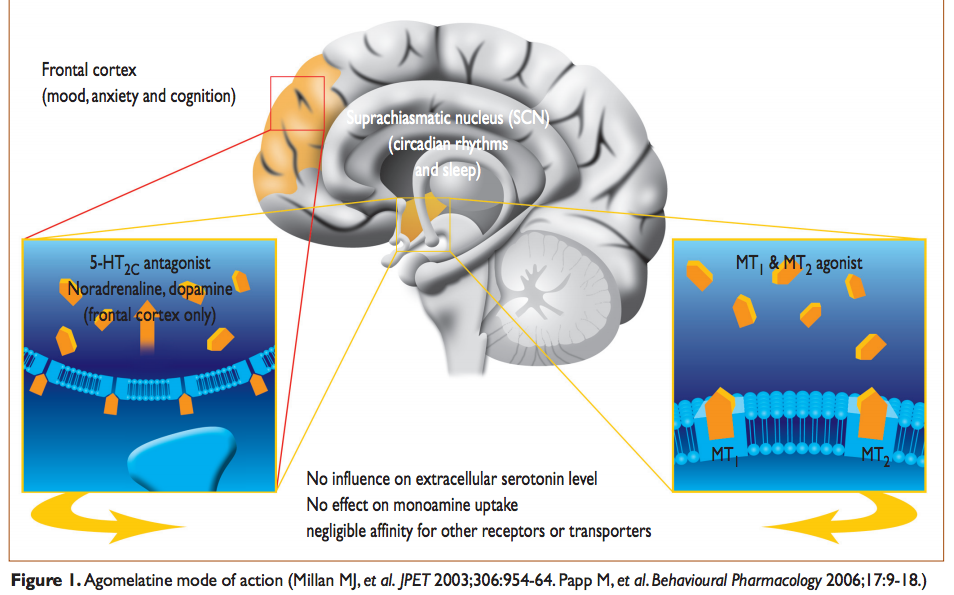 Agomelatine is a melatonin analog, developed under the assumption that an abnormal circadian rhythm can contribute to depression. However, this theory remains unproven. Read about its potential uses and side effects in this post.

Disclaimer: Agomelatine is not approved in the United States. The development for the US market was discontinued in October 2011. The major concern was that efficacy had not been sufficiently shown. This drug was approved in Europe in 2009 and Australia in 2010, where it can only be used with a doctor’s prescription. Discuss your symptoms with your doctor. He or she will diagnose and treat your health issues.

Agomelatine (Valdoxan) was developed as an atypical antidepressant on the basis that abnormal circadian rhythms may contribute to depression. This theory requires further human trials to be adequately verified [1].

Agomelatine is not approved for use in the United States.

This drug was undergoing several phase III clinical trials in the US. Until late 2011, agomelatine was listed as scheduled for submission to the Food Drug Administration (FDA). However, the development for the US market was discontinued and withdrawn in October 2011, when the latest clinical trial results became available [3].

Presently, agomelatine is approved in the European Union for the treatment of major depression [4, 5].

Although agomelatine is molecularly similar to melatonin, it has a longer half-life [6].

By blocking 5-HT2C receptors on dopaminergic and noradrenergic pathways, agomelatine may elevate dopamine and norepinephrine levels in the brain (in the prefrontal cortex but not in the limbic system). Scientists hypothesize this might improve mood and provide nootropic cognitive enhancement [7].

Researchers also suggest that agomelatine may enhance the number of spontaneously-active neurons and the bursting activity of dopaminergic neurons in the ventral tegmental brain area [2].

Research on Depression & Other Diseases

According to some theories, depression is linked to certain abnormalities in the limbic system (part of the brain involved in emotions and memory) and circadian rhythms. Scientists are researching how the following changes may be linked with depression:

However, additional high-quality studies are needed to determine how valid these hypotheses and potential biomarkers are. None of them have been confirmed in large-scale studies.

Agomelatine is not approved in the United States. Discuss your symptoms with your doctor who should recommend approved medical treatment for your condition.

By stimulating melatonin receptors, agomelatine is hypothesized to resynchronize the circadian rhythm with the external environment. In animal studies, agomelatine restored dysfunctional sleep/wake cycles, represented by an enhanced duration of REM and slow-wave sleep after acute oral administration [2].

In Europe, agomelatine is indicated for the treatment of major depressive episodes in adults [5].

In humans, limited research suggests that adjunctive agomelatine may also be useful in the treatment of acute bipolar depression [7].

One open-label study suggests that agomelatine as monotherapy may improve seasonal affective disorder (SAD). However, larger double-blind, randomized, placebo-controlled trials are still needed to further define the clinical value of agomelatine for SAD [7].

Additionally, current evidence suggests that agomelatine alone may not be effective as a monotherapy for the treatment of unipolar or bipolar depression or schizoaffective depression, likely because of its unique mechanism of action [3].

According to limited clinical research, agomelatine may also improve generalized anxiety disorders (GAD) in people that do not have depression.

In one study (double-blind randomized controlled study) involving over 400 patients over the course of 12 weeks, agomelatine was shown to be as effective as escitalopram in mitigating anxiety symptoms [14].

A couple of other trials had positive results. However, people with GAD frequently have other psychiatric and medical illnesses. Therefore, future studies should explore the effects of agomelatine on anxiety in the real-world, general patient population [7].

Melatonin, serotonin, and norepinephrine play a major role in neuropathic pain disorders. Agomelatine may reduce neuropathic pain in fibromyalgia cases that have previously been unresponsive to medical treatment, possibly by blocking the serotonergic receptor 5-HT2C [15, 16].

However, the existing studies had several limitations: small sample sizes, short duration, lacking control groups. Additionally, patients with fibromyalgia have a high prevalence of depressive and anxiety disorders. Therefore, it’s hard to tease apart fibromyalgia improvements from agomelatine due to its antidepressant effects [7].

The effects of agomelatine on BDNF, neurotransmitter balance, bone and muscle health, and inflammation have yet to be determined in large-scale clinical trials.

Therefore, the studies outlined below should guide further research, but we can’t draw any conclusions about additional agomelatine indications and/or uses based on them.

Agomelatine should only be used under medical supervision in countries where it has been approved by the governing regulatory agency.

Ongoing research is exploring whether agomelatine increases BDNF levels in the hippocampus, thereby enhancing the survival of existing neurons and synapses and the growth and production of newly-generated ones [20, 21].

According to one hypothesis, elevated BDNF may help prevent stress-induced impairment of visual memory and spatial learning [20, 21, 22].

Some researchers believe agomelatine may influence long-term behavioral response to stress to mitigate symptoms of mood disorders and physiologically enhance the brain’s ability to cope with stressful situations. Their hypotheses remain unproven [20, 21, 22].

Other research grounds are looking to determine if agomelatine increases CREB (cAMP response element-binding protein), which is posited to prevent the degenerative effect of environmental stressors on the hippocampus [23, 7].

By blocking the serotonergic receptor 5-HT2C, agomelatine likely increases norepinephrine and dopamine release in the frontal cortex. Researchers think this may enhance daytime motivation and help combat the physical and mental effects of mood disorders, though their stance remains poorly researched [7, 18].

Effects on Bones and Muscles

Uncontrolled amounts of inflammatory cytokines may impair the balance between osteoblast and osteoclast activity, which are involved in bone restoration and maintenance [24, 25].

High amounts of IL-1β, IL-6, and TNF-α may even weaken bones; the link between these cytokines and osteoporosis, arthritis, bone erosion, cartilage degradation, and even gum disease are being researched [25, 26, 27, 28].

Additionally, scientists are investigating whether agomelatine reduces the levels of proinflammatory cytokines TNF-α, IL-1β, and IL-6 [29].

By suppressing these potentially harmful cytokines, agomelatine would theoretically affect bone health. However, the effects of agomelatine on bone health in humans are unknown [25].

Some researchers hypothesize that agomelatine raises both IGF-1 and growth hormone levels by stimulating melatonin receptors, which regulate hormone secretion during sleep [30, 2].

Lipopolysaccharides (LPS) is a bacterial toxin. It may leak into the bloodstream in people with increased gastrointestinal permeability or “leaky gut.” It has been linked with inflammation and metabolic problems like insulin resistance, obesity, diabetes, and heart diseases, though most of these associations remain inconclusive [33].

In rats, agomelatine reduces the inflammatory cytokines IL-1beta and IL-6 induced by LPS. In the same study, agomelatine deactivated NF-kB, a protein that turns on inflammatory responses in the immune system [29].

Side Effects and Dangers of Agomelatine

The possible side effects of agomelatine include [34]:

Importantly, agomelatine can increase liver enzyme levels and may damage the liver.

During treatment, transaminases should be periodically monitored and treatment discontinued if transaminases exceed three times the upper limit of normal [5].

Doctors should perform liver function tests in all patients before starting treatment. Treatment should not be initiated if transaminases exceed three times the upper limit of normal [5].

Additional enzyme screening should be performed after 3, 6, 12, and 24 weeks. If the dosage is increased, the screening period should restart. A final screening after the treatment is also recommended [35].

The use of agomelatine should be stopped if liver enzyme screening indicates a 3X increase of blood transaminases. Beware of symptoms that may indicate potential liver damage, such as dark urine, light-colored stool, yellowing skin or eyes, stomach pain, or new/worsening fatigue [36].

The data on agomelatine overdose is limited but symptoms of an overdose may include [34]:

As with all antidepressants, there is a potential risk of suicide. People at high risk of suicide should be closely monitored by their physician [34].

Pharmaceutical agomelatine is prescribed (as Valdoxan) in 25 mg tablets, typically taken once daily at bedtime. Dosage may be adjusted to 50 mg (2 x 25 mg tablets) taken at bedtime if agomelatine treatment has no effect after two weeks [36].

Agomelatine should not be prescribed to elderly people (75+ years) [36].