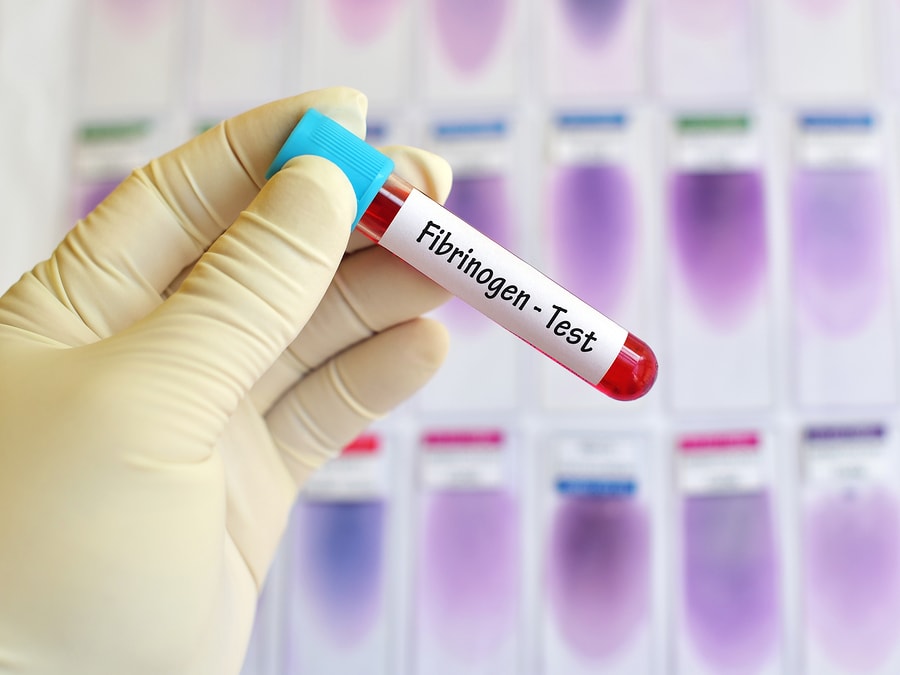 As one of the 12 factors responsible for blood clotting, fibrinogen is essential for the body’s healing processes that we often take for granted. Read on to understand how fibrinogen functions in the body, why doctors test its levels, and what the normal range of fibrinogen is.

Fibrinogen is a protein produced in the liver that is essential for a variety of processes, including blood clot formation, wound healing, inflammation, and blood vessel growth [1, 2].

Fibrinogen is a positive acute phase protein, which means that its production is increased during injury, infection, and inflammation. This is mainly mediated by cytokines, such as IL-6 [3, 4, 5, 6].

Fibrinogen is a protein produced in the liver. It helps create blood clots, heal wounds, and grow new blood vessels in response to injury, infection, or inflammation.

Blood clots are extremely important to our health because they stop excessive blood loss and initiate wound healing [7].

In the process of coagulation (clotting), protein strands and cell fragments (platelets) combine together to form a hardened clot. This newly formed clot plugs the site of the wound, preventing further bleeding while the blood vessel continues to bend and stretch around the site [8].

Blood clot formation occurs through a series of steps:

Blood clots are formed when fibrinogen is cut into fibrin strands, which join with platelets to create a strong net that stops excessive bleeding after injury.

2) Regulates the Breakdown of Blood Clots

Fibrinogen and its successor fibrin both affect the breakdown of clots (fibrinolysis) [11].

While fibrin activates plasmin (the enzyme that degrades clots), fibrinogen inhibits it. These opposing actions ensure that clots are broken down only after they are no longer needed [12].

This activity is significant because clots become detrimental when they block blood vessels, leading to heart attack and stroke [13].

The balance of fibrinogen and fibrin in the body prevents excessive blood clotting.

3) Is Involved in Immune Defense and Healing

In a gene association study of 631 sepsis patients, genetic mutations that resulted in increased blood fibrinogen levels were correlated with faster recovery and lower mortality [18].

Fibrinogen increases immune defense; it may improve recovery and tissue regeneration after infection or injury.

These popular tests measure how long it takes blood to clot. Abnormally long times indicate a problem in clot formation, such as low levels of functional fibrinogen [20].

However, these tests measure a number of different protein interactions, so their results do not necessarily correlate with fibrinogen levels, nor are they sensitive to mild fibrinogen deficiency or dysfunction [21].

A high clotting time indicates a problem with clot formation. It can point to low fibrinogen indirectly.

A Fibrinogen Activity test measures the conversion of fibrinogen into fibrin. It is measured by the two methods described above and converted into fibrinogen concentration in the blood (mg/dL) [21].

The Fibrinogen Antigen Test (or Immunological Fibrinogen Assay) measures how much fibrinogen is present in the blood by the presence of fibrinogen antibodies [21].

Fibrinogen blood levels vary in the general population and range from 175 – 425 mg/dL, with average levels varying by geographical region [24].

The normal level may vary between labs. For example, some labs have 150 to 500 mg/dL as the normal range.

Your doctor will interpret your fibrinogen test, taking into account your symptoms, medical history, and other test results.

The Functional Fibrinogen Assay and the Fibrinogen Antigen test give more precise readings of your actual fibrinogen levels than clotting tests.

People with dysfibrinogenemia have normal levels of fibrinogen but structural abnormalities that do not allow the molecule to function properly [25].

Approximately 55% of people with this disorder are without symptoms, 25% suffer from excessive bleeding, and the remaining 20% have excessive clotting [26].

Congenital dysfibrinogenemia is typically autosomally dominant, meaning that only one parent needs to have the disorder for their child to inherit the disorder. Afflicted individuals are typically diagnosed as adults, possibly after they have passed it on to their children [28, 25].

Because of this and the large percentage of asymptomatic carriers, scientists suggest it may affect up to one in 100 people [29].

People with dysfibrinogenemia have normal levels of fibrinogen that is dysfunctional. About half of them are symptom-free, but the rest suffer from excessive bleeding or clotting.

Hereditary renal amyloidosis describes the harmful build-up of proteins (amyloid fibrils) in the kidneys, which can lead to kidney failure and death [32, 33].

Hereditary renal amyloidosis is caused by a variety of inherited mutations (including a mutation in fibrinogen’s Aα amino acid chain) [34, 35, 32].

Hereditary renal amyloidosis is an inherited disorder caused by a mutation in fibrinogen that often leads to kidney failure.

Fibrinogen levels are influenced by your genes. If you’re not interested in genetics, skip this part.

Common alternative expressions of the FGA and FGG genes result in the functional fibrinogen subtypes AαE and γ’, respectively [36].

rs2070011 (T>C) has been associated with high blood fibrinogen levels, possibly by increasing interleukin-6 production of the fibrinogen gene [37, 38].

rs1800790 (G>A) (minor allele) is associated with high fibrinogen, as well as reduced inflammatory response and increased risk of heart disease, likely because this sequence affects the production of the entire FGB gene [40, 43, 44, 37].

rs1049636 (T>C) is associated with higher blood fibrinogen levels, likely by increasing the production of the fibrinogen gene by IL-6 [45, 38].

SNPs in three different genes coding for fibrinogen (FGA, FGB, and FGG) may increase your risk of high or low fibrinogen levels.

So far, we have only been able to identify 3% of the estimated 34 to 46% of the variation in blood fibrinogen levels between individuals that are controlled by genes [37, 51, 52].