Multiple sclerosis is an autoimmune disease that damages the nerves in the brain and spinal cord. It attacks around 400K people in the US with constantly increasing rates. In addition to environmental factors, different genes may play a role in this complex condition. Read on to learn the facts about MS prevalence, genetic factors, and potential ways to lower the risk.

Multiple sclerosis (MS) was first described, illustrated, and documented in 1838 by Sir Robert Carswell, a Scottish Professor of Pathology, but it was not officially named until 1955 [1, 2].

The popular epidemiological notion is that MS frequency increases with geographic latitudes [3]. 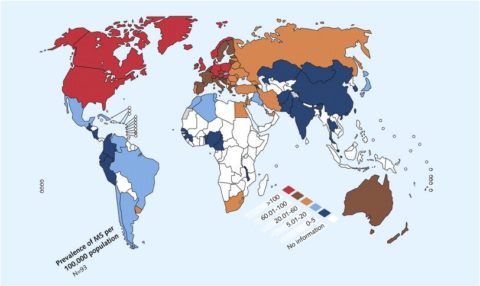 We still don’t fully understand why MS is more prevalent in these regions, but a growing body of evidence indicates a role of inadequate sun exposure and vitamin D levels [3, 4].

According to the Atlas: Multiple Sclerosis Resources in the World 2008 published by the World Health Organization (WHO), the global median estimated prevalence for multiple sclerosis is 30 per 100,000 individuals [5].

The incidence of multiple sclerosis is low in childhood but drastically increases after 18 years of age, peaking around 25 to 35 years and declining after [6].

Despite these numbers, multiple sclerosis only marginally reduces the life expectancy of an individual but greatly diminishes the quality of life [8].

It’s important to note that just because certain genotypes are associated with a condition or irregular lab marker, it doesn’t necessarily mean that everyone with that genotype will actually develop the condition. Many different factors, including other genetic and environmental factors, can influence the risk of multiple sclerosis.

Different ethnic populations around the world have different prevalence and susceptibility to multiple sclerosis that cannot be explained by environmental factors alone [1].

Individuals with relatives affected by multiple sclerosis have a higher probability of developing the disease [1].

Identical twins have a 30% chance of both developing MS if one of them develops it. First-degree relatives of individuals affected by multiple sclerosis are 10 – 25 times more likely to develop the disease than the general population [9, 10].

Genetic variations may play a role in multiple sclerosis. Several genetic regions have been implicated in the development of the disease. The most prevailing genes are the HLA genes which are contained in the major histocompatibility complex [11].

Despite the complexity and diversity of those genes, recent advances in genotyping have led to the discovery of at least 16 more genes (other than HLA) associated with susceptibility to multiple sclerosis [12].

Genome-wide association studies have found 52 risk alleles associated with the development of multiple sclerosis (HLA-DRb1 gene is the strongest correlation) [13].

The following are the genes associated with Multiple Sclerosis. Some genes are more problematic than others with regard to the risk factor.

Multiple sclerosis is a complex disease with many contributing factors that are not fully understood. There isn’t a known way to prevent MS, but some environmental risk factors can be controlled. Despite the promising preliminary research, more studies are needed before drawing conclusions.

Adequate intake of vitamin D during childhood and adolescence may reduce the risk for multiple sclerosis later in life [29].

Higher vitamin D blood levels may be protective against developing multiple sclerosis (MS), according to some researchers. In one study on women, each 10 nmol/L increase in blood vitamin levels was associated with a 20% decreased the risk of multiple sclerosis [30, 31, 32].

Also, higher vitamin D levels were associated with a reduced worsening and recurrence of multiple sclerosis symptoms. In a study, each 10 nmol/l increase resulted in up to a 12% reduction in recurrence [33, 34].

According to another study, optimal blood concentrations of this vitamin may reduce disease-related complications (including increased bone degradation, fractures, and muscle weakness) [35].

Additional large-scale studies are needed to confirm these findings.

UV radiation from moderate sun exposure appears to have protective effects against MS, too [29].

These two factors are mainly responsible for much higher MS rates on higher latitudes [4].

Cigarette smoking not only increases the risks of MS but also accelerates the progression from relapsing-remitting to secondary progressive MS [38, 39].

Therefore, smoking cessation is a crucial step towards lowering the MS risk.