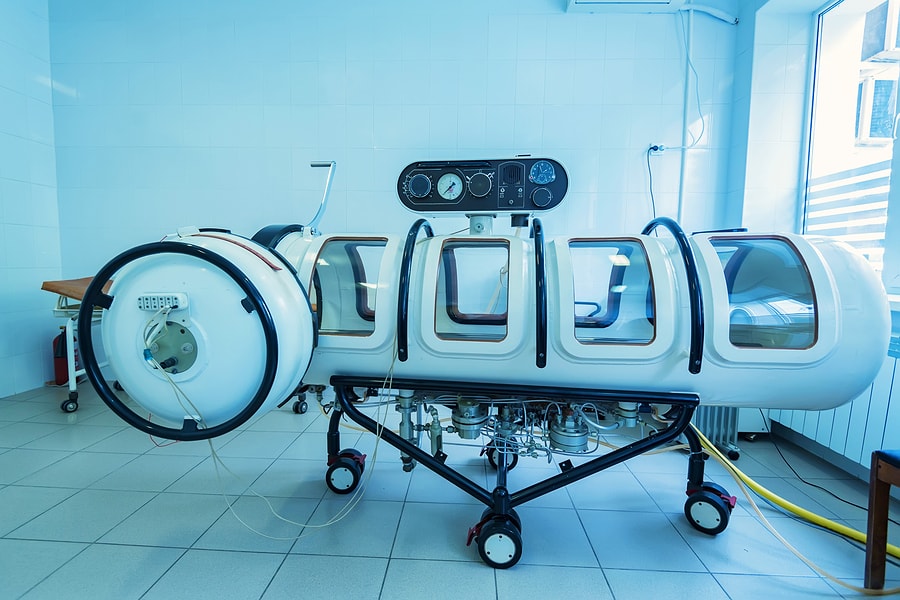 Oxygen is essential for life. Oxygen therapy heals wounds, fights infections, and has been approved for a number of medical uses. Continue reading to learn more about what conditions oxygen therapy could be effective for.

What is Oxygen Therapy?

Oxygen therapy is the use of supplemental oxygen to treat a variety of medical conditions. There are two main types of oxygen therapies available:

Normobaric oxygen therapy is supplemental oxygen administered at the same pressure of our atmosphere (1 atm). Depending on the medical condition, 40 to 100% of saturated oxygen is delivered to the body.

Hyperbaric oxygen therapy is 100% saturated supplemental oxygen delivered at higher atmospheric pressures. Patients are placed in a high pressure, full body chamber (hyperbaric chamber). This increases oxygen delivery to all of the tissues of the body [2].

Hyperbaric oxygen therapy is approved for the treatment of a number of conditions such as air or gas embolisms, burns, diabetic wounds, and traumatic ischemia.

During normobaric oxygen therapy, oxygen can be delivered as oxygen gas, liquid oxygen, or via oxygen concentrators.

Oxygen gas is compressed in a gas cylinder. Liquid oxygen is stored in portable tanks and is boiled to release oxygen gas. Oxygen gas cylinders are also fitted with regulators that sense a patient’s breathing rate and sends pulses of oxygen.

Oxygen concentrators are devices that take oxygen from the air and concentrate it for use.

Blood is made up of 4 components: plasma, red blood cells, white blood cells, and platelets. Oxygen is transported through red blood cells that contain the protein hemoglobin. Hemoglobin is an iron-containing protein that oxygen can bind to [3].

The only differences between normobaric and hyperbaric oxygen therapy are the pressure that they’re applied at and the method of delivery. Both forms of therapy increase the amount of oxygen that is delivered in the blood [4].

Increasing the delivery of oxygen to the body supports the healing process of damaged tissues.

The FDA has approved oxygen therapy as a treatment for a number of conditions, including:

Acute lung failure is a condition that is caused by choppy or labored inhaling, causing low blood oxygen levels [7].

A multicenter analysis of patients with lung failure indicated that normobaric oxygen therapy cleared the upper airways, improved lung function, and reduced pressure on the lungs [9].

Chronic obstructive pulmonary disease, or COPD, is a group of progressive lung diseases. The most common are emphysema and chronic bronchitis [10].

An observational study with 195 COPD patients for 6 months indicated that normobaric oxygen therapy improved the quality of life of patients with emphysema [12].

Cystic fibrosis is a genetic condition caused by the lack of the CFTR gene. People with cystic fibrosis suffer from breathing problems [14].

The following purported benefits are only supported by limited, low-quality clinical studies. There is insufficient evidence to support the use of oxygen therapy for any of the below-listed uses.

Asthma obstructs airways in the lungs and can cause low blood oxygen (hypoxemia) leading to severe health complications. In 106 patients with severe asthma, normobaric oxygen therapy for 2 years increased the survival of patients and reduced symptoms [17].

Ischemic stroke is caused by a clot in the blood vessels that decreases blood flow to the brain and leads to cell death.

There is limited evidence in humans indicating that normobaric oxygen therapy could potentially be beneficial for stroke patients. Oxygen therapy was most beneficial when applied within the first few hours of having a stroke [18].

The importance of prompt treatment is highlighted in a clinical trial wherein delayed normobaric oxygen therapy of 40 patients did not improve the outcomes of these patients [19].

Oxygen constricts blood vessels, and hyperbaric oxygen therapy might increase pressure on the heart. Patients with a history of congestive heart failure are also at risk of adverse effects [25, 2].

To avoid adverse effects or complications, oxygen therapy should only be administered by a trained medical professional.

Side Effects of Oxygen Therapy

Despite the potential risks and side effects, proper use of normobaric and hyperbaric oxygen therapies are considered relatively safe and low-risk interventions, assuming correct application [28].