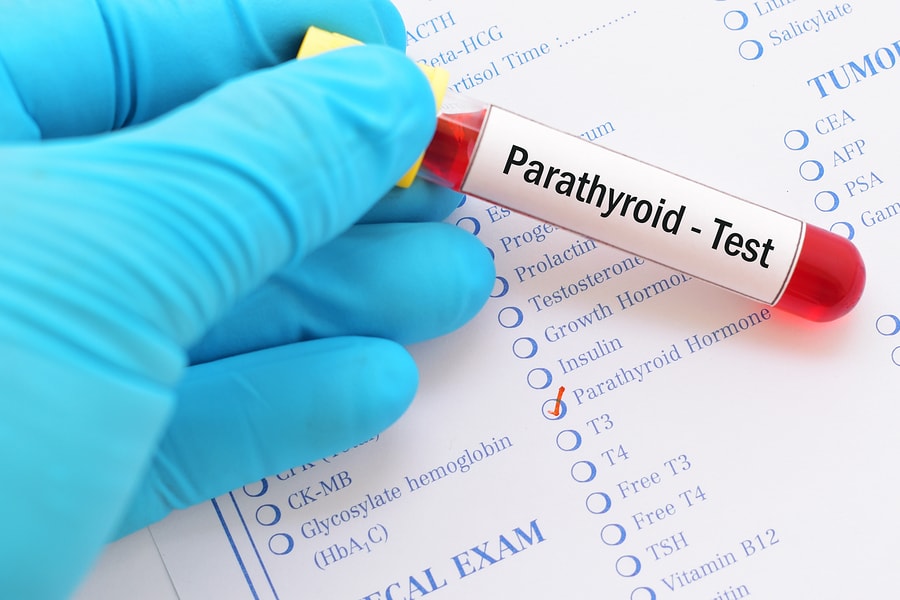 Hidden in the back of the thyroid gland are 4 small parathyroid glands that release parathyroid hormone (PTH), which is critical for maintaining the mineral balance in the body. Low or high blood PTH levels can decrease your quality of life and cause serious health issues. Read on to learn more about PTH and how high or low levels can affect your health.

What is Parathyroid Hormone (PTH)?

PTH controls calcium, phosphorus, and magnesium levels in the blood.

Because calcium balance plays a critical role in many bodily functions, including muscle movement and nerve impulses, calcium levels are tightly controlled to stay within a narrow range in the blood.

PTH’s main function is to increase calcium levels when they are too low. It [1]:

Measuring parathyroid hormone levels can help uncover the cause of abnormal calcium levels and can be used to monitor the progression of some diseases.

Bones act as a calcium reservoir, releasing calcium into the bloodstream when blood levels are low and taking up calcium when they are high. PTH communicates to bone cells what action is needed [2].

When calcium levels in the blood are high, parathyroid glands release less PTH. Low PTH levels signal bones to take up calcium from the blood [2].

As blood is filtered through the kidneys, some amount is returned to the blood and some removed from the body in the urine. Parathyroid hormone influences the net balance of how much calcium and phosphorus are removed and how much is retained during that process [3].

Parathyroid hormone triggers the kidneys to convert vitamin D from its inactive to its active form (1,25-dihydroxy vitamin D or calcitriol). In its active form, vitamin D increases the absorption of calcium in the intestines [4, 5, 6].

Calcitonin is produced in the thyroid gland and helps maintain calcium blood levels. If calcium levels are too high, then calcitonin reduces them [7].

Calcitonin is produced in response to high calcium levels in the blood [8].

Basically, calcitonin has the opposite effect of PTH. Both hormones are responsible for maintaining healthy levels of calcium in the blood [9].

Parathyroid hormone levels can be measured by a blood test. PTH normally ranges from 14 to 64 ng/L [10]. However, different testing methods may be used by different laboratories, which is why the normal ranges may vary.

Therefore, while labs will provide the range of normal values for their methodology, direct comparison of values from different labs may be inappropriate [11].

Normally, PTH is released both at low levels throughout the day and at pulses of higher levels a few times per hour [12].

On average, men’s vitamin D levels are lower and PTH levels are higher than women’s levels [13].

Parathyroid hormone levels can also increase during and following exercise, depending on its duration and intensity [14].

Levels May Differ Between Populations

Levels Are Higher with Obesity

As total body fat increases, parathyroid hormone levels increase. The effect of obesity on PTH levels is seen even when controlling for the decrease in vitamin D levels associated with more body fat [17].

Hyperparathyroidism is the condition of having abnormally high blood parathyroid hormone levels.

Causes listed below have been associated with higher PTH. An abnormal PTH test can indicate there is a problem, but can’t pinpoint the cause. Your doctor will usually follow this result with additional testing to investigate why your PTH is high. Work with your doctor or another health care professional to get an accurate diagnosis.

Primary hyperparathyroidism usually results in high calcium and low phosphorus levels in the blood, which can lead to kidney stones, low bone density (osteopenia and osteoporosis due to more bone being broken down), and even depression [20, 21].

Secondary hyperparathyroidism occurs when low blood calcium levels caused by certain conditions and diseases stimulate the parathyroid glands to produce too much PTH. It is commonly caused by chronic kidney disease and results in high phosphorus levels in the blood [22].

Chronic kidney disease can impair kidney function, which can decrease the amount of calcium reabsorbed by kidneys during blood filtration. The resulting low blood calcium levels signal the parathyroid glands to release more PTH, causing abnormally high levels of the hormone in the blood [23, 22].

Abnormally low levels of calcium in the blood increase parathyroid hormone levels. Dietary deficiencies in calcium or vitamin D are the most direct causes of low blood calcium levels [24].

Poor absorption of nutrients by the intestines can lead to low blood calcium levels, which could trigger more PTH release [25].

Drugs that can increase PTH include:

Increased PTH levels have been associated with genetic variations in or near genes involved in vitamin D production and calcium and phosphate transport, including these SNPs [33]:

Hyperparathyroidism has also been associated with mutations in:

Symptoms of high PTH levels include [20]:

The most important thing is to work with your doctor to find out what’s causing your high PTH levels and to treat any underlying conditions. High PTH levels are often caused by underlying diseases that require medical attention and can’t be fixed by lifestyle changes or supplements.

Discuss the complementary strategies listed below with your doctor. None of these strategies should ever be done in place of what your doctor recommends or prescribes!

Ways to decrease PTH levels or reduce the risk of developing hyperparathyroidism include:

If you are deficient in vitamin D or calcium, your doctor may prescribe supplements.

Hypoparathyroidism is the condition of having low or inappropriately normal blood parathyroid hormone levels.

Hypoparathyroidism usually leads to low calcium and high phosphate levels in the blood [45].

Causes listed below have been associated with low PTH. An abnormal PTH test can indicate there is a problem, but can’t pinpoint the cause. Your doctor will usually follow this result with additional testing to investigate why your PTH is low. Work with your doctor or another health care professional to get an accurate diagnosis.

About 75% of hypoparathyroidism cases are the result of neck surgery, such as for the removal of the thyroid or parathyroid glands [46].

About 75% of the hypoparathyroidism cases following surgery are transient (temporary) and PTH levels return to normal in less than 6 months [47].

Low vitamin D levels prior to surgery can increase the risk for post-surgical hypoparathyroidism. To minimize risk, it is recommended that pre-surgery vitamin D levels in the blood are at least 20 ng/dL [44].

Autoimmune disease is the second most common cause of low PTH [48, 49].

3) Damage To the Parathyroid Gland

Damage to the parathyroid gland due to radiation, iron or copper deposition, or cancer metastasis can decrease PTH [49].

Drugs that can decrease PTH levels include:

These genetic disorders and their related genes are associated with hypoparathyroidism [45]:

Mutations in these genes have been associated with hypoparathyroidism [52, 53, 54]:

The low calcium levels caused by hypoparathyroidism most commonly lead to problems with muscles and the nervous system [45].

The high calcium intake used to treat low PTH levels can cause kidney stones and increase the risk of developing chronic kidney disease [45].

Bone mass density is usually higher in patients with chronic hypoparathyroidism. Whether that is due to treatment with calcium and vitamin D supplements or low PTH levels reducing bone restructuring, or whether it is a combination of the two is unclear [45].

Many people with hypoparathyroidism report a reduced quality of life, including fatigue, depression, anxiety, and cognitive difficulties [44].

The most important thing is to work with your doctor to find out what’s causing your low PTH levels and to treat any underlying conditions. Low PTH levels are often caused by underlying diseases which require medical attention and can’t be fixed by lifestyle changes or supplements.

Hypoparathyroidism is most commonly treated with calcium (1,000 to 9,000 mg/day) and vitamin D (0.25 to 2.0 ug/day of calcitriol) supplements. The goal is to maintain blood calcium levels at 8.0 to 9.0 mg/dL while avoiding high levels of calcium in the urine [44].

A synthetic parathyroid hormone (Natpara) was approved by the FDA as a treatment in 2015. However, long-term complications from its use are still being evaluated [56, 44].

Make sure your magnesium levels are in balance. If they are on the low end, you may benefit from taking magnesium supplements [45]. Always consult your doctor before taking supplements.

Use of Parathyroid Hormone to Treat Osteoporosis

Because parathyroid hormone is a key controller of bone building, it is an important factor in many bone disorders.

A synthetic parathyroid hormone analog (teriparatide) has been used for treating severe osteoporosis. It is effective at building bone when given in intermittent, low doses [57, 58, 59].

In 2017, another parathyroid hormone-like medication, abaloparatide, was approved by the FDA for treating severe osteoporosis [60, 61].