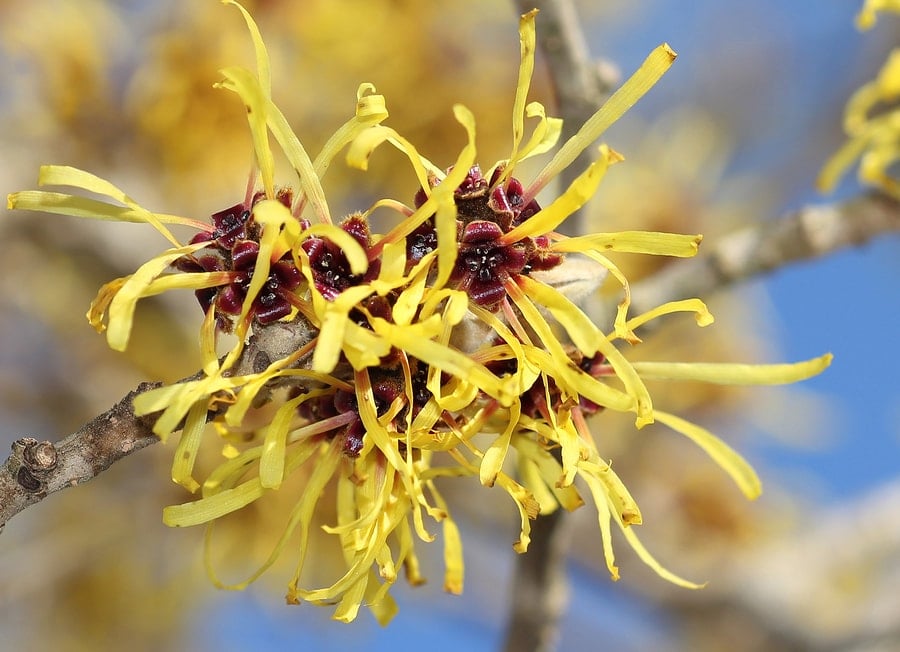 Witch hazel has been used by Native Americans for ages to treat a variety of skin problems. Science partly supports its use for rashes, acne, sunburns, and wounds. However, there are important limitations to consider. Read on to learn how to take advantage of this natural skin remedy.

What is Witch Hazel?

Witch hazel (Hamamelis virginiana) is a shrub that grows on the eastern coast of North America. It has leathery leaves and yellow, stringy flowers that bloom in the fall [1].

Witch hazel trees grow on rocky slopes near stream beds, in ravines and in forest understories, and can reach heights of up to 13 meters [2].

Native Americans have traditionally used it to treat a variety of conditions including insect bites, sore muscles, cuts, rashes, sunburn, hemorrhoids, and bruises [1].

Witch hazel is safe and approved for external use and can be purchased over the counter in the form of creams, infused pads, and liquids [3].

Many of the positive health effects of witch hazel have been linked to polyphenolic molecules [4, 5].

A subset of these molecules, commonly known as tannins, is what gives the plant its anti-inflammatory, antioxidant, blood vessel-narrowing (vasoconstrictive), and skin-tightening (astringent) effects. Tannins make up between 3 to 12% of the leaves and bark of witch hazel [5, 6].

These tannins include catechins, gallotannins, cyanidin, and proanthocyanidins [6].

Researchers believe that the antioxidant effects of witch hazel come from the activity of gallate esters (a specific chemical structure attached to tannins), as well as flavonoids, which protect DNA from damage by eliminating free radicals [5, 7, 8, 9].

It is likely that the antibacterial properties of witch hazel extracts are due to the alcohol they contain [12, 13].

One tannin in witch hazel extracts, hamamelitannin, can counteract the effects of tumor necrosis factor (a signaling protein involved in inflammation and cell death), possibly reducing swelling, itchiness, and rashes [14].

One study on 309 children showed that an ointment containing witch hazel was equally effective as dexpanthenol in improving skin irritations such as minor cuts or diaper rash [17].

An observational study of 1,373 patients with irritated or itchy scalp found that using witch hazel products for 4 weeks significantly improved symptoms in the majority of patients [19].

No valid clinical evidence supports the use of witch hazel for any of the conditions in this section. Below is a summary of up-to-date animal studies, cell-based research, or low-quality clinical trials which should spark further investigation. However, you shouldn’t interpret them as supportive of any health benefit.

A clinical study of 20 postmenopausal women found that applying a moisturizing cream containing witch hazel significantly improved vaginal dryness in 80% of participants. However, this study lacked a control group, making the results questionable [20].

An analysis of the ingredients of 52 acne medications found that witch hazel is commonly found in these products, due to its astringent property that reduces the size of pores [21].

Witch hazel killed common skin bacteria (such as Staphylococcus aureus and Candida albicans) in cell studies, as well as in 15 healthy human subjects [12].

No clinical evidence supports the use of witch hazel for any of the conditions listed in this section. Below is a summary of the existing animal and cell-based studies; they should guide further investigational efforts but should not be interpreted as supportive of any health benefit.

A cell-based study found that an extract of witch hazel bark may have antiviral properties against the common herpes simplex virus type 1 (HSV-1), otherwise known as oral herpes [26].

According to one clinical review, witch hazel creams are ineffective in relieving childhood eczema [29].

In a study of 72 human participants, hydrocortisone cream was more effective for eczema than witch hazel extract [30].

Witch hazel water, purchased over the counter, may not contain tannins and therefore lack the astringent (skin tightening) effects and some other healing properties [31].

More scientific research is needed on the efficacy of witch hazel as a treatment for hemorrhoids, as this potential benefit is currently only supported by its historical use in traditional medicine and personal experiences.

External use of witch hazel is likely safe, although some users with sensitive skin may experience an allergic reaction in rare cases [31, 2].

Excessive oral intake of witch hazel liquids may cause nausea, vomiting, or more serious digestive problems, while ingesting it in adequate amounts is possibly safe [32].

Due to the lack of safety data, pregnant and breastfeeding women should avoid ingesting witch hazel.

The below doses may not apply to you personally. If your doctor suggests using witch hazel, work with them to find the optimal dosage according to your health condition and other factors.

When using an over-the-counter witch hazel alcohol extract, soak a cloth with the extract and apply it to the affected area.

The leaves can be eaten or made into a tea, although there is no solid clinical evidence supporting its beneficial effects when taken this way.

The opinions expressed in this section are solely from the users who may or may not have a medical background. SelfHacked does not endorse any specific product, service, or treatment. Do not consider user experiences as medical advice. Never delay or disregard seeking professional medical advice because of something you have read on SelfHacked.

One user who suffered from recurring rashes in skin folds found witch hazel cream to be the best way to stop itchiness and reduce rashes.

One user who suffered from hemorrhoids claimed that a witch hazel-infused pad was more effective than Preparation H for relieving pain.

One user reported using witch hazel to relieve canker sores, to stop insect bites from itching, to speed up the healing of cuts, and also as an aftershave.

One user who struggled with acne for many years found witch hazel “helped her skin to be clearer than it’s ever been since I’ve had acne.”

However, one user found that using witch hazel made their acne worse, and suggested that it should not be used continually if improvements are not seen.