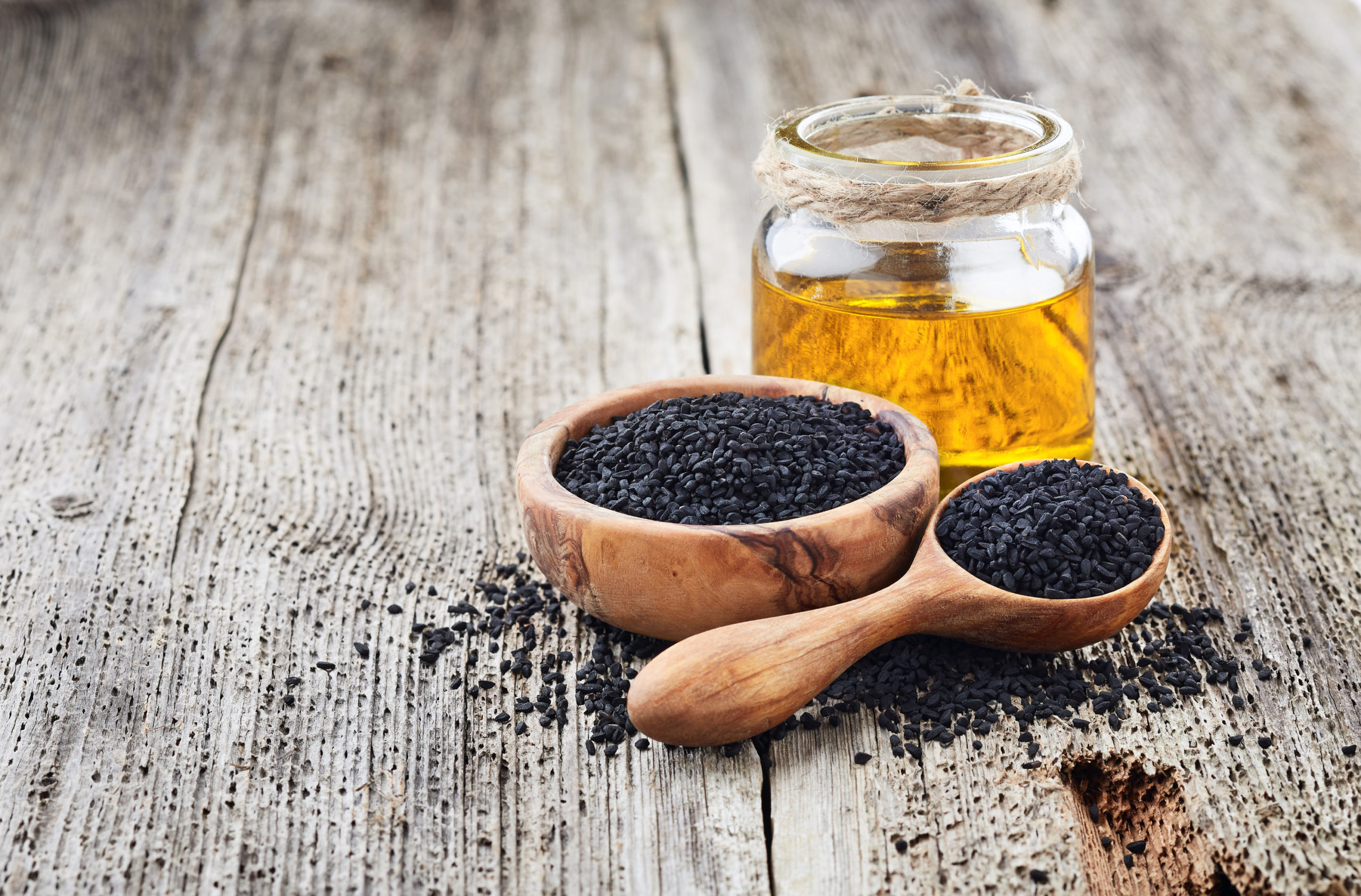 Black seed has many traditional uses and can be taken as a spice, extract, or oil. Despite being touted as a “miraculous herb,” many of its traditional uses have not been validated by proper scientific studies. Read on to learn more about the potential side effects of black seed oil and how to safely use it.

What is Black Seed Oil?

Black seed is also sometimes called black cumin (or black cumin seed), although this can be misleading. Cumin or Cuminum cyminum is a spice with few overlapping benefits that belongs to an entirely different plant family than black seed.

In this article, any mention of black seed or black cumin refers specifically to Nigella sativa.

Nigella sativa raw seeds, seed oil, or seed extract have been traditionally used alone or in combination with other ingredients for various health conditions, such as eczema, cough, headache, diabetes, asthma, infections, and high blood pressure [1].

Few of the claims that come from its traditional reputation in various cultures have been researched, while most others lack scientific evidence and rely on findings from studies in cells or animals [2].

Additionally, black seed supplements have not been approved by the FDA for medical use. In general, dietary supplements lack solid clinical research. Regulations set manufacturing standards for supplements but don’t guarantee that they’re safe or effective. Speak with your doctor before supplementing.

Black seed or Nigella sativa is a flowering plant with a long history of traditional use. It should not be confused with cumin, an completely different spice.

What Does Black Seed Oil Do?

Black seeds have been used in Middle Eastern, Asian, and European folk medicine as a natural remedy for a wide range of diseases for over 2000 years [2].

In Islamic cultures, its use has a strong religious background. Islamic literature claims that regular use of black seed is “a cure for every disease (except death),” which earned this spice the Arabic approbation “The Blessed Seed.” Black seed is also considered an important remedy in Ayurveda [2].

Black seed has a specific bitter taste and smell and is often added to confectionery and liquors. The oil can be used to add flavor to various dishes, but people also traditionally apply it on the skin as an alleged painkiller and antiseptic.

Despite its cultural significance, the traditional uses and purported health benefits of black seed remain unproven.

People have been using black seed as a culinary and medicinal spice for millenia, particularly in the Middle East. Yet, many of its traditional uses remain to be scientifically researched.

Black seed is a source of the following nutrients:

The main and most researched active ingredient in black cumin seed oil is thymoquinone. Thymoquinone has been studied for protecting the liver, reducing inflammation, and as an antioxidant. It’s also being examined in cancer research. Additionally, the seeds contain alpha-Hederin, another ingredient that’s being studied in cancer cells [2, 5].

Black seed contains vitamins, minerals, fatty acids, and bioactive compounds that are being researched as antioxidants and liver-protectants.

The following molecular targets have been identified by scientists in cell-based and animal studies. They do not translate to health benefits but help guide further research.

Get The Regimen of a Top Biohacker

Activity in the Lungs and Trachea

Proper safety trials with black cumin seed oil and its active ingredients have not been carried out. Limited evidence suggests that black seed is safe when used as a spice [18].

Black cumin seeds can cause abortions in larger amounts [19]. Also, clinical studies have not confirmed that it is safe to use in pregnancy even in smaller amounts or in children.

The following side effects have also been reported in people using black seed oil by mouth:

Although there are no other reported cases of black seed oil causing kidney-related side effects, caution is advised, particularly in people with diabetes and/or kidney disease.

In theory and based on its possible health effects, black seed oil may also interact with blood thinners, sedatives, immune-suppressants, and diuretics.

Have in mind that herb-drug interactions can be dangerous and, in rare cases, even life-threatening.

Always consult your doctor before supplementing and let them know about all drugs and supplements you are using or considering.

Black seed oil it is thought to be generally safe when used as a spice. Possible side effects include skin allergies and gut complaints.

How to Use Black Seed Oil

Because black seed oil is not approved by the FDA for any condition, there is no official dose. Users and supplement manufacturers have established unofficial doses based on trial and error.

A typical dose of the oil, recommended by most manufacturers, is 2.5 – 5 ml 2X daily.

As crushed or powdered seeds, the dosage is typically about 1 g per day.

The active ingredient, thymoquinone, given to advanced cancer patients was tolerated up to 2.6 g/day. The essential oil can contain up to 30% of thymoquinone [22, 23].

Discuss with your doctor if black seed oil may be useful as a complementary approach in your case and which dose you should take.

Scientists are exploring whether garlic extract and black cumin seed oil may work better together to combat parasites [24].

Black cumin seed and garlic together may work together to lower high cholesterol, though the evidence is inconclusive [25].

Most people use black seed oil for general wellness and to boost energy. We came across several reviews that mention the oil is good for immune support, seasonal allergies, and cold prevention. But since it has an unpleasant taste and triggers a burning sensation, most users recommend combining it with orange juice, tea, or adding it to smoothies.

Some users tolerate black seed oil well and report only mild nausea or stomach upset at first. Others, however, seemed to struggle with serious gut-related side effects like vomiting, diarrhea, and subsequent dehydration.

One person who took black seed oil for libido enhancement didn’t experience any benefit. On the contrary, their mood worsened and they stopped taking the oil.

People who take black seed oil for hair growth and skin health are mostly happy with the results, though headaches and itching are frequent complaints.

Black seed or Nigella sativa is a flowering plant with a long history of traditional use, particularly in the Middle East. It should not be confused with cumin, a completely different spice with distinct potential health benefits.

Black seed is thought to be generally safe when used in amounts found in food, but skin allergies and gut complaints have been reported. It may also cause uterine contractions, which is why pregnant women should avoid it. Be sure to consult your doctor before supplementing.

Ever try supplements that don’t seem to work? People respond differently to diets and supplements because everyone has unique DNA. SelfDecode provides recommendations that are personalized based on YOUR genes to give superior results.