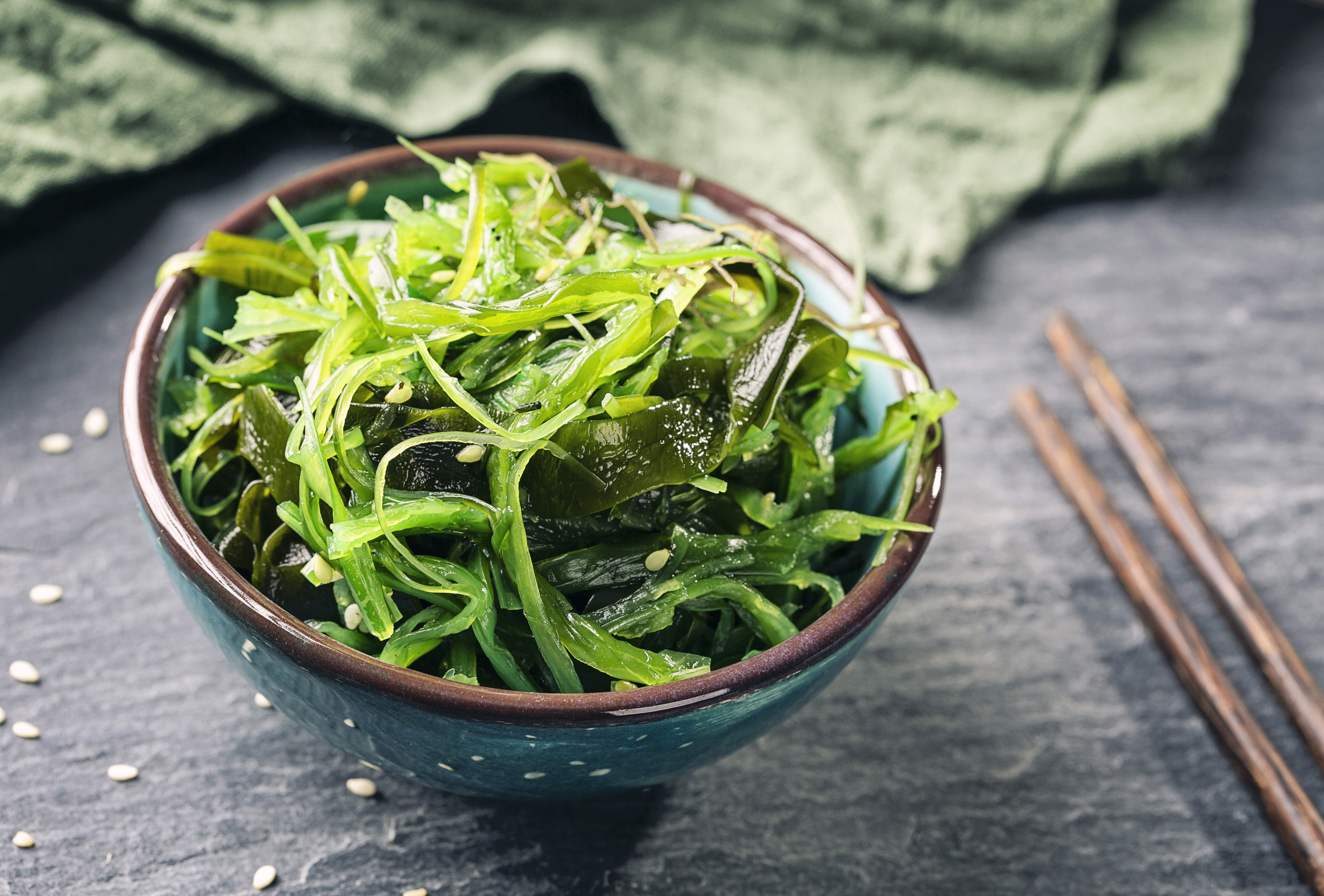 Fucoxanthin is an antioxidant compound (concretely, a carotenoid) found in brown seaweed. It is claimed to help combat a variety of health issues including obesity, diabetes, and inflammation, although clinical trials are lacking. Read below to discover the potential benefits and side effects of fucoxanthin.

Fucoxanthin belongs to a class of plant compounds called carotenoids, which confer yellow, orange, or red color. The structure of fucoxanthin makes it different from other plant carotenoids (it has an unusual allenic bond, a 5,6-monoepoxide, and 9 conjugated double bonds).

This unique structure contributes to its instability, which makes fucoxanthin difficult to study. However, this same structure is exactly what confers its potential to help with health issues such as obesity, diabetes, and inflammation [1].

Fucoxanthin’s anti-obesity effects are thought to be mediated through its ability to influence gene expression of the following genes related to fat metabolism, as seen in rat studies [1]:

The following purported benefits are only supported by limited, low-quality clinical studies and animal and cell-based research. There is insufficient evidence to support the use of fucoxanthin for any of the below-listed purposes. Remember to speak with a doctor before taking fucoxanthin supplements and never use it as a replacement for approved medical therapies.

Fucoxanthin also promoted weight loss in obese mice (due to both high-fat diets and diabetes), especially in combination with fish oil [6, 7].

A single clinical trial (testing fucoxanthin in combination with pomegranate seed oil) and some animal research cannot be considered sufficient evidence to claim that fucoxanthin helps with weight loss. Further clinical trials are needed to validate these preliminary findings.

In a survey of over 1,700 pregnant women, increased consumption of seaweed (which contains fucoxanthin) was associated with a decrease in depression during pregnancy [8].

A single study is insufficient to attest to the effectiveness of fucoxanthin in reducing depression. Most importantly, the study was associational, meaning a cause-effect relationship couldn’t be established. Other dietary, environmental, and genetic factors could have contributed to the effects observed.

No clinical evidence supports the use of fucoxanthin for any of the conditions listed in this section. Below is a summary of the existing animal and cell-based research, which should guide further investigational efforts. However, the studies should not be interpreted as supportive of any health benefit.

In mice exposed to ultraviolet radiation, fucoxanthin applied to the skin blocked the premature aging of the skin and protected skin cells from sunburn [9].

However, high doses of fucoxanthin increased blood cholesterol in mice [18].

Fucoxanthin reduced oxidative stress and increased the levels of the antioxidant glutathione in cell-based studies [19, 20].

In menopausal mice, fucoxanthin prevented bone loss. In cells, it blocked the development of the cells that promote bone breakdown (osteoclasts) [21].

Based on its ability to reduce risk factors such as blood cholesterol, inflammation, obesity, and diabetes, fucoxanthin may help prevent heart disease [22, 1].

Only one clinical trial and one observational study have been conducted, and most potential health effects have only been tested in animals and cells. Because the trial used fucoxanthin combined with pomegranate oil and the observational study evaluated the intake of seaweed instead of purified fucoxanthin, the specific contribution of this carotenoid to the effects observed is difficult to estimate.

Keep in mind that the safety profile of fucoxanthin is relatively unknown, given the lack of well-designed clinical studies. The list of side effects below is not a definite one and you should consult your doctor about other potential side effects based on your health condition and possible drug or supplement interactions.

No adverse effects were observed in the only clinical trial conducted [5].

In mice, fucoxanthin didn’t increase the rate of mutations and wasn’t toxic to the kidney, liver, spleen, and gonads. The only adverse effect observed at high doses was increased blood cholesterol [18, 24].

Fucoxanthin can inhibit the enzyme CYP3A4, which is responsible for the metabolism of approximately 45-60% of prescribed drugs. This may enhance the effects of the drugs by increasing their blood levels, but also reduce their activation if the drugs are administered as a pro-drug that needs to be broken down into its active form [25, 26, 27, 28, 29].

The following drugs are metabolized by CYP3A4, meaning fucoxanthin may affect their effectiveness:

Because fucoxanthin is not approved by the FDA for any condition, there is no official dose. Users and supplement manufacturers have established unofficial doses based on trial and error. Discuss with your doctor if fucoxanthin may be useful as a complementary approach in your case and which dose you should take.

The only human trial carried out tested a dose of 0.8-4.0 mg fucoxanthin combined with pomegranate seed oil [5].

The opinions expressed in this section are solely those of fucoxanthin users, who may or may not have medical or scientific training. Their reviews do not represent the opinions of SelfHacked. SelfHacked does not endorse any specific product, service, or treatment.

Weight loss was by far the most common use of fucoxanthin. Fucoxanthin pill users were often satisfied and reported weight reduction without needing to increase physical exercise.

Similarly, several users of fucoxanthin patches claimed that they worked well to increase weight loss and energy. However, some of them complained that the effect was slow and the patches didn’t help decrease appetite.