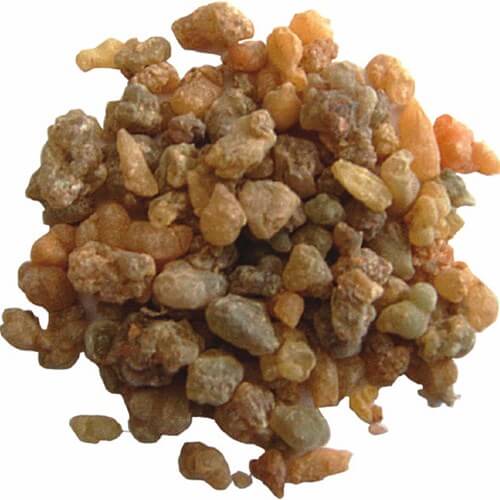 Boswellia resin or frankincense is an age old natural remedy and a tool for spiritual ceremonies. Folks have used it to relieve pain and inflammation, heal the joints, improve blood flow, and more. Modern research supports many of its traditional uses and reveals other potentials. Read on to learn the benefits, dosage, and side effects of Boswellia.

Boswellia resins, also known as frankincense/olibanum, are obtained from Boswellia trees. Incisions are made in the trunks of the trees to produce exuded gum, which appears as milk-like resin and hardens into orange-brown gum resin [1, 2].

There are many Boswellia species and varieties, including Boswellia sacra from Oman and Yemen, Boswellia carteri from East Africa and China, Boswellia frereana from Somalia and Boswellia serrata from India.

Today the most traded frankincense is produced in Oman, Yemen, and Somalia. Boswellia resins have been considered throughout the ages to have a wealth of healing properties [3].

Since ancient times, frankincense has been used in Africa, China, India, and the Middle East for the prevention and treatment of various illnesses, especially chronic inflammatory diseases [3].

Resins from this herb have been traditionally used to treat rheumatoid arthritis and other inflammatory diseases such as Crohn’s disease [1].

Boswellia serrata is one of the most valued ancient herbs in Ayurveda. In the Indian system of medicine, it has been used as an anti-inflammatory, anti-arthritic, and analgesic agent [4].

In Traditional Chinese Medicine, frankincense of B. carterii is commonly used as a remedy for improving blood circulation and relieving pain [3].

Modern medicine and pharmacology support some of the Boswellia’s anti-arthritic, anti-inflammatory, heart-friendly, pain-relieving and liver-protecting properties [4].

The four major boswellic acids found in frankincense are responsible for the inhibition of pro-inflammatory enzymes [3]:

KBA is the most potent anti-inflammatory component of the resin and selectively blocks leukotriene biosynthesis by inhibiting 5-lipoxygenase activity [2].

Different types of Boswellia extract were able to reduce pain and improve knee function in three studies of 145 osteoarthritis patients [8, 9, 10]

Wound-healing, anti-ulcer, and anti-diarrhea properties of Boswellia have been cherished in traditional medicine for ages [11, 12].

It was effective in the treatment of 30 patients with chronic colitis with minimal side effects [14].

In studies on rats, it showed anti-inflammatory and antioxidant effects, inhibiting inflammation in acute colitis and preventing diarrhea [16, 17, 18].

One study showed no superiority of Boswellia versus placebo in patients with Crohn’s disease, another form of IBD [19].

In another study, a cream with 2% Boswellia extract (twice daily for 5 weeks) significantly reduced skin redness and irritation caused by radiotherapy. It decreased the need to use cortisone cream by 60%, compared to placebo [21].

In 59 patients with psoriasis, scales, or skin irritation, the same product soothed the skin and improved the symptoms in 50-70% of cases [22].

A combination of boswellic acid, betaine, and myoinositol relieved breast pain and reduced benign breast lumps (fibroadenoma) in a study of 76 women. This treatment also reduced breast tissue density by 60% [23].

In another trial of 64 younger women, the same combination reduced the volume of benign breast lumps by 18% on average (vs. 6% placebo) [24].

Administering 3600 mg/day of Boswellia extract, 7 days prior to surgery, reduced the fluild around the tumor by 70% in 8/12 patients with malignant glioma (brain cancer). The signs of brain damage further decreased during the treatment [26].

In another trial, an ethanolic extract of the gum resin of B. serrata reduced brain swelling due to by 22-48%. However, crucial details such as sample size are not available [27].

The use of Boswellia for this indication is still experimental and requires strict medical supervision.

Boswellia has traditionally been valued for its effect on the respiratory system and has been used in steam inhalations, baths, and massages to treat a cough, catarrh, bronchitis, and asthma [28].

Boswellic acids found in frankincense is responsible for the inhibition of leukotriene biosynthesis and, therefore, may reduce and prevent inflammation in many chronic condition like asthma [29].

Gum resin of B. serrata improved the symptoms of bronchial asthma—such as difficulty breathing, wheezing lung sound, and the number of attacks—in a study of 40 patients [29].

In a study of 75 girls, the extract and powder of frankincense prevented plaque-induced gingivitis (gum inflammation) [30].

No valid clinical evidence supports the use of Boswellia for any of the conditions in this section. Below is a summary of up-to-date animal studies, cell-based research, or low-quality clinical trials which should spark further investigation. However, you shouldn’t interpret them as supportive of any health benefit.

Boswellia is traditionally used to improve learning and memory [3].

B. papyrifera showed significant improvement in visuospatial memory in 80 multiple sclerosis (MS) patients but had no effect on verbal memory and information processing speed [31].

B. serrata enhanced cognition in a study of 38 patients with nerve injury, but didn’t significantly improve overall outcome [32].

Young rats whose mothers were treated with this herb in pregnancy showed improved cognition and an increase in the volume of hippocampal neurons [33].

In a rat epilepsy model, Boswellia extract improved learning ability and eliminated the adverse effects of seizures on cognitive function [34].

Despite the promising preliminary results, more studies are needed to investigate the pro-cognitive effects of Boswellia.

B. serrata significantly increased the pain threshold and pain tolerance in 12 healthy volunteers [41].

Oral B. serrata reduced the intensity and frequency of headaches in four patients with CCH (chronic cluster headache) [43].

This study lacked a control group and had a tiny sample, so it doesn’t allow for conclusions.

No clinical evidence supports the use of Boswellia for any of the conditions listed in this section. Below is a summary of the existing animal and cell-based studies; they should guide further investigational efforts but should not be interpreted as supportive of any health benefit.

Scientists observed the potential of B. serrata extract to prevent liver injury in one animal study [46].

In chronic hepatitis-associated fibrosis in mice, the combined oral administration of Boswellia and Salvia extracts improved the course of the disease [48].

The findings discussed below stem from animal and cell-based studies only. They should guide further investigation but shouldn’t be interpreted as supportive of the anticancer effects until more research is done. Boswellia supplements aren’t approved for cancer prevention or treatment

Boswellia and its components were able to kill different types of cancer cells in test tubes, but this doesn’t imply the same anticancer effects in living organisms [55, 56, 3, 57, 58, 59, 60].

More research is needed before making any conclusions about the potential anticancer effects of Boswellia.

Boswellia species (B. carteri and B. papyrifera) combat fungi and B. rivaehas showed the best activity against Candida albicans [70].

Boswellia (frankincense) has not shown any major side effects and is considered safe. Possible side effects are mild and include [15, 3]:

Boswellia resin has remarkably low toxicity. It’s included in the list of safe substances and its use is permitted by the US Food and Drug Administration (USFDA) as a food additive [R, R].

It’s even safe during pregnancy and lactation in the amounts found in food, but the safety of therapeutic doses (from supplements) hasn’t been evaluated. Speak with your doctor before supplementing.

A repeated dose oral (90 days) toxicity study of Boswellia serrata was carried out in rats, and Boswellia was relatively safe up to the dose of 500 – 1,000 mg/kg. No adverse impact on health was observed [71, 72].

In a routine toxicity study, Boswellia resin and AKBA showed moderate to low toxicity on the skin [73].

The below doses may not apply to you personally. If your doctor suggests using Boswellia, work with them to find the optimal dosage according to your health condition and other factors.

Boswellia (frankincense) is generally taken as a capsule, tablet or its bark decoction orally [4].

The suggested dosage for inflammatory or asthmatic conditions is 300-400 mg of the standardized extract (containing 60% boswellic acids) three times daily [3].

How to Take It

According to some research, plasma levels of boswellic acids become detectable only when administered with a high-fat meal [76].

Some people have genes that make them more likely to experience inflammation. SelfDecode’s DNA Wellness Reports give you genetic-based diet, lifestyle, and supplement tips that can help reduce inflammation levels. The recommendations are personalized based on YOUR DNA.