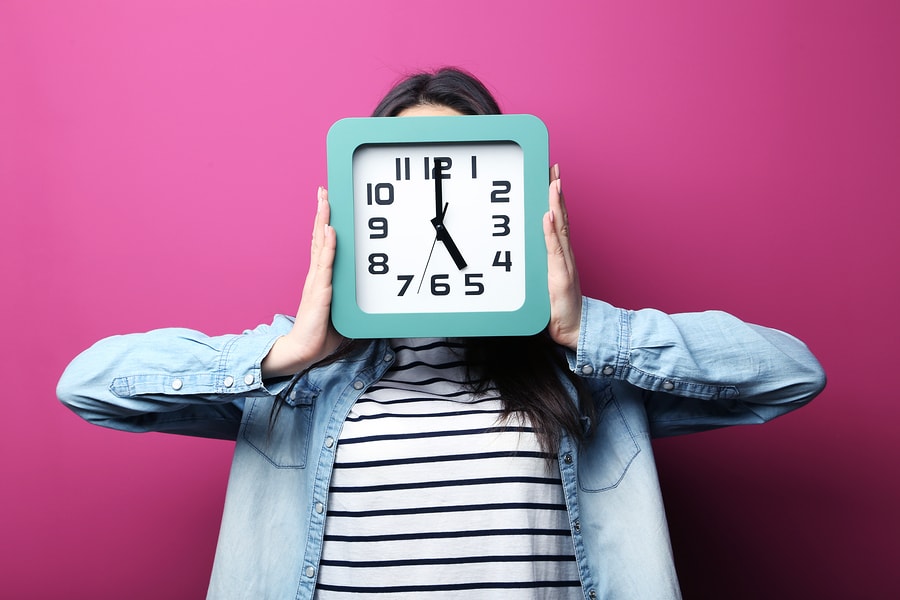 Circadian rhythm is extremely important for our overall health and wellbeing. Chronotherapy makes use of the body’s circadian rhythm to help with mood, eating, and sleep disorders. Read on to learn more about the benefits and advantages of chronotherapy, as well as its potential side effects.

Chronotherapy is a drug-free therapeutic intervention that exploits the body’s circadian rhythms through changes in sleep/wake cycles and daily light exposure [1].

Chrono is derived from the Greek word khrono which means time. Hence, chronotherapy aims to reset a dysregulated circadian rhythm (biological clock) of an individual to normal sleep/wake cycles.

Increasingly, chronotherapy also refers to administering medications in accordance with circadian rhythms to achieve optimal effects along with reducing unwanted side effects in the body (treatment scheduling).

Recently, chronotherapy has received increased attention because of a deeper understanding of the importance of circadian rhythms in health and diseases for humans.

The focus of the article will be on the use of chronotherapy as a behavioral intervention and its use in the treatment of mood disorders.

What Is Circadian Rhythm? 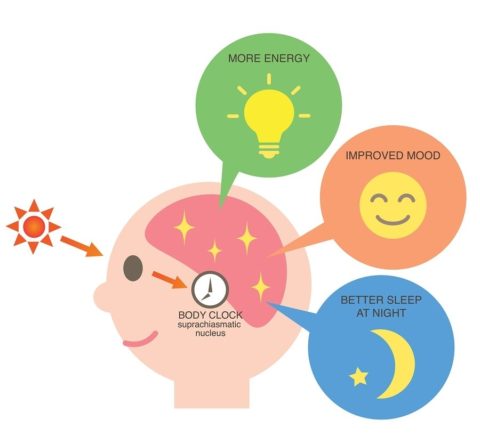 All living beings have an approximately 24-hour light/dark cycle that maintains biological processes, which is known as the circadian rhythm.

In humans, the circadian rhythm is maintained by an internal biological clock (also known as the circadian clock) in the hypothalamus region of the brain [2].

The circadian rhythm, whilst being produced by the internal biological clock, is also entrained by external environmental signals, such as daylight [3].

Reports have shown that internal body time varies by 5 – 6 hours in healthy humans and by as much as 10 – 12 hours in shift workers. These misalignments may actually contribute to various diseases and disorders, including obesity and psychiatric conditions [4, 5].

Bright light therapy involves receiving high-intensity, fluorescent illumination coming from a specially designed light box for 10 – 90 minutes each morning. People are free to engage in other activities such as reading whilst undergoing therapy.

It is relatively simple to administer but the specific light dosing and optimal treatment time of day may need adjustment on an individual basis [6].

It is has also been used for non-seasonal depression, with modest success [10].

It can be used as an adjunct treatment with antidepressants to augment the effect of the drug [11, 12, 13].

Studies suggest light exposure from this therapy may help in synchronizing the circadian rhythms of neurotransmitters that are affected in depression [14].

Like the name of the therapy suggests, it involves completely avoiding sleep for one to three cycles (whole night and the following day) mixed with nights of recovery sleep [15].

The advent of wake therapy/ sleep deprivation therapy in the 1970s was a significant advancement because of the immediate beneficial effects it produced on reversing depressive symptoms (within 24 hours) [16].

Since then, a large number of studies have reported the efficiency of this therapy in diminishing depressive symptoms – it appears to help in 40 – 60% of patients [17, 18, 19].

A recently published meta-analysis of 66 independent studies reported a significant beneficial effect of sleep deprivation therapy on depressive symptoms. This was regardless of the way the therapy was administered, age or gender, or how depressive symptoms were measured [20].

Sleep phase advance therapy involves moving bedtime and wake time forward (for instance, 5 pm to 12 am midnight) until a normal sleep/wake cycle (for instance, 11 pm to 7 am) is achieved and maintained.

This therapy has been used in conjunction with the wake/sleep deprivation therapy to alleviate depressive symptoms in both patients on and off antidepressants [21, 22].

Sleep phase advance therapy was also shown to reset the circadian clock in patients with delayed sleep phase disorder (DSPD). These patients have trouble sleeping at midnight and experience difficulties with waking up in the morning [1].

In a study in humans, a rapid decrease in depressive symptoms was reported in 13 patients who did not respond to antidepressants, upon undergoing treatment with triple chronotherapy. These patients showed no obvious short-term side effects to the triple chronotherapy [25].

While promising, these studies involve a small number of people. Larger, well-designed studies are needed to establish the benefits of triple chronotherapy.

The first clinical trial that investigated bright light therapy as a treatment option for seasonal mood disorders in 1984 reported an antidepressant effect in 29 patients [26].

Although most studies have been performed on adults with seasonal mood disorder, a small number of studies have also been done on children and adolescents [29, 30].

For example, in one study (DB-PCT), bright light therapy was found to be an effective treatment in 28 children (aged 7 to 17 years) who suffered from seasonal mood disorder [31].

A meta-analysis of 9 trials suggests that bright light therapy appears efficacious when administered for 2-5 weeks as monotherapy [32].

In a human study (RCT) of 75 adults with major depression, triple chronotherapy resulted in a better response to an antidepressant drug (duloxetine) which was also long-lasting compared to the patient group treated with exercise [33].

Major depressive episodes that occur in patients with bipolar disorder are termed as bipolar depression [35].

Resistance to drugs (antidepressants) has been a major hurdle when it comes to treating patients with bipolar depression.

In a study of 60 patients with bipolar depression, a combination of bright light therapy and sleep deprivation therapy was administered along with antidepressants and lithium. 70% of patients with no history of drug resistance showed a reduction in depressive symptoms after chronotherapy treatment, and 57% of patients continued to feel better even after 9 months [36].

4) May Help With Eating Disorders

In eating disorders (bulimia nervosa and anorexia nervosa), the circadian rhythms associated with food intake and body temperatures are abnormal and out of sync.

In patients with delayed sleep phase disorder and insomnia, chronotherapy helped to reset their disturbed circadian clocks with a treatment schedule [39].

The patients also benefited from chronotherapy since they could end their dependence on hypnotic medications [39].

It is also important to note that drug chronotherapy (timing of medication in accordance with circadian rhythms) may have beneficial effects in the following diseases:

All therapies that fall under the umbrella of chronotherapy aim to tweak the body’s natural circadian rhythms. They may or may not be used in conjunction with drug treatments such as a combination of triple chronotherapy with antidepressants for the treatment of major depression.

All forms of chronotherapy (bright light, sleep deprivation, sleep phase advance) require little use of equipment and are more of lifestyle changes for the duration of the treatment. The results from studies also highlight the sustained effect of triple chronotherapy treatments.

Triple chronotherapy regimes have a specific beginning, middle, and end. This makes it easier for the patient to anticipate the changes in their sleeping patterns and/or bedtimes hence, enabling them to deal with the changes psychologically.

Since chronotherapy is drug-free, there are no drug-related side effects to the body.

However, in sleep phase advance therapy, one may feel sluggish since bedtime is progressively shifted 2-3 hours each day. A dip in productivity is only natural.

In bright light therapy, certain side effects like jitteriness, headaches, and nausea may occur due to exposure to high-intensity fluorescent illumination [52].

In addition, the following people should consult with their doctor and use caution when it comes to bright light therapy:

Although any form of chronotherapy is relatively simple to administer, it does require appropriate medical attention. There are factors that may need individual adjustment and monitoring of progress throughout the treatment and, hence, medical supervision is key.

Users report that using bright light therapy through the fall/winter months benefited them considerably and they noticed that their irritable and anxious seasonal mood changes were less frequent. All they had to do was purchase a light box that is easy to fit in your home or office space and use it regularly, at least during the winter months.