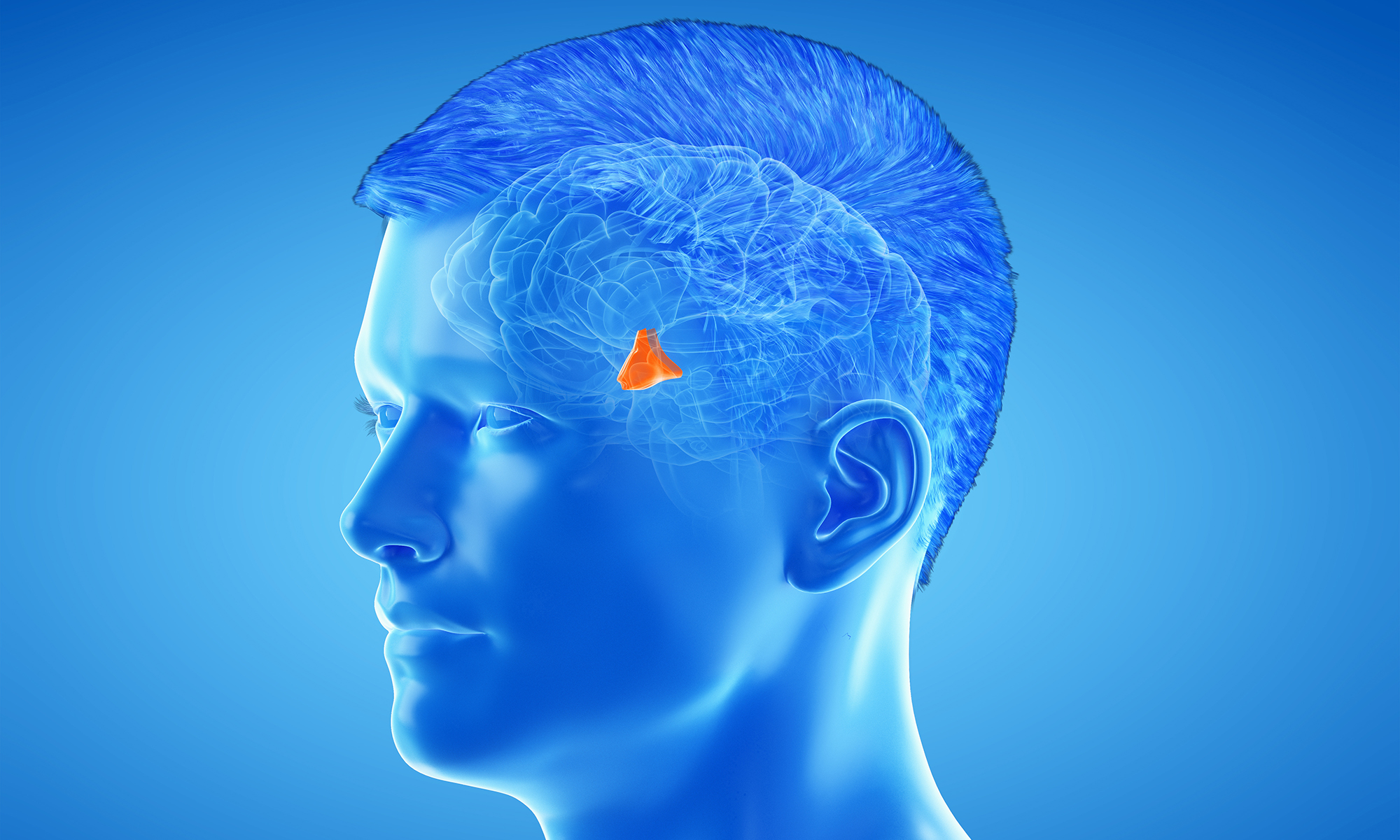 The hypothalamus is an extremely important part of the brain which is believed to be involved in controlling a diverse range of behaviors and bodily functions. For example, it has been proposed to be involved in regulating body temperature, the circadian rhythm, the stress response, the immune response, and even sexual behavior and sexual orientation. Read on to learn more about this important brain region, how it works, and how its activity may relate to many different important aspects of behavior and overall health!

What is the Hypothalamus?

The hypothalamus is a critical part of the brain, and is part of the limbic system. It is connected to other parts of the central and autonomous nervous systems, and receives many inputs from the brainstem in particular.

The hypothalamus is made up of several distinct “nuclei,” or groups of neurons, which each have specialized functions.

The hypothalamus is believed to play many important roles in the brain. It plays a role in releasing hormones, regulating appetite, thirst, sexual behavior and possibly even sexual orientation [1].

Parts of the Hypothalamus

The hypothalamus is made up of at least three distinct regions: the anterior region, the tuberal region, and the posterior region. Each region also has different areas within it.

The anterior region consists of the preoptic-, medial-, and lateral areas.

The tuberal region consists of medial and lateral areas.

The posterior region consists of medial and lateral areas.

Core Functions of the Hypothalamus

The hypothalamus is involved in responding both to internal states of the body (such as hunger or energy production) as well external stimuli (such as using light to adjust the circadian rhythm, or stimulating the stress response) [4].

The Hypothalamus and Stress

One of the important functions of the hypothalamus is to activate the stress response.

One of the ways it does this is by stimulating the pituitary gland, the adrenal gland, and the medulla, three other key parts of the brain that are involved in the body’s stress response. These other regions, in turn, release various hormones and other compounds that go on to cause the body’s stress response (such as by affecting energy usage throughout the body, heart rate, etc.) [5, 6].

Some of the compounds involved in the hypothalamic stress response include glucocorticoids and other steroid hormones [6].

Stress can also come from too much corticotropin-releasing hormone (CRH), which is produced by the hypothalamus. A variety of cytokines like IL-1, TNF and IL-6 can also stimulate the hypothalamus to release cortisol, further contributing to the body’s stress response

The hypothalamus may also play a role in “learning” how to respond to repeated stressors. For example, it is believed that stress triggers synaptic plasticity in the hypothalamus, which allows it to learn new patterns of responding to stressors, which it can then store for the next time a similar stressful event occurs [5].

The Hypothalamus and the Circadian Rhythm

The hypothalamus is believed to be one of the main brain areas responsible for controlling the body’s “biological clock,” technically known as the circadian rhythm.

One of the ways the hypothalamus adjusts the circadian rhythm is by using visual signals about light to tell what time of day it is. This, in turn, determines the daily and seasonal rhythms of other important bodily processes, such as body temperature and the sleep/wake cycle [7, 8].

Some researchers believe that abnormal activity in the hypothalamus could be involved in circadian rhythm disruption, and sometimes even insomnia [7, 8].

The Hypothalamus and the Immune Response

Because the hypothalamus is one of the main brain systems involved in regulating body temperature, it is also believed to play a role in how the body and brain respond to infections and other immune-related stimuli [4].

For example, the hypothalamus is believed to play a direct role in either increasing or decreasing body temperature when the immune system detects the presence of invading microorganisms, or other infectious agents. These changes in body temperature can help fight off the infection by making it harder for the invader to reproduce, thereby giving the rest of the immune system a better chance of fighting the infection off at an earlier stage [9].

The Hypothalamus Responds to Smells

The hypothalamus is believed to be one of the main brain areas involved in using smells (“olfactory stimuli”) to stimulate certain types of behavior [10].

Examples of behaviors that can be triggered by the hypothalamus in response to certain smells include emotional states and even sexual arousal [11, 12].

The hypothalamus is also believed to help regulate the release of many different hormones, which it does primarily by stimulating the anterior pituitary gland. In turn, the hypothalamic neuroendocrine cells are regulated by feedback signals from the endocrine glands and other factors, which help “fine-tune” the exact amount of the different hormones and other compounds that get released throughout the body and brain [13].

Some of the compounds that the hypothalamus responds to and helps to regulate include [13]:

The Hypothalamus and Fatigue

The lateral hypothalamus is believed to play a role in controlling fatigue via regulating inflammation as well as controlling the release of orexin.

The Hypothalamus and Mood

Motivation is believed to be partially based on the relative levels of epinephrine and dopamine in the hypothalamus, as well as the levels of orexin and MCH [14, 15]. Dopamine can activate orexin [16]. You can read more about how orexin affects our mood and motivation here.

The hypothalamus may also have a significant role in mood by determining the levels of corticotropin-releasing hormone (CRH), which can be found in the anterior region of the hypothalamus. For example, some researchers have reported that depressed patients often have elevated levels of CRH [17].

The Hypothalamus and Appetite Control

One of the main functions of the hypothalamus is believed to be the regulation and control of appetite and food intake, which in turn affects an organism’s overall energy homeostasis [18].

Generally speaking, the activity of the hypothalamus may be one of the most important factors in determining overall body weight.

The hypothalamus is believed to control appetite through the release and regulation of many different secondary hormones and other compounds, including orexin, ghrelin, NPY, T3, leptin, norepinephrine, serotonin, MCH, FGF21+19, and GLP-1 — all of which interact with each other in complex ways to regulate appetite and feeding behavior [20, 21, 22, 23].

More specifically, orexin, T3, ghrelin, MCH, FGF21, and NPY are generally believed to increase appetite, whereas leptin, insulin, norepinephrine, serotonin, GLP-1, and FGF19 are believed to function as appetite suppressants [24]. For example, low hypothalamic serotonin has been reported to lead to increased carb cravings, and low orexin has been linked to decreased appetite.

Finally, inflammation due to increased TNF has been associated with weight loss (primarily as a result of decreased hunger).

The Hypothalamus and Fear

The hypothalamus is believed to play a primary role in controlling “defensive behaviors,” as well as triggering fear states via its connections with the amygdala. See the picture below for a walkthrough on how this works.

When exposed to a dangerous situation, the hypothalamus will be stimulated, and the organism will display defensive behavior. In particular, the premammillary nucleus – which is located in the posterior region of the hypothalamus – is believed to play a central role in both learned and unlearned defensive responses to predators and other common natural stressors [26].

The Hypothalamus and Attention Problems

Some early evidence suggests that the hypothalamus may also be involved in regulating attention [15].

This potential function, together with its possible role in motivation, may partially explain why motivational and attentional issues often arise together [15].

Although the exact mechanisms are still being explored, it is believed that orexin, melanin-concentrating hormone [15], and the levels of dopamine [14] and acetylcholine [27] are involved in the hypothalamus’ potential role in attention.

The Hypothalamus and Sexual Orientation

Some interesting preliminary research suggests that the hypothalamus might be one of the main areas of the brain in which structural differences between men and women could play a key role in determining a person’s sexual orientation.