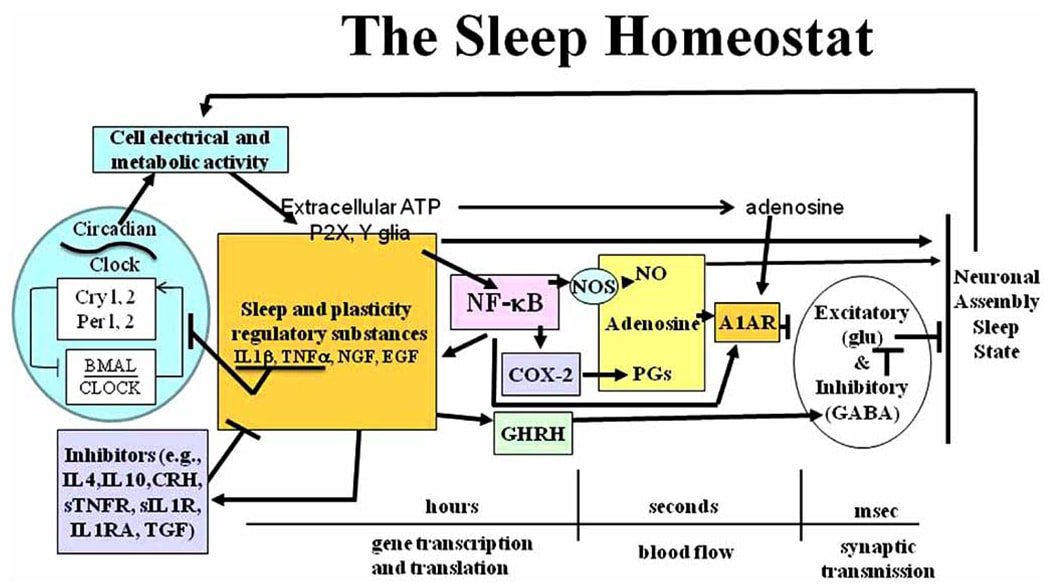 The physiology of sleep will help you understand the root causes of sleep problems and how you should approach them. In this post, we cover aspects of sleep physiology, focusing on the roles of neurotransmitters and other brain-derived factors in sleep control.

The neural control of sleep is like a seesaw between the sleep and wakefulness state, which is controlled by orexin neurons.

During sleep, neurons in the hypothalamus produce sleep neurotransmitters such as GABA and galanin and inhibit dopamine, histamine, norepinephrine and serotonin neurons (monoaminergic neurons).

Orexin, also called hypocretin, is a neuropeptide that increases arousal, wakefulness, and appetite. Orexin-producing neurons work during active wakefulness and stop during sleep [1].

The importance of orexin in the maintenance of sleep/wake cycle was first demonstrated by the fact that orexin deficiency caused narcolepsy in humans and animals [2, 3, 4, 5].

A lack of orexins correlates with narcolepsy. Approximately 90% of patients with narcolepsy (with cataplexy) show decreased orexin-A levels in the cerebrospinal fluid (CSF, the fluid surrounding the brain) [6].

Mice lacking the gene for orexin showed phenotypes similar to humans with narcolepsy and disruption of the hypocretin receptor 2 (Hcrtr2) caused canine narcolepsy [2, 7, 4].

Both noradrenaline and serotonin can inhibit the activity of orexin neurons [8, 9].

Loss of function in the orexin neurons is also involved in altered energy homeostasis, which could result in fatigue [10].

Read this post to learn more about the orexin system and ways to ensure it functions well.

Dopamine functions as a neurotransmitter and is crucial for arousal, memory and motor function [11].

Activation of the D2 dopamine receptor can have different effects at various doses. Low doses reduce wakefulness and increase Slow Wave and REM sleep, whereas large doses induce the opposite effect (predominant facilitation of the D2 postsynaptic receptors on the neurons that receive dopamine) [16].

Activation of the D3 receptor induces sleepiness and sleep in laboratory animals and man [16].

During wakefulness, there’s an increase in dopamine neuron activity, and an enhanced release of dopamine in multiple regions of the brain (VTA, the nucleus accumbens, forebrain) [16].

Serotonin is an important neurotransmitter for good mood, controlling appetite, and sleep. There are many serotonin (5-HT1-7) receptors, each of which can affect the brain differently. Serotonin is also a precursor to melatonin, the sleep hormone.

Serotonin neurons fire at a steady rate during wakefulness and decrease their firing during slow-wave sleep and virtually stop during REM sleep [18].

Supplementation of 5-HTP (a precursor of melatonin and serotonin, at a dose of 2 mg/kg) every night before bed could reduce the arousal level in children (aged 3 – 10) and induce a long-term improvement against nightmares with an effective reduction rate of 93.5% [19].

A small clinical trial demonstrated that the use of 5-HTP in combination with GABA significantly improves sleep quality in 9 subjects with sleep disorders, in comparison to placebo [21].

5-HT2A is the bad serotonin receptor because its activation can cause insomnia and reduce deep sleep [22].

5-HT7 receptors play an important role in the circadian rhythm, in addition to mood, pain sensation, and control of body temperature [23, 24, 25].

Norepinephrine (noradrenaline) is produced mostly in the locus coeruleus (LC) located in the pons region of the brain.

It is released from the sympathetic nervous system in response to stress. Because the release of norepinephrine affects other organs of the body, it is also referred to as a “stress hormone” [29].

This is why stress and anxiety can cause insomnia or reduce sleep quality.

LC neurons are highly active during wakefulness, slow fire during NREM sleep, and are almost completely inactive during REM sleep [35].

Norepinephrine also plays an active role in cataplexy, a condition characterized by transient weakness or paralysis. Blocking the norepinephrine receptor (α1AR) worsens cataplexy, whereas activation of these receptors decreases the number of attacks [36].

As a neurotransmitter, histamine promotes wakefulness. In the brain, histamine-releasing neurons are located in the hypothalamus (tuberomammillary nucleus) [37].

Histamine neuron firing ebbs and flows with the circadian rhythm. They are active during the day, stop working during drowsy states before sleep and resume activity at highly vigilant states after waking up [38].

Evidence for the role of histamine in sleep/wakefulness:

Although histamine promotes wakefulness through the activation of H1R, H2R, and H4R receptors, H3R has an opposite effect. H3R decreases histamine levels and promotes sleep [38, 45].

Are you constantly tired, no matter how much sleep you get?

Doctors try to pass off Chronic Fatigue as a last resort diagnosis, but as many will tell you, the problem is very real.

The SelfDecode Fatigue DNA Wellness Report analyzes over 8,000 variants tied to this condition to give your genetic risk score! Get personalized recommendations to help fight genes trying to zap your energy.

I'm Tired of Being Tired!

GABA is the main inhibitory neurotransmitter in the brain. The activation of GABA(A) receptors favors sleep. More than 20% of all brain neurons produce GABA [46, 47].

There are mainly two classes of receptors: GABA(A) and GABA(B).

Many drugs that treat sleep loss conditions target these GABA receptors, thus promoting sleep. Drugs blocking the GABA(A) receptors have been researched for disorders such as insomnia, epilepsy, and narcolepsy [48, 49].

The GABA(B) receptor blockers increase active brain states such as when we’re awake or in REM sleep (dreaming stage) [46].

After long periods of supplementation with GABA/5HTP, the natural production of GABA receptors increased, which assisted with natural sleep cycles and the promotion of healthy sleep [50].

Human sleep occurs with a circadian periodicity, i.e. we sleep at night and wake during the day. Sleeping at the “wrong circadian time” such as traveling across time zones or shift work confuses our circadian rhythm [51].

When the sleep phase is shifted by sleeping too early or too late, REM sleep readjusts only after several days, while slow-wave sleep (SWS), which is less influenced by circadian factors readjusts immediately [52].

The central circadian clock/the circadian pacemaker is located in the suprachiasmatic nucleus (SCN) of the hypothalamus. Nerves in the SCN control the pineal gland, which synthesizes and releases melatonin [53].

Predictably, melatonin synthesis increases as light decreases and reaches its maximal level between 2:00 and 4:00 a.m. In the elderly, the pineal gland calcifies and less melatonin is produced, perhaps explaining why older people sleep fewer hours and are more often afflicted with insomnia [54].

Adenosine is a part of ATP (the energy molecule). The buildup of adenosine throughout the day creates sleepiness, and sufficient levels of adenosine are necessary for good sleep.

How Adenosine Makes Us Sleepy

ATP release from astrocytes contributes to the levels of adenosine between cells in the brain. The adenosine reduces synaptic transmission (communication between neurons), thus reduces brain function [56].

Mutant mice that cannot move adenosine into space between brain cells showed a reduced slow-wave sleep and a decrease in the recovery sleep following sleep deprivation [57].

There are 4 known adenosine receptors (A1R, A2aR, A2bR, and A3R), of which A1R and A2aR play a major role in sleep homeostasis (since both of them are expressed at high levels throughout the brain) [58, 59].

A2aR has been associated with inflammatory diseases and neurodegenerative disorders [60].

Further evidence for the role of adenosine in promoting sleep:

Uridine induces sleep through uridine receptors in the central nervous system. It binds to the P2Y receptors in areas of the brain which regulate natural sleep [68].

Uridine, when administered through a systematic route (such as in the stomach), may pass through the blood-brain barrier to balance sleep [69].

Glutathione is an important cellular antioxidant in its reduced form (GSH). The oxidized form of glutathione (GSSG) is a sleep inducer. In the mammalian brain, glutathione mainly exists in the form of GSH, which is easily converted to GSSG by a peroxidase enzyme [73, 74].

In rats, infusing the brain with a substance that induces oxidative stress (such as t-butyl hydroperoxide) at a low dose can trigger sleep in rats [76].

This data suggests that low levels of oxidation in the brain under the control of an antioxidant system may trigger sleep through the increase of GSSG and other substances in the POAH [77].

IL-1beta is a cytokine protein that, in humans, is made from the IL1B gene. It is one of 11 family members with respective receptors termed the interleukin-1 family (IL1F) [79, 80].

The sleep-promoting effect of IL-1beta was first demonstrated in rabbits, administration of IL-1beta enhanced NREM sleep, while an injection of an IL-1beta inhibitor reduced sleep [82, 83].

In humans, plasma IL1-beta peaks at the onset of slow-wave sleep, it enhances the firing rate of hypothalamic sleep-active neurons and inhibits wake-active neurons [86, 87].

TNF-alpha is a cytokine involved in systemic inflammation. Sleep-inducing effects of TNF-alpha were also first described in rabbits. Injection of TNF-alpha in the blood or in the brain enhances the duration and intensity of NREMS and decreases REMS [88, 89].

Brain iNOS (inducible Nitric Oxide synthase) has a circadian variation and increases with sleep propensity. In rats, iNOS is increased during sleep deprivation. NREM and REM sleep were enhanced after administration of NO precursors, such as L-arginine. TNF-alpha mediates many of its actions via iNOS [95, 96].

The figure below shows the various cytokines and their mechanisms as part of a sleep biochemical regulatory network.

BDNF (Brain-Derived Neurotrophic Factor) is important for the nerve cells to grow. In addition, depressed people have low levels of BDNF, and sleep disturbances are very common among these people [100].

BDNF appears to have a circadian rhythm, being high during the day and lower at night [101].

BDNF production during the day correlates with the amount of slow-wave (deep) sleep during the subsequent night, suggesting that BDNF is a measure of sleep pressure (the body’s desire to sleep) [102].

The T allele of the BDNF SNP called rs6265 correlates with lower BDNF levels and may thus impact sleep quality. In addition, this allele may be associated with cognitive decline [103].