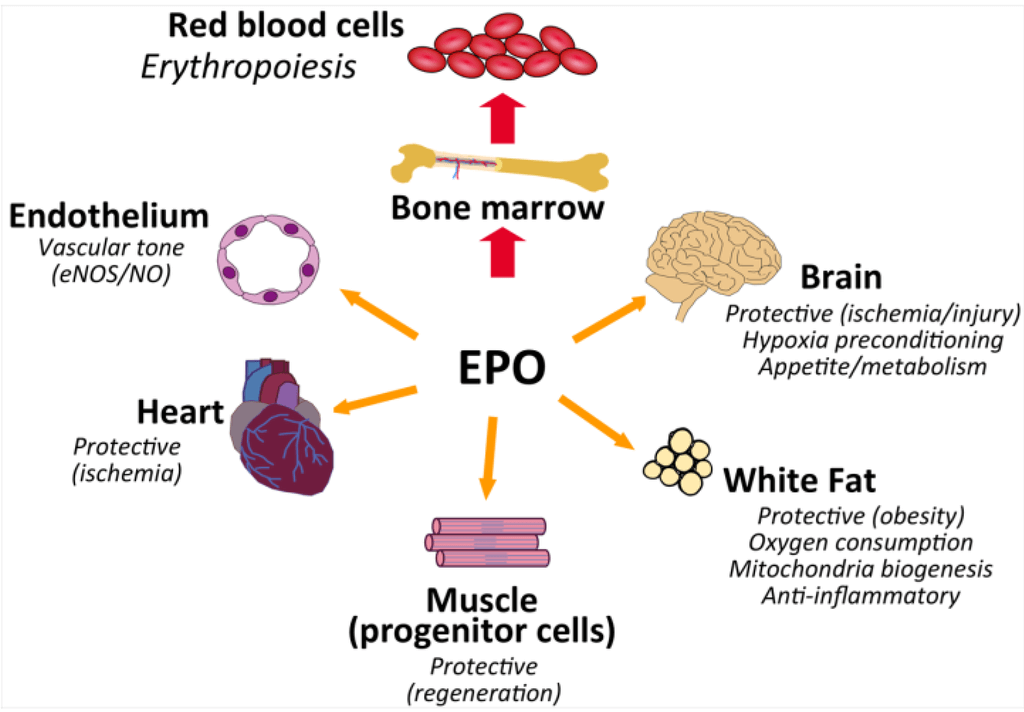 Erythropoietin (EPO) is a hormone that stimulates the production of new red blood cells. Drug forms of EPO are used in anemia to reduce the need for blood infusions. EPO is also popular as a performance-enhancing substance and is banned in professional sports. Learn about all the uses and health risks of EPO.

Erythropoietin (also known as EPO, hematopoietin, or hemopoietin) is a hormone that stimulates the production of red blood cells, also called erythropoiesis. The primary role of red blood cells is to carry oxygen throughout the body [1].

The body naturally maintains a low level of EPO to ensure there is a constant level of red blood cells. When oxygen levels are low (hypoxia), the body will significantly increase the production of EPO, up to 1,000 fold [1].

Synthetic forms of EPO are available and are referred to as erythropoiesis-stimulating agents (ESA). These ESAs are FDA-approved for the treatment of several different types of anemia and also to reduce the need for blood transfusions during surgery [2].

In the United States, there are two kinds of ESA available:

These ESA medications work similar to the body’s own erythropoietin, they stimulate the production of new red blood cells [3].

However, ESA drugs also carry several significant safety warnings as they can increase the risk of blood clots and cancer growth, potentially leading to death [3].

EPO has a long history of misuse in competitive sports. In particular, endurance sports such as cycling and long-distance running have been the subject of a number of doping cases with ESAs [4].

In these sports, the misuse of ESAs can provide a competitive advantage by increasing the number of red blood cells in the blood, which can potentially improve oxygen delivery and endurance [4].

The use of EPO and ESAs in professional sports is prohibited by the World Anti-Doping Agency [5].

Below we’ll discuss the FDA-approved uses of ESA medications.

ESAs should always be taken under the direction of a doctor. The improper use of ESAs can increase the risk of heart attacks, strokes, cancer, and even death.

Anemia is a condition where the blood doesn’t contain enough healthy red blood cells, which can leave those with anemia feeling tired and weak. There are many possible causes of anemia, such as blood loss, iron deficiency, and malaria, to name a few [6].

ESAs are FDA-approved for the treatment of several different types of anemia, including anemia caused by [2]:

In these types of anemia, regular blood transfusions are sometimes necessary to maintain a proper level of red blood cells.

A number of large clinical trials have demonstrated that ESAs can increase hemoglobin levels in these types of anemia and decrease the need for blood transfusions. According to some research, more than 95% of patients no longer require transfusions after 3 months of treatment with ESAs [2, 7].

However, the negative effects of ESA can severely limit its use for anemias. We’ll detail these limitations further on.

ESAs can be used for certain types of surgery to reduce the need for red blood cell transfusions. More specifically, ESAs are only appropriate for patients who are at a high risk for blood loss and are undergoing elective, noncardiac, nonvascular surgery [2].

According to multiple clinical trials, ESAs can decrease the need for blood transfusions for this type of surgery [2, 8].

The following purported benefits of ESAs are only supported by limited, low-quality clinical studies. There is insufficient evidence to support the use of ESAs for any of the uses listed below. This medication should always be taken under the guidance of a doctor.

There is some evidence that ESAs may have protective effects in the brain, especially in newborns.

For example, a study of 200 low birth weight infants found that ESAs may protect the brain against injury from intraventricular hemorrhage, a type of bleeding in the brain. In the study, infants who received ESAs went to perform better on intelligence tests as children compared to those who did not receive treatment [9].

Another prospective case-control study of 45 newborns found that ESAs may also protect against hypoxic-ischemic encephalopathy, a type of brain injury caused by oxygen deprivation. The study found that infants who received ESAs had fewer neurologic and developmental disabilities [10].

Oral mucositis is a condition characterized by painful swelling and ulcers in the mouth. A randomized placebo-controlled trial of 80 patients with oral mucositis caused by chemotherapy found that an EPO mouthwash may reduce the duration and incidence of this condition [11].

According to a different study of 12 patients who had a gingival graft, an EPO topical gel may reduce inflammation and speed up healing time after a gingival graft procedure [12].

No clinical evidence supports the use of ESAs for any of the conditions listed in this section. Below is a summary of the existing animal-based research, which should guide further investigational efforts. However, the studies listed below should not be interpreted as supportive of any health benefit.

According to a goat study, ESA treatment may increase bone formation and angiogenesis, the formation of new blood vessels [14].

Clinical research shows that the use of ESAs can pose a significant health risk in certain individuals. This is not a comprehensive list of risks and the use of ESAs depends on a number of factors. A doctor will have to weigh the benefits and risks to determine if ESA treatment is appropriate.

For those with chronic kidney disease, ESAs can increase the risk of stroke, heart attack, and death when hemoglobin levels are greater than 11 g/dL [2].

Blood levels of hemoglobin should be monitored to ensure hemoglobin levels do not become too high [2].

There is evidence that ESAs can increase the risk of tumor progression or recurrence in patients with breast, lung, head and neck, lymphoid, and cervical cancers. ESAs have been shown to shorten overall survival in these types of cancer as well [2].

ESAs can increase the risk of deep venous thrombosis (DVT), a type of blood clot that typically occurs in the leg or thigh. Those taking ESAs and undergoing surgery should receive proper treatment to reduce the risk of DVTs [2].