Fleas can infest pets and home environments. Flea bites can cause skin irritation and may, in rare cases, transfer infections to humans. Pet owners spend more than $15 billion (US) annually to protect their pets from fleas. Read more to learn about the causes of flea bites, signs & symptoms, risk factors, prevention, and treatment options.

What Are Flea Bites? 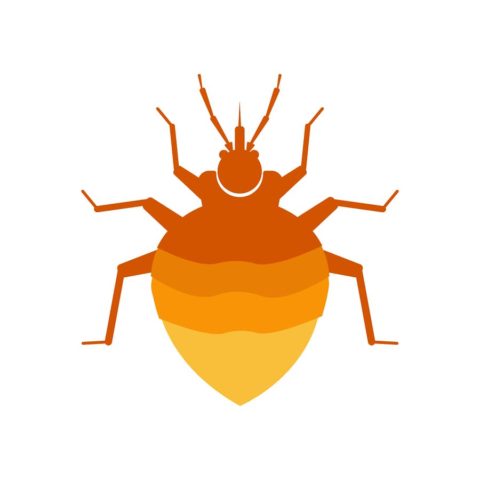 Flea bites cause lesions on the skin. These insects may bite numerous times while exploring the skin surface, resulting in clusters of bites on the skin. The flea bite appears as a raised, reddened region on the skin approximately 5 to 30 minutes after the bite. Flea bites harden 12 to 24 hours after a bite and can persist for a week or more [1].

Most fleas do not come into contact with humans or pets and have little or no medical relevance. 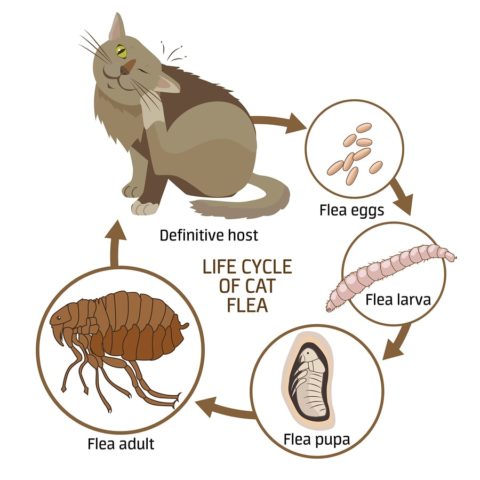 Eggs take 1 to 10 days to hatch, depending on humidity and temperature [1].

Larvae have biting mouthparts but lack eyes and legs. They often live deep in carpet or bedding of homes with flea infestations [1].

Pupae live in cocoons that have an oval shape and white coloration. Pupae can remain dormant for several weeks and up to a year until a host arrives [1].

Fleas usually reach their peak potential to attack humans and pets in late summer (August through September). Temperature and humidity during late summer allow flea populations to increase in comparison to other times of the year [3].

Fleas can bite and infest any body part they come in contact with. Fleas feed on the blood vessels of humans and animals, which allows for easy entry of pathogens. Hence, flea bites may give rise to symptoms of the disease as well [5].

Flea infestations of pets and homes may cause flea bites. Fleas usually extend 2 to 10 mm in length and can jump up to 150 times their body length. Their hind legs (largely composed of the protein resilin) allow fleas this jumping ability [1].

Research indicates that cat fleas infest pets and homes most frequently. In Columbia, cat fleas made up 94.2% of fleas taken from cats and dogs. Cat fleas usually cause health problems in both pets and humans, unlike some other flea species [6, 7].

The majority of flea species infest rodents. If rodents have nests in a home, pets can pick up fleas if they come into contact with rodents or their nests. It is important to limit or eliminate rodent infestations in homes with pets [1].

Temperature and humidity are crucial determinants of flea development. Warmer temperatures lead to the expansion of flea populations in the northern hemisphere [1].

Human encroachment on wild habitat may also increase the number of illness-causing flea bites. In fact, the re-emergence of diseases from fleas may become an epidemic due to human encroachment and climate change [1].

Evidence for this comes from the discovery of:

Flea bites in humans usually resolve by themselves and rarely cause complications. That said, if you notice any signs of infection – such as severe rash, swelling, or white pocket – make sure to see your doctor.

Tungiasis comes from the bite of a sand flea or jigger. A female penetrates the skin, which becomes irritated and painful within 24 hours. Scratching of the irritated area spreads eggs and may lead to bacterial infection [1].

Scientists first detected flea-borne spotted fever in cat fleas. Many other species of fleas have also been shown to transmit the disease. Although rare, the disease occurs worldwide [1].

The main symptoms include rash, headache, and fever. Symptoms may also include black crusted skin lesions, vomiting, and diarrhea [1].

Murine typhus gets transferred from a rodent to a flea, often oriental rat fleas. The fleas can then pass the disease to humans through bites [1].

The cat flea may transmit Bartonella henselae through scratches or bites. The disease is present worldwide [1].

Most cases resolve without treatment after 2 to 4 months. Twenty-five percent of patients with heart valve complications die from the disease [1].

Cat fleas and human fleas transmit Bartonella Quintana to humans through bites. A recent re-emergence of the disease has occurred in Europe and the USA, especially among homeless people. No deaths have been reported so far [1]. 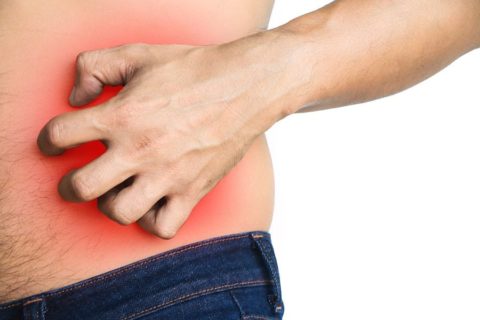 Identifying which insect may cause papular urticaria remains difficult. Researchers have suspected that fleas and/or mosquitos cause the disease [8].

Most often, bites from cat fleas cause flea allergic dermatitis. When fleas pierce the skin with highly specialized mouthparts, some people have allergic reactions to flea saliva. This leads to dermatitis [3].

Cat fleas can get infected with tapeworm. When a dog or cat eats an infected flea, they get tapeworm. Although rare, pets may transmit tapeworm to humans. Infection rarely causes disease in dogs and cats. Animals with tapeworm should get treated to prevent the risk of human infection [10, 11, 12]. 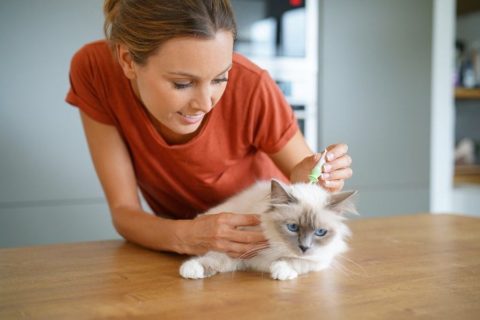 Before applying any flea treatment to your pet, make sure to consult your vet first. One substance may be safe in one species but dangerous in another, and adequate doses may vary. 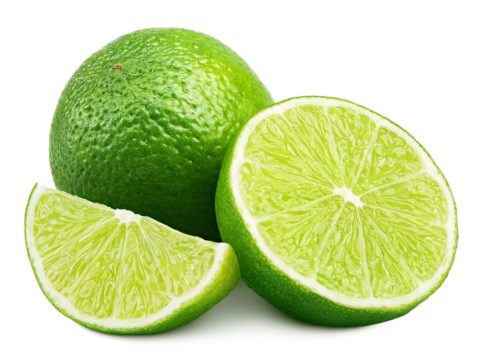 Examples of possibly useful insecticides include:

Resistance occurs when fleas become less sensitive to insecticides. Cross-resistance can happen when resistance to one insecticide gives resistance to another insecticide. Recent reports show that cat fleas and human fleas have resistance for carbamates, organophosphates, pyrethroids, and pyrethrins [6].

There is less flea resistance to organochlorines, imidacloprid, lufenuron, and fipronil. Some studies suggest resistance to fipronil. Usually, cat fleas get tested with these products for studies. Different degrees of resistance may exist in other species [6, 21, 7]. 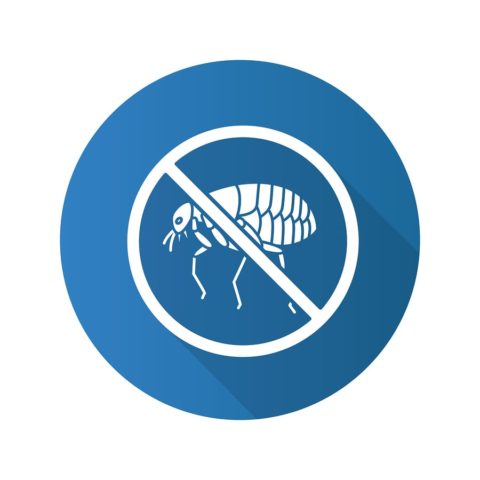 For humans, washing the area with soap and water will reduce the spread of infection. Application of an ice pack to a bitten region for 10 minutes reduces swelling from a flea bite. A bitten individual should avoid scratching the irritated area to avoid a risk of infection [25].

Topical anti-itching creams and lotions may also be used [4].

If you notice any signs of infection or other complications – such as severe rash, swelling, or white pocket – make sure to see your doctor. Do not apply any treatment on your own.

Topical ivermectin or metrifonate were effective at eliminating fleas on the seventh day of application in infected humans. These drugs do not kill the fleas in the early stages of skin penetration [1].

Other agents kill skin-embedded fleas after early phases of penetration. These agents include:

Before applying any flea treatment to your pet, make sure to consult your vet first. One substance may be safe in one species but dangerous in another, and adequate doses may vary.

What is Colostrum? Definition + Side Effects & Dosage