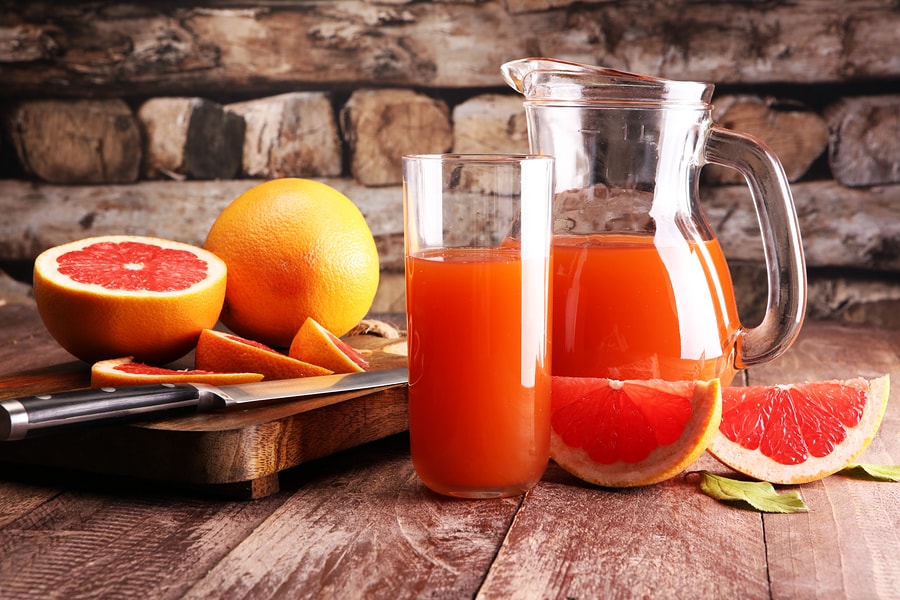 Grapefruit is a citrus hybrid known for its bitter taste. It originated as a cross between sweet orange and pomelo, probably sometime in the 17th century.

Grapefruit is used in traditional (folk), Chinese, holistic, herbal, nutritional, and Ayurvedic medicine. You can take it as whole fruit, juice, seed extract, or essential oil.

It provides a wide range of health benefits, due to the antioxidant and detoxifying properties of its many flavonoid compounds (naringenin, narirutin, naringin, hesperidin, neohesperidin, didymin, and poncirin) [1, 2].

Grapefruit has been traditionally used for a variety of health issues, including candida, cold, diabetes, high cholesterol, infection, insomnia, nervousness, and rheumatism [3]. Read on to find out which of these benefits are supported by science.

The biologically active components of grapefruit include:

These components are unique to grapefruit and likely related to the effects of grapefruit, unlike quercetin or apigenin, which are flavonoids present in many plants, including grapefruit [3].

Flavonoids have antioxidant properties. Antioxidants are required to prevent the damage caused by ‘free radicals’ [4, 5].

Grapefruit chemicals vary in concentration according to species, but also to handling methods [6].

Blending rather than squeezing produces higher levels of some beneficial chemicals (such as naringenin, limonene, citric acid, and bergamottin), whilst juicing and hand squeezing results in higher levels of others (ascorbic acid and dihydroxybergamottin, respectively) [6].

Other beneficial grapefruit components include [7, 3, 8]:

Grapefruit is also high in beneficial soluble fiber. It is low in both sodium and cholesterol, and very low in calories and saturated fat.

Grapefruit is possibly effective for weight loss, due to yet unknown mechanisms [9].

It is low in calories, so the substitution of higher-calorie foods may be one of the ways to improve weight loss.

According to the data collected from over 12.7k people in the National Health and Nutrition Examination Survey (NHANES) 2003–2008, consuming grapefruit regularly (grapefruit juice or fresh, canned, or frozen grapefruit) was associated with lower body weight, waist circumference, and body mass index (BMI). However, the effect was seen only among women [8].

A study (RCT) of 85 obese adults showed that consuming grapefruit (whole or juiced) before each meal, suppressed appetite by causing a feeling of fullness. This is termed ‘to preload’ (with low-calorie food) before meals [10].

An initial study in 20 people found that a citrus-based polyphenolic dietary supplement (SINETROL) containing grapefruit was effective for weight loss. However, it’s impossible to tell if the effect was due to grapefruit or other citruses [12].

A meta-analysis of 3 clinical trials with a total of 250 overweight and obese participants found that grapefruit didn’t have a significant effect on weight loss, but it did improve blood pressure [13].

Grapefruit diets are not based on proper science and can be considered to be ‘fad’ at present [15, 16].

One study of 91 obese people showed that after 12 weeks of supplementation, both grapefruit juice and fresh grapefruit improved insulin sensitivity [9].

In diabetic rats, grapefruit juice increased the activity of the enzyme glucokinase, which transformed glucose into glycogen in the liver and caused blood sugar levels to decrease [21].

Another possible mechanism for whole or pulped grapefruit reducing fasting blood sugar is due to its fiber content. Increasing consumption of dietary fiber can reduce fasting glucose [22].

Naringin, a grapefruit flavonoid, didn’t decrease blood sugar in rats but reduced the effects of ketoacidosis and oxidative stress. Thus, naringin supplements could alleviate the complications of diabetes [18, 9].

A meta-analysis of 3 trials with 250 participants found that grapefruit significantly decreased systolic blood pressure. However, there was a low number of clinical trials and short durations of studies, which limited the conclusions that could be drawn about the effects of grapefruit on the metabolism [15].

The polyphenol flavonoids present in grapefruit may increase nitric oxide (NO) in the blood. NO widens blood vessels reducing blood pressure [24, 1, 25].

Further clinical trials evaluating the effects of grapefruit are needed.

A study of 74 overweight adults showed that grapefruit lowered LDL-cholesterol, which, when high, increases the risk of heart disease [1].

A double-blind study of 27 people showed that grapefruit pectin decreased cholesterol levels in people at risk of heart disease [26].

In another study of 57 adults with high cholesterol, grapefruit lowered total and LDL-cholesterol and triglycerides, which are implicated in the hardening of the arteries. Red grapefruit proved to be more effective than white [27].

According to the data collected from over 12.7k people in the National Health and Nutrition Examination Survey (NHANES) 2003–2008, consuming grapefruit regularly (grapefruit juice or fresh, canned, or frozen grapefruit) was associated with higher good cholesterol (HDL). However, the effect was seen only among women [8].

A study of 85 obese adults showed an increase in good cholesterol (HDL) in groups taking grapefruit or grapefruit juice before meals. However, the difference was not statistically significant [10].

Larger, well-designed studies are needed to confirm the beneficial effect of grapefruit when it comes to heart disease.

However, larger studies are needed to confirm this.

There is evidence that vitamin C, beta-carotene, lycopene, and the flavonoids present in grapefruit all help boost the immune system [29].

Grapefruit can probably boost the immune system due to its high vitamin C content [30].

However, studies looking at the immune-boosting effect of grapefruit, in particular, are missing.

No clinical evidence supports the use of grapefruit for any of the conditions listed in this section. Below is a summary of the existing animal and cell-based research, which should guide further investigational efforts. However, the studies listed below should not be interpreted as supportive of any health benefit.

Quercetin, found in grapefruit, had an anti-inflammatory effect in mice with allergic asthma [32].

Hesperidin, present in grapefruit, has antidepressant-like properties in mice. The mechanism involves nerve endings that release and are stimulated by serotonin (serotonergic) at the 5-HT1A receptors [33].

Grapefruit compounds are not toxic as such, only when taken in conjunction with any of a large number of popular medications (this is the so-called “grapefruit effect”) [36].

More than 50% of drugs that interact with grapefruit are used to treat heart conditions [23, 3, 37].

Side effects may include flushing (from the widening of veins), fast heart rate, or low blood pressure [23].

Grapefruit compounds can interact with a variety of medication, making some less and others more effective. If you’re taking any drugs, discuss your grapefruit consumption with your doctor.

Read more about the effect grapefruit has on medication here.

Two 25-year prospective studies of large groups of adults showed that citrus consumption may be associated with an increased risk of malignant melanoma (skin cancer). Citrus products are high in psoralen, which absorbs ultraviolet light. Animal studies and long-term use of the drugs in people have shown it may increase the risk of melanoma [38].

An observational study in 50k postmenopausal women found that grapefruit intake was associated with an increased risk of breast cancer for those who consumed one-quarter grapefruit or more per day, likely due to grapefruit increasing estrogen [39].