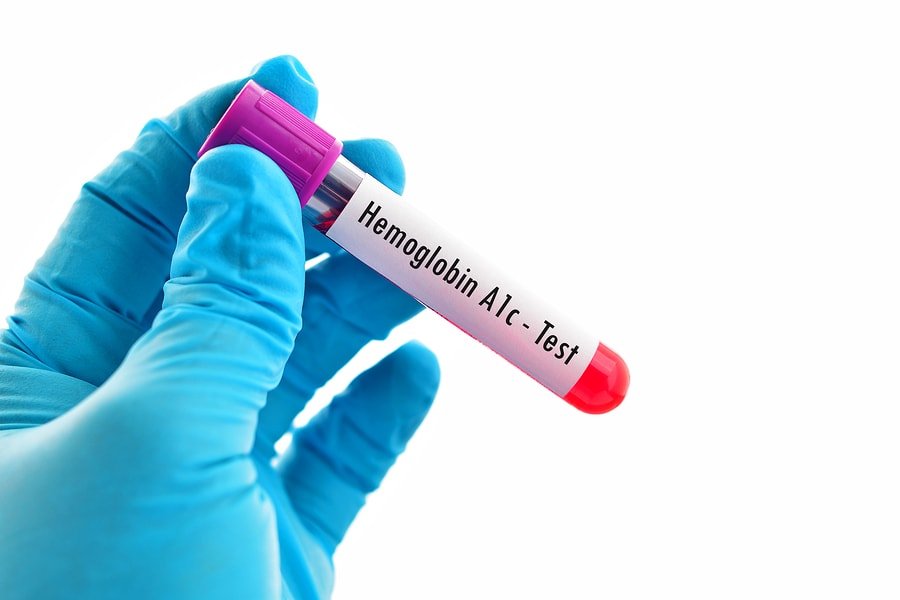 HbA1c is an indicator of your long-term glucose levels. This lab test is used to aid in the diagnosis of diabetes and prediabetes. In general, the lower the HbA1C within the normal range, the better. As the number climbs, it increases the risk of diabetes and chronic disease. Read on to find out why you should regularly check your values and whether they are in the normal range.

Glycated hemoglobin (HbA1c) is an important indicator of long-term glucose levels and has been recommended for use in the diagnosis of diabetes mellitus (DM) by the American Diabetes Association (ADA) and World Health Organization (WHO) [1].

HbA1c is created when glucose binds to hemoglobin, which is found in red blood cells [2].

HbA1c is sugar bound to hemoglobin in red blood cells. It can help diagnose diabetes.

Red blood cells (RBCs) are exposed to glucose in the blood. The higher the blood glucose level gets the more HbA1c forms throughout the lifespan of a red blood cell [3].

The lifespan of a red blood cell varies from person to person but averages out to approximately 117 days in men and 106 days in women. Therefore, the HbA1c is an index of average blood sugar levels over the preceding 2 to 3 months. Of this 2 – 3 month period, the immediately preceding 30 days contribute 50% to HbA1c [3].

However, HbA1c does not always correlate with blood glucose levels. It is possible to have high blood glucose but low HbA1c due to the presence of hemoglobin variants, inflammation, or other factors that increase red blood cell turn over.

If your red blood cells live longer than 90 days or they are smaller (as measured by MCV in a blood test), then your HbA1C will be artificially higher.

A healthcare professional will take a blood sample from your arm, which will be sent to the lab to measure your HbA1c levels. Finger prick tests can use a single drop of blood to get a reading, which is often more convenient for children or people who have difficulty giving larger blood samples.

Your doctor will usually order this test as part of a routine health checkup or if you are at risk of diabetes. If you have diabetes, they will order the test to monitor your health status or your response to medication [5].

In most cases, you don’t need to prepare for the test in any particular way or fast, unless you are also testing your fasting blood glucose at the same time. Check with your health care provider to be sure.

The HbA1c test requires a blood sample, either drawn from your arm or taken with a finger prick.

How Often Should You Test HbA1c?

According to the American Diabetes Association, screening for diabetes is recommended in people over 45 (every 3 years), or at any age if you have certain risk factors, including [6]:

Your doctor may suggest quarterly monitoring (every 3 months) if you have newly diagnosed or pregnancy-associated diabetes, rapidly changing HbA1c levels, changes in treatment or insulin dose, or if you have a history of hypoglycemia (low blood sugar) [8].

Testing HbA1c five or more times per year is redundant because HbA1c is a measure of average blood sugar over three months [8].

Diabetics with stable blood sugar usually test twice a year, while newly-diagnosed patients or pregnant women with diabetes may need to repeat the test every 3 months.

Advantages of HbA1C Over Other Blood Glucose Tests

However, some health conditions that affect red blood cells and hemoglobin (e.g. anemia) can falsely increase or decrease HbA1c levels [10].

The HbA1c test is simple, quick, can be taken at any time, and doesn’t require you to fast. Its readings are unaffected by previous exercise, stress, or short-term hormonal fluctuations. However, conditions that affect red blood cells and hemoglobin can make it inaccurate

HbA1c is usually measured in percent or mmol/mol (mili-mols per mol).

Measuring HbA1c percentages are considered to be the “old way” and most labs nowadays report its values as mmol/mol.

If you need to convert between the two, the Australian Diabetes Society recommends the following formula [11]:

Most labs now report HbA1c in mmol/mol, while percentages are considered to be outdated. However, you can easily convert between the two.

Integrative medicine doctors often tighten those parameters to as low as 5.2% (33 mmol/mol) as prevention measures, though this is not part of international guidelines and isn’t supported by research.

However, HbA1c as a single measurement may not be adequate to diagnose diabetes [14].

Your doctor will interpret this test, taking into account your medical history and other test results.

HbA1c levels were reported to be higher in colder (January-March) than in warmer (July-September) months in a study of over 600 diabetics [15].

This variation amounts to about 0.3% (3.3 mmol/mol). These differences may be due to differences in exercise, carbohydrate intake, and the number of illness events between summer and winter months [16].

HbA1c levels are often reported to be different depending on race, ethnicity, and ancestry.

African-Caribbean and South Asian subjects were reported to have HbA1c levels 0.27 – 0.4% higher compared to those with European ancestry, despite lower fasting blood glucose in oral glucose tolerance tests [9, 17].

In South Africa, Black African patients with diabetes were more likely to reach the HbA1c target (<7%) and less likely to have eye, kidney, or heart disease complications [18].

People of African-Caribbean and South Asian ancestry may have mildly higher HbA1c levels than people of European ancestry.

HbA1c results can be inaccurate in persons with elevated amounts of hemoglobin variants. These variants (Hemoglobin S, C, E, and F) are more prevalent in non-whites [19].

Hemoglobin S (the cause of sickle cell anemia) is found in approximately one in 12 African Americans, one in 100 Hispanics and other races [19].

Hemoglobin C is found in approximately one in 50 African Americans [19].

Hemoglobin E (a cause of beta thalassemia) is associated with Asian descents, particularly southeast coastal Asia, with up to 30% in some areas [19].

Hemoglobin F is the normal hemoglobin typically found in a fetus and in low concentration in adults. In some genetic diseases like Hereditary Persistence of Fetal Hemoglobin, Sickle Beta Thalassemia, and some other diseases, hemoglobin F can be elevated [19].

Men have to undergo greater metabolic disturbances and put on more fat to develop HbA1c-defined diabetes than do women [20].

One study argues against the increase of HbA1c with age though [24].

Older people can have higher levels even if they are healthy.

HbA1c decreases after donating blood. Therefore, HbA1c levels are likely to be underestimated after blood donation in patients with diabetes [25].

This is as a result of lower hemoglobin after giving blood and doesn’t mean that your blood sugar levels are lower.

People with diabetes who recently gave blood may get misleadingly low HbA1c readings despite having high blood sugar levels.

In other studies, HbA1c>5.9% (41 mmol/mol) was associated with an increased risk of large infants, cesarean section, and high blood pressure (preeclampsia) [28, 29].

HbA1c levels should stay close to the normal range during a healthy pregnancy. High HbA1c levels in pregnancy may cause diabetes and health problems in both the mother and baby.

A study suggests that women with type 1 diabetes who have extra weight before pregnancy and after childbirth are more likely to have high HbA1c levels.

HbA1c is a measure of your average blood glucose levels over the past 3 months. Doctors usually order the HbA1c test to check for or monitor prediabetes or diabetes. Because blood sugar and insulin fluctuations are directly associated with most chronic disease, HbA1C is one of the most useful tests for preventative health as well. Healthy people should keep their levels in the normal range, which is 4-5.6 % (20 – 38 mmol/mol). Slightly higher levels point to prediabetes, while high levels (above 6.5% or 48 mmol/mol) indicate diabetes. However, your doctor will make a diagnosis taking into account your medical history, symptoms, and other test results. HbA1c may slightly vary depending on the season (higher in warm months), a person’s ethnicity, gender, concurrent diagnoses, and genetic makeup. Levels should remain close to normal in a healthy pregnancy.

Read our other posts to learn about:

All About Glucose, Diabetes, & Health Effects of High/Low Levels