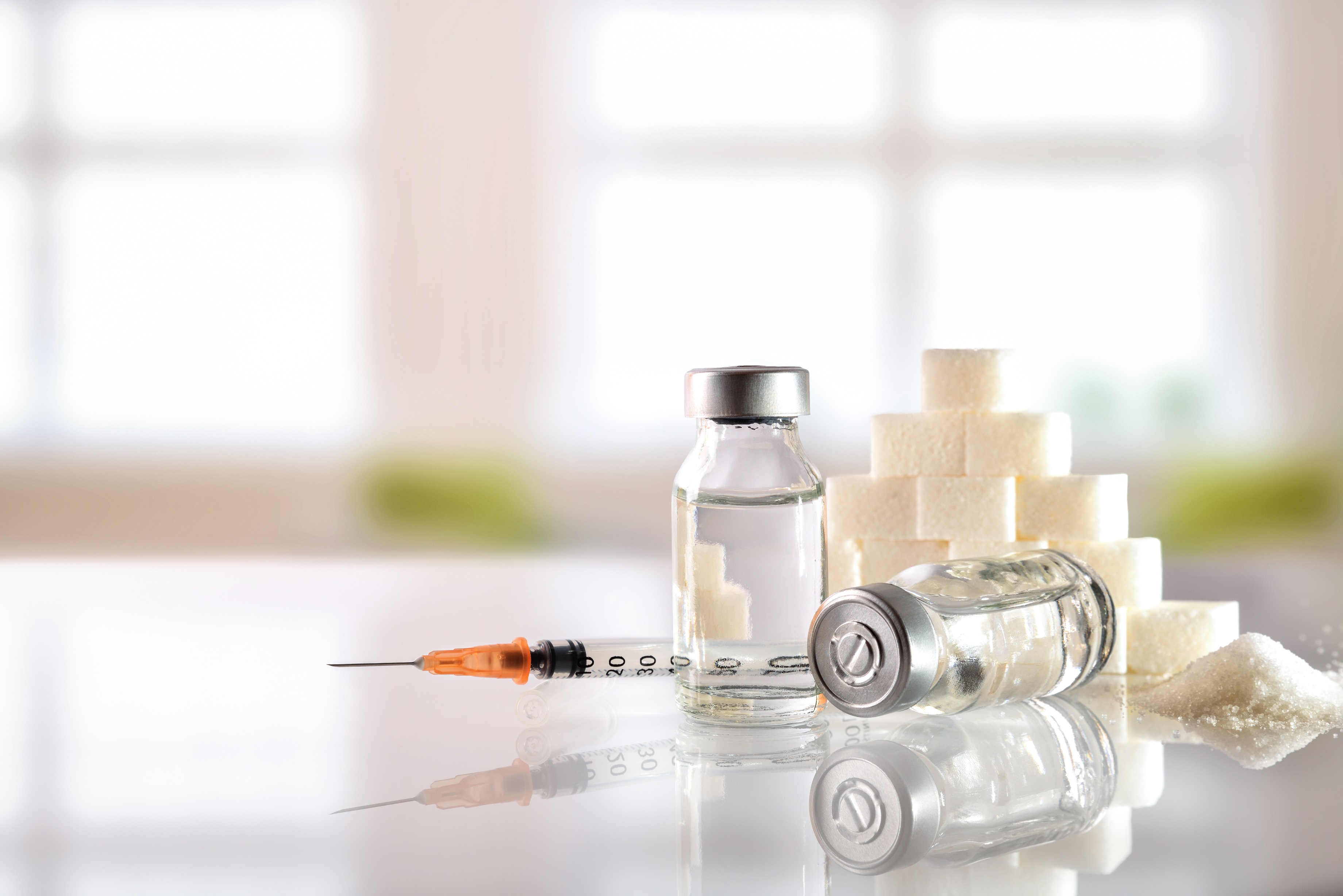 Insulin is a hormone secreted by the pancreas. Insulin is responsible for lowering blood glucose and storing this sugar into bodily tissues such as in muscles and the liver [1, 2].

Insulin can be fattening. It increases fat synthesis and inhibits the breakdown of fat tissue. In addition, it promotes glucose uptake and its use to produce energy in the cells [3].

Insulin also plays a role in suppressing glycogen conversion into glucose, which is released into the bloodstream, in the liver and muscles [3].

Injectable insulin is approved to lower blood glucose in people with type 1 diabetes (who produce little or no insulin), as well as in those with type 2 diabetes (who fail to produce or use insulin normally) that cannot be controlled with oral medications. It is injected under the skin of the abdomen, legs, back of arms, or buttocks 30 minutes before a meal.

Multiple studies attest to its effectiveness [4, 5, 6].

Insulin can enter the brain through the blood-brain barrier and exert its effects via brain insulin receptors [7].

A hormone similar to insulin (IGF-1) is associated with cognitive function in elderly people and seems to mediate the beneficial effects of exercise on the brain [14, 15].

In test tubes, both insulin and the similar proteins insulin-like growth factor 1 (IGF1) and 2 (IGF2) stimulated the growth of brain and nerve cells. In rats, IGF2 promoted the regeneration of damaged motor nerves [17, 18, 19].

Taken together, the evidence suggests that insulin may improve brain function, especially in people with Alzheimer’s or mild cognitive impairment. Because it’s not approved by the FDA, you may only use it as an add-on if your doctor recommends it.

Insulin resistance is associated with an increased incidence of high blood pressure and coronary heart disease [20, 21].

Insulin increased the production and secretion of a growth factor known to create new blood vessels (VEGF) in a cell-based study [35].

This hormone also inhibited platelet formation via an increase of a specific compound (cGMP), possibly reducing the risk of blood clots [36].

Although a bit limited, the evidence suggests that insulin may help improve pumping function and blood flow. You may discuss with your doctor if it may help you prevent or improve heart condition. Importantly, never use insulin in place of what your doctor recommends or prescribes.

A meta-analysis found that insulin increases amino acid uptake and thus protein synthesis in the muscles, and decreases muscle protein breakdown, which is why bodybuilders like to spike insulin with glucose. However, another meta-analysis found that its administration could only promote muscle building at very high levels but was ineffective at normal doses in healthy young people [37, 38].

Insulin-mediated glycogen production in the muscles is the main pathway of glucose utilization in both diabetics and healthy people, but diabetics are less effective at utilizing glucose due to insulin resistance [39].

All in all, the evidence is contradictory and doesn’t allow us to draw conclusions. More clinical trials are needed to shed some light on the potential of insulin to increase muscle building.

In an old trial, insulin administration increased the secretion of stomach acids. This effect couldn’t be replicated in another trial on 9 healthy people, but insulin improved the secretion of the digestive enzyme pepsin [41, 42].

Two old, small clinical trials are clearly insufficient to support this potential benefit. Larger, more robust studies are needed to shed some light on this aspect of insulin.

No clinical evidence supports the use of insulin for any of the conditions listed in this section. Below is a summary of the existing animal and cell-based research, which should guide further investigational efforts. However, the studies should not be interpreted as supportive of any health benefit.

The conditions we discuss here are commonly associated with high insulin levels. Note, however, that the majority of studies covered in this section deal with associations only, which means that a cause-and-effect relationship hasn’t been established. Because obesity and cancer are complex conditions, other genetic and environmental factors also contribute to their development.

Insulin has mixed effects with regard to weight – it reduces appetite, but can increase fat mass. Insulin is one of the big 4 hormones that determine weight. It forces fat cells to take up blood lipids, converts them to triglycerides, and promotes fat storage in fat cells [44].

In a study of 22 healthy men, elevated insulin levels were associated with greater amounts of fat around the organs (visceral fat) [45].

In a small trial on 7 healthy men, insulin infusion decreased blood triglycerides by 22%, APOB by 32%, and free fatty acids by 85%, meaning it promoted their transport to fat cells [46].

Fat tissue has been shown to release hormones (adipokines) that may play a role in causing insulin resistance [47].

In cell-based studies, insulin stimulates the creation of fat tissue through the utilization of glucose [48].

High fasting glucose and insulin levels, as well as the presence of insulin resistance, were associated with an increased risk of pancreatic cancer in a study on over 29,000 Finish men [49].

Similarly, insulin resistance and high fasting insulin were associated with thyroid and endometrial cancer in 2 meta-analyses [50, 51].

High blood insulin levels have also been associated with an increased incidence of colon cancer in multiple studies [52, 53].

Insulin therapy has been associated with an increased risk of cancer, especially colorectal, pancreatic, and liver cancer, in diabetics [54, 55]

Insulin increases the levels of a related hormone (IGF-1). A study on over 400 people associated high levels of this hormone with lung cancer. In contrast, its levels are lower in women with ovarian cancer [56, 57].

Foods with high glycemic index cause a faster and greater insulin (and glucose) spike after their digestion. For instance, fruit juice has a much greater glycemic index than fruits due to the removal of the fiber [58].

In a study on over 13,000 non-diabetic men and women, high alcohol intake was associated with low fasting insulin levels [59].

Hormones
0
What is SHBG? + Symptoms of Low Levels & How to Raise
Natural Substances
5
24
Is Myo-inositol Good for PCOS, Anxiety & Weight Loss?
Blood Tests
0
How to Lower Triglycerides Naturally & Foods to Avoid