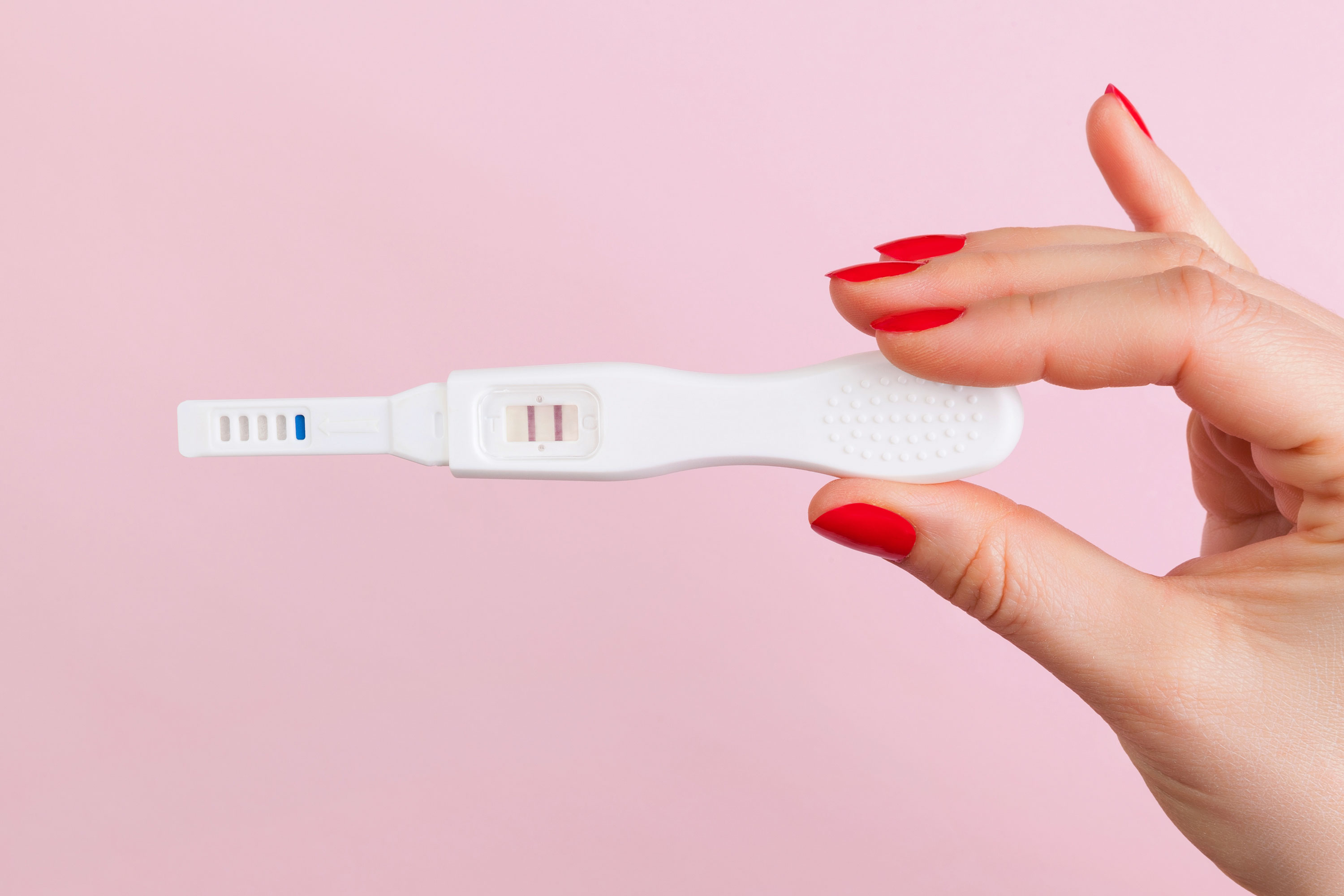 Human chorionic gonadotropin (hCG) is a small hormone with big implications. If your levels are high enough, you’re probably pregnant. Find out how hCG and pregnancy tests work, how long you should wait to take a home pregnancy test, and what levels are considered normal in pregnancy.

What Is hCG (Human Chorionic Gonadotropin)?

Human chorionic gonadotropin (hCG) is a hormone best known for starting a pregnancy. The placenta starts releasing hCG after a fertilized egg attaches to the wall of the uterus, a process called implantation [1].

The main function of hCG is to support the development of a newly fertilized egg. Over 3-4 weeks after implantation, hCG increases the release of progesterone, another “pregnancy” hormone [2].

Progesterone helps grow blood vessels in the uterus, which provides a blood supply and nourishment to the growing fetus while the placenta is being formed [2].

This makes hCG useful as an indicator of pregnancy. Most pregnancy tests will check for the presence of hCG either in the urine or blood [1].

Testing hCG levels can also help detect certain kinds of cancer, including ovarian cancer in women and testicular cancer in men. To learn more about how hCG can be used to detect cancer, read this post [2].

Aside from increasing progesterone, hCG also stimulates the growth of the placenta, which is fully formed by the 8th week of pregnancy. hCG levels peak at 10 weeks of pregnancy, which is about 8 weeks after conception (since pregnancy count starts from the first day of the last period) [2].

It also promotes the development of the baby’s organs and helps grow the umbilical cord. Plus, hCG stimulates stem cell growth, stops the mother’s immune system from attacking the fetus, and prevents uterus contractions during pregnancy [2, 1].

On the downside, hCG can reach the brain where it may trigger the intense nausea many women experience in the first months of pregnancy [2].

hCG is produced during early pregnancy. Its main function is to support the development of the embryo in the uterus.

Certain fertility treatments use a combination of hCG, luteinizing hormone (LH), and follicle-stimulating hormone (FSH) to induce ovulation and improve the chances of a successful pregnancy [3].

There’s some evidence that hCG can also improve sperm count in men with testosterone-related infertility [4, 5].

Sulfated hCG (also known as pituitary hCG) is released in small amounts right before ovulation in women. The exact function of this type of hCG is not fully understood, but researchers believe it mimics LH, an important hormone of the menstrual cycle that promotes ovulation [2, 1].

The cells in the body naturally go through a process called apoptosis, whereby the body intentionally kills off certain cells to maintain good health. Some forms of hCG (hyperglycosylated hCG and the free β-subunit types) can block apoptosis, leading to rapid cellular growth [2, 1].

Blocking apoptosis serves an important function in pregnant women: it promotes the development and growth of the embryo and placenta. In fact, insufficient levels of hyperglycosylated hCG can increase the risk of pregnancy failures [2, 1].

However, high hCG levels outside of pregnancy can lead to tumors and increase the risk of cancer, especially cancers that affect the uterus, placenta, and testicles. On top of that, some cancer cells themselves can release β-hCG, which can further accelerate cancer growth [2, 1].

High hCG promotes rapid cellular growth, which serves to grow the fetus in pregnancy but may lead to cancer in other cases.

Unless you’re wondering whether you’re pregnant, you are unlikely to check your hCG levels. All the different types of pregnancy tests that are available work by measuring hCG [6, 7].

The pregnancy test that most people are familiar with is the store-bought urine sample type. These home pregnancy tests usually give a simple yes or no result, depending on if the detected amount of hCG is above a certain threshold [6, 7].

The first line you see on the test is a “control line:” it will always show up, as long as the strips are working as they should. The second line is the hCG one: it’ll only come up if your hCG levels are high enough to indicate pregnancy.

There are other, more sensitive urine tests that are normally used in clinics or hospitals. These types of urine tests can detect lower amounts of hCG and report the actual hCG level [8].

Pregnancy tests that use blood samples are typically more sensitive and accurate compared to urine tests. Blood tests can detect very low levels of hCG and are usually used by doctors to help confirm a pregnancy [8].

How Accurate Are Pregnancy Tests?

Pregnancy tests, even ones you buy at the store, are generally very accurate when performed correctly. According to some studies, most brands of home pregnancy tests are accurate over 95% of the time under lab conditions [6, 7].

In the real world, however, mistakes can happen and tests aren’t always performed correctly. The accuracy of some home pregnancy tests can drop to below 75% when factoring in real-world errors, such as [6, 7, 9, 10, 11, 12]:

Pregnancy tests are generally inexpensive and most manufacturers recommend taking them twice to overcome some of these factors. Consult it with your doctor if you repeatedly get negative results but your period doesn’t arrive in a few days.

Timing is a big factor. You have to ovulate for conception to occur, which is when sperm fertilizes the released egg. It takes about 6-10 days for the fertilized egg to be implanted in the uterus, which is when hCG levels start to rise and continue to double every 24 hours over the next 5 weeks [13].

However, sperm can survive for up to one week in a woman’s body. This one week period is called the fertile window, and it closes on the day of your ovulation [14].

That means it may take 2-3 weeks after intercourse before your hCG levels begin to rise if you’re pregnant. For example, you may have ovulated a week after you had intercourse.

Still, your chances of getting pregnant are much lower if you had intercourse 7 days before ovulation compared to a day before [15].

According to some estimates, the average fertile window falls in the 6 days leading to ovulation. Your chance of pregnancy is greatest if you have intercourse on the day of ovulation itself (about 33%) [16, 17, 15].

Talk to your doctor if you are trying to conceive and carefully follow their recommendations to maximize your chances.

Your chance of pregnancy is higher if you had unprotected sex during the 5-6 days leading up to ovulation, which marks your fertile window.

How Long Should You Wait To Take the Test?

Some pregnancy tests guarantee greater sensitivity (such as First Response). You can take them about 8-10 days after implementation, which usually falls 4-6 days before your period (if your cycles are regular) [10].

However, most experts recommend waiting 3-4 days after you missed your period to get accurate results. If you test too early, your levels may not be high enough to give a positive result – i.e. you’ll get a “false negative,” which is quite common [10].

False positive results, on the other hand, are extremely unlikely. You may be anxious to find out if you’re pregnant or not, but waiting it out will actually save you money and stress from buying a bunch of tests and getting potentially inaccurate results [10].

If you test around the time of your expected period and get a negative result, you are less than 2% likely to be pregnant. If you wait 7 days after you missed your period and test negative, you are almost certainly not pregnant. Yet, you should consult a doctor if your period takes too long to arrive to determine what underlying condition may be causing your missed period [10].

Make sure to carefully follow the instructions that come with the home pregnancy test kit to ensure accurate results.

It’s best to wait a few days after you’ve missed your period to take a pregnancy test to get accurate results.

During the early stages of pregnancy, hCG levels increase exponentially and peak near the end of the first trimester. After that, hCG levels steadily decline until reaching a plateau throughout the second and third trimesters, returning to pre-pregnancy levels shortly after birth [18].

hCG blood levels are normally reported in mIU/mL (milli-international units per milliliter). According to the American Pregnancy Association, normal hCG blood levels in early pregnancy are [19]:

Home pregnancy tests will report a positive result if hCG levels are above a certain threshold. This hCG threshold varies depending on the brand of the test but is usually between 10 to 100 mIU/mL [7, 6].

For blood tests performed by a doctor, hCG levels above 25 mIU/mL are generally considered positive for a pregnancy [19].

Home pregnancy tests will report a positive result if hCG levels surpass a certain threshold, which is usually 10 to 100 mIU/mL.

Human chorionic gonadotropin (hCG) is a hormone that is released during the early stages of pregnancy. This makes hCG a useful and accurate marker in home pregnancy tests. hCG levels start to rise after implantation, which usually happens about 6-10 days after conception (and ovulation). However, most pregnancy tests can’t reliably detect hCG until 14-16 days after conception, which is a couple of days after a missed period for women whose cycle length is 28 days. It’s better to wait until you missed your period than to test early and risk getting a false negative result.