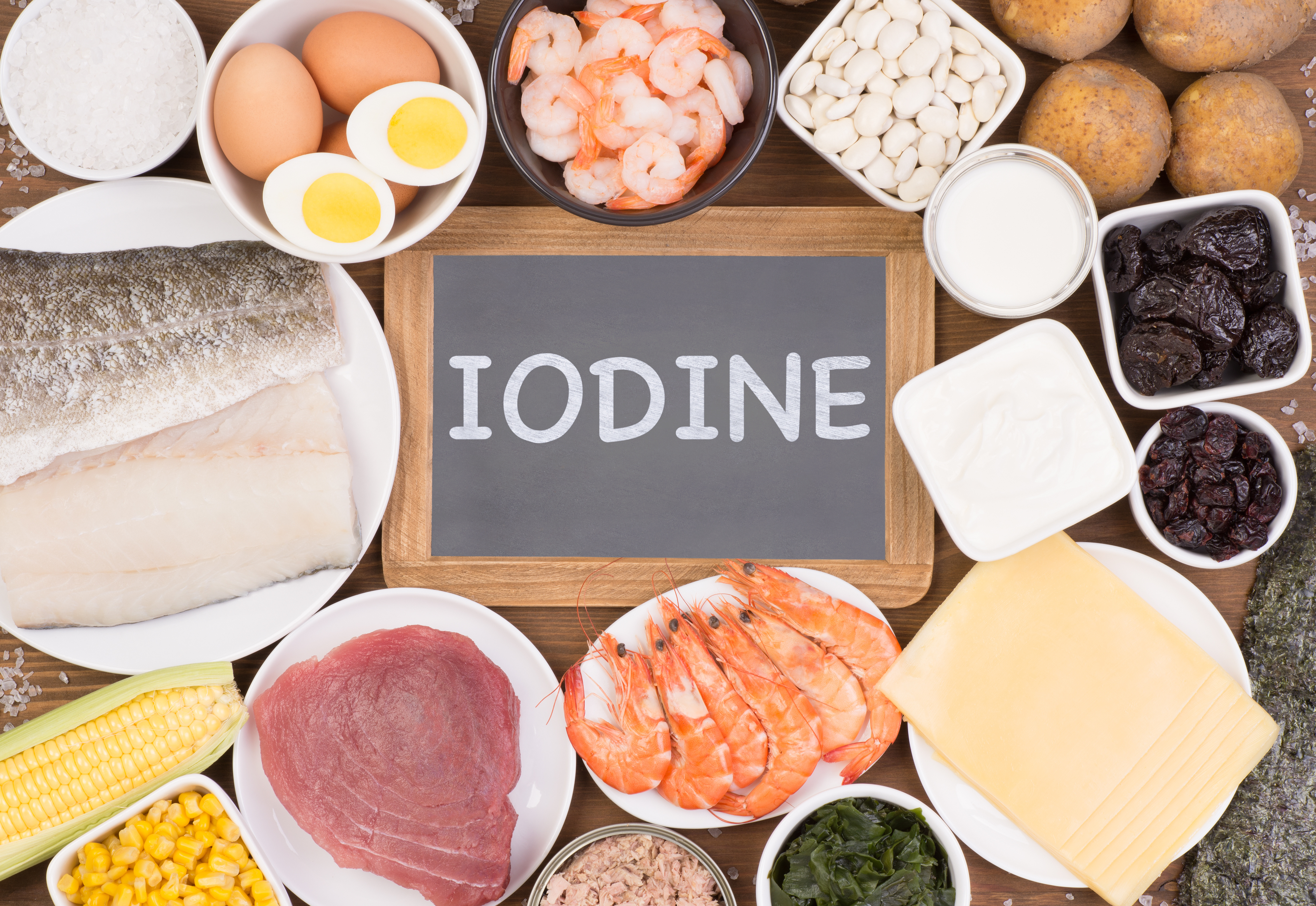 It is difficult to overpraise Iodine. It is an element that our bodies simply cannot do without. And it has to come with diet in appropriate quantities so our life and development throughout life may not be affected. Here is a short list of some proven health benefits of iodine.

Iodine is a chemical element which is the heaviest and the least available of the stable “halogens”. In the human body, iodine exists in thyroid hormones and is thus essential for thyroid function [1].

Iodine deficiency affects about two million people and is the leading preventable cause of intellectual disabilities [2].

The synthesis of thyroid hormones is completely dependent on iodine. They are called triiodothyronine (T3 – three iodine atoms) and thyroxine (T4 – four iodine atoms). This makes iodine a central component of thyroid health [3].

In developing countries, iodine deficiency is the leading cause of low thyroid hormones (hypothyroidism), which can be prevented by correcting iodine status [4].

On the other hand, excess iodine can also be detrimental to thyroid health, so it’s essential to keep its dietary intake in a recommended range (more details below) [5].

The lack of iodine in the diets of pregnant mothers and small children can have detrimental consequences on their physical and cognitive development [6].

In the 19th century, the condition of such children was improved by the addition of thyroid extracts in their diet, but it never improved the development of their intellect, only the body [6].

The other consequence of iodine deficiency is the enlargement of the thyroid gland – goiter [7].

At present, the main method of preventing cretinism and goiter development in children is the introduction of iodized salt into everyday diet [6].

Several studies have shown that the introduction of iodized supplements, mostly iodized salt in the poor areas of Asia and Africa consistently improves the physical and mental condition of children [6].

For instance, a study focused on the effects of iodized salt and other types of iodine supplements in villages of Benin, Africa has shown that children were doing much better with school tasks and tests, compared to the children with low iodine levels [8].

A similar study that was carried out in eastern China has shown that the introduction of iodized salt in the region led to a decrease in goiter incidence among local children [9].

The same effects were observed after the introduction of iodized poppy seed oil in village children in western Cote d’Ivoire [10].

The importance of iron supplementation in children with goiter was corroborated by an independent study in Iran [11].

In pregnancy, the mother requires a lot of iodine (especially in the early stages) as there is an increased hormone production [12].

Iodine has to be transferred to the developing baby and there is a significant loss in the urine [12].

Severe iodine deficiency in the mother affects the child`s brain development greatly and can lead to cretinism [6].

Pregnant women require about 250 μg of iodine daily, and several studies have shown that supplementation during early pregnancy is essential in iodine-deficient hypothyroid mothers [13, 14].

For instance, it leads to an increase in the bodyweight of the newborns, lower newborn mortality, and improved development in young children [14].

Recently, a study has shown that there is a high risk of iodine deficiency in women with high-level obesity [15].

Also, in the case of pregnant women, excess weight can be an additional risk of developing a deficiency in early pregnancy, which affects both the mother and the child [16].

In 163 women with both excess weight and iodine deficiency, the intake of 200 μg of iodine lowered cholesterol concentrations in their blood [17].

In children with a mild form of iodine deficiency, iodine supplementation lowered both markers of inflammation and cholesterol, which helps prevent heart disease [18].

At present, the recommended intake of iodine in the USA and Canada is 220 μg in pregnant and lactating women and 150 μg in nonpregnant women and males [19].

In the countries with low income and low iodized salt coverage – up to 250 μg daily [19].

A recent review also postulated that women living in a population with a median urinary iodine concentration (UIC) at or above 100 µg/l are not in need of iodine supplementation in pregnancy [20].

On the other hand, if the population median UIC is below 100 µg/l pregnant women should take iodine-containing supplements [20].

In regions of moderate-to-severe iodine deficiency (where no iodized salt is available), it is sufficient to give lactating women one dose of 400 mg iodine in form of iodized oil soon after delivery, so they can give their infants sufficient iodine for at least 6 months [21].

Giving any form of supplementation to newborns low on iodine was not considered effective [21].

Surprisingly, iodine deficiency can be present even in developed countries. For example, the United Kingdom is ranked among the top ten iodine-deficient countries in the world [22].

It is crucial not to take too much iodine as well. The safe upper limit for iodine intake in adults is 1,100 μg daily [23].

In a study carried out in Liaoning Province, China, the intake of iodine that exceeded 250 – 499 μg/L led to iodine deficiency disorder and subsequent hypothyroidism [24].

This is due to the so-called Wolff–Chaikoff effect when an excess of iodine leads to a decrease in hormone production by the thyroid gland [24].

The thyroid gland in the baby develops on 10-12 weeks of pregnancy and in a case of excess iodine intake by the pregnant mother hypothyroidism can develop in children as well [24].

There was a report on mothers that overdosed on iodine during pregnancy. The children of those three mothers were diagnosed with hypothyroidism. The correction of the condition was achieved by stopping this overdose coming from supplements [25].

The same condition was reported in children born to Japanese mothers that ate a lot of seaweed during pregnancy [26].

Diets That Can Cause Iodine Deficiency

Among patients with hypertension on a no-salt diet, 24% of men and 40% of women had low iodine concentrations in their urine, so it is important to seek alternative products in such cases [28].

Soy isoflavones may contribute to goiter in susceptible individuals. However, soy consumption may impair thyroid function only in the presence of iodine deficiency or other contributing factors [29].

Cruciferous vegetables such as kale, cabbage, and broccoli are potentially goitrogenic (goiter-provoking) foods; they may reduce the uptake of iodine by the thyroid [30].

What is SHBG? + Symptoms of Low Levels & How to Raise

Endothelins: Roles & Factors That Decrease Them