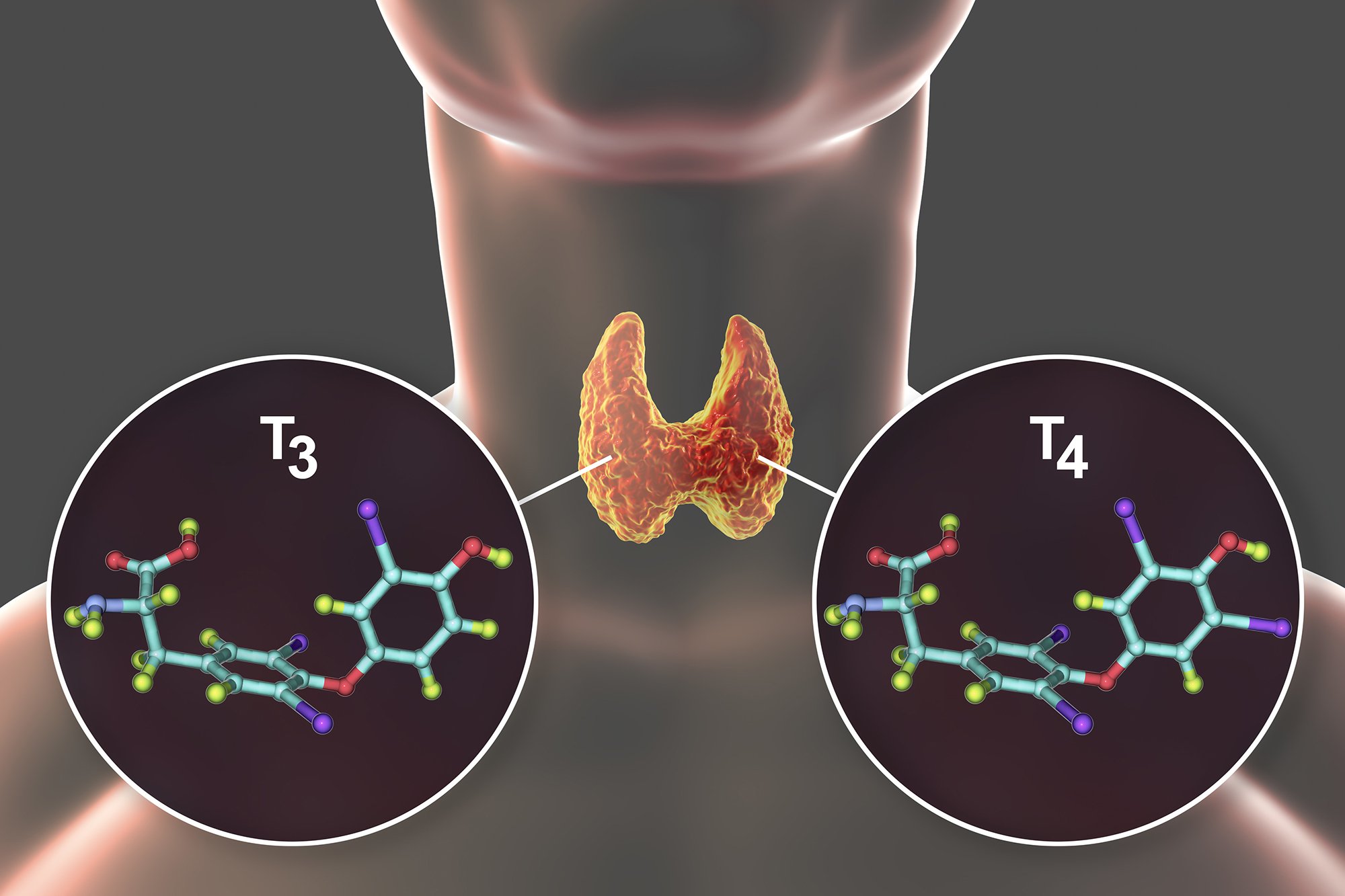 The thyroid hormones (T3 & T4) stimulate energy metabolism, regulate immunity, support cognitive development, and more. Due to their complex metabolic roles, it’s essential for overall health to keep them in the normal range. Read on to learn the diverse functions of thyroid hormones, blood test reference values, and the consequences of high/low levels.

The thyroid gland is located in the base of your neck and is involved in secreting important hormones T4 (thyroxine) and T3 (triiodothyronine).

T4 is synthesized from residues of the amino acid tyrosine, found in thyroglobulin (a protein created in the thyroid). It contains 4 iodine atoms and allows the body to better control the more active T3.

If there are not enough thyroid hormones in the bloodstream, the hypothalamus will signal the pituitary gland (via TRH) to produce TSH for the thyroid to release more T3 and T4.

Reverse T3 (rT3) is the mirror image of T3. It competes with T3 and binds to the thyroid receptor but does not activate it.

These genes include PPAR-gamma, NRF1, NRF2, and other transcription factors that work with them [2].

Thyroid hormone may work in synergy with other receptors, including RXR (vitamin A receptor), or VDR (vitamin D receptor) [3].

Therefore, mitochondrial dysfunction can result in symptoms of hypothyroidism, even in the presence of healthy levels of thyroid hormones.

Immune cells have receptors for T3, and the administration of T3 increases the size and growth of cells in the thymus [6].

The immune system is weakened with stress, making the body more receptive of autoimmune (a condition where the immune system attacks itself) thyroid conditions (eg, Hashimoto’s thyroiditis) [10].

A study found that newly-born rats used their thyroid hormones to regulate the number of neural mast cells, which release histamine as an inflammatory immune response [11].

TSH is lower during the daytime and increases at night around the time we go to sleep. Our biological clock (suprachiasmatic nucleus or SCN) communicates with cells that produce TRH in the hypothalamus. However, T3 and T4 fluctuate much less than TSH, perhaps because they take much longer to produce and degrade in the blood [13].

In depressed people, the nighttime TSH surge doesn’t happen. In addition, this fluctuation of TSH is abnormal in certain other diseases [13].

In healthy men, leptin and TSH fluctuate similarly over 24 hours. The fluctuation of TSH was not observed in men who are deficient in leptin [14].

Nerve cells that control the TRH production and release have receptors for a-MSH [15].

While fixing thyroid problems may help normalize mood and cognitive ability, a severe hypothyroidism cognitive failure will not be completely cured [18].

Subclinical hyperthyroidism (an elevated level of TH with a decreased level of TSH) and higher free T4 within the normal range may cause decreases in thinking ability [18, 19].

Thyroid hormone receptors may be useful as tumor suppressors [22, 23, 24].

Overt hyperthyroidism induces a state of a faster heart rate, especially atrial fibrillation (irregularly quick heart rate that causes poor circulation), whereas overt hypothyroidism is characterized by the opposite changes.

Thyroid hormones increase oxygen consumption and glucose uptake because oxygen and glucose are used in providing energy for the body [29].

In rats, lower thyroid hormones correlated with lower levels of insulin (a storage hormone for glucose) [30, 31].

Hypothyroidism in children leads to delayed growth, while thyrotoxicosis makes bones mature so quickly that children’s bones fuse before the child is ready. T3 builds up bone mass but also can break down bones in adults to increase new bone growth [35, 36, 37].

T4 and T3 supplements can be used for hypothyroid children with inadequate bone development [36].

Iodine builds thyroid hormones, and it’s essential for their optimal functioning. Optimal iodine intake is a major factor of thyroid health, while both excessive and insufficient intake can contribute to different thyroid disorders [38].

A benign goiter is the swelling of the thyroid gland which may occur due to inadequate iodine intake.

Thyrotropin-releasing hormone (TRH) made in the hypothalamus binds to the receptors in the pituitary, causing it to release thyroid-stimulating hormone (TSH), which then stimulates T4 production.

If there is too little of the thyroid hormones in the bloodstream, the hypothalamus signals the pituitary gland (via TRH) to produce TSH for the thyroid to release more T3 and T4.

Once there is enough of these hormones, the hypothalamus is signaled to stop the release of TRH and the cascade of actions to increase T3 and T4.

Conversion of T4 to the more active T3

Both T3 and T4 are produced in the thyroid gland, although T3 is much more potent than T4.

Most T3 is produced by removing iodine from T4 in a process that requires selenium [40].

The total activity of the T3 thyroid hormone in the body depends on the enzyme that converts T4 to T3, which is found outside of the thyroid. This includes:

Carrier proteins bind to most thyroid hormones, leaving only a very small fraction available. These include thyroxine-binding globulin (TBG), albumin, and thyroid-binding prealbumin.

Thyroxine Binding Globulin is made by the liver [41].

If you notice any of the signs and symptoms described low and suspect a thyroid disorder, make sure to seek medical attention. Adequate treatment can keep the symptoms under control and prevent dangerous complications.

Higher levels of thyroid hormones (hyperthyroidism) may cause the following symptoms:

Low levels of thyroid hormones (hypothyroidism) may cause:

Hypothyroidism in adults causes mild anxiety in mice. T3 is suggested to lower the sensitivity of the part of the brain that makes hypothyroid test subjects anxious. More T4 in the body corresponds to less severe anxiety. More severe panic attacks were associated with higher TSH levels [42, 43].

Thyroid dysfunction is often one of the reasons behind chronic fatigue [45].

Mental stress triggers the release of cortisol, which can increase thyroid hormone production [47].

The immune system is weakened with stress, making the body more receptive of autoimmune (a condition where the immune system attacks itself) thyroid conditions (eg, Hashimoto’s thyroiditis) [47].

Too much physical stress can trigger severe thyroid problems in those with prior thyroid disorders, such as untreated hyperthyroidism or Graves’ disease [47].

Winding down mentally through sleep or meditation and light exercise to increase endorphins (hormones to make the body feel happier) helps with thyroid conditions [48].

Sleep deprivation leads to increases in thyroid hormone activity. In this way, the hormone may inhibit sleep [49, 50, 51].

Half a typical dose of sleep deprivation led to higher levels of TSH in the blood; this elevation continued for another day [51].

When a mouse is infected, after food consumption, it will contain 75% less T3, T4, and liver nuclear T3 receptors when compared to uninfected mice [53].

Less thyroid hormone in the body translates to less extensive energy extraction from food molecules, which means there would be less energy wasted for the body. Regular TSH levels reboot after the infection [54, 55].

Thyroid Autoimmunity occurs when the body creates particles (called antibodies, etc) that, though normally is supposed to attack foreign substances, attacks the body’s own thyroid hormone [56].

Often, people with the thyroid receptor beta gene will develop an autoimmune disease [57, 58].

An autoimmune disease (AD) against thyroid hormones will exhibit a rise in TSH (a hormone by the pituitary gland which triggers the release of T3 and T4 from the thyroid) levels in the blood [57].

In addition, the thyroid hormones then regulate the release of growth-related factors (IGF-I and IGFBP-3) [59].

In Graves’ Disease, there’s excessive production of thyroid hormones because the antibodies stimulate the thyroid by activating the TSH receptor [56].