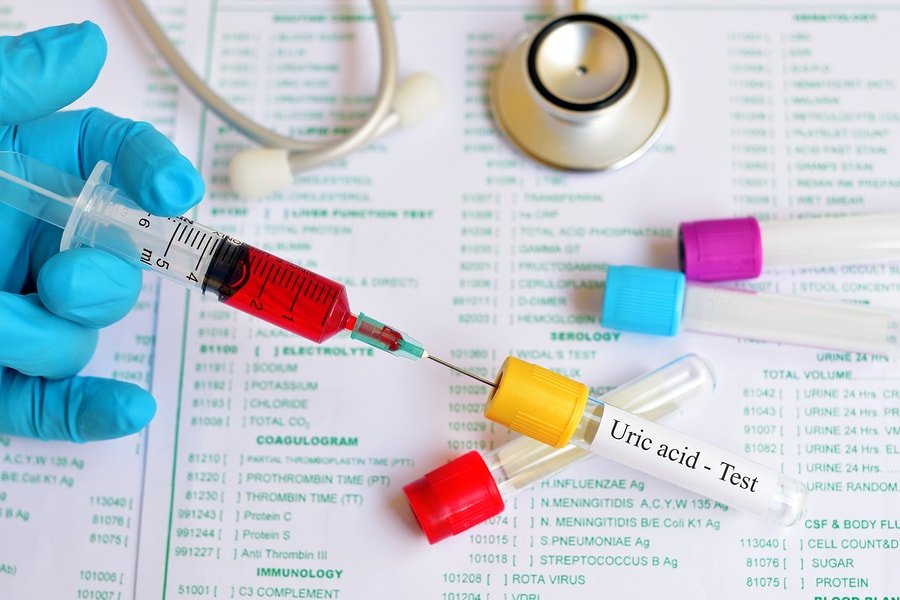 Uric acid can build up in the blood eventually causing gout and kidney stones. Read this post to learn more about uric acid, how it’s made, and which factors increase its levels in the body. At the end of the post, we also review lifestyle and dietary changes that can help decrease uric acid levels.

What Is Uric Acid?

Uric acid is made in the liver. It is the end-product of the breakdown of purine, which is produced in the digestion of certain proteins and DNA, that gets released into the bloodstream when cells get old and die. Some purines are also derived from food [1, 2].

In normal conditions, the majority of uric acid is removed by the kidneys via urine, while the rest is eliminated in the stool. However, if too much uric acid is produced or not enough is removed, it can build up in the blood [3]. Uric acid can then deposit in the body, causing kidney stones or gout [4, 5].

In addition, research suggests that higher uric acid levels may increase the risk of heart disease and diabetes [6, 3, 7, 8].

On the other hand, scientists have discovered that uric acid is not solely a waste product. In fact, studies suggest that uric acid acts as a natural antioxidant and may be responsible for up to 60% of the antioxidant capacity in the blood. In addition, uric acid may protect the brain by preventing neurodegenerative conditions [9, 10, 11, 12].

That is why balanced uric acid levels are important for overall well-being.

Uric acid (urate) is the last step in the breakdown pathway of purines. Purines are first converted to hypoxanthine, then to xanthine, and finally to uric acid. For these last two steps in conversion, we need the enzyme xanthine oxidase (uricase).

Other mammals have the ability to further break down uric acid, but humans have lost it. Consequently, humans are vulnerable to elevated uric acid levels in the blood [13, 1].

A uric acid blood test is commonly used to monitor people who have [15]:

For this test, 24-hour urine is collected to measure the amount of uric acid in the urine and evaluate how the body produces and eliminates uric acid [16, 17].

Normal results for this test are [18]:

An excess of uric acid in the body is known as hyperuricemia. This can occur either when the body is producing too much uric acid, or when the kidneys are not capable of eliminating it efficiently.

However, a result that’s higher than normal, doesn’t necessarily mean that you have a health condition needing treatment. Your doctor will interpret your results, taking into account your medical history, symptoms, and other test results.

People with high uric acid levels are often without any outwardly-obvious symptoms, and generally don’t require medical treatment. However, a build-up of uric acid can cause problems in the long run, such as increased oxidative stress, inflammation, and interference with normal tissue function (joints, kidneys) [3, 19].

Causes listed below are commonly associated with high uric acid levels. Work with your doctor or another health care professional to get an accurate diagnosis.

In a crossover study, the effect of ingesting some purine-rich foods like beef liver, haddock fillets, and soybean was investigated. Results showed that the ingestion of all the test meals caused an increase in blood uric acid levels [21].

Studies have found that each additional meat portion per day increases the risk of gout by 21% [20].

Fructose rapidly raises uric acid levels. High dietary intake of fructose in foods and drinks increase the production of inosine and purines. Also, fructose competes with uric acid for secretion in the kidney [27, 28].

According to a population-based study, obesity is associated with an increased risk of developing hyperuricemia (elevated uric acid). If you are overweight, your body produces more uric acid. And, as a result, the kidney has a more difficult time eliminating uric acid [30].

Blood uric acid levels correlate with leptin levels. Since obese individuals have higher leptin levels (due to leptin resistance), high leptin may be linked to the development of hyperuricemia in obesity [31].

Uric acid levels increase with dehydration, mainly because there is less water in the body and the blood becomes more concentrated [32, 33]. Levels return back to normal after hydrating.

A ketogenic diet reduces the ability of the kidney to excrete uric acid because of competition for transport between uric acid and ketones [37].

In a study of obese people who underwent gastric bypass surgery, uric acid levels and gout attacks initially increase after surgery. However, these people ultimately had lower inflammation and benefited from weight loss [39].

According to a population-based study, alcohol-related diseases were significantly associated with gout risk. Also, severe alcohol-dependent patients had an increased risk of gout [40].

Alcohol may stimulate uric acid production by increasing lactic acid, which then reduces the excretion of uric acid in the kidneys [41].

In a study of 1.7k women over 30, postmenopausal women with vitamin D insufficiency (low levels) were more likely to have higher uric acid levels [44].

A genetic study suggests that there may be a causal link between vitamin D deficiency and elevated uric acid levels, but this requires further confirmation [45].

However, there are also reports of elevated uric acid in some cases of hypoparathyroidism (low parathyroid hormone levels) [51].

People with some rare genetic disorders (Lesch-Nyhan syndrome, Kelley-Seegmiller syndrome) have elevated uric acid levels, due to mutations in the HPRT gene [56, 57].

Many drugs can increase blood uric acid levels, including:

Estrogen is required for the normal elimination of urate through the kidneys.

Men have higher blood uric acid levels than premenopausal women and are more at risk for developing gout [71].

During the post-menopausal period, women have the same content of uric acid as men of similar age, suggesting that low estrogen may have a role in decreasing uric acid levels [71].

Also, the prevalence of gout increases by approximately four-fold to 4.1% by the age of 75 years [73].

Gout is a form of inflammatory arthritis associated with elevated uric acid levels. It occurs when there are high levels of uric acid in the circulating blood, which causes uric acid crystals to settle in the tissues of the joints [5].

The symptoms can appear suddenly, overnight. They include agonizing pain, redness, and swelling of the joint. The attack may be precipitated by too much food, alcohol, by taking water pills, or by dehydration [5].

Symptoms go away after 10 to 15 days but may keep recurring. Eventually, stone-like deposits known as tophi may build up in joints, ligaments, and tendons, which lead to possible joint deformation [5].

The most common risk factor for uric acid stones is acidic urine (pH<5.5) because uric acid stones precipitate in acidic environments. Therefore, people at risk should increase their alkaline load by eating more fruits and vegetables [75].

A study of over 4.5k healthy people who were followed over 10 years showed that higher baseline uric acid levels were associated with a higher risk of developing diabetes. This risk was only partially due to obesity [8].

Scientists think that uric acid may increase the risk of diabetes by increasing oxidative stress and inflammation in the body [8].

A meta-analysis of studies with over 450k people found that those with higher uric acid levels had an increased risk of developing heart disease, especially adult women [76].

Uric acid may harm blood vessels, increase oxidative stress, and cause the platelets and red blood cells to stick together. These increase the risks of heart disease [77, 78, 79].

In a study of 663 people, higher uric acid levels were associated with the hardening of the arteries (coronary artery calcification) [80].

In a study of 1.9 k men and 2.7 women ≥ 65 years of age, increased serum urate levels were associated with an increased risk of hip fractures in men, but not in women [81].

Read this post to learn about the positive health benefits of having high uric acid.

The most important thing is to work with your doctor to find out what’s causing your high uric acid levels and to treat any underlying conditions. If your levels are persistently high, your doctor may prescribe uric acid-lowering medication, such as non-steroidal anti-inflammatory drugs, allopurinol, febuxostat, probenecid, sulfinpyrazone, or benzbromarone [82, 83, 84, 85, 86].

Adopt a low-purine diet. Purines are found in high concentrations in meat, meat products, seafood, and legumes. Replace purine-rich foods with foods low in purines, such as eggs, fruit, cheese, nuts, and vegetables other than legumes [3, 20, 88].

In addition to being low in purines, fruits and vegetables make the urine more alkaline, which helps the kidneys remove uric acid [89, 90, 91].

High intake of fructose and sucrose in foods and drinks both increases the production of uric acid and decreases its elimination by the kidneys [3, 23, 24, 25, 92].

Research suggests that milk proteins promote the excretion of uric acid in the urine [93, 94].

Coffee may help decrease uric acid levels. Studies have found a link between coffee consumption and lower uric acid levels (due to compounds other than caffeine) [96, 97].

This effect is likely partially due to the antioxidant quercetin that cherries have a lot of.

Studies have shown that quercetin supplementation can decrease uric acid levels in men [106, 107].