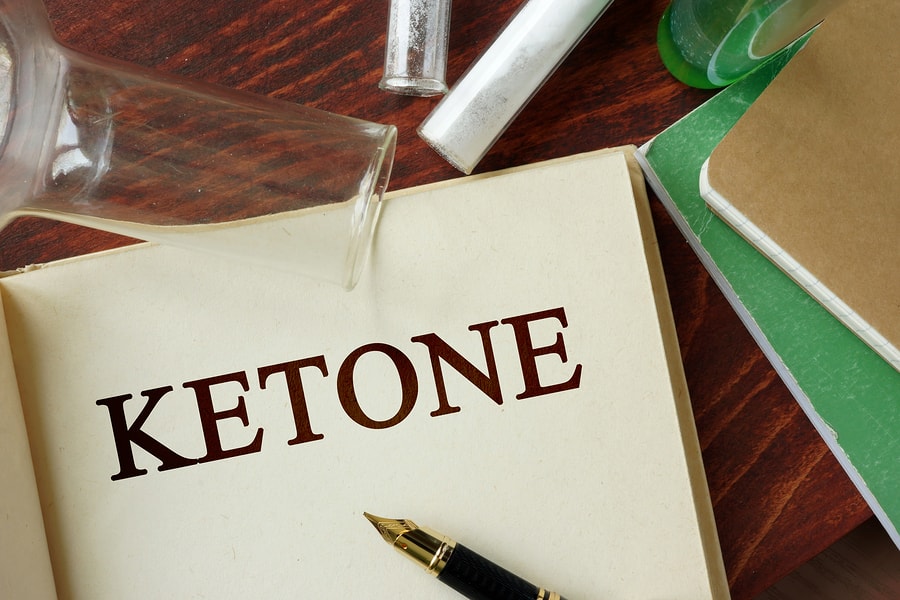 Ketones are organic compounds that contain a carbon-oxygen double bond (carbonyl group) that is single bonded to 2 hydrocarbon groups [1].

They are found nearly everywhere in both industry and nature.

In industry, ketones are used as chemical building blocks to make explosives, paints, and textiles [2, 3].

Ketones are used in natural and synthetic pharmaceutical products. These include antibiotics and steroid hormones (cortisone) [4, 5].

In nature, ketones are found in many sugars (ketoses), including fructose, and hormones (progesterone and testosterone) [6, 7, 8].

Plant-based ketones are known for their sweet smell. They are present in vanilla, cinnamon, almond, and mint extracts [9].

Finally, the blue cheese gets its sharp smell from a group of methyl ketones [10].

Ketone bodies are produced naturally in the liver by the breakdown of fatty acids. When we say ketone bodies, we refer to [11, 12]:

Ketone bodies act as an alternate energy source when carbs are not available because of fasting or prolonged exercise [13].

Beta-hydroxybutyric acid and acetoacetate easily pass through membranes and are a source of energy for the body and the brain [11].

In the absence of carbohydrates and when glycogen (glucose) stores are depleted, fats move to the liver. Fats are broken down into glycerol and fatty acid molecules. Fatty acids are then converted into ketone bodies by a process called ketogenesis [14].

Ketogenesis primarily occurs in the mitochondria of liver cells [15].

Acetoacetate is the precursor to the other 2 ketone bodies, acetone and beta-hydroxybutyric acid [16].

Ketone bodies move to active tissues (muscle or brain) to be converted to acetyl-CoA by a process called ketolysis. Acetyl-Coa is further used to create ATP (ATP = energy) [11, 17].

Beta-hydroxybutyric acid is the most common ketone body in the blood after ketogenesis [11].

Ketosis and Its Symptoms

Ketosis is a buildup of ketone bodies in the bloodstream. In healthy individuals, ketosis can be attained by the consumption of a low-carbohydrate/high-fat diet and fasting [18, 13].

However, it can also be caused by starvation or diabetes (diabetic ketoacidosis), where it can be detrimental to an individual’s health [13, 19].

You have reached ketosis if you present some of the following symptoms soon after starting the diet:

Ketogenic diets involve low-carbohydrate (under 50 g/day) and high-fat consumption. This diet increases levels of free fatty acids and ketone bodies in the blood [20].

A ketogenic diet brings the body into a state of nutritional ketosis, where the body uses fat instead of carbs, for energy [20].

Ingestible ketone supplements and beverages are available as an alternative or addition to the ketogenic diet [21, 22].

According to a meta-analysis of 13 studies with over 1.5k people, those assigned to a low-carb keto diet lost more weight than those on a low-fat diet over the long term (>12 months) [23].

A small study of 84 obese patients and those with type 2 diabetes highlighted that a low-carb diet led to improved glycemic control and reduced or eliminated medication use [27].

In another pilot study with 25 overweight diabetics, those assigned to a keto diet improved their blood sugar control and lost more weight compared to those on a conventional, low-fat diabetes diet online program [28]

Also, according to a study of 64 healthy obese people, a keto diet improved body weight, BMI, blood sugar, and cholesterol [29].

Studies suggest that ketone bodies may have anti-seizure, anticonvulsant, and neuroprotective properties [32].

It is currently unknown whether these effects are due to elevated ketone bodies, reduced glucose, or a combination of these effects [33].

The ketogenic diet has been used since the 1920s as a treatment for certain types of epilepsy. It’s an alternative for people not responding well to anticonvulsants [34].

Craving specific foods may be why many weight-loss diets fail [36].

A study of 34 overweight or obese people with prediabetes or diabetes showed that a reduced (medium and low) carbohydrate diet that uses ketone bodies as fuel reduced the urge to eat carbs and sweets. Ketone bodies also increase dietary restraint [37].

Another study of over 260 obese adults found that compared to a low-fat diet, a low-carb diet decreased urges for carbohydrates and starches, and hunger was less of a bother [38].

After 3 days of a low-carbohydrate/high-fat diet, GLP-1 hormone levels increased in 9 healthy young men [39]. This hormone signals the brain that enough food has been eaten [40].

Larger well-designed studies are needed to confirm these findings.

One study in cyclists, however, suggests that people on a ketogenic diet may perform worse at activities with high intensity [43].

A study of 146 overweight and obese people found that a low-carb diet was more effective for lowering blood pressure than a low-fat diet [44].

More studies are needed to confirm this and to check if it applies to all people with high blood pressure irrespective of their body weight.

A study in 96 overweight women with migraines found that keto diet reduced the frequency of attacks and days with headache [45].

Further research is needed to establish whether the absence/restriction of dietary carbs, the presence of ketone bodies, or both, play a role in migraine prevention.

Keto diet seems to be effective in epilepsy. But what about other types of seizures?

In a study of 24 adults with seizures, seizures resolved in 11 out of 14 people who were on a ketogenic diet [47].

However, this is one small-scale human study. It requires confirmation. In addition, safety and efficacy need to be established with randomized placebo-controlled trials.

In a study of 152 patients diagnosed with Alzheimer’s disease, the consumption of an oral ketone supplement improved cognition [49].

A low-carbohydrate diet improved the memory of individuals in a study of 23 seniors with mild cognitive impairment [50].

In a mouse model of amyotrophic lateral sclerosis, a ketogenic diet increased the number of motor neurons in the spinal cord and preserved motor function [52].

Larger, well-designed studies are needed to confirm the effect of a keto diet on cognitive function.

Cell studies have found that ketone bodies have an antioxidant capacity within mitochondria by reducing cell death and reactive oxygen species production. They scavenge the body for free radicals and inhibit oxidative stress that can result in severe damage and disease [53].

Animals fed a ketogenic diet had enhanced the mitochondrial antioxidant status and their mitochondrial DNA was protected from oxidant-induced damage [54].

In fact, both animal and human studies have found that the transition from glucose to ketone body metabolism turns on anti-inflammatory mechanisms [58, 59].

In animal models or multiple sclerosis, a ketogenic diet had a protective effect on brain inflammation [64].

The ketogenic diet is relatively safe (when done right).

Many of these negative effects will disappear once your body adjusts to the ketogenic diet.

Studies suggest that a long-term ketogenic diet may increase the risk of kidney stones, but this can usually be counteracted by drinking plenty of water and supplementing with citrate [69].

Work with your doctor or nutritionists to make sure your keto diet is healthy and well balanced, and contains all important nutrients. It’s best if the keto diet is implemented under careful medical supervision.

Read more about important nutrients on a keto diet here.

Individuals who lack PPAR-alpha may not efficiently use ketone bodies as fuel [71].

There is insufficient evidence that a keto diet is safe in pregnancy and lactation. Avoid using it unless your doctor tells you otherwise.

Ketone Levels in the Body

Ketone bodies greatly increase in the blood of those on a low-carbohydrate, high-fat diet [72].

Some experts on the ketogenic diet define nutritional ketosis as a blood ketone range from 0.5 to 3.0 mmol/L. Ketones in the blood can be measured by a small pin-prick blood test available over the counter [73].

However, increased ketone bodies in the blood can indicate diabetic ketosis. In that case, a blood test measuring the concentration of beta-hydroxybutyrate should be done [74].

Ketonuria indicates an excess production of ketone bodies. It can be detected using at-home test kits that are most sensitive to acetoacetic acid [75].

Large amounts of ketone bodies in the urine may indicate diabetic ketoacidosis which can lead to diabetic coma [76].

Acetone in the breath is associated with ketone bodies in the blood and can act as a predictor of diabetic ketosis [75].

The concentration of acetone in the breath is elevated in individuals with type 2 diabetes [77].

Ingestible ketone supplements and beverages are an alternative or addition to the ketogenic diet [21, 22]. Supplements include ketone salts, ketone oils, and ketone esters.

Ketone esters contain the raw beta-hydroxybutyrate ketone body without the salt. Ketone esters are rapidly absorbed and used for energy, however, they have an undesirable taste [78, 22].

Eating ketone oil is not as direct as consuming ketone salts or esters because the oil must be digested to extract the energy. Ketone oils include coconut oils or medium-chain triglyceride (MCT) oil powder [79].