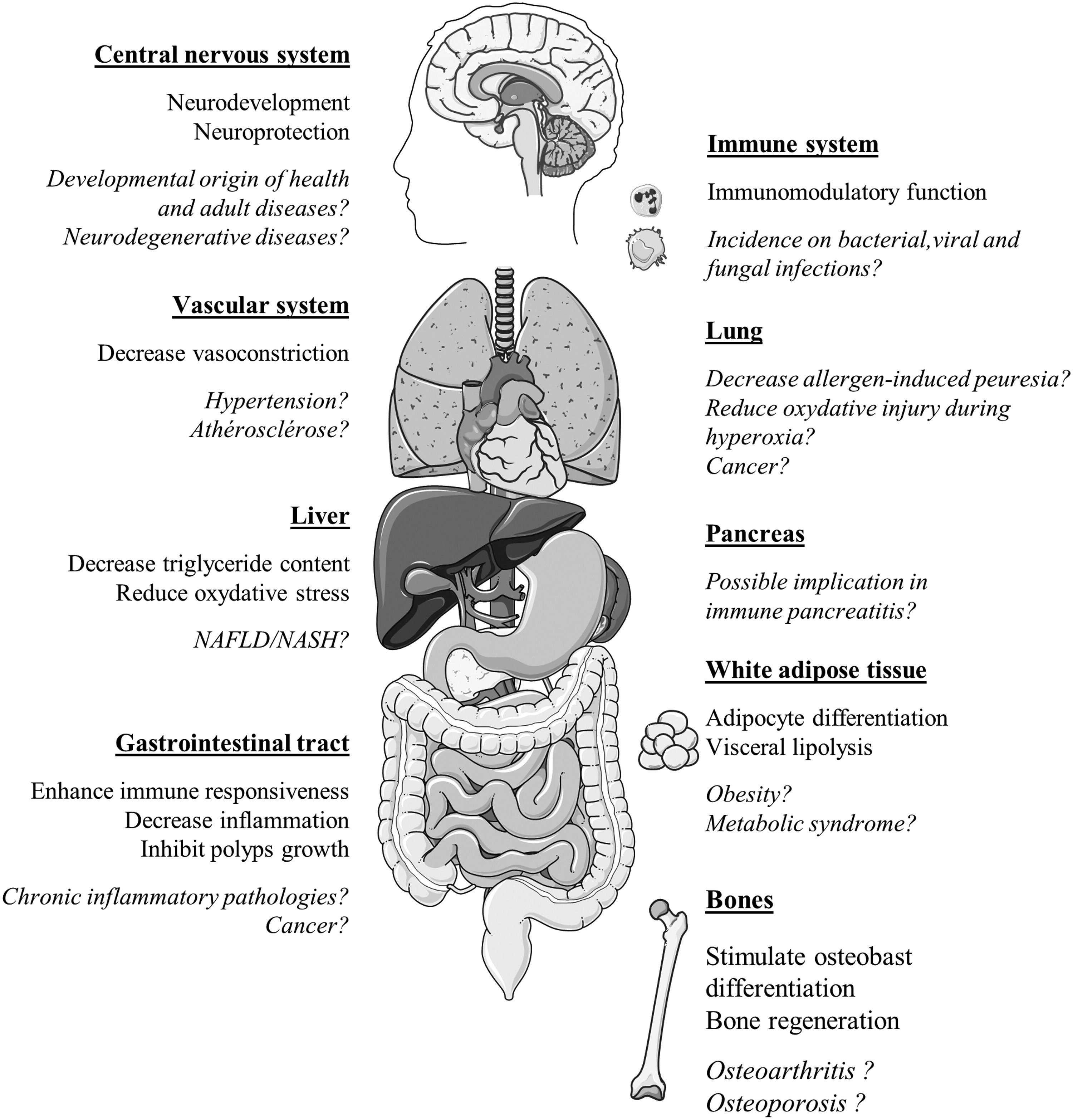 Lactoferrin is a naturally occurring protein found in milk and bodily fluids. It is a potent anti-microbial and modulator of the immune system. As a supplement, lactoferrin may improve iron status, skin health, immunity, and more. Read this post to learn the health benefits of lactoferrin, along with food sources & side effects.

Lactoferrin (also known as lactotransferrin or LF) is a type of iron-binding glycoprotein that is mostly secreted from bodily fluids including milk, saliva, tears, vaginal fluids, semen, secretions from lungs and nose, bile, digestive juices, and urine [1].

It provides antibacterial and immune-supporting activity to human infants. LF is a component of the immune system responsible for defense at the mucosal level, due to its high antimicrobial activity.

Lactoferrin is also found in secondary neutrophil granules, blood, and amniotic fluid. It also binds to DNA and other molecules in milk like IgA, casein, albumin, etc. [2, 1].

It helps develop the gastrointestinal and immune system in newborns [3].

Marker of Inflammation and Infections

Lactoferrin kills bacteria and protects from infections. Therefore, natural lactoferrin levels in our bodies rise during times of infections and inflammation.

Doctors test lactoferrin in the stool to detect inflammation in the intestines, especially to diagnose inflammatory bowel disease [5].

Lactoferrin supplementation can support the immune system as an antioxidant [8].

There are lactoferrin receptors on many immune cells, so lactoferrin directly affects how these cells function [9, 10, 11].

In infants, lactoferrin is crucial to the development of their natural immune system function to prevent infection [16].

Although the direct mechanism has not been established yet, lactoferrin is a well-known anti-inflammatory component in humans [17].

Lactoferrin in the amniotic fluid is an important component to reducing fetal inflammation in pregnant women through reducing IL-6 levels and reducing infection causing the inflammation [18].

It has anti-inflammatory properties when interacting with the immune system against the Epstein-Barr virus, reducing inflammation by inhibiting the activation of TLR2 and TLR9 in the virus DNA [19].

Lactoferrin helps stop the activity of bacteria. Most bacteria need iron to function, and lactoferrin can stop bacteria from taking up iron in the human body [1].

In addition to this, it can block bacteria’s carbohydrate metabolism, destabilize their cell walls, or interact with lysozymes in milk to stop bacteria [1].

In human fetuses, lactoferrin serves as a bone growth regulator in the early phases of human bone development [21].

In human fetuses, LF promotes iron absorption and development of the brush border, allowing for healthy growth and gut development before birth [23].

High levels of LF in the fetus prevent infection and ruptures of fetal membranes while increasing the ease of labor [24].

Lactoferrin helps increase iron absorption in the intestine. It is also responsible for the delivery of iron to cells.

According to a meta-analysis of four clinical trials and 600 pregnant women, “oral bovine lactoferrin is just as good as ferrous sulfate in improving hematological parameters with fewer gastrointestinal side effects.” Lactoferrin showed better effects on hemoglobin levels in pregnant women with moderate anemia [25].

Preliminary reports suggested that human and bovine lactotransferrin can kill bacteria in the intestines and help stop necrotizing enterocolitis. A study of 743 preterm infants confirmed these findings [26, 27].

Lactoferrin is naturally found in breast milk in high amounts, which is another reason why breastfeeding is essential for infant development [28].

36 young adults were given milk with lactoferrin and their skin condition improved. They had less acne and skin inflammation compared to the placebo group [31].

22 psoriasis patients also benefited from topical application. The redness and size of their skin lesions improved after applying 10% or 20% LF cream (equally effective) [32].

In 55 diabetic patients, topical applications of recombinant lactoferrin improved the healing of foot ulcers with no side effects [33].

In a preliminary study of 11 patients with chronic hepatitis C (CHC), an 8‐week treatment of bovine lactoferrin (1.8 or 3.6 g/day) significantly reduced serum alanine transaminase (ALT) and the viral RNA in patients with milder forms of infection [34].

The same group of researchers then conducted a placebo-controlled trial of 63 CHC patients. They found that bovine lactoferrin (600 mg/day) produce a Th1-cytokine dominant environment (IL-4 and IFN-gamma), which supports the IFN therapy for hepatitis C [35].

Two additional studies of 310 CHC patients confirmed that lactoferrin may increase the effectiveness of standard treatment, but doesn’t have therapeutic properties on its own [36, 37].

No valid clinical evidence supports the use of lactoferrin for any of the conditions in this section. Below is a summary of up-to-date animal studies, cell-based research, or low-quality clinical trials which should spark further investigation. However, you shouldn’t interpret them as supportive of any health benefit.

In a study of 110 patients with advanced or metastatic lung cancer, talactoferrin significantly improved the effectiveness of standard treatment (carboplatin + paclitaxel) [39].

Talactoferrin significantly improved survival in a trial of 100 patients with chemotherapy-resistant lung cancer. However, it didn’t show significant benefits for the same condition in a much larger study of 742 patients [40, 41].

In rats, supplementation of bovine lactoferrin interacted with phase 1 enzymes to reduce the carcinogenic effects of lung, bladder, tongue, colon, and liver cancer. It also had the ability to restore white and red blood cell count after chemotherapy (43, 44).

Larger, well-designed clinical trials should investigate the anticancer effects of lactoferrin. At this point, it can’t be recommended for cancer treatment or prevention.

Lactoferrin appears to control fat accumulation in humans. There is also some evidence that iron deficiency might contribute to obesity, but more studies need to be done [48].

Further research is needed to confirm the benefits of lactoferrin for weight control. Caloric restriction and regular exercise remain the best approach that no supplements can replace.

In a study of 32 Japanese women, LF suppressed the growth of E. coli and Salmonella while promoting the growth of beneficial Bifidobacteria. As a result, the treatment significantly improved digestion and relieved constipation [49].

No clinical evidence supports the use of lactoferrin for any of the conditions listed in this section. Below is a summary of the existing animal and cell-based research, which should guide further investigational efforts. However, the studies listed below should not be interpreted as supportive of any health benefit.

In animals with bacterial LPS toxicity, injecting them with lactoferrin reduces many symptoms of toxicity, and reduce risks of death from LPS toxicity by five-fold [51, 52].

Lactoferrin and lysozyme prevented the spread of Streptococcus pneumoniae to sterile cells in a cell-based study [53].

In mice infected with Listeria monocytogenes, treatment with lactoferrin boosted the immune function and decreased the overall level of invading bacteria [54].

In test tubes, human lactoferrin taken alongside iron supplementation was successful in fighting Actinobacillus pleuropneumoniae infection by inhibiting the growth and spread of the bacteria [55].

In human cell cultures, lactoferrin can prevent viruses from entering human cells by blocking cellular receptors or directly binding to the viruses [56].

The bovine lactoferrin was more efficient than the human version in stopping the herpes virus in human cell culture. However, both types were able to stop the virus from entering the cells [56].

Lactoferrin was also effective in stopping the effects of HIV by blocking the entry process in vitro [56].

Both bovine (cow) and human lactoferrin stopped the growth of fungi in human cell cultures [57].

In cows infected with a parasite, lactoferrin supplementation increases the immune system response to the parasite, helping to expel it from the body [58].

In a study on piglets, lactoferrin helped improve cognition and brain development. They learned how to complete learning tasks more efficiently [61].

Lactoferrin is safe and well-tolerated; high doses (>1,100 mg a day) might cause some abdominal pain, diarrhea, or constipation [62].

In some human subjects, injections of 5 mg of LF may increase liver enzymes. Further studies will be needed to test the safety of LF injections in humans [63].

Lactoferrin is heat stable and may survive pasteurization, but not high-pressure treatment [64].

In milk and colostrum, lactoferrin is at the concentration of 7g/L [66].

About 60 – 80% of ingested lactoferrin from cow’s milk survives stomach digestion in humans depending on whether it is bound to iron [67].

Some lactoferrin is digested by stomach enzymes like pepsin. This digestion results in smaller proteins or peptides which have stronger antimicrobial activities than the protein itself.

Lactoferrin and its peptides are absorbed either just through intestinal cells or through the Intelectin 1 receptor. It gets incorporated into the lymphatic system before entering the systemic circulation. It can also be transported into the gut immune system [68].

Once lactoferrin enters systemic circulation, it is cleared rapidly by the liver [69].