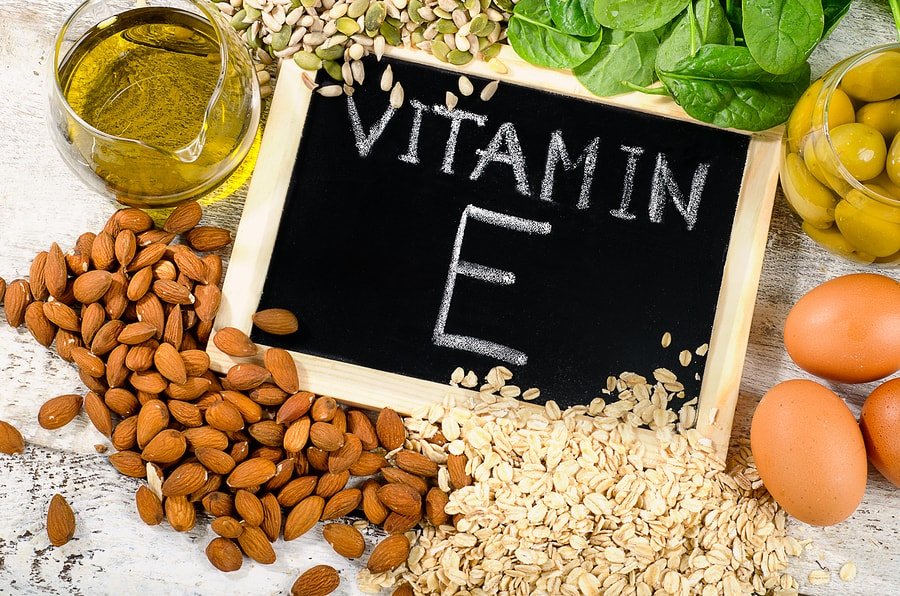 Vitamin E is of vital importance to fertility, pregnancy, and development, but there are safe upper limits to observe.

What is Vitamin E?

The most studied forms that are also used in commercial dietary supplements are alpha-tocopherol and gamma-tocopherol. Tocotrienols found in palm oil are also garnering some attention from researchers [1].

The NIH recommends that adults get at least 15 mg of vitamin E in their diets every day, with an increase to 19 mg for lactating mothers. They warn that the tolerable upper limit per day is 1,000 mg (or 1 g) for all adults, including pregnant or lactating mothers [2].

For this reason, vitamin E supplements are only recommended to pregnant women if they are determined to be deficient. Talk to your doctor before taking vitamin E if you are pregnant or lactating.

In our diets, members of the vitamin E family most abundant in plant foods [1].

Tocotrienols are rarer and can be found in palm oil, barley and some cereal grains [1].

Why is Dietary Vitamin E Necessary?

The most prominent property of all vitamin E forms is blocking the activity of harmful oxygen and nitrogen species [1].

As vitamin E readily interacts with fats, it is also an important protector of fat molecules, preventing their oxidation along with vitamin C [3].

It was shown that low vitamin E and C levels are associated with a higher oxidation of fats [3].

As fats are crucial building blocks for all cell membranes, low intake of vitamin E or genetic inability to use it leads to severe consequences. Vitamin E deficiency is associated with severe disruption of movement and coordination in young children [4, 5].

As was already mentioned above, when vitamin E was discovered, it was considered mainly a fertility factor [1].

In a mouse study, a diet low in vitamin E-rich cabbage leaves led to spontaneous abortions in pregnant mothers [1].

It may be connected to the fact that, during pregnancy, the concentration of a vitamin E-binding protein called afamin in the blood grows almost twofold. The role of afamin in pregnancy remains unclear, however [6].

Another protein connected to alpha-tocopherol and its transport, this one called TTPA, plays very important roles in pregnancy and development [7, 8]

It was shown that the concentration of this protein was very high in human placenta and only human liver had a higher level of TTPA [7].

In mice, the absence of TTPA gene made the female animals unable to give birth [9].

If those mice were given alpha-tocopherol in the early days of pregnancy, from 6.5 to 13.5 days after conception, they could carry their pregnancy to term [10].

The authors concluded that alpha-tocopherol was critically important for the development of the placenta [10].

Vitamin E addition to the therapy was beneficial for infertile men and women in several clinical studies [11, 12, 13, 14].

One very small clinical trial investigated the effect of vitamin E in three women with ovarian failure that could not be helped by hormone therapy. The patients were given a combination of 1,000 IU tocopherol and 800 pentoxifylline daily for at least 9 months. At the end of the study, the women experienced an almost twofold increase in the thickness of the uterine wall; of the three participants, two achieved viable pregnancies from embryonic implantation [11].

In another study, vitamin E was added to therapy with clomiphene citrate, a drug that helps stimulate egg cell production in women with unexplained infertility. The addition of vitamin E increased the thickness of the patients’ uterine walls but did not influence other parameters [12].

Vitamin E may support male fertility as well. It was shown that daily supplementation with Carni-Q-Nol, a cocktail containing vitamin E and vitamin C, improved several parameters in the sperm of men with diagnosed infertility. After 3 months of treatment, the sperm of the patients became 48% denser and the level of DNA damage became 25% lower [13].

In another study, supplementation with selenium (200 μg) and vitamin E (400 units) in men with fertility problems made their sperm 52 % more mobile and improved other parameters [14].

The vitamin therapy also led to a 10% increase in pregnancy rates for their partners [14].

The study mentioned was not designed as a proper clinical trial, which means the findings need further confirmation [15].

The influence of vitamin E on early development was studied both in relation to tocopherol transfer protein (TTPA) mentioned above and alpha-tocopherol itself. However, much of the work has been done in animals – because you simply cannot experiment on human fetuses – so the degree to which these results apply is unclear.

Some mutations in the gene produce a protein that cannot transport alpha-tocopherol out of the cells; a mutation linked to a more severe form of AVED demonstrates the worst disruption of TTPA activity [16].

Studies performed on zebrafish have shown that TTPA is also important for the development of eyes, head and tail regions in this animal. This result suggests a role for vitamin E and TTPA in brain and spinal cord development [8].

Combined supplementation of pregnant diabetic rats with vitamin E and folic acid lowered the risk of death for the embryos. This combination prevented the buildup of proteins that induced cell death, leading to increased survival rates for embryos [17].

The addition of vitamin E form gamma-tocotrienol to the diet of mice exposed to nicotine can protect the mice embryos [18].

From animal studies, it is clear why vitamin E is called a fertility factor, as it has a profound influence on early development: it helps the newly fertilized egg to attach, influences nerve development, and even protects the developing fetus from damage.

In the US, the daily dose consists of 12 mg of alpha-tocotrienol and the recommended intake is 15 mg [4, 2].

The NIH recommends an increase to 19 mg for breastfeeding women [4, 2].

If you believe that you could be deficient, look to increase your intake of plant foods containing vitamin E. Talk to your doctor about whether supplementation is right for you, especially if you are pregnant or breastfeeding.

It should be noted that vitamin E works differently with other vitamins: for example, an overdose of vitamin E can cause bleeding and it can block the action of vitamin K that is responsible for blood vessel integrity [4].

On the other hand, it can work in tandem with vitamin C, as they have similar properties [4].

It is important to know that the effectiveness of the distribution of vitamin E depends on many factors, most notably diet [19].

In one study, vitamin E was better taken up by the white and red blood cells of healthy people that took the supplement with a high-fat meal (high-fat toast and butter) [19].

The uptake of vitamin E may also be dependent on what genes people have (in case of the present study – ApoE3 or ApoE4 gene variants) [19].

In several studies, vitamin E was absorbed worse by smokers than non-smokers [20, 21].

In a very small study of 6 smokers and 5 non-smokers, vitamin E disappeared from the blood of smokers approximately 20 days faster compared with nonsmokers [20].

A later study repeated this finding and further demonstrated that vitamin C disappeared faster from the blood of smokers as well [22].

In a more recent study, supplementation with 500mg vitamin C twice daily for two weeks in smokers helped to slow down the disappearance of vitamin E from the blood by about 45% [21].

Vitamin E also appears to have poorer absorption in patients with metabolic syndrome [23].

5 Health Benefits of Guarana + Side Effects