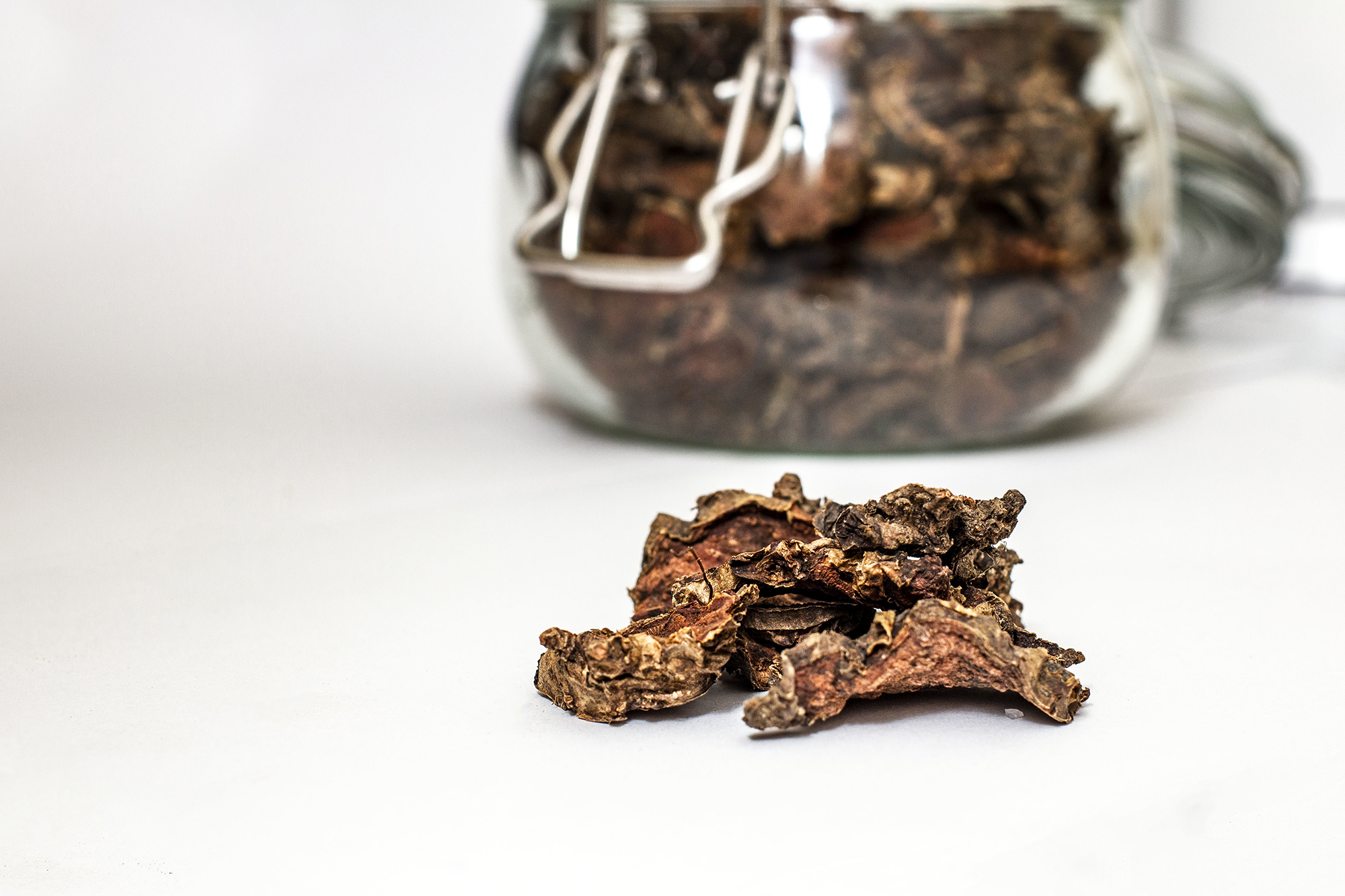 Rhodiola rosea is an adaptogen with a long history of traditional use against stress, fatigue, and more. How does it work, and what are the potential side effects? Read on to find out.

What Is Rhodiola rosea?

Rhodiola rosea is a flowering plant that grows in very cold climates and at high altitudes. Its root has been used in traditional medicine in the Caucasus Mountains, Scandinavia, China, and Russia, where practitioners believe that it can improve focus and endurance in both body and mind [1, 2].

Other species closely related to R. rosea are also used in traditional medicine. These include Rhodiola imbricata, Rhodiola algida, and Rhodiola crenulata. Together, these herbs are best known as adaptogens: substances that help combat stress. However, Rhodiola roots and extracts are also being investigated for other potential cognitive and physical benefits [3, 4, 5].

For more about the potential benefits of rhodiola, check out this post.

Rhodiola has many other names: in China, it is called hóng jǐng tiān. Elsewhere, it may be called rosenroot, rose root, Arctic root, golden root, or king’s crown. In French, it is l’orpin rose [6, 7, 8, 9, 10].

Rhodiola rosea is a high-altitude plant whose root has been used to combat stress in traditional medicine for many generations.

Salidroside, also known as rhodioloside, is considered to be the most important bioactive molecule in Rhodiola rosea. It is likely responsible for Rhodiola’s effects on the brain [11, 12].

Rosavin has many of the same properties and mechanisms as salidroside, but seems to require a higher dose to produce the same effect [13].

Tyrosol is present in standardized Rhodiola rosea extracts, but it often goes unlabeled on commercial supplements. Tyrosol is an antioxidant and may also contribute to Rhodiola’s beneficial properties [14].

The active components of rhodiola include salidroside, rosavin, and tyrosol, with salidroside believed to be the most important.

Rhodiola is an important herb in traditional medicine in parts of Europe and Asia. According to practitioners, it helps people with stress, anxiety, fatigue, depression, brain fog, burnout, and heart problems. It’s also used to boost the immune system and increase lifespan [15, 2].

That’s an awfully long list – does the research back it up? You might not be surprised to hear that it’s complicated [15, 2].

Many of Rhodiola’s reported effects could be attributed to a protein called AMPK. AMPK is important for energy balance and for preventing oxidative stress. It prevents insulin resistance, keeps blood sugar down, and stops fat buildup in the liver. When free radicals build up, AMPK increases the production of antioxidant proteins [16, 17, 18].

Nuclear factor-κB (NF-kB) controls many genes that cause inflammation, and it is very active in inflammatory diseases like arthritis, Crohn’s disease, and atherosclerosis. AMPK reduces inflammation by decreasing the activity of NF-κB [19, 20].

AMPK may also increase the activity of PI3K, an important protein for insulin signaling [17, 21].

In cell studies, rhodiola activates a protein called AMPK, which acts as a kind of metabolic “switch,” increasing insulin sensitivity, reducing blood sugar, and preventing fat buildup in the liver.
Get the Regimen of A Top Biohacker

Nrf2 is a protein that activates numerous important antioxidant proteins and protects against oxidative stress. In cells, rhodiola’s bioactive components increased the activity of Nrf2 and its antioxidant effects [25, 26].

In combination, the JAK2 and STAT3 genes form a pathway that increases inflammation. Salidroside from Rhodiola blocked this pathway and thereby reduced inflammation in cell studies [27, 28].

Because of some disagreement in the scientific community about the various effects and mechanisms of rhodiola, the FDA has classified it as a poisonous plant. Furthermore, the ingredients and active compounds in commercial Rhodiola supplements may not be accurately labeled. We recommend caution when choosing to supplement [15, 29].

Taken alone, Rhodiola is generally safe and well-tolerated in therapeutic dosages, with only mild to moderate side effects. The most common side effects in people taking this herb for anxiety were dizziness and dry mouth [30].

At a dose of 660 mg/day, combined with vitamin C, it decreased mental fatigue, increased exam scores and language-learning ability in teenagers. Rhodiola’s effects on children have not been formally studied. Rhodiola tea is traditionally given to children in the Caucasus Mountains, but we recommend against giving rhodiola supplements to children [35, 1].

Rhodiola is classified as a poisonous plant by the FDA despite being generally well-tolerated in clinical studies. Commercial supplements may be inaccurately labeled, and the safety profile of rhodiola is incomplete in pregnant and breastfeeding women.

Salidroside and rosavin are highly active molecules with diverse effects in the body. As such, anyone taking prescription medication should be careful when supplementing with Rhodiola. Talk to your doctor before supplementing to avoid adverse effects and unexpected interactions

If you are taking antidepressants, do not supplement with Rhodiola without consulting your doctor.

Rhodiola lowers blood pressure by activating AMPK. We recommend caution when supplementing if you are already taking medication to lower your blood pressure [42].

Many blood pressure medications are also metabolized by CYP2C9. See the section below for more details [43].

Diabetes medications (like metformin) and blood pressure medications may interact dangerously with rhodiola.

Many drugs are broken down by a group of enzymes called cytochrome P450s, or CYPs. In the liver, CYPs metabolize many medications: if CYPs are blocked, these medications will stay in the bloodstream for longer and in higher concentrations. Their effects may then be more intense [44, 7].

Contradictory studies have suggested two opposite effects of Rhodiola on the CYP enzyme CYP2C9. In two studies, it blocked the effects of CYP2C9; in one study, salidroside alone increased the activity of CYP2C9. More research is required to fully understand how this plant and its active compounds affect CYP2C9 [44, 7, 45].

CYP2C9 substrates include any compound metabolized by this enzyme. These medications may reach higher blood levels when combined with Rhodiola extracts:

Some of these medications, especially warfarin and phenytoin, have a narrow therapeutic index. This means that very small variations in dose can have a wide variety of effects. In some cases, even a change in diet can alter the effect of these drugs. Rhodiola may interact with warfarin and phenytoin in unexpected ways. Consult your doctor before supplementing if you are taking these medications [47, 44, 48].

Other drugs increase or decrease the activity of CYP2C9 and may interact with Rhodiola, but these interactions have not yet been studied. We advise caution when combining this herb with any prescription medication.

Rhodiola extract may affect CYP2C9, an enzyme responsible for breaking down NSAIDs, anticoagulants, and many other medications. Talk to your doctor and discuss all of your medications before taking rhodiola supplements.

PRKAA1 is a gene that produces the most active piece of the AMPK protein. Among women living at high altitudes, variations in this gene affect the birth weight of their children and the width of the artery that feeds the baby in the womb. In particular, women with certain variations in the SNPs rs929785, rs1345778, and rs3805490 had wider uterine arteries and gave birth to heavier babies [49].

This effect may be caused by increased AMPK activity, which has a protective effect in low-oxygen environments. Because Rhodiola activates AMPK, people with variations in these SNPs may react more strongly to it; this interaction has not been confirmed. More research is required to confirm interactions between PRKAA1 and compounds that affect AMPK [49, 50].

COMT is an enzyme that inactivates and breaks down dopamine (and other monoamines) in the brain. It ensures that dopamine levels don’t stay too high, which is important for the correct function of the prefrontal cortex and basal ganglia [51, 52].

Rhodiola inhibits COMT and raises the amount of available dopamine in the brain. Thus, people with low COMT function are better off avoiding this adaptogen, as well as all other herbal COMT inhibitors [55].

People with certain genetic variants in the PRKAA1 and COMT genes may respond differently to rhodiola supplements.

Rhodiola is often combined with other herbal supplements, including ashwagandha. Some practitioners recommend combining these two herbs to improve ADHD symptoms; however, there are no formal studies on this herbal blend [1].

Ashwagandha decreases stress by reducing the amount of cortisol and other stress hormones in the body. Ashwagandha also improves cognitive function and has antioxidant and immune-boosting effects [56, 57, 58, 59].

However, ashwagandha and Rhodiola have different active components. Ashwagandha’s therapeutic effects are probably caused by withaferin A and withanolide D; Rhodiola’s most active components are salidroside and rosavin. These compounds, in combination, may work better than any one of them alone. However, this has yet to be researched [60, 61].

Rhodiola may be combined with ashwagandha in certain commercial supplements. There is no available clinical research investigating this combination.

This herb has many potent bioactive compounds, including salidroside and rosavin, and drug interactions are possible. Consult your doctor if you plan to start supplementing, especially if you are currently on prescription medications.