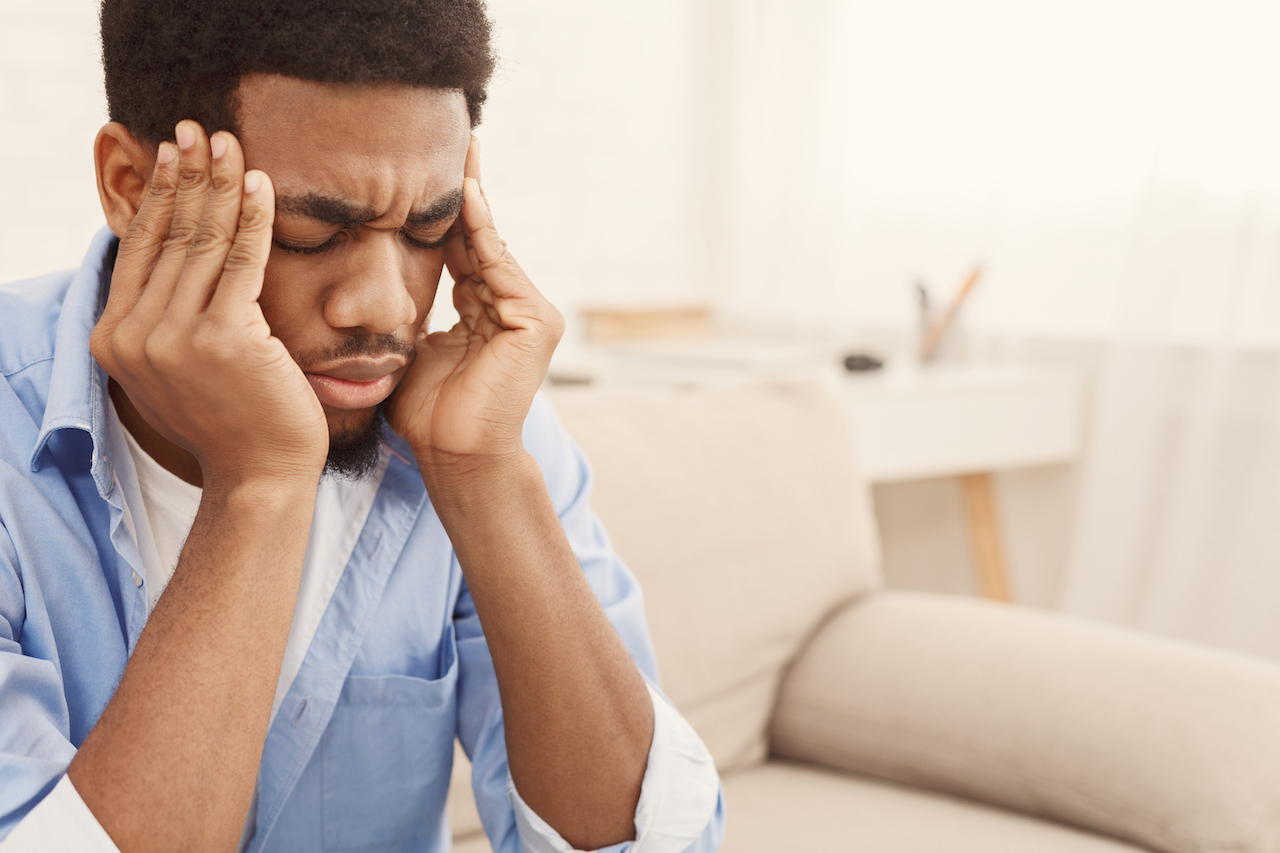 People say CBD oil relieves migraines and headaches. Research reveals that medical marijuana and THC may provide some relief – but does CBD alone help? And what’s the best way to take it? Read below to find out.

Toward the end of the 19th century, cannabis was a mainstream therapy for preventing and relieving migraines and other types of headaches. Many doctors advocated for its use until the 1940s, when cannabis was removed from the official pharmacopeias due to its “high potential for abuse” [1+, 2].

The recent legalization of medical marijuana and CBD oil in many countries worldwide revived the almost-forgotten use of cannabis for headaches. However, it’s important to note that the only medical use of CBD approved by the FDA is to reduce seizures in two types of epilepsy [3].

Migraines and other types of headaches are, after arthritis, the painful conditions most commonly improved with CBD oil. In a survey on 1500 medical CBD users, approximately one out of six reported suffering from headaches [4].

Similarly, ~30% of medical cannabis users reported doing so to relieve migraines and other headaches in 2 surveys on almost 2500 people. However, the most popular variety among them was “OG Shark,” a THC-rich hybrid strain with a low CBD content [5, 6].

This leaves us with the question: does CBD oil alone relieve migraines and other types of headaches or do you need to take THC-containing cannabis strains to get the pain-relieving benefits? Let’s look at the science of CBD first to find the answers.

Regardless of the type, headaches involve an overactivation of nerves connected to blood vessels in the brain (trigeminovascular system) [2, 7+].

Released vessel-widening proteins (CGRP and substance P) and messengers (NO) increase blood flow, which stimulates pain receptors on nerve cells in the head and neck. Headaches are a direct result of the stimulation, while drugs for headaches often block these receptors [2, 7+].

The endocannabinoid system is made up of two receptors: CB1 and CB2. Both THC from cannabis and the cannabinoids naturally produced by the body, such as anandamide, reduce pain by activating these receptors [8+, 9+, 10, 11].

CBD is different: it blocks rather than activates these receptors. However, it prevents anandamide from being broken down. Interestingly, a theory from the early 21st century associated migraines (and other chronic pain conditions) with low anandamide levels [12, 10, 13, 14, 15].

In fact, further studies revealed that people – and especially women – with migraines often have less anandamide in the spinal fluid and platelets [16, 17, 18].

The same was true in people with headaches from overusing painkillers; once they withdrew from the drugs, they had less anandamide breakdown and pain [19, 20].

People with chronic headaches have lower anandamide levels and higher CGRP and NO production. CB1 activation by anandamide and synthetic cannabinoids blocks the production of CGRP and NO, which prevents (trigeminovascular) nerve overstimulation and headaches [21, 22, 23, 24, 16].

CBD oil might work by increasing natural cannabinoids like anandamide, which are often low in people with migraines and headaches.

As hinted above, anandamide reduces migraines by activating CB1. In rats, blockers of the serotonin receptor 5HT(1B/1D) prevented anandamide from activating CB1. This receptor has a well-known role in relieving headaches and its activators (called triptans) are mainstream drugs for migraines [25, 26, 27].

CBD and anandamide can bind to a receptor involved in inflammatory pain (TRPV1). Its activation triggers the release of CGRP, which increases blood flow to the trigeminal nerves. This suggests that CBD may cause headaches [14, 32, 33, 34, 35].

However, repeated TRPV1 activation reduces sensitivity to pain. Indeed, a nose spray with the chili pepper compound capsaicin – which also activates this receptor – relieved migraines in a small trial on 8 people [14, 36+].

CBD oil may trigger migraines in the short-term and relieve them with repeated use.

Autoimmune diseases may trigger migraines and other types of headaches if they cause inflammation of the blood vessels in the brain. Indeed, conditions such as multiple sclerosis, lupus, Sjögren syndrome, and antiphospholipid syndrome are associated with frequent headaches [41+, 42+].

CBD may relieve headaches in people with these conditions through its strong anti-inflammatory activity. It reduces the production of pro-inflammatory messengers (such as IL-1beta, IL-6, TNF-alpha, IFN-gamma. NO, and prostaglandins) while increasing the levels of the anti-inflammatory cytokines IL-4 and IL-10 [43, 44, 45, 46, 47].

Alternatively, it may prevent the symptoms of autoimmune disorders by suppressing the immune response. For instance, CBD prevented T cells from multiplying and building up in the brains of mice with multiple sclerosis – while reducing the autoimmune-linked Th17 response [48, 49].

CBD oil may relieve headaches in people with autoimmune conditions like lupus by lowering the inflammatory and autoimmune response.

In a study on over 100 people with migraines using medicinal cannabis (with both CBD and THC), 85% reported reduced pain and migraine frequency [50].

In a clinical trial on 79 people with chronic migraines, a preparation with more CBD than THC prevented attacks as effectively as a migraine drug (amitriptyline). An additional dose during the attacks reduced pain. Similarly, 3 heavy cannabis smokers started having migraines after they stopped; one got relief from smoking again [51+, 52+].

THC may account for a great part of these effects. THC alone prevented migraine attacks and reduced pain in rats. In contrast, its overuse may have the opposite effect: high doses increased sensitivity to repeated nerve stimulation – a suspected migraine trigger [53, 54].

Taken together, there is no evidence that CBD oil improves migraines. Studies in rats even suggest that THC rather than CBD may be the cannabinoid responsible for the pain relief observed in people using cannabis preparations for migraines.

Extracts with both CBD and THC likely relieve migraines in moderation, though THC is probably responsible for this benefit.

Other Types of Headaches

In one report, recreational marijuana and synthetic THC (dronabinol) improved frequent cluster headaches in a teenager. The benefit was likely from THC, not CBD [56].

In a trial on 13 people with headaches from overusing painkillers, cannabis preparations reduced pain. However, the preparation with the highest THC content (oil) was more effective. In line with this, a synthetic THC compound (nabilone) reduced pain and the need for painkillers better than ibuprofen in another trial on 26 people [57, 58].

In the short term, THC and other CB1 activators also relieved headaches from painkillers in rats. However, their repeated use increased sensitivity to pain – meaning it might trigger migraines [54].

Both medical marijuana and a synthetic THC compound (dronabinol) relieved headaches in 2 women with high pressure in the brain (pseudotumor cerebri) [59+, 60].

A few clinical and animal studies suggest that CBD is possibly ineffective for cluster headaches and headaches from overusing painkillers. THC seems to be the only cannabinoid offering some pain relief, but the evidence is still limited.

There are no clinical trials testing CBD alone for headaches. Most of them used cannabis preparations with variable amounts of THC and CBD.

Most people with migraines prefer THC-rich cannabis strains. Plus, synthetic THC analogs were also effective. This suggests that migraine relief requires direct CB1 activation that only THC is likely to achieve. On the other hand, CBD may slightly help by boosting anandamide levels.

Because CBD is not approved for migraines or any other types of headaches, there is no official dose. There is no proven dose either because CBD alone hasn’t been tested in clinical trials. The only study evaluating a product higher in CBD than in THC (9% vs 0.4%) used a dose of 200 mg (supplying 18 mg CBD) per day. However, we can’t rule out the contribution of its THC content to the effects [51+].

We can additionally estimate dose based on the guidelines from manufacturers and users.

Natural health blogs and users prefer lower doses (15-25 mg/day). They generally recommend starting with a low dose and increasing it until noticing pain-relieving effects. It’s important to do this gradually, since high doses may trigger migraines and increase headache intensity [61].

In any case, don’t try CBD oil or any other unproven therapies for migraines and headaches without consulting your doctor beforehand. Discuss with your doctor if CBD oil may help in your case and what dose and delivery form may be better for you.

CBD oil comes in different forms. Your form of choice may depend on your type of headache [62+]:

Although migraine pain is not constant, slow-release CBD forms might be more effective (based on CBD’s interaction with the TRPV1 receptor). Acute CBD doses may trigger migraine attacks while repeated doses reduce pain perception.

CBD oil capsules and edibles are likely the best choice. You should probably take them daily, since only long-term use may prevent or reduce headaches.

In addition to choosing a CBD oil adjusted to your budget (you may want to calculate the price per mL or mg to compare different brands), you should also evaluate the product quality. Read here about how to choose the best CBD oil.

The most common headache type among CBD oil users was migraine, followed by tension headache, and headache from painkiller overuse or conditions such as fibromyalgia. Most of them were satisfied and reported good pain relief. In several cases, the users reported some added benefits such as improving sleep quality and curbing anxiety.

Some users complained that the oil didn’t work for them or that it made them drowsy and fatigued. CBD oil even caused headaches in some people taking it at high doses.

The majority of people with migraines use THC-rich cannabis strains, though some prefer CBD oil. No clinical studies have yet tested CBD oil alone for headaches or migraines.

Animal studies reveal that CBD oil may relieve headaches – but only in the long run and probably not as well as THC.

Sudden spikes in CBD, such as from vaping, may cause migraines. But taken long-term, CBD may reduce pain perception and prevent migraine auras. It mainly works by boosting your natural cannabinoid bliss molecules.

CBD oil may also be an option for people with migraines and headaches from autoimmune diseases like lupus and multiple sclerosis. In such cases, it likely helps by lowering brain inflammation and suppressing autoimmunity.

Go with capsules or edibles and take them every day for the best results.

What Are Lipopolysaccharides (LPS)?

Synaptic Plasticity: How It Works And Why It’s So Important