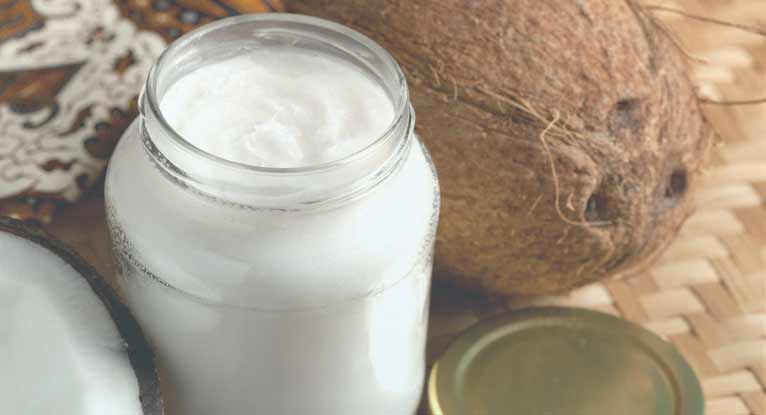 For many years, coconut oil was labeled as dangerous due to its high saturated fat content. However, now that people are coming to realize that saturated fat is not inherently bad, the health benefits of coconut oil are being re-examined. So far, the effects on inflammation, metabolism, and skin health are promising but require further investigation.

In this article, we explore the potential health benefits of coconut oil for the body, skin & hair and its controversial effects on heart health.

What is Coconut Oil?

Coconut Oil is the oil extracted from the “meat” inside the hard-shelled coconut (Cocos nucifera). Coconut oil is solid at room temperature and has a very long shelf life (six months at 75 °F) [1].

The majority of coconut oil (approx 65%) is composed of medium-chain triglycerides (MCTs), which are triglycerides and fatty acids with a carbon length chain of 6 – 12. MCTs are mostly comprised of lauric acid, which has a 12 carbon chain and therefore is almost considered a long-chain fatty acid.

Coconut oil is produced mostly in Asian countries and is widely used in the food and cosmetic industries [1].

MCTs from coconut oil are “thermogenic”; this means that consuming coconut oil may actually increase energy expenditure (fat burning), versus consuming the same amount of calories from other fats [2].

Coconut oil is 65% MCTs. A number of studies have explored fat loss and metabolic changes in response to MCT oil. In every one of these studies, MCT oil was found to increase metabolism and fat loss, compared to other fat sources [3, 4, 2, 5].

Similarly, another study found that after 7 days, individuals on a diet rich in MCTs from coconut oil and butter burned more fat and had a significantly higher resting metabolic rates than those consuming diets rich in beef tallow [6].

Subjects (n=20) who consumed 30ml of coconut oil per day lost an average of 1.1 inches from their waist circumference, but this effect was observed only in men [7].

In 40 women, consumption of coconut oil led to a greater decrease in waist circumference, compared with soybean oil [8].

It’s important to note that adding coconut oil on top of daily food intake instead of replacing another (saturated) fat source would likely have opposite effects on metabolism and weight control.

Women who consumed a high-fat diet based on coconut oil had less post-meal inflammation, especially when compared to the group on a diet high in unsaturated fatty acids [9].

Virgin coconut oil was found to be anti-inflammatory for artificially-induced ear and paw swelling in rats, as well as ulcerative colitis [10].

In a mouse study, the anti-inflammatory activity of virgin coconut oil was comparable to aspirin [11].

One way coconut oil kills candida is by disrupting the yeast’s plasma membranes [16].

Many disease-causing microbes, including potentially deadly ones like HIV and drug-resistant bacteria, are vulnerable to MCTs found in coconut oil [12].

Coconut oil is effective at reducing the levels of dangerous bacteria found in poultry [18].

MCTs found in coconut oil have also been shown to reduce the growth of certain species of Malassezia fungus. This fungus is very common in hospitals [19].

Coconut oil improves the absorption of fat-soluble vitamins (A, B, D, E, K) beta-carotene, CoQ10, minerals such as calcium and magnesium, and amino acids [20].

Patients with bile acid malabsorption do best when MCTs, as found in coconut oil, are their primary source of fat [23].

Similarly, those with pancreatic insufficiency respond well to foods rich in MCTs [24].

Individuals with liver disease are able to absorb the types of fats found in coconut oil better than other longer chain fatty acids [25].

One of the main constituents of coconut oil, lauric acid, is effective against the bacteria that cause acne (P. acnes) [28].

Coconut oil enhances the absorption of other topical treatments, such as Vitamin E and curcumin [29, 30].

In preliminary research, coconut oil was shown to be more effective at reducing hair damage than mineral or sunflower oil. It reduced protein loss for both undamaged and damaged hair. These benefits may be due to the high lauric acid content [31].

It may be such an effective hair treatment because, unlike mineral oil, it actually penetrates the shaft of the hair [31].

A spray containing coconut was a more effective method for killing head lice than conventional treatments in 100 study subjects [32].

Coconut oil, when used as a mouthwash (oil pulling), reduces the amount of plaque-forming bacteria in the mouth, with the effects comparable to those of chlorhexidine [33].

In a similar study, 60 individuals aged 16-18 years with gum inflammation were instructed to do oil pulling with coconut oil for 30 days. At the end of the study, both inflammation and plaque markers were significantly decreased [34].

In one trial, 60 women undergoing chemotherapy for breast cancer consumed 20ml of coconut oil per day. This resulted in better quality of life, fatigue, sleep, loss of appetite, sexual function and body image [35].

For decades, coconut oil was demonized for its high saturated fat content. However, there is no concrete link between the consumption of saturated fat and heart disease [36, 37].

A natural experiment that helps prove coconut oil’s safety has been taking place in many tropical countries for decades: Many Polynesian populations consume high percentages of calories from coconut oil (up to 60%), and yet have low levels of heart disease [38].

Current evidence supports the idea that the diseased heart is energy deficient. Coconut oil, with its rich source of ketogenic MCTs, might offer an important alternative fuel source for the heart [40].

On the other hand, there’s solid evidence to suggest that partly replacing saturated fat with polyunsaturated fatty acid significantly reduces the risk of heart disease [41].

According to preliminary research, coconut oil may increase HDL (good cholesterol) more than safflower and other vegetable oils [42, 8].

In humans, a diet rich in coconut oil raised HDL but also total and LDL cholesterol more than the beef fat and safflower oil; it caused less of an increase in triglycerides than a diet rich in beef fat [43].

After 40 days on a diet rich in coconut oil, rats showed improved lipid profiles. This included: reduced total cholesterol, triglycerides, phospholipids, LDL, and VLDL cholesterol levels and increased HDL cholesterol. The authors suggested these changes might be due to the polyphenol content of coconut oil [44].

A diet high in coconut milk was also able to decrease LDL and increase HDL in animal studies [46, 47].

Further research will hopefully clear out the effects of different fat types and sources on heart health. At this point, there’s no solid evidence that coconut oil in moderate amounts contributes to heart disease. It may even be more beneficial than other types of saturated fat.

The following health effects have been observed in animal and cell-based studied only; they should not be interpreted as supportive of actual health benefits in humans until more research is done.

After 21 days on a diet rich in virgin coconut oil, rats had reduced blood glucose levels [49].

MCTs, which are abundant in coconut oil, help maintain insulin sensitivity and blood glucose control, according to preclinical and clinical studies. Still, this doesn’t mean coconut oil would have the same effect in humans [50, 51].

One study gave coconut oil polyphenols to arthritic rats. These rats showed reduced levels of CRP (an inflammatory marker) and white blood cells, and also reduced the expression of inflammatory genes such as COX-2, iNOS, TNF-α and IL-6 [53].

Oxidative stress and free radicals have been associated with the onset of osteoporosis (bone disease). Rats given virgin coconut oil show improved bone health. This is probably because of virgin coconut oil’s high antioxidant content [54].

Another study found that coconut oil prevented lipid peroxidation and increased the antioxidant enzymes in rats with osteoporosis [55].