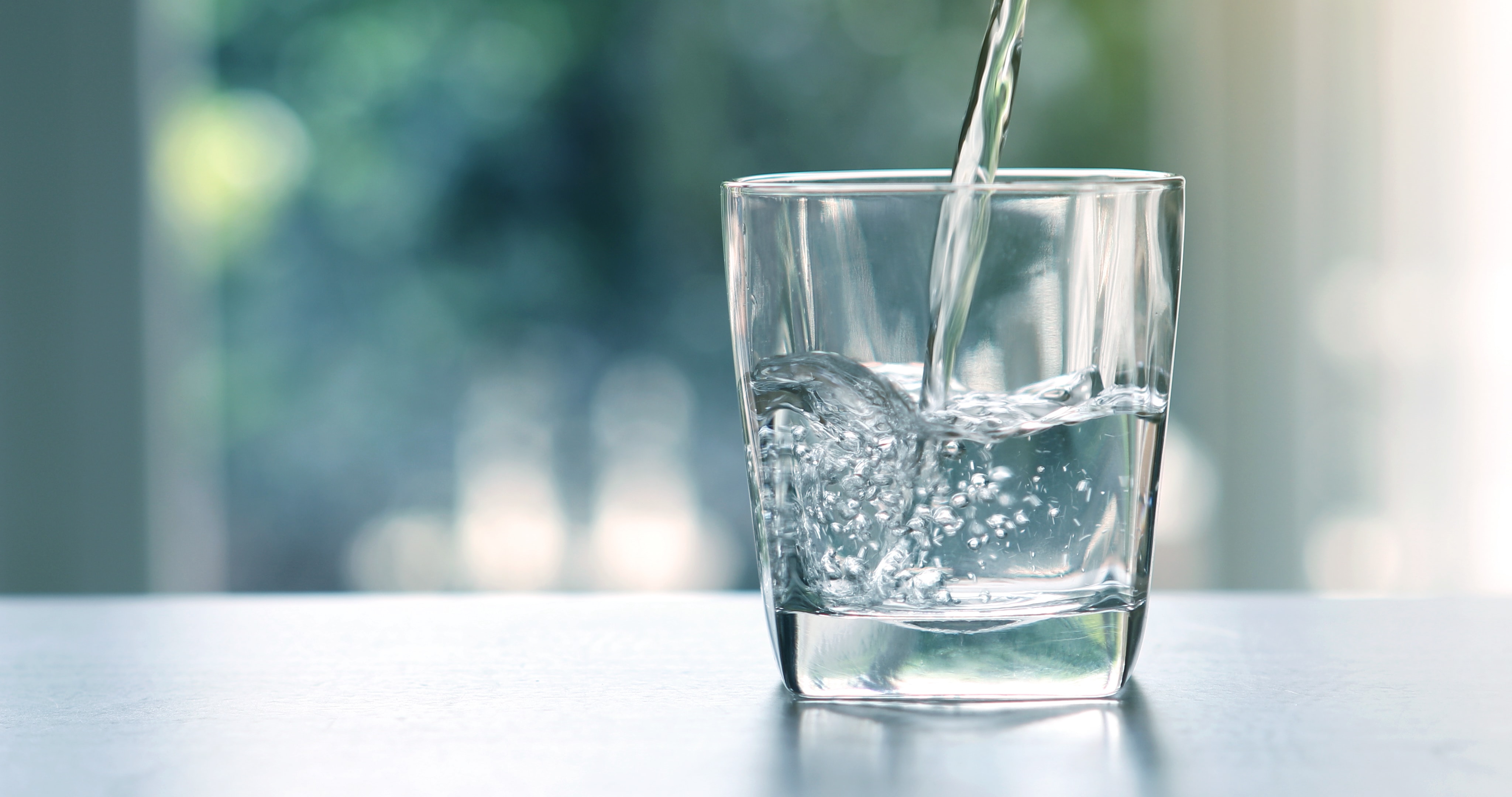 Some researchers claim they’ve found a way to combat diseases and enable space travel using… “light water”! You couldn’t tell the difference between tap water and deuterium-depleted water, but the other one is promoted to protect against cancer, radiation, and more. In the absence of solid evidence, however, DDW looks like just another fad.

What is Deuterium-Depleted Water?

A water molecule contains 2 atoms of hydrogen and 1 atom of oxygen (H2O).

Hydrogen exists in different forms, called isotopes, depending on the number of neutrons – neutral particles – in its core. The isotope without neutrons (H – protium) is the most abundant, but water molecules also contain a small amount of deuterium (D or hydrogen-2).

The natural deuterium levels in water depend on different factors such as [1, 2]:

A standard concentration of deuterium in water is 150 ppm (parts per million) or 1 atom of deuterium per 6400 atoms of regular hydrogen. In other words, each quart (or liter) of water contains only a few drops with deuterium [3, 4].

In animal and cell-based studies, scientists have examined the potential positive effects of deuterium-depleted water on [4, 7, 8, 9]:

Based on studies on bacteria, it might also work by triggering hormesis – acting as a mild stressor that increases resilience to bigger stressors and enhances performance. This is still largely speculative, though, as it relies on the response of bacteria, not humans [13].

Manufacturers and retailers claim deuterium-depleted water can treat diabetes and high blood pressure, enhance sports performance and strength, and combat the effects of stress and aging. However, solid clinical evidence supports none of these claims.

Research on deuterium-depleted water (DDW) is scarce. Most health benefits are limited to a couple of animal or cell studies, and we can’t draw solid conclusions from them.

Clinical trials about the anticancer effects of DDW come with major caveats, such as [14, 5, 15+]:

One team of Hungarian doctors have conducted the majority of clinical and animal trials on DDW and cancer. Some of them are involved in DDW commercial production and marketing, which points to a massive conflict of interest [5, 15, 14, 4, 16].

Although clinical studies on potential anticancer effects of DDW exist, many of them suffer from glaring flaws. These studies should guide further investigation but shouldn’t be interpreted as supportive of the anticancer effects until more research is done. Deuterium-depleted water isn’t approved for cancer prevention or treatment.

In a clinical study of 44 patients with prostate cancer, the addition of deuterium-depleted water (DDW) to standard treatment [15]:

The same study observed 91 prostate cancer patients (46 with metastases) who consumed deuterium-depleted water. Their average survival time was 11 years, but, due to the lack of a placebo control, it’s unsure whether DDW contributed to the results [15].

Although the above study had flaws, it did include a control group that drank equal amounts of regular water. Both groups also received the same conventional treatment.

In another clinical trial, 129 patients with lung cancer consumed deuterium-depleted water along with their conventional treatment (chemo and radiation). On average, they survived 2-4 longer than expected, especially female patients (74 months vs. 26 months) [5].

However, this study did not include a control group that drank regular water. Strong placebo effects are a possibility.

An observational study followed 232 women with breast cancer who replaced “normal” water with deuterium-drinking water (DDW) for at least 3 months. Patients in the early stage survived 18 years on average, but most patients with metastases didn’t reach a 5-year survival. Those who took at least 2 rounds of DDW treatment (>6 months) survived the longest (~24 years) [14].

According to one review of clinical trials, drinking deuterium-depleted water could [6]:

All of the above studies have small samples and other serious flaws we already discussed.

One review of animal studies revealed that deuterium-depleted water (DDW) could kill cancer cells and fight different types of cancer in dogs, cats, and lab animals [4].

In studies on mice with various types of cancer, deuterium-depleted water [5, 16, 17] :

In test tubes, deuterium-depleted water also prevented the growth of different cancer cells. However, these findings have no clinical value, and they don’t imply actual anticancer effects in the human body [4, 18, 17, 19, 20, 21].

The above findings point to the anticancer potential of deuterium-depleted water, but they are far from conclusive. Well-designed clinical trials should examine this further.

No clinical evidence supports the use of DDW for any of the conditions listed in this section. Below is a summary of the existing animal and cell-based research, which should guide further investigational efforts. However, the studies listed below should not be interpreted as supportive of any health benefit.

Deuterium-depleted water (DDW) was able to protect mice from the damaging effects of radiation and increase their chance of survival [22].

Another study on mice confirmed this effect, especially in combination with polyphenols [23].

Any astronauts venturing to Mars would be exposed to extreme levels of radiation in the flight, and high deuterium levels on the planet. Some scientists think that ensuring a deuterium-depleted water supply may play a crucial role in protecting the crews from cancer in future space missions to Mars [25, 26].

Animal studies hint the ability of deuterium-depleted water (DDW) to protect and stimulate the liver. In animals, scientists researched the potential of DDW to [27, 28, 9, 29]:

In a study on mice, deuterium-depleted water (DDW) reduced signs of depression and stress. Interestingly, it stimulated the brain’s memory center and increased wakefulness. These effects were similar to SSRI (antidepressant) drugs [30].

In healthy rats, researchers tested the ability of DDW to [31]:

In rats with high blood pressure, however, it only slightly increased insulin production. More research is needed to clarify these effects.

Keep in mind that the safety profile of deuterium-depleted water is relatively unknown, given the lack of well-designed clinical studies. The list of side effects below is not a definite one, and you should consult your doctor about other potential side effects, based on your health condition and possible drug or supplement interactions.

In clinical trials, deuterium-depleted water (DDW) had no major side effects. Out of 44 patients with prostate cancer, one patient (≈2%) experienced nausea and weakness from drinking it [6, 15].

However, in one cell study, deuterium-depleted was toxic to human stem cells in the long run. This study confirmed that the best way to store stem cells is an environment with typical deuterium levels [32].

Studies haven’t evaluated the safety of deuterium-depleted water in childhood, pregnancy, and lactation. These sensitive groups should stay on the safe side and avoid it.

Deuterium-depleted water has not been approved by the FDA for medical use. In general, regulatory bodies aren’t assuring the quality, safety, and efficacy of supplements and similar dietary products. Speak with your doctor before taking DDW..

Only a handful of brands manufacture and distribute deuterium-depleted water. It’s available in 0.5-1.5L bottles with different deuterium concentrations (25-125 ppm). Prices range from $4 to $20 per liter, with lower concentrations of deuterium being more expensive.

The below doses used in clinical trials may not apply to you personally. If your doctor suggests using deuterium-depleted water, work with them to find the optimal dosage according to your health condition and other factors.

In clinical trials, cancer patients replaced their daily water intake with deuterium-depleted water (DDW). Doctors calculated the exact dosage depending on patients’ body weight and the concentration of deuterium in DDW [6, 15+, 14].

Mass production requires complex distillation, electrical, or chemical reactions. Up to date, all methods are expensive, consume much energy, and pollute the environment. The so-called Girdler Sulfide (GS) process is the most efficient, but it uses toxic chemicals.

A team of Chinese scientists reported a new energy-efficient method that may improve the production of deuterium-depleted water in the future [33].

Can You Make Your Own?

Deuterium-depleted water (DDW) boils and freezes at slightly higher temperatures than regular water. In theory, you could use this feature to make DDW with partial distillation or freezing: water with deuterium would evaporate slower or freeze faster [1].

Given that 1 liter of tap water contains only a few drops with deuterium, it’s practically impossible to separate it and make DDW on a small scale.

A couple of clinical trials have shown the anticancer potential of DDW, but they all had serious design flaws. There’s insufficient evidence for liver protection, cognitive and mood support, heart disease, and detox. In Hungary, veterinarians use it as a complementary cancer treatment for pets.

There’s no clinical evidence to support any of the potential uses and marketing claims about DDW.