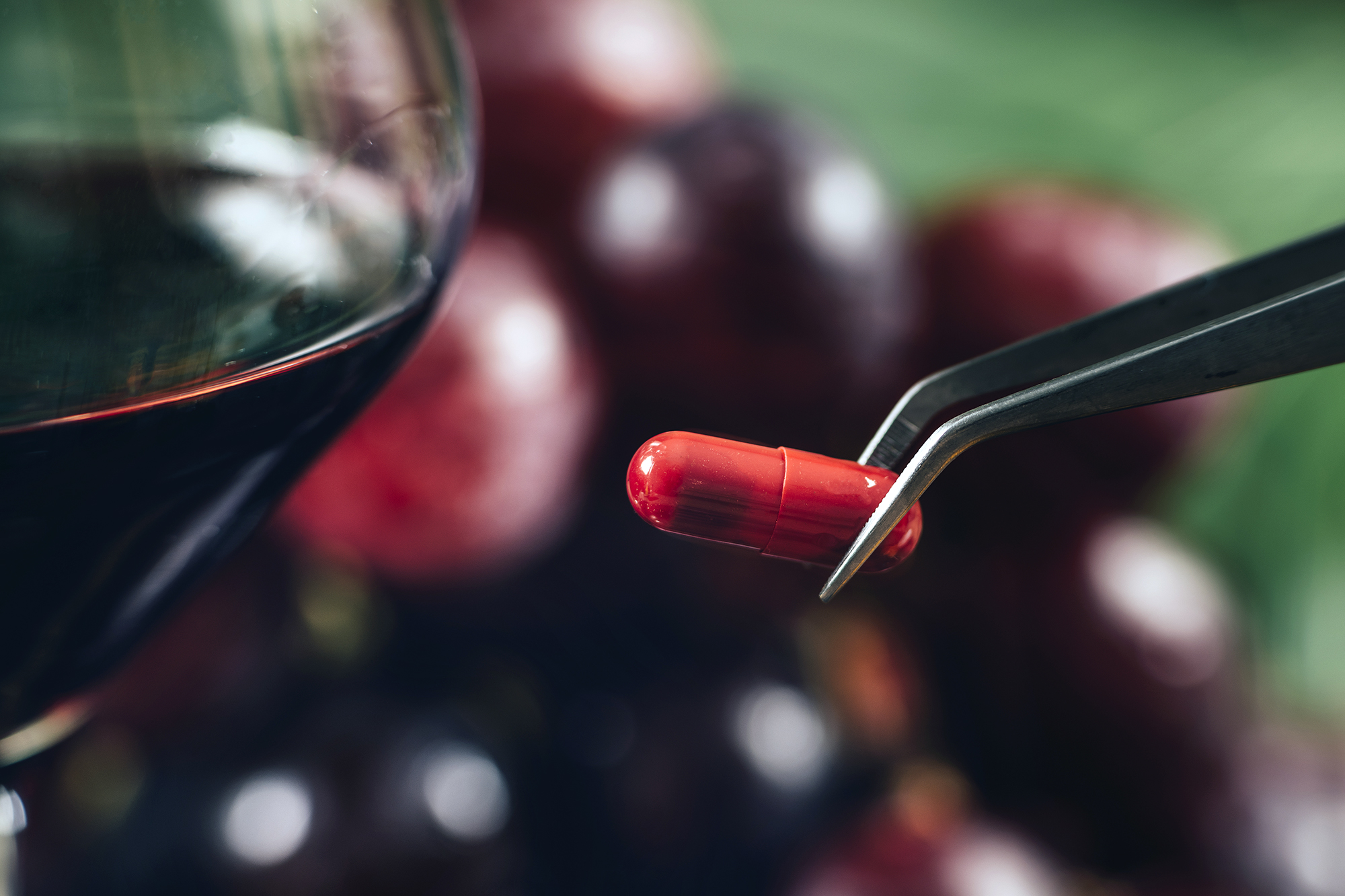 Resveratrol is the polyphenol everyone has heard of because of the “French paradox,” hoping that drinking a bit of wine every day may indeed be healthy. However, its bioavailability is poor and supplements are unlikely to work the way they’re claimed to. Read this science-based review to learn more.

Resveratrol is a small polyphenol that came to scientific attention during the 1990s. Since then, it has been hyped by supplement manufacturers and news outlets alike.

This compound has been nicknamed “the French Paradox in a bottle” since resveratrol is found in red wine that the French like to consume it in not-so-moderate quantities alongside a diet high in saturated fats. Yet, the French have very low rates of heart disease [1].

While the resveratrol in red wine is unlikely to fully account for the paradox, some scientists say it may be a contributing factor [1].

Resveratrol is high in grape skin, as grapes produce resveratrol in defense against toxins and parasites. It is also found in various berries, peanuts, soy, and “Itadori tea” made from Japanese Knotweed [2].

Limited studies have explored its antioxidant, anti-inflammatory, anti-aging, and phytoestrogen activity. Resveratrol does hold some potential for improving chronic diseases. Researchers are also exploring its ability to mimic the effects of caloric restriction in animals, which might affect lifespan [3, 1].

Clinical studies suggest that resveratrol is likely safe. However, no long-term studies have been done with humans [1].

Resveratrol also has one major flaw: poor bioavailability. Resveratrol is absorbed into the blood from the gut a bit better than other polyphenols (such as quercetin). But it gets broken down fast, leaving little free resveratrol in the bloodstream. Scientists say that this is one reason why a lot of the findings from animals and cells might not apply to humans [1].

Additionally, resveratrol supplements have not been approved by the FDA for medical use. Supplements generally lack solid clinical research. Regulations set manufacturing standards for them but don’t guarantee that they’re safe or effective. Speak with your doctor before supplementing.

Resveratrol is a polyphenol found mostly in grape skin and red wine. Its major flaw is poor bioavailability, which limits its potential health benefits.

Note: Wine may not be an option for people with autoimmune and histamine issues. Consult your doctor if you are unsure whether drinking a glass of wine per day is safe for you.

Resveratrol is available in many forms as a supplement for oral use:

Most studies concluded that trans-resveratrol is the more active form of resveratrol (compared to cis-resveratrol). Make sure to check the supplement label.

Resveratrol has also been formulated into various products for skincare or topical use. The following are available:

Resveratrol is often combined with other antioxidants or herbs in pain-relief creams or skincare products.

Hormesis is the concept of introducing small dose, acute “stress” to the body, which will elicit a reaction that preps it for future stressors that are even stronger. Being prepped, the body can shift into a state of higher performance. Essentially, what doesn’t harm you too much makes you stronger. With philosophy, it’s crucial not to fall into the trap of potentially dangerous megadoses.

For example, at low doses resveratrol enhanced ulcer healing and protects the blood vessels. But in high doses, it can delay healing and cause heart damage. The doses used in cellular studies are way higher than those found even in very high-dose supplements [5].

Out of the resveratrol you take, very little of it stays in the bloodstream in the free form. This is because resveratrol binds to proteins or lipoproteins in the blood. Liver enzymes also quickly catch free resveratrol and modify it via CYP450 enzymes (sulfation and glucuronidation) [6].

Based on animal findings, tissues could still take up and store resveratrol, even though its free form blood levels are very low. Resveratrol is a relatively small molecule and should be able to cross into the brain. But whether humans can store resveratrol in any tissues, including the brain, is still unknown [6].

Some ways to potentially increase the bioavailability of resveratrol include [6]:

Scientists are also working on modifying resveratrol to increase its ability to cross the blood-brain barrier. The studies are still limited to animals, but Piceatannol is one promising resveratrol derivative for combating Alzheimer’s disease [6].

The following resveratrol synergies were explored in studies:

How much resveratrol is there in wine?

Typically, the total concentration of resveratrol is:

Red wine has six times more trans-resveratrol than white wine; white wine contains high levels of cis-resveratrol, which has been less studied and is probably less active. Red wine is extracted without removing the grape skin, which explains its higher resveratrol content. White wine is fermented after the resveratrol-rich grape skin is removed [6].

The richest source of resveratrol comes from the red grapes of Spain (1.89 mg per five-ounce glass) [2].

“Itadori tea,” made from Japanese Knotweed, is a great source of resveratrol. Itadori means “well-being” in Japanese. This tea may be suitable for people who want to stick to food sources but don’t tolerate red wine (or shouldn’t drink it due to health issues) [2].

Other food sources of resveratrol include dark chocolate, various berries, soy, and raw or boiled peanuts [6].

The amount of resveratrol in most foods is probably too low to expect specific health benefits. For example:

Resveratrol taken at up to 500 mg/day was well tolerated in clinical studies on healthy people [17].

High doses of highly bioavailable resveratrol (amounting to 5 g/day) given to cancer patients didn’t cause any serious side effects, but some patients experienced nausea and stomach upset [18, 19].

Resveratrol should be avoided in children due to the lack of proper safety data.

It has been suggested that resveratrol is beneficial in pregnancy for balancing metabolism and prenatal health. No clinical studies investigated resveratrol in pregnant women, though.

Taking resveratrol through food is most likely safe, but supplements should be avoided due to the lack of safety data.

In one study on monkeys who were fed a resveratrol-rich diet throughout pregnancy, resveratrol has both good and bad effects [20]:

Overall, it may be harmful to the baby. Its effects on the pancreas of the fetus are a serious cause of concern.

Resveratrol is generally considered safe in dogs for the same health benefits mentioned here that apply to people.

However, studies on dogs are virtually non-existent. It’s well-known that humans can tolerate some compounds that are toxic for dogs, such substances other than resveratrol found in grapes.

With increased interest and popularity of resveratrol as a supplement for humans, its use has extended to pets. Manufacturers created analogous resveratrol supplements for dogs and cats. Resveratrol is also added to special dog food for its antioxidant and longevity-promoting effects.

We advise caution if using resveratrol for your dog (or cat) until more studies confirm it’s safe.

In one study, resveratrol added to blood taken from dogs increased inflammatory cytokines and decreased anti-inflammatory defense. The dosage used in this cellular study may have been higher than what can be accomplished with typical oral doses but still raises safety concerns [21].

Resveratrol may reduce iron absorption and/or blood levels, which could potentially worsen anemia.

Resveratrol turns on genes that code for an important protein involved in iron metabolism (hepcidin), which may reduce iron absorption. On the other hand, resveratrol’s effect on iron metabolism may be beneficial in cases of iron overload [22, 23, 24].

Resveratrol is a polyphenol found mostly in grape skin and red wine. Some berries, legumes, and “Itadori tea” (made from Japanese Knotweed) also contain it.

This small compound was initially popularized for promoting heart health. It was thought to be responsible for the “French paradox,” which later clinical trials debunked.

Blood Tests
4.3
15
Hidden Causes of High or Low Blood Urea Nitrogen (BUN)
Science
8
All About Serotonin: What It Does & Potential Ways To Increase It
Blood Tests
0
What is Carbon Dioxide (CO2)? Blood Tests & Normal Levels