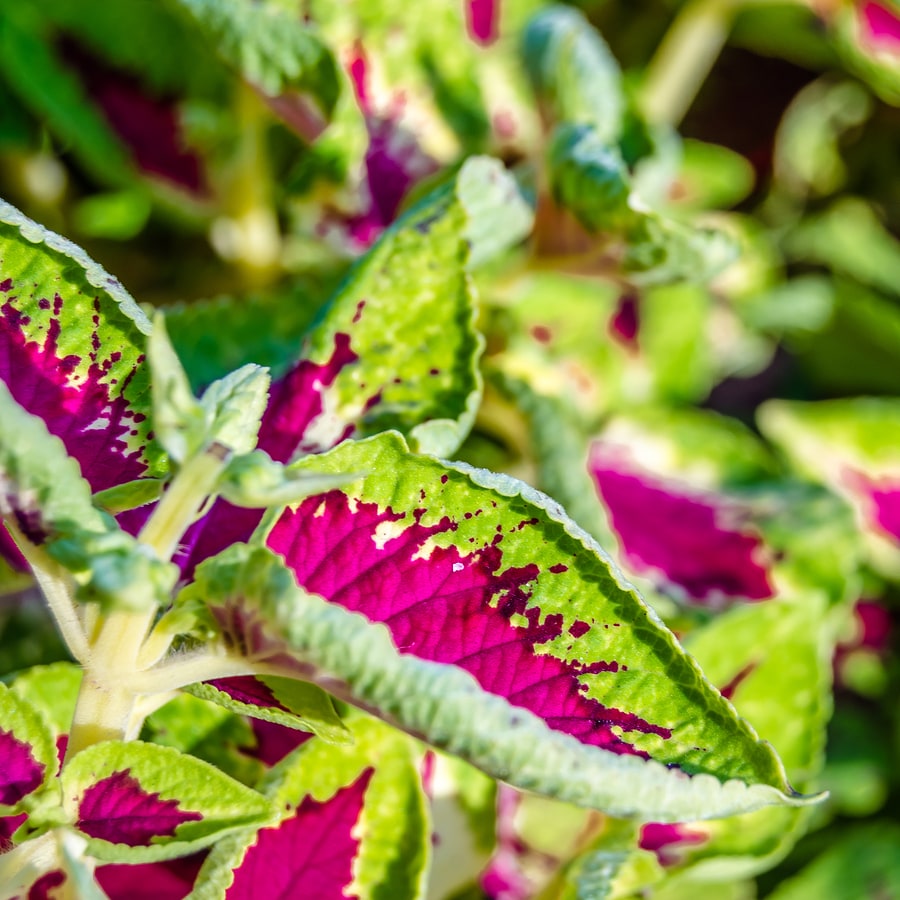 Forskolin is a diterpene produced by members of the mint family. Apart from being widely used as a weight-loss supplement, its potential benefits include improving glaucoma, improving blood flow, and preventing asthma attacks. Read below to learn more about this and other potential health benefits of forskolin and its derivatives.

Forskolin is a popular supplement and research tool that entered medical practice from Ayurvedic medicine. It is obtained from the dried root of an Indian plant known as Plectranthus barbatus or Coleus forskohlii [1, 2].

Wider-spectrum extracts such as teas and powders are also used [3, 4, 5].

How Does Forskolin Work?

Forskolin and its analogs all have the ability to activate adenylate cyclase, which produces cyclic adenosine monophosphate (cAMP) [9].

Forskolin also influences a number of processes independent of cAMP that are not fully understood [10, 11].

Why Is cAMP So Important?

Cyclic adenosine monophosphate or cAMP is a molecule derived from adenosine – a nucleotide that is also a part of DNA and RNA [12].

It activates several proteins, including protein kinase A, exchange protein activated by cAMP (Epac), and AMP-activated protein kinase (AMPKA). Through these proteins, cAMP determines the reaction of the cells to hormones and maintains energy balance [13, 14].

Both Coleus forskohlii extract and pure forskolin supplement have been investigated regarding their potential to fight obesity and weight gain.

In one clinical trial on 30 overweight and obese people, Coleus forskohlii (together with a low-calorie diet) reduced weight gain, insulin resistance, and blood cholesterol (by increasing HDL). This suggests that the intervention reduced the risk of metabolic syndrome [5].

Another trial on 30 obese men found a decrease in body fat, increased testosterone levels, and improved bone structure after forskolin administration. However, a trial on 32 men found that the fat-burning effect of forskolin was lower in middle-aged compared to young men [15, 16].

In another trial on 23 overweight women, C. forskohlii extract did not cause weight-loss directly, but prevented weight gain and did not have the side effects of other weight-loss supplements  [17].

Overweight women applying a cream with forskolin (both alone and in combination with yohimbine and aminophylline) on their thighs experienced local fat loss (measured as reduced thigh girth) in a small trial on 28 women. Similarly, a slimming product with forskolin and other compounds (tetrahydroxypropyl ethylenediamine, caffeine, carnitine, and retinol) reduced circumference measurement and improved tonicity in a trial on 78 women [18, 19].

On the other hand, cAMP may cause obesity by other mechanisms. It blocks the production of leptin (a hormone that suppresses appetite) and activates a brain protein called CREB, whose absence reduced energy expenditure and caused obesity in mice [24, 25].

Although limited, the evidence suggests that forskolin may help with weight loss. However, keep in mind that other measures such as doing more exercise and changing your diet may be more effective. Discuss with your doctor if forskolin may be helpful in your case and carefully follow your doctor’s instructions.

Glaucoma is the damage of the eye nerve that may lead to blindness, often due by abnormally high pressure in the eye. The treatment normally starts with prescription eye-drop medications (prostaglandins, beta-blockers, alpha-adrenergic agonists, carbonic anhydrase inhibitors, rho kinase inhibitors, miotic or cholinergic agents) to reduce the production of fluid in the eye and promote its outflow. Severe cases may require laser therapy and surgery.

Soluble adenylyl cyclase, an enzyme directly making cAMP, is active in different parts of the eye and plays an important role in their function. Importantly, it reduces pressure in the eyes by lowering fluid inflow. By activating this enzyme, forskolin eye drops reduced fluid pressure in the eyes of rabbits, monkeys, and humans [26, 27, 28, 29, 30, 31, 32, 33].

In 2 clinical trials on over 150 people with glaucoma, the combination of oral forskolin and rutin (as an add-on to conventional drugs) lowered blood pressure in the eyes. The combination was similarly effective to prevent eye pressure after surgery in a small trial on 10 people [34, 35, 36, 37].

Food supplements containing forskolin (together with homotaurine, L-carnosine, and folic acid) reduced the fluid pressure inside the eye and improved eye nerve activity in a clinical trial on 22 people with glaucoma. Similarly, injections with the same compounds prevented nerve cell death in rats with injuries in the eye blood vessels [38, 39].

All in all, limited evidence suggests that forskolin may reduce fluid eye pressure in people with glaucoma. Because there are more effective drugs to improve this condition, your doctor may only suggest forskolin as an add-on to conventional medication or if these drugs don’t work in your case.

Oral forskolin was more effective than an asthma drug (sodium cromoglycate) and as effective as another one (beclomethasone) at preventing asthma attacks in two clinical trials on 100 people with persistent asthma [40, 41].

Injected colforsin daropate, a water-soluble forskolin derivative, prevented the tightening of the airways caused by a drug in a clinical trial on 36 healthy volunteers, suggesting its potential to prevent asthma attacks faster than oral forskolin [6].

Although the results are promising, only 3 small trials back the use of forskolin to prevent asthma attacks. More clinical trials on larger populations are required.

Forskolin can increase blood flow by relaxing the muscles in the blood vessels. In a small trial on 21 elderly people, oral Coleus forskohlii extract lowered blood pressure through this mechanism [42].

In a small trial on 31 people with erectile dysfunction and a study in rabbits, injected forskolin improved the condition by increasing blood flow into the penis [43].

Both forskolin and its derivative NKH477 increased blood flow in animal studies [44, 45].

Similarly, it reduced airway tightening caused by tracheal intubation in 46 people. A forskolin derivative (NKH477) was similarly effective in Guinea pigs when injected or inhaled before surgery [49, 50].

Pretreatment of sheep before surgery with forskolin had similar effects. In addition, coating synthetic blood vessel grafts with forskolin prevented their rejection by the immune system [51, 52].

Both forskolin and colforsin daropate improved blood flow into the kidney in dogs and rats, which prevents complications caused by both narcotics and drugs taken for heart failure [53, 54].

Similarly, NKH477 reversed heart failure caused by narcotic drugs used in surgery, such as pentobarbital, propranolol or verapamil, in dogs [55].

Again, the evidence is insufficient to support the use of forskolin in the prevention of surgical complications. Larger, more robust clinical trials are needed.

No clinical evidence supports the use of forskolin for any of the conditions listed in this section. Below is a summary of the existing animal and cell-based research, which should guide further investigational efforts. However, the studies listed should not be interpreted as supportive of any health benefit.

Forskolin and C. forskohlii extract are often used for skin treatments, although they have only been tested in animal and cell-based studies.

Forskolin stimulated wound healing by promoting the migration of skin cells to the site of the wound [57].

Application of forskolin on artificial skin tissue repaired DNA damage caused by UV light and prevented skin cell death. Alternatively, it may protect by making the skin thicker and more resistant to this radiation [58, 59].

Comparison of cultured skin treatment with pure forskolin and C. forskohlii extract showed that forskolin penetrated the skin faster when applied as plant extract, possibly due to synergistic effects with other compounds [61].

Forskolin blocks the movement of Ca2+ into muscle cells, thus preventing contraction of muscle cells in the heart and blood vessels. In heart tissue collected from people with irregular heart rate (arrhythmia), forskolin relaxed the muscles and reduced arrhythmia [62, 63].

The forskolin derivative NKH477 reversed damage to the heart in rats with chronic heart failure after a heart attack. In dogs, it prevented heart damage caused by sedative medication [64, 55].

In heart cells, forskolin reversed some defects associated with a type of heart failure called mitral deficiency, which may improve outcomes after heart surgery for this condition [65].

Forskolin derivatives NKH77 and DMAPD increase the level of cAMP in heart cells better than forskolin itself, possibly making them more promising for heart therapy [55].

Forskolin may have some role in treating conditions associated with diabetes. As mentioned above, forskolin improves cellular insulin response. It also decreases blood sugar levels in rats [5, 66].

Forskolin, in combination with cilostamide, improved the development of human egg cells [69].

In rat egg cells, forskolin increased the rate of division and maturation [70].

In pig egg cells, forskolin delayed the development of egg cells and increased the production of the hormone progesterone [71].

Low forskolin doses increased testosterone and cAMP production by testes cells. However, these processes were blocked at high doses [72, 10].

Also, forskolin increases cAMP buildup in the tail of sperm cells, making them more likely to fertilize an egg [73].

Keep in mind that the safety profile of forskolin is relatively unknown, given the lack of well-designed clinical studies. The list of side effects below is not a definite one, and you should consult your doctor about other potential side effects based on your health condition and possible drug or supplement interactions.

Because it increased the levels of cytochrome P450 in rats, forskolin may reduce the effectiveness of drugs broken down by this enzyme such as warfarin (blood thinner) and tolbutamide (antidiabetic). Ask your doctor about potential interactions of forskolin with any medication and supplements that you are taking [78, 79].

8 Uses of Omeprazole (Prilosec) & Side Effects