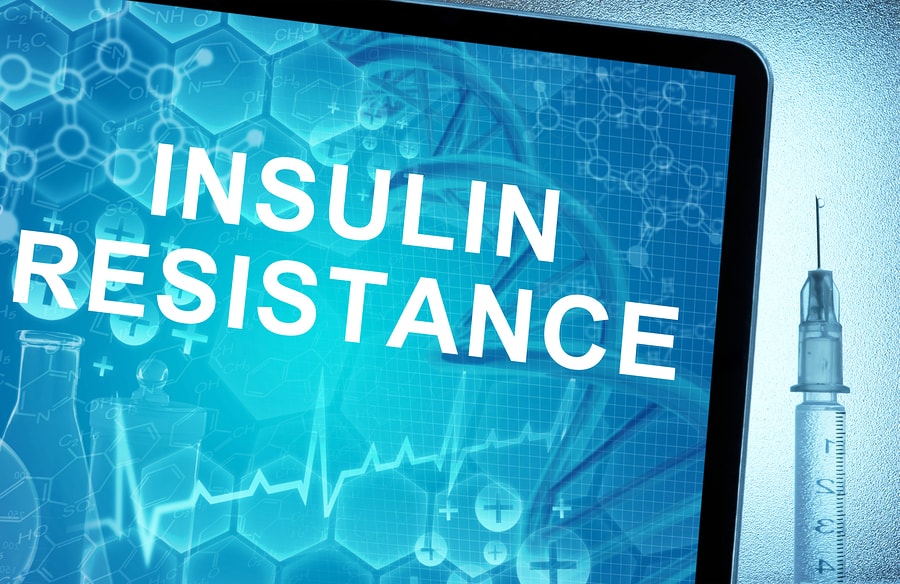 Insulin resistance disrupts the body’s ability to effectively regulate sugar levels. It is one of the symptoms of metabolic syndrome and an early stage in developing type 2 diabetes. Read on to uncover five factors that may help decrease insulin resistance.

You may hear doctors say that the problem isn’t insulin, but rather insulin resistance. Insulin resistance is when the body is using more insulin than normal to keep blood sugar in balance.

Research suggests that in most “healthy” people, insulin resistance is mainly caused by two factors: overeating and lack of physical activity. Eating too much and being inactive can cause a buildup of fat in the liver and muscles, which makes these tissues less responsive to insulin [1].

Other causes of insulin resistance include stress, pregnancy, and various disorders and diseases.

Scientists think that, in insulin resistance, the brain will not get the message that insulin is trying hard to convey (that blood sugar levels are high) [2].

In line with this theory, insulin resistance is thought to promote hunger. As people eat, insulin is released. But the body senses as if it needs more food despite, bypassing insulin’s satiety hormone action. Hence why obesity has been linked to brain insulin resistance, though more human research is needed to verify this [2].

Researchers have proposed a correlation between insulin resistance and fat accumulation in the liver. In a literature review, insulin resistance was suggested to be directly correlated to non-alcoholic fatty liver disease [3, 4].

In diabetics, insulin resistance was shown to inhibit glycogen synthesis and uptake [6]. Also, waist and thigh circumference (predictors of insulin resistance) were negatively correlated with the percentage of type 1 muscle fibers [7].

In prediabetic subjects, insulin resistance was linked to atherogenic changes [8].

TNF-a levels were linked to the development of insulin resistance in obese patients. TNF-a was suggested to inhibit the ability of insulin to exert its effects on the insulin receptor [9].

Another study suggested a correlation between insulin resistance and chronic kidney disease pathology [11].

The research outlined here should guide further investigational efforts. However, it should not be interpreted as supportive of any health effects in people.

IKKB (a mediator of inflammatory cytokine Nf-kb production) has been linked to the development of insulin resistance in lab animals [14].

Scientists are investigating the following mechanisms in cells and lab animals:

These pathways have yet to be explored in humans.

Factors that May Decrease Insulin Resistance

If you’re struggling with insulin resistance, it’s important to schedule a visit with your doctor.

He or she should diagnose, treat, and monitor any underlying conditions causing your insulin resistance.

Your doctor may also order some blood tests. HOMA-IR is one important measure of insulin resistance. It is not measured directly in the blood but is calculated from your fasting blood sugar and insulin levels.

You may try the complementary approaches listed below if you and your doctor determine that they could be appropriate for your metabolic health.

Read through and discuss the strategies listed here with your doctor. Remember that none of them should ever be done in place of what your doctor recommends or prescribes.

The best approach to decreasing insulin resistance is to change your lifestyle. The two most important steps you can take are [19, 1]:

Weight loss in people who are overweight has been shown to improve insulin sensitivity [20].

If you have extra pounds, the single most important thing you can do is lose weight by eating less, i.e. consuming fewer calories [21, 22, 23]!

According to a meta-analysis of 11 studies with 846 diabetics, exercise was effective in decreasing insulin levels and lowering insulin resistance [24].

But does the type of activity matter?

According to a study in 1229 people, leisure-time physical activity is beneficial for reducing markers of insulin resistance, while occupational and household physical activities are not. Strenuous eccentric exercises like running downhill do more harm than good [25].

In two studies with over 11k people in total, those with higher dietary fiber intake had lower markers of insulin resistance (HOMA-IR) [33, 34].

In another study with almost 5,5k people, those who ate more whole grains had lower insulin resistance, less inflammation, and lower chances of getting diabetes [35].

Get enough good-quality sleep. Studies suggest this may support insulin and blood sugar balance. In a study of 245 high school students, shorter sleep was associated with higher HOMA-IR–the main marker of insulin resistance [37].

Similarly, in 280 adolescents, poor sleep quality was related to a greater HOMA-IR [38].

Take time to deal with stress in your life. Research suggests that any activity that helps you unwind and decreases your cortisol levels may have a beneficial effect on your insulin levels – whether it’s a relaxation technique, meditation, yoga, exercise, a hobby, or simply having fun.

Several studies found that relaxation techniques such as yoga and meditation may have beneficial effects on insulin resistance [39, 40, 41].

However, proper evidence is lacking to rate their effectiveness and safety in people with insulin resistance.

Dietary supplements have not been approved by the FDA for medical use. Supplements generally lack solid clinical research. Regulations set manufacturing standards for them but don’t guarantee that they’re safe or effective.

Speak with your doctor before supplementing.

Some genetic variations have been linked with Insulin resistance [82]. Go to SelfDecode to explore your own genetic makeup.

SelfDecode is a sister company of SelfHacked. The proceeds from your purchase of this product are reinvested into our research and development, in order to serve you better. Thank you for your support.