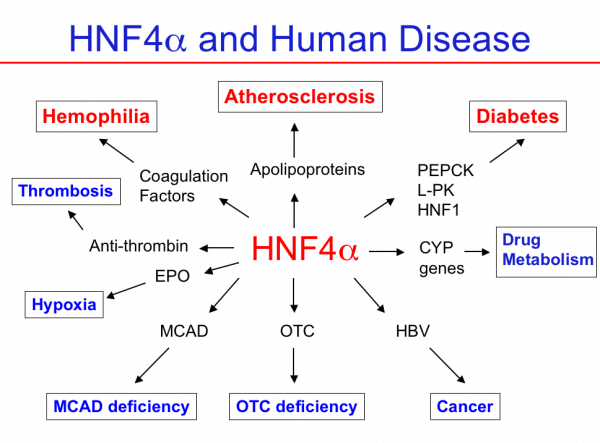 Hepatocyte nuclear factor (HNFa) is the master regulator of hepatic differentiation because it regulates over 60% of genes involved in specific functions of the liver. The functional gene plays a major role in the development of liver, kidney, and intestine. Continue to read to know more about the significance of this nuclear receptor on human health.

What is Hepatocyte Nuclear Factor?

Hepatocyte Nuclear factor alpha (HNFa) also known as NR2A1 is a nuclear receptor in humans and is encoded by the HNF4A gene [1].

The regulation of a gene by HNFa in rodents depends on numerous diverse factors such as the developmental stage, the type of tissue, and the environmental conditions [2].

Hepatocyte Nuclear Factor (HNFa) plays a key role in stimulating the development of the cells in the stomach as illustrated by a study done on knockout mice [3].

In the Chinese interplay among Hepatocyte Nuclear Factor (HNFa) and PPARG (Peroxisome proliferator-activated receptor gamma), genes could contribute to the body’s ability to control blood sugar as evidenced by the results after a sugar (glucose) challenge test [4].

Mutation of the Hepatocyte Nuclear Factor (HNFa) gene leads to maturity-onset diabetes of the young (MODY), but in a study examining white people with type 2 diabetes mellitus, there was negligible risk identified with the rare variants of this gene [5].

As proteins that work as hormone sensors PPARa (Peroxisome proliferator-activated receptor alpha) and HNFa are required for the regulation of a number of important metabolic functions within the liver [7].

4) Controls the Spread of Kidney Cancer

Declining HNFa gene levels have been implicated in kidney cancer and HNFa is in control of how these cells multiply by regulating fourteen different genes involved in the start of cancer development [9].

HNFa in human liver cells directs the activation of proteins found within cells (PXR and CAR) which helps foster the digestion of drugs [10].

The toxic byproducts of acetaminophen digestion trigger HNFa and other receptors (PXR and CAR); microRNA (miR-561) treatments could help in treating liver injuries related to this medication [10].

1) Mutations Could be Connected to a Risk for Diabetes

A mutation of HNFa called the delta 7 promoter deletion suggests that mutations such as these may suggest some predisposition for diabetes [11].

Physical activity shaped the consequences of several HNFa forms on the chances of developing type 2 diabetes mellitus in white families [12].

The risk of developing type 2 diabetes mellitus is higher for carriers of the P2 variant of HNF4a as shown by the increased insulin resistance displayed by a genetics study of healthy subjects [13].

A study done on the human liver cell line has shown how the HNFa receptor is involved in decreasing the production of proteins that play a role in the metabolism of fats [14].

In patients with MODY1 (HNF4a upstream regulator of HNF1a gene mutations) the decrease of activity in HNFa controlled liver enzymes may explain lowered levels of fats [6].

4) Is Suppressed by Liver Cancer

Liver cancer inactivates the HNFa protein in mice; gankyrin is activated by liver cancer and it is this protein that blocks the activity of tumor-suppressing proteins like HNFa [15].

5) Activity is Connected to Kidney Disease

Alteration of HNFa in animal studies has been associated with diabetic kidney disease and has potential in the future development of a treatment for human patients [16].

The HNFa gene does not appear to be directly related to the diagnosis of diabetic kidney disease in whites according to a study of genetic mutations [11].

In human kidney cancer, the HNFa pathway has been tied to the spread of cancerous tissue [17].

4 Benefits of Follistatin + Side Effects

8 Important Roles of Glutamate + Is It Bad in Excess?