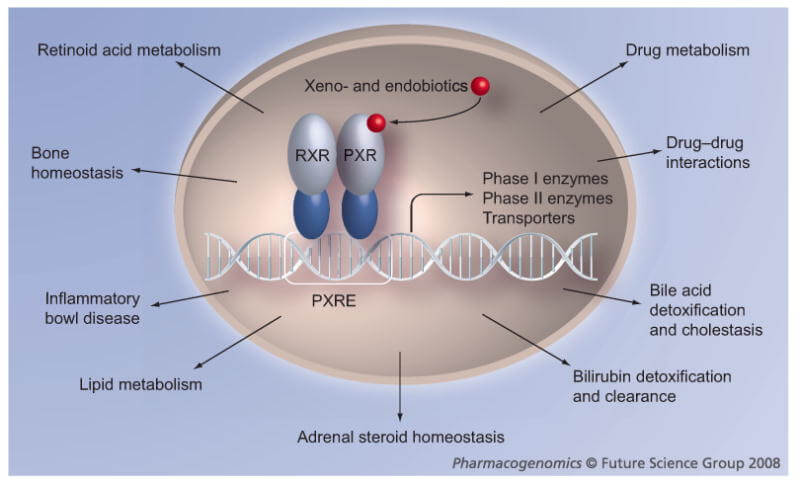 The pregnane X receptor plays an important role in the body by helping the body handle foreign substances. While it decreases inflammation and helps liver function, it also has its cons. It’s important to try and figure out whether you are a high or low PXR producer – and we can figure that out by genes, symptoms and blood tests.

Read more below to learn about PXR.

What is the Pregnane X Receptor?

The pregnane X receptor (PXR) has a significant role in how the body handles any foreign substances, especially manmade chemicals [2].

PXR is one of several cell receptors that are activated by components of the liver’s bile [3].

In newborn mice, exposure to PXR activators directed the genes responsible for the metabolism of extra compounds and fats [4].

Enzymes produced by PXR (such as CYP3A4) that help us detox are reduced in inflammatory states [5].

This is one reason why people suffering from chronic inflammation often feel like they are reacting to all drugs that they take.

Why Do You Not Feel Same Effects The First Time You Take a Drug?

PXR can explain why you don’t feel the same effects from a drug/herb if you take it daily.

When you take a drug that activates PXR (many do), then it will produce a bunch of enzymes that can eliminate the drug quite effectively [6], which is probably why you won’t notice the same effects from the same dosage.

PXR functions as a defense mechanism against toxic insults [6].

PXR induces genes that help with all three stages of detoxification.

PXR increases CYP3A4, an important phase I oxidative enzyme that is responsible for the metabolism of many drugs.

In addition, PXR increases phase II enzymes such as glutathione S-transferase and phase III transport uptake and efflux proteins such as OATP2 and MDR1 [7].

PXR is responsible for decreasing the amount of inflammation that occurs during infection in mice [2].

By modifying the concentration of various enzymes within the intestinal lining, PXR is responsible for maintaining the gut during inflammation [8].

Activation of PXR in humans inhibits the activity of NF-κB, a key regulator of inflammation and the immune response. In mice without PXR, the expression of NF-κB target genes is substantially increased in multiple tissues, and small bowel inflammation is significantly increased [1].

Using humans, a mouse model, and cultured cells, scientists found a connection between the PXR pathway and decreased the activity of key enzymes involved in nonalcoholic fatty liver disease [10].

PXR helps detox products such as bile and bilirubin [12], so if you have Gilbert’s Syndrome, you may not have enough PXR.

PXR has been shown to induce the expression of multiple key components in the clearance pathway of bile and bilirubin, including UGT1A1, OATP2, GSTA1 and 2 and MRP2 [1].

Consistent with the pattern of gene regulation, activation of PXR in mice has been shown to prevent experimental hyperbilirubinemia [13].

Ulcerative Colitis (UC) has a bunch of detox genes that are not expressed well that can be increased by PXR (such as ABCB1/MDR1).

With less PXR, animals had a lowered ability to remove toxins in the gut, which likely contributes to UC [14].

Activation of PXR in humans inhibits the activity of NF-κB, a key regulator of inflammation and the immune response. In mice without PXR, the expression of NF-κB target genes is substantially increased in multiple tissues, and small bowel inflammation is significantly increased [1].

The PXR gene was identified as a gene strongly associated with the susceptibility to IBD in humans [15].

In patients with IBD, decreased expression of PXR and PXR target genes was also noted [16, 17].

In mouse models of colitis, treatment with the PXR activators protected against colitis [18]. PXR may work by increasing SCD1 and increased the production of unsaturated fatty acids [1].

PXR plays a role in the genes that oversee drug resistance. This can complicate treatment in some forms of cancer [19].

Suppressing PXR by way of inhibitory drugs can enhance the effect of anticancer medications for ovarian cancer. This helps the body overcome the treatment difficulties brought on by drug resistance [19].

In human colon cancer cells, PXR was shown to inhibit a crucial tumor-suppressing gene. This can cause tumors to grow bigger [20].

2) Activation of PXR Can Interfere With Drug Metabolism

Chemicals in industrialized areas that produce plastic can be potentially toxic activators of the pregnane X receptor [22].

New brominated flame retardants and their byproducts activate PXR. This possibly causes undesirable interactions between drugs, interfering with the normal metabolism, or the body’s ability to maintain healthy hormone levels [23].

PXR is sensitive to metabolites produced by microbes, especially those that infect the intestine [8].

This suggests that activation of PXR by some drugs may be responsible for the acceleration of vitamin D breakdown through increasing CYP3A4 and CYP24, leading to vitamin D deficiency and, eventually, to bone loss [1].

Activation of PXR in the livers of mice resulted in an increased deposit of triglycerides in the liver [1].

The activation of PXR was also associated with an inhibition of pro-fat burning genes, such as PPARa, thiolase, Cpt1a and Hmgcs2 [1].

On the other hand, it increases the fat-storage/increasing genes PPARy and Scd1 [1].

Activation of PXR in mice markedly increased plasma concentrations of cortisol and aldosterone [24].

The increased levels of corticosterone and aldosterone were associated with activation of adrenal enzymes, including Cyp11a1, Cyp11b1, Cyp11b2 and 3β-Hsd [24].

The PXR-activating mice also exhibited overgrowth of the adrenal cortex, loss of cortisol circadian rhythm, and a lack of cortisol responses to psychological stress [24].

It could contribute to Pseudo-Cushing’s syndrome, which is most seen in alcoholic, depressed or obese subjects [24].

PXR may promote colon cancer in a certain model by inhibiting p53, a tumor suppressor gene [20].

PXR seems to have mixed effects on oxidative stress [25].

Activated PXR in transgenic female mice resulted in a heightened sensitivity to an oxidative toxicant [25].

The PXR-induced sensitivity was associated with decreased activities of superoxide dismutase and catalase, enzymes that scavenge superoxide and hydrogen peroxide, respectively [25].

SelfDecode has 3 SNPs on the PXR gene:

24 Supplements That May Naturally Increase Serotonin

12 Possible Reasons You May Feel Tired After Eating