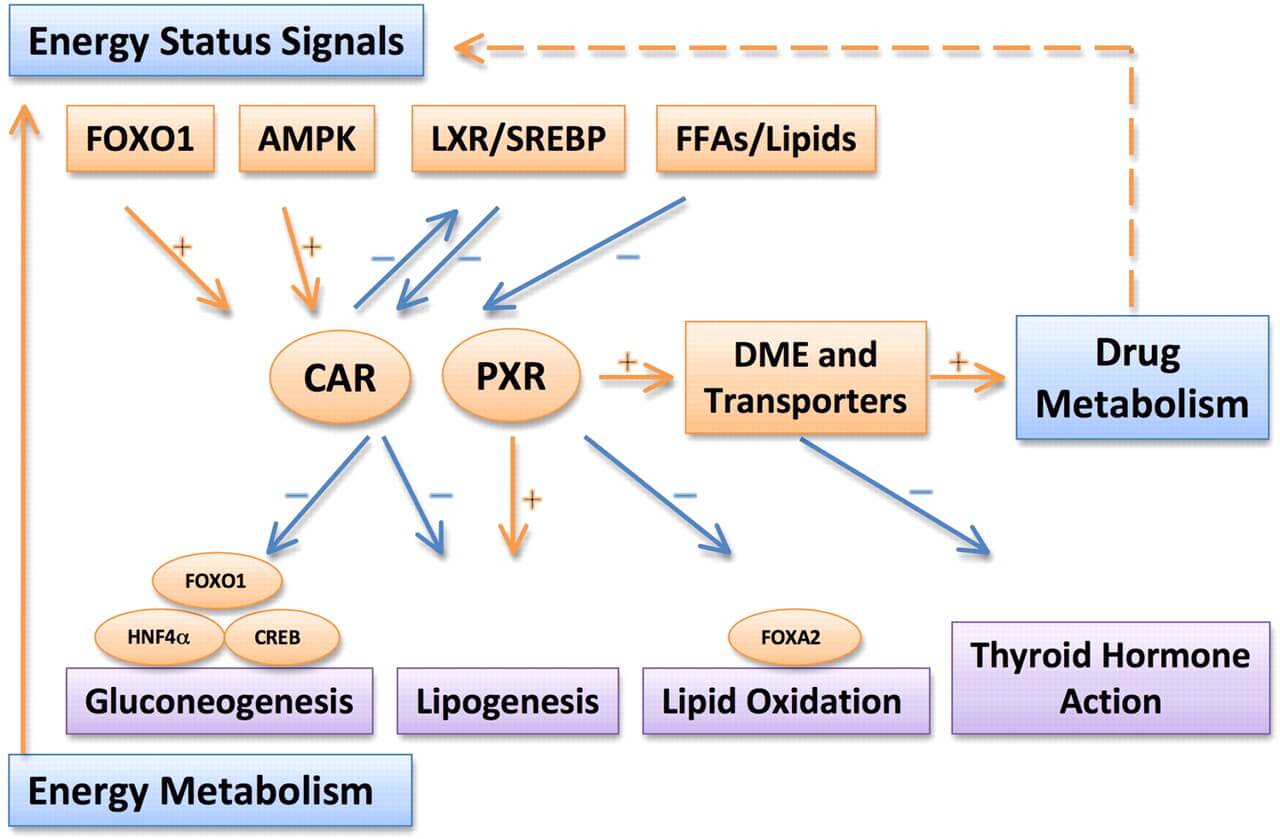 Constitutive Androstane Receptor (CAR) is important for the metabolism of the body. It helps break down foreign and toxic substances as well as decreases insulin resistance. Read more below to learn about CAR and what to do about it.

What is the Constitutive Androstane Receptor?

Constitutive Androstane Receptor (CAR) is a protein encoded by the NR1I3 gene and is part of the Nuclear Receptor family.

Nuclear Receptor proteins, in general, are responsible for the homeostasis and metabolism of the body. They work by sensing the presence of steroids, hormones, and other molecules, and in response, regulate the expression of certain genes.

The CAR protein is involved in regulating the breakdown of both substances from outside as well as inside the body, such as bilirubin (a substance in the intestines) and drugs/medications. Damaged CAR proteins or genes can result in diseases such as biliary tract disease and hyperparathyroidism [1].

CAR was originally characterized as a “xenobiotic sensor” that is activated in response to xenobiotic stress (ingesting anything that is not natural to the body) [2].

The drug-metabolizing enzyme cytochrome P450 3A4 (CYP3A4) is thought to be involved in the metabolism of nearly 50% of all the drugs currently prescribed. Alteration in the activity or expression of this enzyme seems to be a key predictor of drug responsiveness and toxicity. The constitutive androstane receptor increases CYP3A4 production [3].

Additionally, CAR is also activated in response to metabolic or nutritional stress [2].

CAR is produced primarily in the liver and intestines [5].

Do You React to All Supplements Because of Low CAR?

Many clients can’t seem to tolerate ANY drugs and low CAR might be the reason (in addition to low PXR and RXR).

Inflammation reduces both CAR and PXR, which can harm all 3 stages of drug metabolism [6].

Other nuclear factors that are also involved in the detoxification of drugs/supplements:

1) Helps the Body Break Down Drugs

The CAR protein senses foreign substances in your body and tells your genes to make more enzymes that will break down and get rid of the substance. This can change the drug’s effect on your body, for example making it less effective or more toxic [8].

When CAR is activated, it promotes the passage of substances across cell and organ membranes, helping foreign substances enter the liver, get broken down, and exit the body through the kidneys or bile [9].

In mice, CAR helps prevent obesity and weight gain. It can help protect against the fattening effects of high-fat diets [11].

Mice lacking CAR have a hard time with weight loss during extended periods of caloric restriction [2].

3) Controls the Level of Toxic Substances

Bilirubin is a toxic substance produced by the breakdown of hemoglobin. If left in the body, bilirubin can cause jaundice and neurological disorders.

CAR regulates the genes that transport bilirubin out of the body and is, therefore, regulates the amount of bilirubin, making sure it never gets high enough to become toxic [9].

People with high bilirubin (such as Gilbert’s Syndrome) may have lower levels of CAR activation.

CAR activates the proteins that break down Tylenol/acetaminophen (CYP1A2, CYP2E1, and CYP3A) [9].

CAR is in charge of the gene that makes the enzyme that synthesizes bile acid, and also controls some of the genes that make transport proteins involved in the removal of bile acids from the body [9].

CAR helps the activity of the CYP2C19 protein. It might be involved in the development and/or contraction of liver tumors [15].

CAR breaks down and metabolizes foreign substances in your body, and is part of the defense team that keeps you healthy. But sometimes, the breakdown of these substances can result in different chemicals that react with the molecules in your liver, resulting in different forms of hepatitis according to studies done on mice [9].

Do You Have High or Low CAR?

Many clients I get often have an overactive nervous system (increases CAR), are thin and have lower T3. This would seem to indicate that CAR is probably at higher levels.

Some clients (5 – 10%) have higher bilirubin, which may suggest that CAR is lower.

CAR is something that is best checked with genetics.

CAR is produced by the NR1I3 gene. These two SNPs are on SelfDecode:

You should check your genetics to see if you have SNPs that may lower CAR activity.

UGT1A1 plays pivotal roles in the clearance of bilirubin – an end product of heme breakdown that is one of the most toxic natural breakdown products in the body [16].

Reduction in UGT1A1 is associated with Gilberts’ syndrome (elevated bilirubin) in the absence of liver disease.

Polymorphism analysis of the UGT1A1 genes revealed that a SNP located within the CAR-responsive region displayed significantly higher frequency in patients with Gilbert’s syndrome (58%) than in healthy volunteers (17%) [17].

Activation of CAR increases the major pathway of bilirubin clearance by inducing the expression of UGT1A1, MRP2, SLC21A6, GSTA1, and GSTA2 [18].

See if you have the SNP for low UGT1A1 activity on SelfDecode:

Many polyphenols and flavonoids increase CAR.

What Are Mitochondria? Definition, Function & Structure