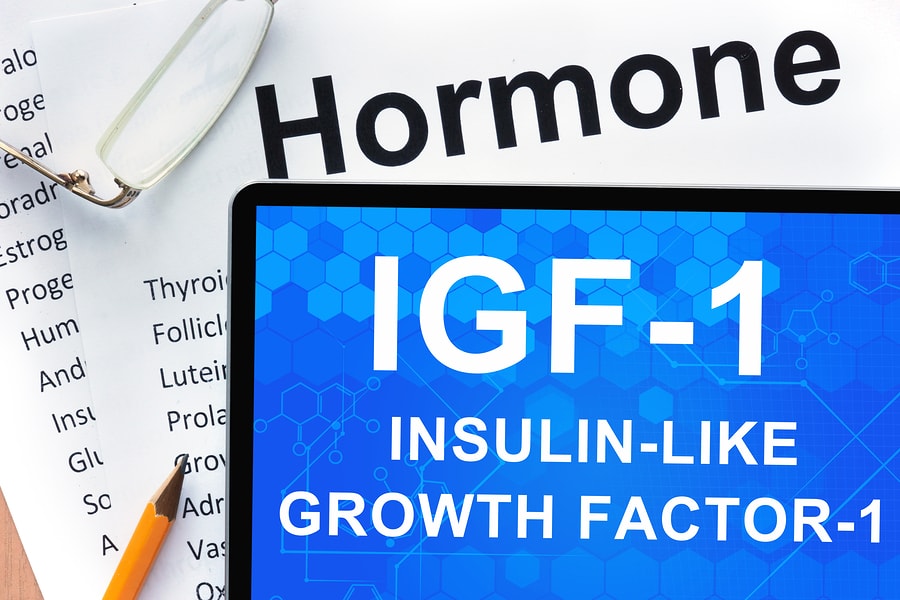 IGF-1 is commonly known to help build muscle or as something to avoid when dealing with cancer. However, IGF-1 is also crucial in healing and tends to be low in those with chronic inflammation. Learn all about how this growth factor works here.

What is Insulin-Like Growth Factor 1?

Insulin-Like Growth Factor 1 (IGF-1) is a hormone that is similar in structure to insulin and works with Growth Hormone to reproduce and regenerate cells.

Growth Hormone, made by the pituitary gland, stimulates the liver to produce IGF-1 and IGF-1 subsequently stimulates growth in cells throughout the body, leading to growth and development (as in the womb and through adolescence), strengthening of tissues (improving bone density, building muscle), and healing (skin, bones, gut lining, etc.), depending on what the body needs [1].

IGF-1 is so crucial to development that if it is not present in adequate amounts during the time when a child is developing, short stature may result.

In several organisms such as fruit flies, worms, and rats, IGF-I is involved in the control of lifespan.

In most studies in mice, inhibiting Growth Hormone/IGF-I results in an increase in lifespan (up to 55%). However, in humans, the association between IGF-I levels and life expectancy doesn’t hold up [2].

Unlike lab animals, humans are exposed to various infections, stress, and other environmental factors that IGF-1 might help.

Having either low or high IGF-1 was associated with higher cancer mortality in older men. This was one small study, and though its results were intriguing, they would need to be repeated before they can be taken as conclusive [3].

In a meta-analysis of twelve studies done in 2011 with 14,906 participants, the risk of dying from all causes was increased in subjects with low as well as high IGF-1 levels [4].

The activity of IGF-I is influenced by at least six binding proteins (IGFBP). The most abundant is IGFBP-3, which binds more than 90% of IGF-1 in the circulation. Although IGF-I and IGFBP-3 are typically well-correlated, there is speculative evidence that IGF-1 has an independent impact on disease risk, for example, on cancer [5].

The length of telomeres in the DNA has shown to be important predictors of longevity. IGF-1 has been shown to correlate with greater telomere length in healthy subjects of all ages [6] and in elderly men, in another study [7].

In the famous Framingham Heart Study of 525 people between the ages of 72 and 92, greater levels of IGF-1 were associated with a decreased risk of dying in the next 2 years [8].

Aging [10], and its associated frailties, such as lowered muscle strength, slower walking, and less mobility are associated with lower levels of IGF-1 in older women [11].

It protects cells exposed to radiation, by preventing cell death and increasing the antioxidant status [14].

In mouse models of autoimmunity and brain inflammation, administration of IGF-1 delayed disease onset; however, giving IGF-1 after the disease had developed led to an enhanced worsening of the disease [17].

Allergic contact dermatitis, Multiple Sclerosis and type 1 diabetes is reduced in mice when they’re given IGF-1 [18].

Low IGF-1 levels have been documented in patients with HIV [19] and inflammatory bowel diseases.

Patients with chronic inflammatory diseases, such as Rheumatoid Arthritis and Lupus tend to have lower levels of circulating IGF-1 [20].

In animals studies, high histamine levels in the body are associated with low IGF-1 in the blood (reduced via a histamine H1 receptor-mediated pathway) [22].

It works as an anti-anxiety and antidepressant in mouse studies [24].

Lower levels of IGF-1 are associated with depression in aged mice [25].

IGF-1 prevents the accumulation of amyloid plaque in the brain, in a rat model of Alzheimer’s disease [27].

It increases BDNF in the brain, mimicking the effects of exercise [30].

IGF-1 is important for building muscle [33], and for reducing muscle loss in aging and disease.

People who are obese are more likely to have lower free IGF-1 [36].

In hepatitis C, people have lower IGF-1 and they are more likely to be insulin resistant, and it’s thought that these might be connected [37].

IGF-1 has shown to have anti-inflammatory and anti-oxidant effects on blood vessels, stabilizing existing plaque and reducing additional plaque accumulation [38].

Lower IGF-1 levels were associated with a higher risk of stroke in a study of a Chinese population [39].

Growth Hormone’s (GH) activity in the body is dependent on IGF-1. So, IGF-1 deficiency causes insensitivity to GH and its effects on growth and repair.

Poor growth of an infant in the womb can be due to lowered IGF-1 [41].

Laron Syndrome (a type of dwarfism) is associated with lower IGF-1 in children [42].

We know that IGF-1 is a direct promoter of bone growth [43].

In animal models of colitis, burns and jaundice, treatment with IGF-1 improved gut health. It stimulated mucosal DNA and protein content and drastically reduced the incidence of bacterial translocation [45, 46, 47].

In animal models of cystic fibrosis, IGF-1 was able to help clear bacteria from the lungs [51].

Insulin-like growth factor-I (IGF-I) is the most potent stimulator of collagen biosynthesis and may help prevent skin aging [57].

Other Effects of IGF-1

1) May Contribute to Cancer Development

Because IGF-1 stimulates growth, cancer cells can hijack it to support their own development.

IGF-1 was shown to increase the invasiveness of breast cancer [61].

A review of 17 studies found that IGF-1 is positively associated with breast cancer risk, taking levels of IGF binding protein (IGFBP3) into account, due to its effects on estrogen-sensitive tumors [62].

High IGF-1 is associated with an increased risk for prostate cancer [63].

Higher IGF-1 levels in the blood are associated with colorectal cancer [66].

However, another study found that both low and high IGF-1 increased the chance of dying from cancer [3].

Increased IGF-1 may influence acne in adult men and women. While IGF-1 appears to have a stronger effect on acne in women, testosterone/androgens may play a greater role in acne for men [67].

The IGF-1 blood test is currently only approved to identify growth hormone deficiency. Work with your doctor to determine whether an IGF-1 test is necessary in your case [68].

Much more research will be required before it can be used as a diagnostic tool for any of the other conditions discussed below. However, researchers have found these associations, and we think it’s interesting to look at where the research is going, so we provide them for our readers’ interest and information.

Factors that May Increase/Decrease IGF-1

It’s important to remember that no good evidence supports the claim that increasing or decreasing IGF-1 is good for your health. The studies we discuss below have found associations, but have not proven causation.

These lifestyle changes, supplements, and other factors may increase or decrease IGF-1 levels, but none of these strategies have been proven to affect health outcomes. Work with your doctor to treat any underlying condition causing high or low IGF-1.

IGF-1 is heavily influenced by your genes. If you’ve gotten your genes sequenced, SelfDecode can help you determine if your levels are high or low as a result of your genes, and then pinpoint what you can do about it.