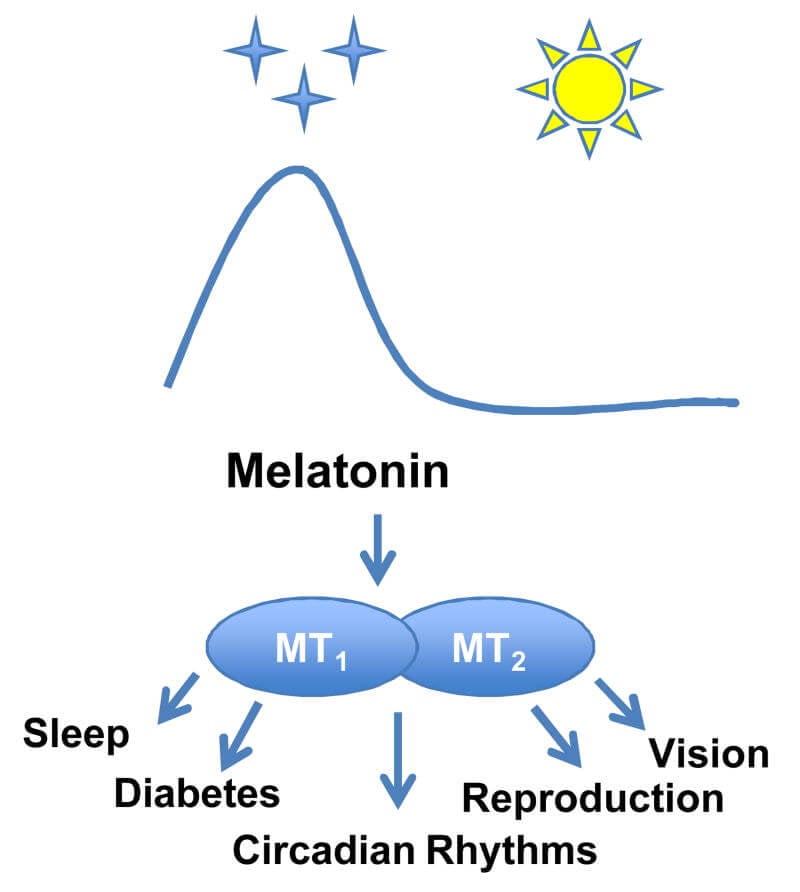 Melatonin is known for its role in sleep control, but it has a range of other roles and potential benefits. Optimal levels will ensure proper sleep quality, brain and gut health, reduced inflammation, and more. Read on to learn the factors that increase or decrease melatonin levels and discover potential synergies.

The following is a list of factors that may balance low melatonin levels. Though studies suggest various dietary and lifestyle factors may increase melatonin, additional large-scale studies are needed. Remember to talk to your doctor before making any major changes to your day-to-day routine.

Melatonin shows promise in improving insomnia and reducing jet lag. It also does not have any serious side effects [1].

Although the optimal dosage is not yet determined, researchers recommend a lower dosage range. Even at low dosages, there is already a significant increase in melatonin levels after administration [2].

The recommended dosage range for elderly adults is 0.3 – 2 mg, around 1 hour before bedtime [2].

Folate and vitamin B6 boost the formation of serotonin, which is the precursor of melatonin [3].

In rats, vitamin B6 injections enhance melatonin production. After two months of B6 injections, the blood level of melatonin increased by 35.95% [4].

Additionally, zinc and magnesium increase the formation of melatonin from serotonin. They bind and activate the AANAT enzyme. This increases the affinity of serotonin for binding to AANAT [3].

Agonists (activators) are agents, usually drugs, which bind and increase the activity of a receptor. The following are melatonin activators.

Vitamin C, Vitamin D3, and Vitamin E are important antioxidants. Melatonin also has antioxidant activity. It can synergize with each vitamin individually to make a more powerful effect [21, 22, 23].

In animals, alpha-lipoic acid works to scavenge free radicals. This means that it stops oxidative damage and has antioxidant activity [21].

When used in combination with melatonin, alpha-lipoic acid stopped DNA damage 3 times more effectively than when it was used alone. Melatonin and alpha-lipoic acid worked together to protect calf DNA from oxidative stress [21].

Glutathione is a potent antioxidant that decreases lipid (fat) breakdown [22].

Melatonin and glutathione combined had a greater antioxidant effect than when either was given individually. Their antioxidant activity combined to have a greater effect in rat livers [22].

Melatonin also helps stimulate glutathione activity in rat brains. They work together to eliminate peroxides and free radicals that cause oxidative damage [24].

Melatonin and selenium work together to improve the treatment of brain ischemia and consequent damage in male rats. This combination helped reduce injury and prevented brain inflammation [25].

EGCG is responsible for most of the antioxidant effects of green tea. It prevents oxidative damage and protects cellular DNA [21].

However, high doses of EGCG or green tea extracts can cause hepatotoxicity (liver damage). Melatonin reduces toxicity due to EGCG overdose [21].

In one study, researchers gave mice toxic and lethal doses of EGCG. Melatonin extended the survival time of mice given toxic doses of EGCG. Meanwhile, it also helped reduce liver injury caused by a nonlethal toxic dose of EGCG [26].

Resveratrol has both antioxidant and anti-inflammatory activities. However, it can also exhibit pro-oxidant action and contribute to oxidative damage in excessive amounts [27].

Resveratrol, in the presence of other antioxidants, loses its pro-oxidant action and acts as an antioxidant. Melatonin was highly effective in reversing resveratrol’s pro-oxidant DNA damage in calf DNA. However, they do not combine to make a greater (synergistic) antioxidant effect [21].

What Is Motilin? Function & Role in Gut Health