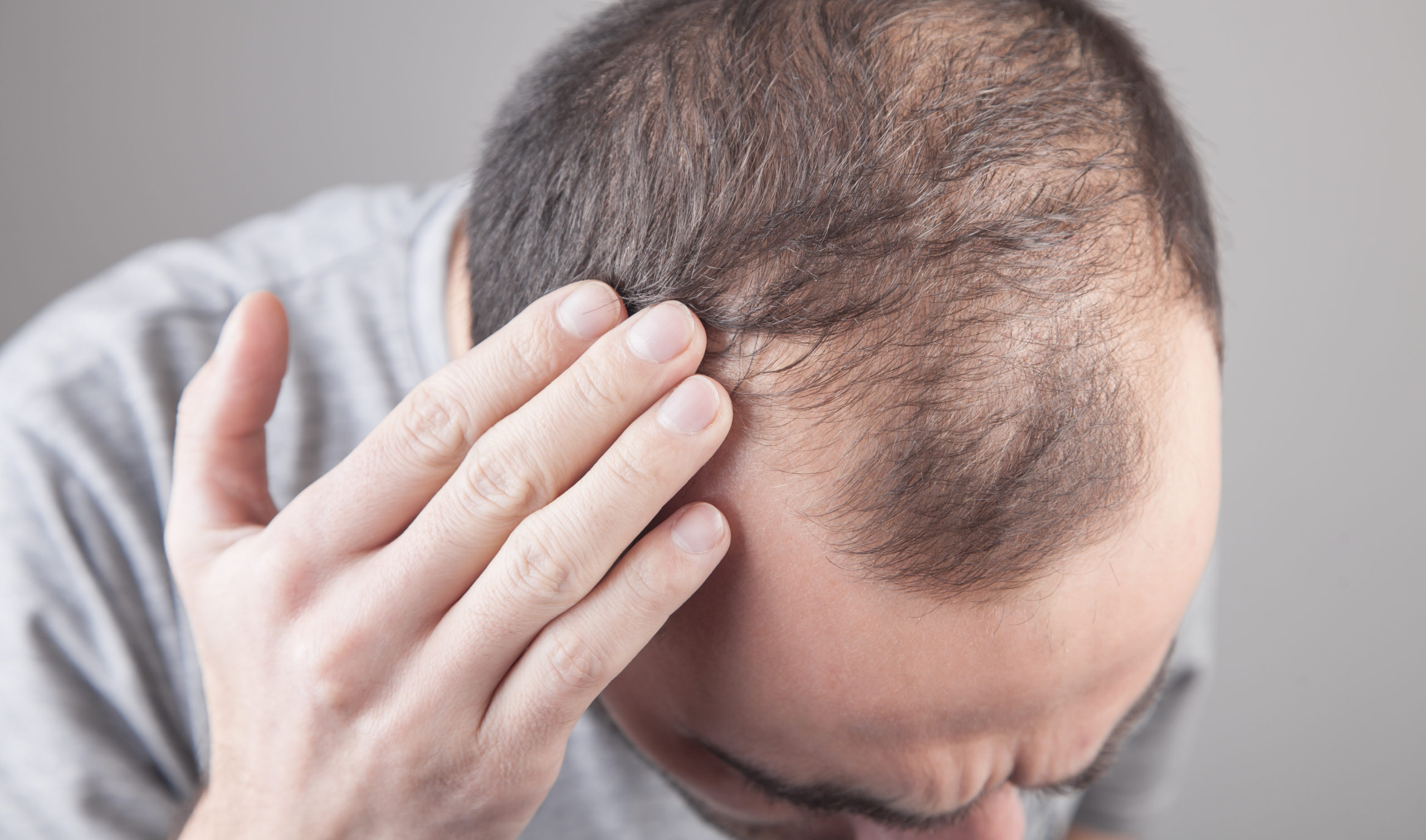 In the following sections, we’ll outline complementary approaches that may help you deal with male-pattern baldness. The below strategies are not meant to replace your standard medical treatment. Make sure to consult with your doctor before making any significant changes to your day-to-day routine.

Low-level laser therapy (LLLT) is the application of low-power lasers to the surface of the body. It seems to stimulate the production of NO and free radicals, both of which act as messenger molecules to trigger physiological responses such as hair growth [1].

The FDA approved this technique for male-pattern baldness in 2007. Meta-analyses of 11 different placebo-controlled trials suggest that LLLT may improve hair growth and density, both alone and in combination with conventional treatments. However, they warned that larger studies with longer follow-up periods and independent sources of funding are required to confirm these results [2, 3, 4].

Several studies have associated smoking with an approximately 2-fold increased risk of male-pattern baldness. Cigarette smoke may cause oxidative and inflammatory damage in the hair follicles, impair hair growth, and reduce female sex hormone levels. A study found that the combination of smoking with being overweight increased male-pattern baldness severity [5, 6, 7, 8, 9].

Being overweight or obese has been associated with increased severity of male-pattern baldness [10, 6, 11].

Scalp massage for 4 minutes during 24 weeks improved hair thickness, possibly by increasing the levels of several proteins involved in hair growth, in a small uncontrolled trial of 9 men. In a survey on 340 men with male-pattern baldness, scalp massage improved self-perceived hair density [12, 13].

In a study of 100 people with hair loss, most of the 34 subjects with male-pattern baldness had deficiencies of the essential amino acids histidine, leucine, and isoleucine. Dietary sources of these amino acids include protein-rich foods such as meat, fish, dairy products, eggs, and legumes [14].

The Recommended Dietary Allowance of protein is 0.8 g per kg of body weight, per day (for both men and women) [15].

A study of 120 men found that those with male-pattern baldness had lower blood levels of zinc and vitamin B7 [16].

In another study of 48 men with this condition, normal blood zinc levels were associated with better success of conservative therapies and increased hair density [17].

In a study on over 200 men, the incidence of male-pattern baldness was reduced by over 50% in those eating a Mediterranean diet rich in fresh vegetables (3 or more per week) and herbs (3 or more regularly) [19].

A study of 120 men found that those with male-pattern baldness had lower blood levels of vitamin B7 (biotin) and zinc [16].

Vitamin B7 can be found in a wide variety of foods including animal liver, egg yolks, cow milk, and some fruits and vegetables [20].

A Taiwanese study of over 1,500 men associated the regular consumption of soy drinks (at least 1-3 days/week) with a reduced incidence of male-pattern baldness [21].

Topical lotions and shampoos with caffeine increased hair strength and thickness while decreasing hair loss in 4 trials (2 of them controlled) of 340 men with male-pattern baldness. The lotion enhanced the effectiveness of minoxidil in one of them [22, 23, 24, 25].

Similarly, a shampoo with caffeine used for 6 months reduced hair loss and increased hair strength in women in a placebo-controlled trial [26].

The apple polyphenol procyanidin B2 increased hair density when topically applied for 4-12 months in 3 placebo-controlled trials of 101 men [27, 28, 29].

Topical adenosine applied for 6 months increased the proportion of thick hair in two placebo-controlled trials of 140 men with male-pattern baldness [30, 31].

In a non-placebo controlled trial of 55 men, a topical solution with 0.75% adenosine was as effective as minoxidil at recovering hair growth. Moreover, patients were more satisfied with adenosine because they perceived faster reduction of hair loss and growth of new hairs [32].

In a placebo-controlled trial of 60 men and women with baldness caused by male sex hormones, topical application of a solution with 2% L-carnitine for 6 months increased hair density and the proportion of hairs in the active growth phase. L-carnitine promoted hair follicle cell growth while preventing their death [33, 34].

In an uncontrolled trial of 60 men and women, two similar commercial solutions with L-carnitine, gamma-linolenic acid, and a compound from soybean (equol) increased both hair count and the proportion of hairs in the active growth phase after 1-6 months of application [35].

In a placebo-controlled trial of 50 men with male-pattern baldness, topical rosemary oil applied for 6 months increased hair counts as effectively as minoxidil [36].

In another placebo-controlled trial of 86 men, aromatherapy massage with rosemary and other essential oils (lavender, thyme, and cedarwood) improved hair density in 43% of those who received it [37].

Rosemary leaf extract promoted hair growth in mice with their backs shaved and hair regrowth in those treated with testosterone [38].

In a placebo-controlled trial of 87 men with male-pattern baldness, 5% pink and blue ginger (Curcuma aeruginosa) extract caused hair regrowth, especially if combined with minoxidil. Pink and blue ginger extract may enhance the effectiveness of minoxidil and its ability to penetrate into the skin [43].

A lotion with 0.5% Ku Shen (Sophora flavescens) extract applied on the scalp 2x/day for 6 months improved baldness in a placebo-controlled trial on 73 men. The extract also improved the growth of cultured hair follicle cells [44].

In a placebo-controlled trial on 50 men with male-pattern baldness, rice bran extract applied on the scalp for 16 weeks increased hair density and diameter [45].

This extract, especially its active components linoleic acid and gamma-oryzanol, induced hair growth and the development of hair follicles in mice [46].

In an uncontrolled trial of 30 men with receding hair, a topical product with red clover applied for 4 months increased the amount of hair in the active growth phase by 13% while reducing that in the resting stage by 29% [47].

In mice, its active component formononetin promoted hair regrowth by preventing the death of hair follicles [48].

A topical preparation with 0.01% raspberry ketone applied for 5 months promoted hair growth in 4 out of 6 men with male-pattern baldness in an uncontrolled trial. The preparation was also effective in a woman with patchy hair loss and in mice [49].

In a small placebo-controlled trial of 26 men with male-pattern baldness, oral capsules with saw palmetto extract and beta-sitosterol improved hair density in 60% of those who took them [52].

Allergies: How To Manage Your Symptoms