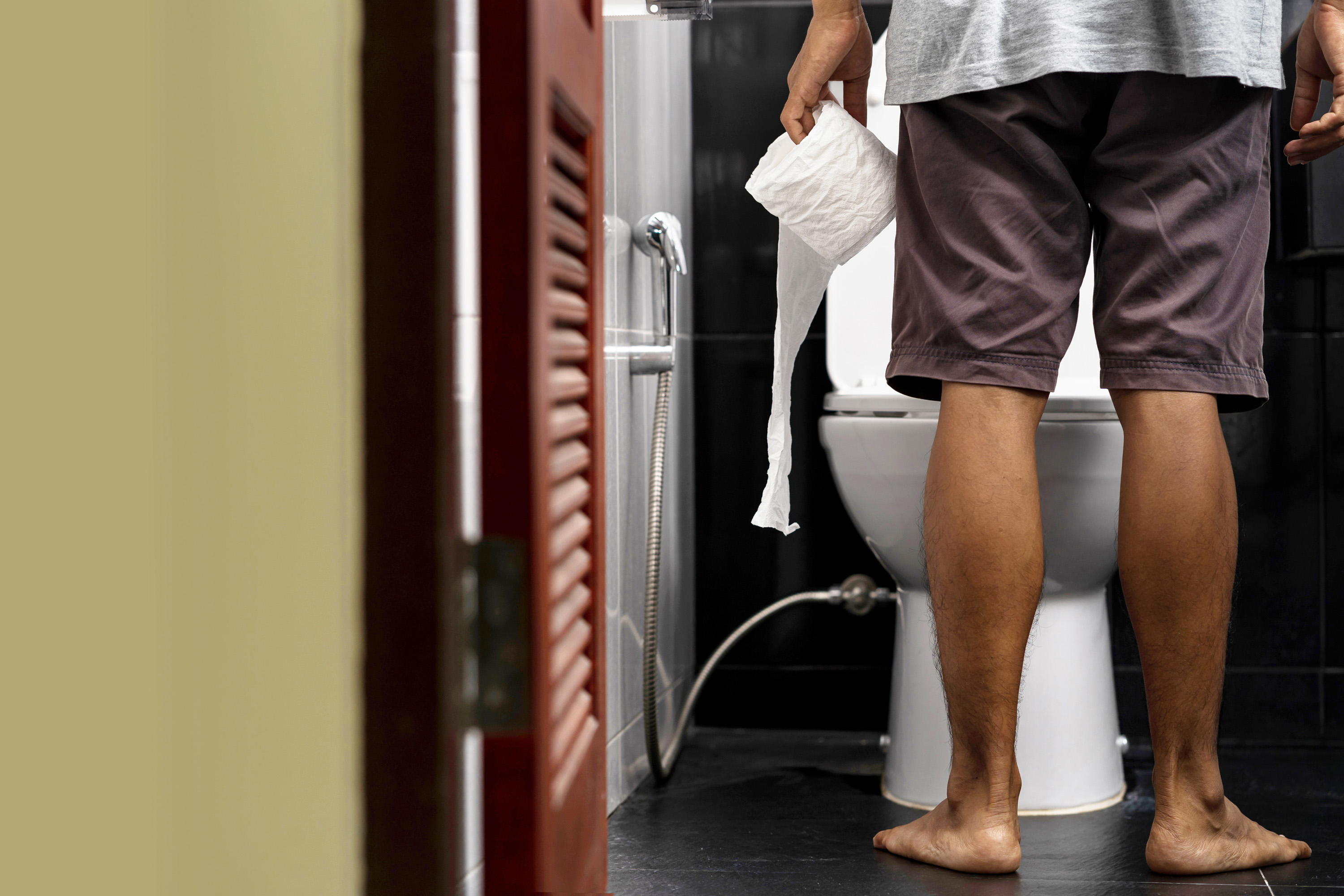 Constipation is a common condition that affects 27% of the population. Find out how laxatives work and learn about the research behind various treatments that are purported to relieve constipation.

Laxatives are substances that stimulate bowel movements. They are used in the treatment of constipation. Many types of laxatives are available over-the-counter without a prescription.

Constipation is difficulty passing stools. Symptoms may include [1]:

If you have constipation and any of the following symptoms, let your doctor know right away [1]:

There are 2 types of constipation:

Diets with the following characteristics may contribute to constipation:

Other Causes of Constipation

Some other factors that may contribute to constipation include [1]:

Laxatives can stimulate bowel movements in different ways. While some increase moisture or bulk of the stool, others act directly on the intestines. Below are the most common types of laxatives [9]:

A stool softener is a type of laxative. The word “laxative” is an umbrella term for all substances that ease constipation. Stool softeners increase the water content of feces, which reduces friction as it moves through the intestines.

Talk to your doctor if you are experiencing persistent constipation. It could be a sign of a more serious medical condition. Your doctor can also identify if any of your medications are potentially contributing to constipation.

Before taking any complementary or over-the-counter treatments for constipation, there are several general recommendations to try, including [10, 11]:

In the following sections, we’ll discuss the research behind some of the complementary treatments commonly used for constipation. Talk to your doctor before taking any of these treatments. They should never be used as a replacement for approved medical therapies.

Senna is a flowering plant in the legume family and a common stimulant laxative. Senna products, such as Senokot and Ex-Lax, can be bought over-the-counter [12].

A number of clinical trials show that senna is likely effective for the short-term treatment of constipation.

For example, a systematic review of 7 trials including 444 patients found that senna was superior to or as effective as other laxatives for chronic constipation [13].

Senna is likely safe when taken orally in appropriate doses. It is an FDA-approved nonprescription drug.

The previously mentioned review of 444 patients did not find any serious safety concerns associated with senna, but research into long-term use is lacking [13].

Another review of 8 clinical trials that only looked at children concluded that senna is likely a safe option for constipation in children, although there are rare reports of skin blistering, probably due to skin contact with stool. However, do not give senna to young children unless approved by a doctor [14].

Psyllium is a stool softener made from the husk of plants from the Plantago genus. It can be bought over-the-counter and is used as a food thickener, dietary supplement and natural laxative [15].

Psyllium is high in soluble fiber, which allows it to absorb water and form a gel-like substance in the colon [16].

Psyllium is FDA-approved as an over-the-counter laxative for the short-term treatment of constipation. This is because a number of clinical trials have found that psyllium is effective at relieving constipation by improving stool water content, stool output, and bowel movement frequency [17].

Psyllium is likely safe when taken orally, but only when taken with an adequate amount of fluids. Dry psyllium products carry a warning that states they must be taken with at least a full glass of fluids to minimize the risk of choking.

A variety of over-the-counter products containing magnesium are available for the treatment of constipation. These laxative products include magnesium citrate, magnesium sulfate, magnesium oxide, and magnesium hydroxide (milk of magnesia) [18].

Magnesium is commonly used for the treatment of constipation. However, this use is mostly based on expert opinion and clinical experience as there is a lack of clinical research that supports the use of magnesium for constipation [19, 20, 21].

Magnesium is likely safe when taken by mouth in appropriate doses. The upper limit of magnesium is 350 mg per day.

However, magnesium is not recommended as a laxative for individuals with kidney or heart disease because it can cause electrolyte imbalances [18, 21].

There is some evidence that aloe is possibly effective for constipation symptoms by acting as a laxative when taken orally.

A study of 35 people with chronic constipation found that a combination supplement containing aloe vera, psyllium, and celandin may increase bowel movements and dependence on other laxatives [22].

Other reviews suggest that aloe latex may act as a stimulant laxative when taken orally. Aloe latex is a yellow substance found under the plant skin [23, 24].

Ingesting aloe latex is possibly unsafe, according to research. Studies show that compounds in aloe latex called anthraquinones may promote the growth of tumors. For this reason, the FDA has banned the use of aloe latex as a laxative product [25].

Prunes and prune juice are likely safe when consumed in the amount that is typically found in food. In the previously mentioned clinical trial of 40 constipated people, subjects were given 50 grams of prunes twice a day and no side effects or safety concerns were reported [26].

Castor oil comes from the seeds of the castor bean plant and has been used in traditional medicine to treat various ailments.

There is some evidence that castor oil is possibly effective for constipation.

In a study of 30 chronically constipated rest home residents, castor oil packets decreased the symptoms of constipation, including straining, hard stools, and an incomplete passing of feces [27].

Castor oil is likely safe when taken by mouth in appropriate doses. However, the seed that castor oil comes from is poisonous and may be lethal when ingested. The whole seed of the castor bean plant should never be consumed. The castor oil manufacturing process will remove the toxic compounds found in the seed [28].

Probiotics are gut bacteria that can aid in digestion. Some strains may have laxative effects.

Research suggests that certain strains of probiotics are possibly effective for relieving constipation.

A systematic review of 14 clinical trials including 1,182 patients found that probiotics (especially Bifidobacterium species) may improve stool frequency and consistency [29].

Probiotics are generally considered to be likely safe, but only for specific bacteria strains. Bifidobacterium or Lactobacillus species have been used in clinical trials for up to 15 months in children and adults without any reported safety concerns [33].

Olive oil is possibly effective as a laxative for relieving constipation.

In a 4-week randomized controlled trial, 50 constipated adults were given either olive oil, flaxseed oil or mineral oil. In the study, all three treatments improved constipation symptoms [34].

Bran is the hard outer layer that coats cereal grains. Wheat bran can be eaten as a cereal, in bread, or mixed into smoothies.

A placebo-controlled study including 60 patients found that wheat bran may increase stool output. However, in the study, wheat bran did not help soften stool. Several other studies have found similar results [36, 37, 38].

Consumption of wheat bran is considered likely safe for adults and children when taken appropriately [39].

Flaxseeds are small, brown seeds that are increasingly popular for their high-fiber and low-carb qualities.

Although there is some evidence that flaxseed may have a laxative effect, there is currently a lack of clinical research on its effectiveness in constipation.

In a study of young healthy adults, flaxseed consumption increased the number of bowel movements per week [40].

A randomized study of 43 elderly patients studied the effects of yogurt containing flaxseed, prunes, and galacto-oligosaccharides (plant sugars). According to the study, this yogurt product may improve the frequency of bowel movements and stool consistency. However, it’s unclear how much flaxseed contributes to this effect compared to the other ingredients [41].

Ground flaxseed is likely safe when taken by mouth in appropriate amounts. However, ingestion of raw or unripe flaxseed is possibly unsafe as it contains potentially toxic compounds [42].

Coffee is believed by many to act as a laxative, but there is insufficient clinical evidence to support this claim.

Several studies suggest that coffee may stimulate muscle activity in the colon [43, 44].

However, caffeine also stimulates the kidneys to expel more water, which can be dehydrating. This effect can potentially make constipation worse [45].

Baking soda has traditionally been used as a home remedy to relieve constipation. However, there is no scientific research to support the use of baking soda as a laxative.

The use of laxatives for weight loss has not been proven effective. Laxatives are sometimes misused or abused by those seeking to lose weight, leading to many dangerous health consequences.

Laxative abuse may cause dehydration. The body responds by retaining water and becoming bloated (edema), leading to temporary weight gain. This can reinforce further laxative abuse, creating a dangerous cycle [47].

Using laxatives for weight loss can lead to changes in the digestive tract, such as potassium deficiency and acid/base imbalances. Abuse of laxatives may also cause structural changes in the cells lining the colon and, in some cases, allergic reactions [48, 49].

The risks far outweigh any temporary benefits of using laxatives for weight loss.