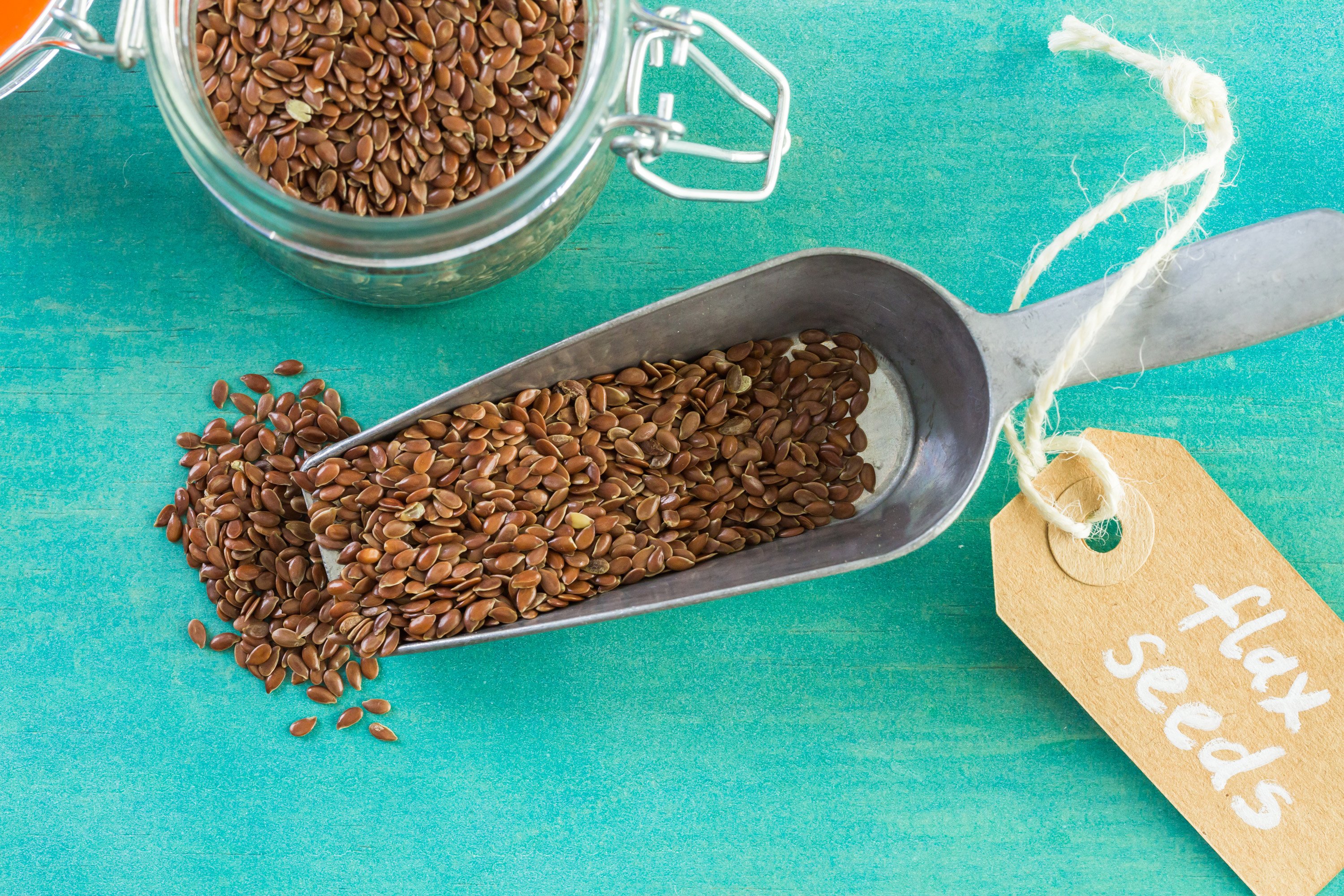 Flaxseed oil is one of the best plant sources of omega-3 fatty acids. It may improve heart, skin, gut, and brain health, though much more research is required. How might it work, and how good is the evidence? Find out here.

What Is Flaxseed Oil?

For many centuries, people used flaxseed for its laxative properties. It is also used in bakery products, and its fibers are spun to make linen [4].

The alpha-linolenic acid (ALA) from flaxseed oil is converted in the body into the unsaturated fatty acids, eicosapentaenoic acid (EPA), and docosahexaenoic acid (DHA) [5].

These unsaturated fatty acids are then converted to lipids (fats). The fat molecules promote eye health as well as brain and nervous system development. They also reduce the risk of high blood pressure, high cholesterol, and cancer, improve memory, and slow aging and risk of coronary disease [5].

Eating flaxseed in both ground and oil forms increase blood ALA. However, consuming flaxseed oil rather than ground flaxseed results in significantly higher ALA levels in the blood [6].

The potential benefits discussed in this section have at least one human trial to back them up, but either the results haven’t been repeated or the evidence has been contradictory. Much more research is required to determine whether flaxseed oil is effective for any of these purposes, and better alternatives are available.

It’s important to note that the FDA has not approved any flaxseed product for any medical purpose or health claim. Flaxseed is a safe component of many foods, but we still recommend talking to your doctor before using it as a supplement.

In a study of 56 participants, a 3-gram daily supplementation of ALA (from flaxseed oil supplements) increased blood EPA levels. These levels grew 60% after 12 weeks in comparison to the placebo group, which showed no EPA increase [7].

In the human body, ALA from flaxseed oil is partially metabolized into EPA and DHA. The FDA has recently approved health claims that omega-3 fatty acids (EPA and DHA specifically) may reduce the risk of high blood pressure and heart disease [8, 1, 9].

In a review of 28 studies, the authors suggested that flaxseed oil slightly lowers the amount of total and LDL (bad) cholesterol in the blood. However, the amplitude of the effect was dependent on the sex and health status of participants [10].

12 months of high flaxseed diets also lowered LDL and total cholesterol in 110 heart disease patients. However, the degree to which flaxseed’s oil was responsible is unclear [11].

In hamsters, flaxseed, but not flaxseed oil, prevented cholesterol increases, casting some doubt on whether the oil alone could be useful [12].

The best results for cholesterol in both animals and humans have been achieved with ground flaxseed or flaxseed extract, not flaxseed oil. This suggests that non-fatty flaxseed compounds (for example, its fibers) could be responsible for this potential benefit. Additional human studies will be required to clarify.

Dietary ALA deficiency is associated with dry and uncomfortable skin and poor skin quality in humans. Flaxseed oil is rich in ALA and improved skin sensitivity and hydration in a study of 13 women [13, 14].

In another study of 45 women, flaxseed oil ingestion for 12 weeks reduced skin redness and roughness [15].

Flaxseed oil has a high ALA content, which decreased skin cell inflammation and promoted regenerative functions in a cell study [17].

Flaxseed oil is believed to help with constipation [18, 19].

In a study of 50 patients, daily supplementation with 4 mL of flaxseed oil helped relieve constipation [20].

It is currently unclear which components of flaxseed might be responsible for these effects. Further human trials are needed.

In a study of 30 healthy adults, ALA supplementation increased BDNF levels. BDNF is a vital growth factor for neurons; the authors of this study concluded that ALA is worth studying in the context of stroke recovery [22].

As with many of the potential benefits of flaxseed oil, many more human trials are required.

Other Potential Benefits with Insufficient Evidence

Individuals with PCOS tend to have high insulin and glucose levels and may be at higher risk of diabetes. In a study of 60 women with PCOS, flaxseed oil supplementation had beneficial effects on insulin metabolism [27].

However, in a study of 90 prediabetic individuals, flaxseed powder had no effect on their glucose levels or insulin resistance. These mixed results indicate the need for further human studies on the various components of flaxseed (powder vs. oil vs. extract, etc.) in people with specific health conditions [28].

In a study of 100 patients with carpal tunnel syndrome, the patients reported an improvement in their symptoms after topical flaxseed oil application. They had reduced inflammation and pain after a month of oil application [29].

In rats, flaxseed oil injections under the skin helped reduce inflammation by preventing the widening of blood vessels. It also decreased inflammatory markers (histamine, bradykinin, prostaglandin E2, and leukotriene B4) [30].

In a pilot study of 30 children with ADHD, supplementation with flaxseed oil and vitamin C improved their ADHD symptoms and increased their EPA and DHA levels. The children had improved restlessness, inattention, self-control, and impulsiveness [31].

In a study of 140 menopausal women, flaxseed oil supplementation improved their menopause symptoms. The women reported less hot flashes and an increase in quality of life [32].

In a study of 100 patients with carpal tunnel (many in both hands), topical application of flaxseed oil significantly reduced reported symptoms and improved joint function [29].

In a study of 60 patients with diabetic foot ulcers, 2 g of flaxseed oil per day (in addition to conventional antibiotics) improved speed and quality of healing compared to conventional treatment alone [33].

Sjogren’s syndrome is an immune system disorder with uncomfortable symptoms of dry eyes and a dry mouth.

No clinical evidence supports the use of flaxseed or flaxseed oil for any of the conditions listed in this section. Below is a summary of the existing animal and cell-based research, which should guide further investigational efforts. However, the studies listed below should not be interpreted as supportive of any health benefit.

Diets deficient in ALA have been associated with increased bone resorption and osteoporosis in humans. Since flaxseed is one of the best sources of dietary ALA, some researchers have suggested that flaxseed could help maintain bone health [35].

In mice that consumed a diet high in flaxseed oil, the oil appeared to help maintain bone strength. It prevented bone loss caused by drug treatment for IBD [36].

Leptin is a protein that is produced by fatty tissue in the body. Low leptin signaling results in overeating. Over time, this can lead to becoming overweight or obese [39].

In a rat model of kidney dysfunction, both flaxseed oil and ground flaxseed supplementation helped prevent the decline in kidney function. However, the ground flaxseed was more effective at protecting against kidney injuries than the oil [42].

Flaxseed oil diets also helped reduce polycystic kidney damage in male and female rats, although it was more effective in female rats. A combination of flax oil and one of its antioxidants (SDG) prevented excess protein in their urine, cystic change, and inflammation in both genders. However, females also had less oxidative damage [43].

Both flaxseed and flaxseed oil contain linoorbitides, a family of compounds that have possible cancer-fighting and antioxidant activities. This compound family increases the shelf-life stability of flaxseed oil in storage. It likely does the same within the human body, providing strong antioxidant properties that lower the rate of tumor cell growth [45].

Though flaxseed oil contains a compound that prevents cancer, the quantity, and frequency necessary to achieve the desired blood concentration may not make it a useful therapy in cancer treatment [53].

Higher omega-3 fatty acids levels are associated with a slightly longer bleeding time and slower clotting time. However, there are no cases of bleeding problems documented, even at high levels of omega-3 and when taken with blood-thinning medications [54].

When first taking flaxseed oil, some adults who took more than 6 grams per day experienced stomach and intestinal discomfort [6].

Additionally, some people may be allergic to flaxseed [55].

Flaxseed contains small quantities of cyanogenic glycosides. In typical dietary amounts, however, flaxseed will not produce enough thiocyanate (a precursor to cyanide) to be dangerous [4].

In a study of 60 diabetic patients with heart disease, 12 weeks of flaxseed oil supplementation increased the expression of genes related to insulin, inflammation, and fat. It increased PPAR-α levels, which helps with insulin and fat metabolism and maintains fat and glucose balance [56].

Meanwhile, it reduced inflammation and heart disease risk by decreasing the gene production levels of [56]:

In diabetic rats, a diet high in flaxseed oil significantly increased PPAR-α levels. This helps maintain carbohydrate and fat balances. On the other hand, it reduced SREBP-1, which reduces the rats’ fat levels [57].

Although many animal studies have been performed, there are limited human studies of flaxseed oil. Thus, it is recommended that you consult with a doctor before taking flaxseed oil supplements for their health benefits.

Do not take flaxseed oil if it is rancid or expired, as it can potentially become toxic.

There is no safe and effective dosage of flaxseed oil for any health claim or medical condition, because no sufficiently powered clinical trial has been conducted to find one. That being said, flaxseed and its oil are considered safe for consumption as food, and clinical trials have produced positive results with few side effects.

The recommended daily amount of alpha-linolenic acid from the diet/supplementation is 1.1 – 2.2 grams per day [59, 60].

However, a medical professional may recommend higher amounts in some cases. If you have a specific health concern or disorder, talk to your doctor before taking flaxseed oil [59, 60].

Both flaxseed oil and fish oil are rich sources of omega-3 fatty acids. Fish oil has EPA and DHA directly to the blood and body. Flaxseed oil has ALA, which is then changed into EPA and DHA within the body [62, 63].

However, for vegetarian or vegan people, flaxseed oil could be a way to meet omega-3 daily needs and receive the positive effects of omega-3 fatty acids and lignans.

CBD Oil for Arthritis: Does It Work & How Can You Use It?